So it snowed yesterday, and of course the whole school system shut down. [I will have to make up this day, because as a day laborer I am paid to be onsite for 180 days, whether or not there are children to be taught or work to be done. But let that pass.]

I’ve gotten a lot done today, most of it involving driving back and forth to Michael’s no fewer than three times. Don’t ask. But the original plan for the labyrinth is now framed, as is the photo of the roller coaster where we spent our wedding night.

I piddled around with a short story that crawled into my head a couple of weeks ago. I’m not sharing anything about them till they’re finished, if ever. Short stories have not been my métier heretofore. It doesn’t have a title. We can call it “Swimming,” if you like.

And finally, finally, just a few moments ago, I began a painting that started bugging me on Saturday.

Here’s the deal: the New York Times offers for sale prints of photos from their archives. Here’s the one that jumped out at me:

It’s of skaters in Central Park, 1884. That’s the Dakota apartment house in the background, reigning in solitary splendor on Central Park West.

I don’t know why this idea popped into my head, but it suggested itself to me that I should clip this thing out of the newspaper, attach it to a board, and then paint over it, exploring its composition as an abstraction. What do you think? 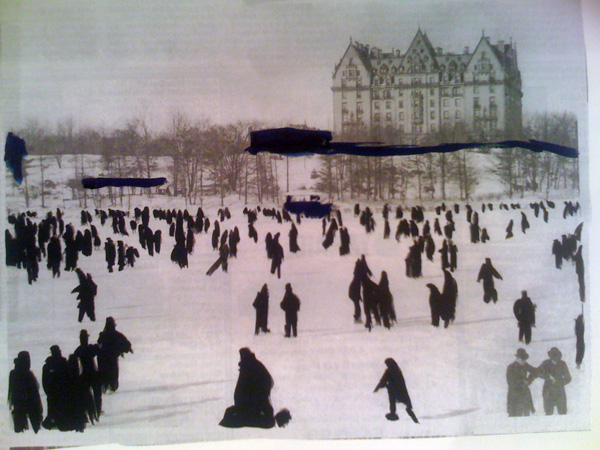 Here are my thoughts so far: a large whitish field on the bottom half, blackish hieroglyphics scarring the surface. A hot gray stripe above that, cooler gray swath above that. Above that, I don’t know yet. Blocks of Prussian blue. Vertical scrapings across the cool gray swath. I don’t know about the Dakota yet. Browns will begin to figure into the composition at some point.

I’ve begun by simply blacking out the figures, then blocking out some items in Prussian blue. I’m of half a mind to leave the two men in the lower right corner.

Back to the painting. 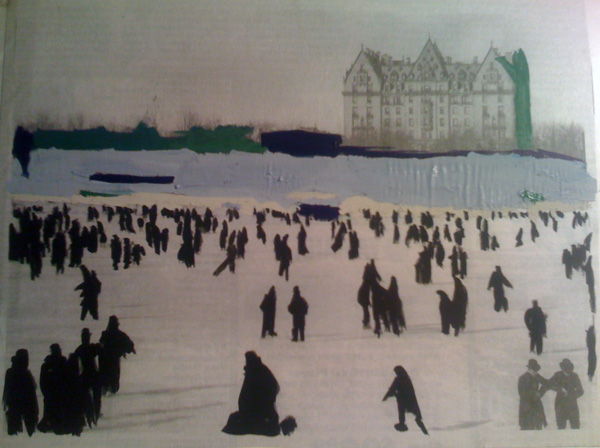 Now I’m curious about when the black marks down front are going to stop looking like humans. 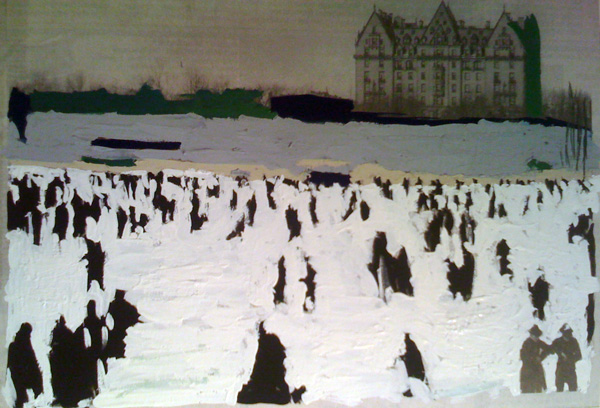 What am I to do with the Dakota?

One thought on “A day off”