I spent yesterday afternoon playing with the labyrinth, laying out some stones to see how to proceed. 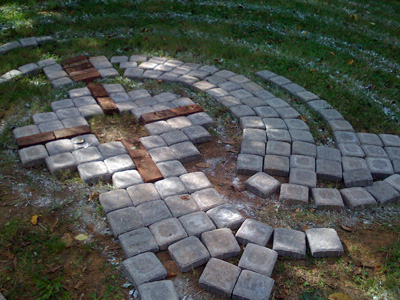 On one half, I paved the path. You can see already that it’s going to require a lot of cutting and fitting. I would probably have to acquire a saw capable of cutting curves, since the center is supposed to be a circle. Of course, I could settle for a table saw to make straight cuts, which would be most of the cuts I’d need, then find someone who could make the dozen or so curved cuts for me.

The cost would be unconscionable as well. I can’t really justify spending what I spent on this one pallet three more times. The stones you’ll see in these photos are about half the pallet!

The time factor is negligible. I quite enjoy getting to work on it, and it is certainly Lichtenbergian in its time-wasting potential. So what if it takes me over a year to complete it? It’s not San Simeon, but it will do. 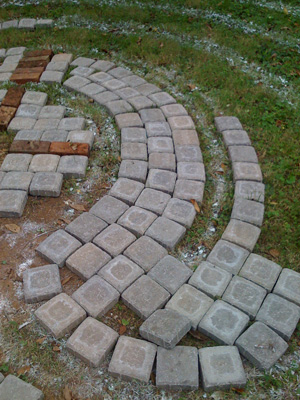 Here’s another shot of the paved paths. There would be a certain grandeur to covering my back yard in 6″ paving stones, to be sure. I’d essentially be creating a patio, wouldn’t I?

It also would be better, as Mike pointed out in comments previously, to have a stone path for barefoot walking. It would be a lot easier to sweep acorns, twigs, and pecans off the stone path than try to get them out of grass or mulch.

You can see in this shot how many curved cuts would be needed over on the center.

Design note #1: See where the outline comes down and stops at the turnaround at the bottom of the photo? In a perfect world, I’d run power under this thing and have an embedded light at the endpoints of the outline, something like a glass sphere lit from underneath. There are four of these endpoints. 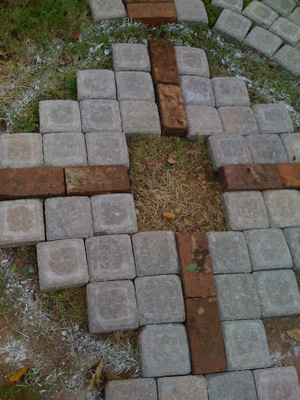 Design note #2: Here we are at the center. I spent some time yesterday clearing away debris and vines from the pile of bricks over in the corner of the yard, because it dawned on me what a good design resource they’d be here. Here I’ve placed bricks on the four cardinal lines of the compass. Notice I’ve left the center blank. I’m going to have four more stones there, with a circle cut out. I’ll dig a hole in the center and put a bowl in it, black, maybe blue (yes, with drainage holes). The circle stones will overlap the bowl, and there in the center of the labyrinth we’ll have a nice omphalos. It might be interesting to fill it with water, for example, or to have a candle in it. Again, in a perfect world, we could place lights under the rim.

No matter whether I pave the paths or pave the outline, I’m going to have to have the curved cuts made for the center stones, just because the center has to be round. Why? Because I said so. 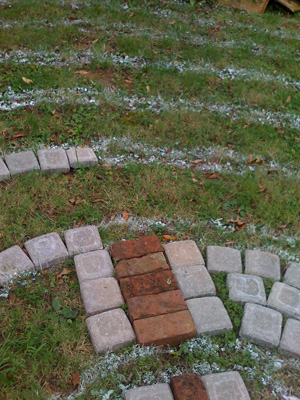 Design note #3: I decided I could break up the endless gray path with quick bands of brick.

I could do that every x number of feet, which, given the topology of the path, would look random, or I could do it in some pattern.

At the moment, I’m thinking I’m going to do it on the western axis, those great back-and-forth sweeps that form the visually uninterrupted arc of the top half. (The bottom half gets all tumultuous with switchbacks.)

Even if I don’t pave the paths, I could do the brick inserts in the path as a design thing.

After all I got all the stones laid out, it was still early and I was enjoying being all sweaty and semi-naked in my shorts, so I went to uncover the brick edging around the back of the yard. Didn’t know there was brick edging? That’s because it’s been covered with an inch or so of dirt and over grown with ivy. Like the brick walkway up top, it’s not hard to reclaim, although it’s a little more work than the walkway because I have to get rid of the ivy as well. 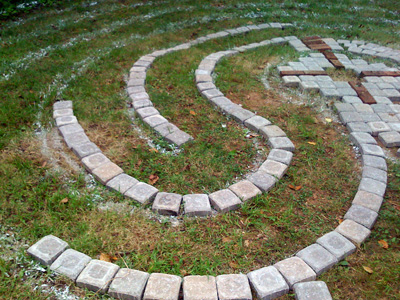 Here’s the other half of the labyrinth, where I paved the outline.

There’s a lot that’s appealing about this approach. First, the expanse of green is soothing, although of course in the winter it wouldn’t be green.

Second, it would be dead easy to accomplish. I could rent a trench digger and be done in a couple of days, rather than a year and a half.

Notice how the entire labyrinth will be slightly smaller than my spray-painted guidelines. That was a quick and dirty layout just to see if the whole thing would fit, which it just did, barely. It’s good that it will come in by a foot or two.

Now to the problems with this approach. As I’ve mentioned repeatedly, keeping the path clear would be a bitch. We’d just have to accept that sandals are permissible for barefoot walking.

Getting grass to grow in the back yard has always been tough, although I’ve never really put any concentrated effort into it. Consultation is called for. I know, though, that we’re talking a lot of tilling and amending of soil even to get started. (I’m going to have to till the whole area anyway, in order to level out some of the irregularities.)

Also, with a paved path, mowing the outline would be easy: just follow the outlines, and the mower just scoots along on the path. Mowing the path, however, would be more of a problem, since the lawnmower is wider than the path. I’d have to make sure the whole thing is level, so I could try to mow over the whole thing. My experience with my brick edgers, however, suggest that this doesn’t really work.

Keeping the weeds at bay with paved paths would be easier as well: just spray Round-Up on the paths. Keeping the outlines weed-free would be a lot harder.

So, I have choices to make. Next weekend, perhaps.