We slept in. Grayson came to the hotel, then off we went.

Our hotel is the Creatif Hotel Elephant. We chose it on the internet because the price was right, the location was good, and the design was irresistible. Here’s the exterior: 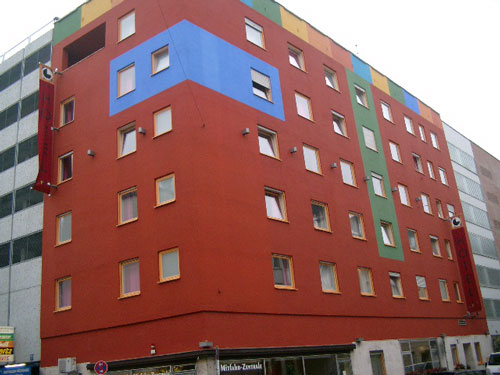 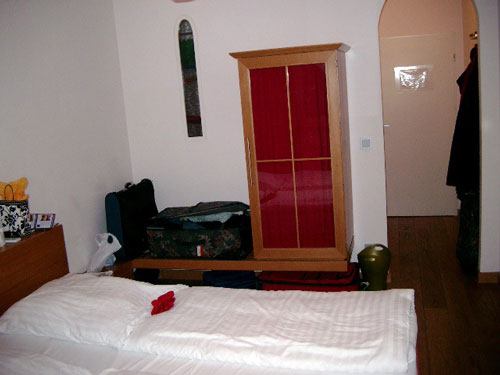 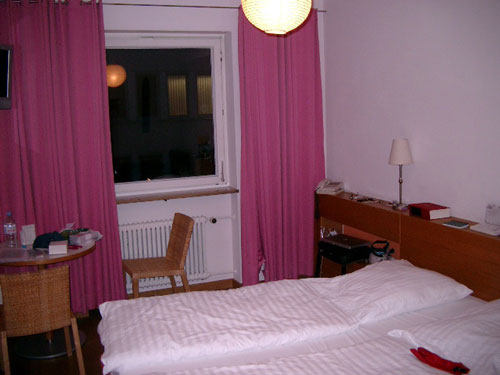 As it turns out, we like the Elephant very much. The room is very comfortable, with the duvets actually being a perfect sleep situation: we each have our own, so there’s no tugging at the sheets. The neighborhood is relatively quiet (although as Grayson pointed out, there is not much traffic to begin with and certainly none after 10:00.)

The staff is friendly; their English is good, and they don’t laugh too much at my German.

First we hit the Hauptbahnhof, right across the street almost, for breakfast and ATMs. I had a chocolate croissant, which I didn’t realize meant “with thick, goopy chocolate huddled at the end of the croissant.” Chocogoop, mmmmm.

Our agenda of the day was museums, specifically three of the four major museums. We took them in chronological order, starting with the Alte Pinakothek. This is the early Renaissance to late 18th century stuff, including the largest collection of Rubens on earth. Apparently, according to our tour guide Grayson, the whole museum was built around one gigantic Rubens, the centerpiece of the central hall. It’s about 30 feet tall, depicting the reward of the virtuous at the Last Judgment.

No world-famous works here, except maybe the Dürer panels of St. Matthew and Luke. Still, seeing such great work is still an education for the eyes and brain.

The museum itself (no picture; at this latitude the sun is always behind it) is magnificent: one long gallery of huge rooms on the back of the second floor with a secondary gallery of much smaller rooms (and smaller works) across the front. The exterior is therefore a long, thin building, fronted like a palace.

To get to the gallery, you climb this gigantic double staircase which was tacked on to the back of the building in the 1950s as they were rebuilding it. (Yes, we bombed the place. At least it could be repaired, with brick that deliberately does not match the original; its partner, the Neue Pinakothek across the street, was completely destroyed. Its building is modern.) The effect of the staircase is quite nice: the former back of the building was left, the brick scrubbed, the architectural detail mirrored on the new exterior wall. It’s quite a post-modern look.

Next was the Neue Pinakothek. Most of this was worthless 19th century Academic crap. I am not over-exaggerating. When we got to the period where they decided the best thing to do was to fall back and copy the Renaissance masters, I just started walking through the rooms without paying much attention.

Finally we hit the room where the late-19th century began to fall apart, and the art once again became interesting. You could tell that someone had been to Paris and seen what was going on. There were a handful of the French.

Lunch was at a little Italian place near the museums. Ginny said her spaghetti was good. My lasagne was not quite what we’ve been taught to believe Italian cuisine is like, nor was it warm.

Third and last on the day’s agenda was the Lenbach Haus. Herr Lenbach was a portrait painter of the gilded age, and he built himself this quite large Italianate mansion. It now houses the Blaue Reiter group, plus exhibits of new, and here I mean new, stuff.

The exhibit was very nice, showing the growth of the Reiter style through Kandinsky’s work and that of his lover and their best friend couple, none of whose names I remember. As they picked up adherents, those paintings joined the walls. I was delighted to see Paul Klee, one of my favorite artists.

After the three museums, I was parched, so we went to a bar and quenched our thirst before setting out for supper. This was at a restaurant recommended by our hotel, the Al Teatro, which true to its name was next to a Fox-style theatre. A show called Miami Dance was playing, and it looked truly trashy. However, Grayson resisted seeing it, too gay or something, so we ate and let him hit the bus to go home.

We headed back to the hotel and were soon asleep.