At least one of the travel websites we’d gone to said to declare any electronics before leaving the country so that Customs wouldn’t give you a hard time when you brought them back in.

So after we made it to Concourse E, I went to do so: back down the escalator, where there was no visible office for Customs. At information, I asked and was given a paper slip, a pass to get to the Customs office. Where was it? “Around the glass.” I fumbled my way down a glass corridor, where a TSA lady sat at an office desk plopped in the middle of a hallway.

She looked at the pass, called on her walkie-talkie for a supervisor. Eventually one showed up. I needed to go to the Customs office to declare some electronics, I said. You don’t need to do that, he said.

Oh, OK. As we began to move back, I asked for his name, suggesting that it would come in handy if I were in fact hassled on my return to the country.

Well, we’re just TSA, he said, we have nothing to do with Customs. I need Customs, I said, I told the lady I needed Customs. Around there, he said.

On I went, allowed through two little stanchions by a polite TSA lady. Into the Customs office I went, where I was told by the Customs man that I could declare them if I wanted, but it wasn’t really necessary any more.

So back I went.

Only I was now in the international transfer area, and to get back to the other side, I had to once again go through security. I asked the polite lady who had let me through if she could let me go back through, but no, I had to do the whole security thing.

In my case, it’s not only the shoes and the jacket and the personal effects, it’s the laptop (out by itself) and my carry-on bag and my C-PAP, which is in the carry-on bag and has to come out. It takes three trays, plus the bags.

I get all the way through and am waiting for the final item, when here comes a TSA person with my C-PAP. Is this a breathing machine, he asks? Yes, of course. It has to come out of its case. Don’t touch it. You have to go back and unpack it and send it through. It’s the new policy.

New since ten minutes ago upstairs? When I went through upstairs, no one was aware of this new policy. So back I went, leaving my laptop and everything to the mercy of the continuing flood of international drug lords coming through.

He plopped the C-PAP case and a tray down and walked away. I peremptorily called him back to ask exactly what had to be unpacked. He pointed to the reservoir. I asked if he didn’t mean the motor part. He mumbled. I took both of them out. The next guy told me only the motor part needed to be out, and waited until I repacked the reservoir.

Finally I was through and began repacking all my crap. I was down to my personal effects, and that’s when I noticed my passport was missing. I was about to blow my stack when the first guy came back, bearing it.

Grr. It is no wonder that undercover people from the GSA were able to sneak bomb parts past security in all 19 airports they tried it in. They are inefficient and inconsistent.

An uneventful flight. The dinner was not bad. We watched Hairspray on the little monitors, and it was entertaining, although I was not convinced by Travolta in drag. He seemed to be in another movie altogether; his accent especially seemed more authentic than the rest of the cast was willing to commit to.

Fitful sleep, of course, and we arrived in Munich about 20 minutes late, 8:11 CEST.

There is no child to greet us, needless to say. He had all the information he needed, and at this very moment it is one hour past our original arrival time. I imagine he will wish he had written down all the info I’ve sent him over the past few weeks, like the hotel we’re staying at. There is no internet access here at the arrival gate. We may actually have to wait until we abandon hope and go to the hotel to email him and catch him up to speed.

Ginny has wandered off to the shopping area to see if she can find a cell phone for the week. I wish we had a camera crew with us; she has absolutely no German.

Soon we will have to figure out how we’re getting to the hotel on our own. An adventure!

It seems that the child had already booked an adventure with friends. He didn’t know exactly when or even what day we were coming in. (Can I show you the emails?)

We took a cab, which was stupid and very expensive. We’ll be taking the train back, needless to say.

The hotel is small and funky, very cute. Our room was not going to be ready until 2:00, so we left our luggage and headed out to see what we could see.

We managed to make it to the Marienplatz in time to hear the newly restored Glockenspiel play, with its double-tiered parade of carved characters. The Neue Rathaus in which it perches is an excessive pile of late Gothic civic pride: 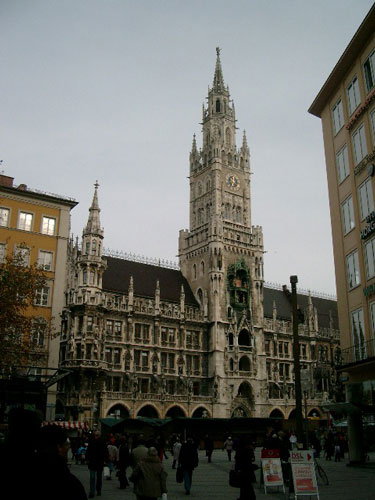 We saw three major churches, each a different style: Peterskirche, majorly roccoco; Frauenkirche, quiet neoGothic; and Michaelskirche, a tremendous baroque effort. (I have no pictures. I don’t know why.) The Frauenkirche’s chorus and orchestra were rehearsing Bruckner’s Mass in F, which they performing tomorrow night. We may attend. It is gorgeous, especially in a space with a 5-second reverb.

We also stumbled across what passes for the Apple Store. Whee! I went in to play with the new operating system, Leopard, my first chance to do so. Very cool, as advertised. I tried to pull up this blog, just as a mark-leaving kind of deal, better than tagging buildings, I dare say, but that particular iMac was not hooked up to the internets. (Not really an Apple Store, was it?)

We finally wound our way back to the Creatif Hotel Elephant, where we found that someone had been looking for us, fruitlessly. Good. Serves him right.

After a nap, I finally got in touch with the child. He came back in from his suburban home and we walked the city with him, getting history and art along the way. We ate at one of his favorite restaurants, where the food was good if not exactly cheap. (Is anything here cheap at this point in history?)

He took great delight in correcting my faltering German, and especially clueing us in to the social niceties. Not just nochmal gin und tonic, but nochmal, bitte.

Overall: Munich is a beautiful city. Ludwig I did a massive building job post Napoleonic Era, and even after the city was bombed to bits in WWII, they rebuilt it all.