Another good night at workshop.

Tonight we brought in our visuals for Man in the Marmalade Hat and Two Sunflowers. Laura had the two sunflowers on a blue sky/carpet with the traveling troupe behind them, and in front, an angel pulling turtles on wheels. (The last one was facing backwards.) She had a window with the sun streaming through; Marc shared a similar sketch of a window. We discussed using a gobo to project the sunshine onto the stage. 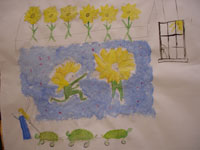 Here’s Laura’s visual. You can click on it to see a larger version.

I had my visual for Marmalade Man, and we talked about “straightening the road” by shifting the snow drifts around. Also, the green spring fabric would flow from behind the drift cutouts. 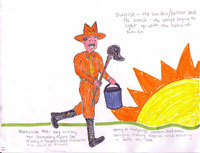 Melissa had her annotated drawing of the Marmalade Man. She said she kept seeing the Man in the Yellow Hat from Curious George, so she colored him orange and gave him a moustache, which we all quite liked and decided to enlarge even further. 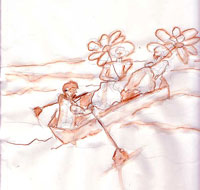 Marc had a sketch of the Two Sunflowers being rowed in a boat (feeling the slow beat of the waltz, I presume). We talked about whether or not the chorus would be the characters and decided that the chorus ought to be onstage and part of the action whenever possible, but that it was just as viable to have dancers doing the Sunflowers, for example, while singers stood in full view and sang.

Laura said she had thought of making the turtles umbrellas, and this led to a discussion of motivic design elements: angels, umbrellas, sun/moon. We also thought of using similar elements as building blocks for some set pieces. For example, a flock of brown umbrellas could be opened and arranged to form the hedgehogs’ “hollows and holes,” from which they roll out.

Marc then revisited the idea of children arriving at the Inn, each clutching one of our motivic building blocks: umbrella, suitcase, book.

We then began to play with hedgehog choreography. Eventually we were scuttling around the room, earning snickers through the glass of dancers on break from the next studio.

After we blocked out a basic marching drill for the hedgehogs, we then revisited it for the first verse, wherein the Usual Gang is dragged from their beds to march. They do a very clean, martial version, setting up the ultra-cute hedgehog version for the second verse.

We should have gotten photos/video of us working on the hedgehogs. Someone needs to be making a documentary of this.

Assignment for next week: play with traveling sunflower choreography; begin to firm up which piece(s) we’ll perform live; generate items for the “We Need This” list.