You know how it is, the endless performances and appearances that make life such a grind.  This weekend, for example, I had two galas to attend, both on Saturday night.

Fortunately, they were right across the street from each other.  Backstreet Arts, the dream of Kim Ramey, opens its doors next week, and started its gala at 7:00.  Newnan Theatre Company, my old stomping grounds, started its gala at 8:00.  So this was not a problem, despite the fact that as a performer I was supposed to be backstage at 6:30.

The purpose of the NTC gala was to announce the 2017–2018 season, i.e., the season that begins in August and runs through next year.  I will be directing Rick Elice’s Peter & the Starcatcher, the dazzling, touching story of how a nameless orphan boy became Peter Pan.  It auditions a year from now and opens March 8, 2018.  Mark your calendars.

Here’s my intrepid cast, who performed the Prologue and a slightly modified Scene One:

We had a great time slamming it together in two rehearsals, and the audience seemed to love it.  I’ll be blogging about my progress in preparing for the full production over at Lichtenbergianism.com, where I will be showing how the Precepts of Lichtenbergianism are used in practice.

I would offer to share with you the entire season, but for some reason involving schlepping back and forth between the two galas, I didn’t quite catch the whole thing.

Backstreet Arts was actually a two-parter.  There was the gala on Saturday night, then an open house on Sunday afternoon.  The following photos are from the open house. 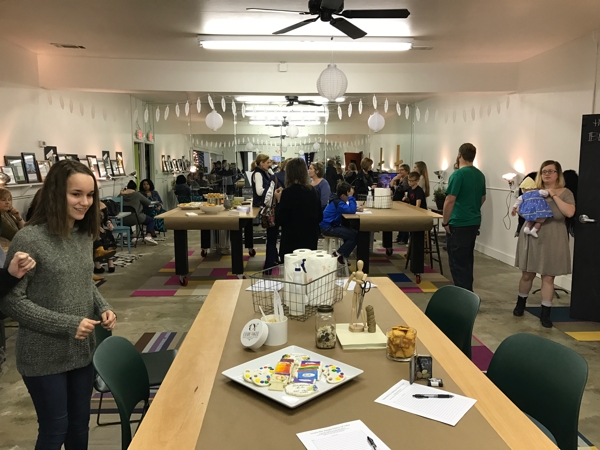 The gala was swanky and elegant.  The open house was casual and open to the public.  Those of us who are going to instruct/assist/encourage anyone who walks in the door set up sign-up sheets for everyone.  The space is large, clean, beautifully appointed. 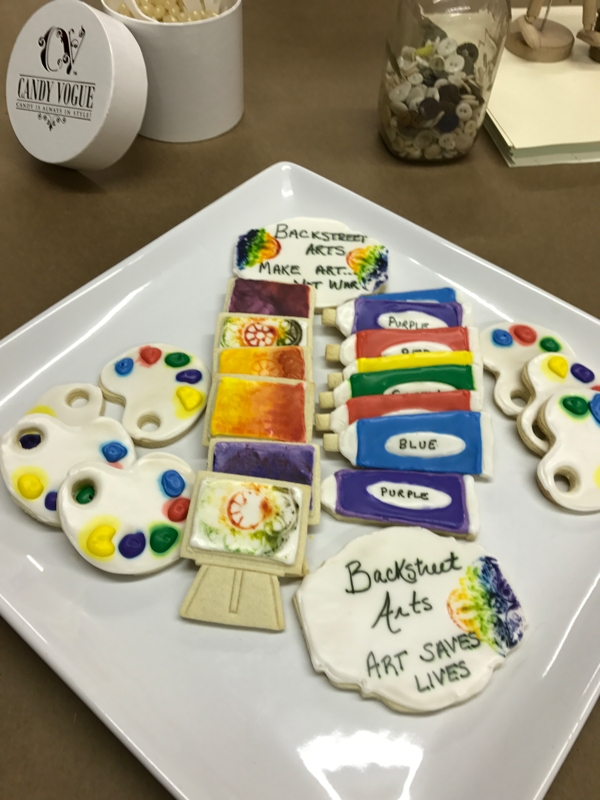 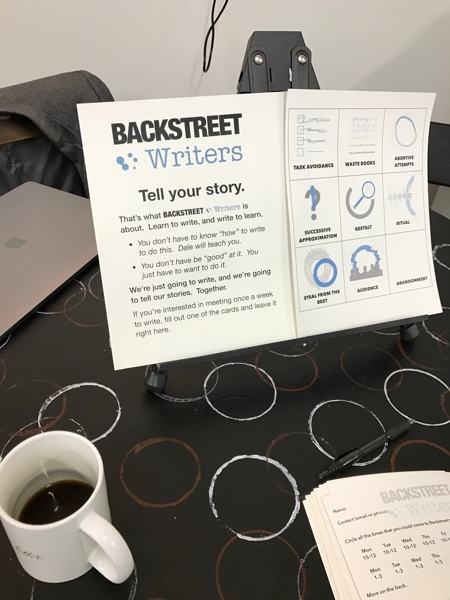 I got five or six cards, and I’m sure that once Backstreet is fully open for business, we will slowly build a walk-in clientele from Bridging the Gap, the back of whose building we occupy.

And that’s what I did with my weekend.

You should do these things.

This Sat, Jan 21, at 8:00, the Newnan Theatre Company will announce its 2017–18 season.  I will be directing the big spring show, [redacted].  No, the name of the show is not [redacted].  The name of the show is literally redacted, since it hasn’t been announced yet.  But I am directing it next year and will be directing a scene from it for the Gala.  (I will also be appearing in it, since apparently there are not eleven males who could give up four nights in their total life to do this scene.  I’m not bitter or anything.  Yet.)

Backstreet Community Arts (full name) is ready to open its doors, and to celebrate they too are having a gala.  And how convenient is this?  It’s across the street and about the same time as NTC’s!  (Both were trying to avoid competing with Newnan’s Burns Supper on the next weekend, and so they ran headlong into each other.)  That’s Sat, Jan 21, at 7:00—so you could start at Backstreet and end up at NTC.  I understand there will be a signature cocktail, which I did not create.

Then on Sun, Jan 22, 2:00–4:00, Backstreet will have an open house so you can come and meet the artists who will be offering classes/workshops for the target population.  At both events you can give money to help support this group’s mission, which is to provide space, supplies, and instruction for those in our community who would not otherwise have the opportunity to express themselves through art.

I will be there because I will be starting the Backstreet Writers.  Inspired by some of the work of Temporary Services in Chicago, I want to see if I can provide a venue for people to tell their story.  That’s all I have at the moment; since I don’t know who will be interested enough to attend any seminars, nor their skill level, nor anything; all I can do is say that I’m doing this thing, welcome anyone who shows up, and then meet their needs however I can.

You will recall that this project is actually one of my Lichtenbergian Proposed Efforts. I will write in more detail about my thinking about this tomorrow.  In the meantime, here’s a photo of me that Kim Ramey took up against her angel wall: 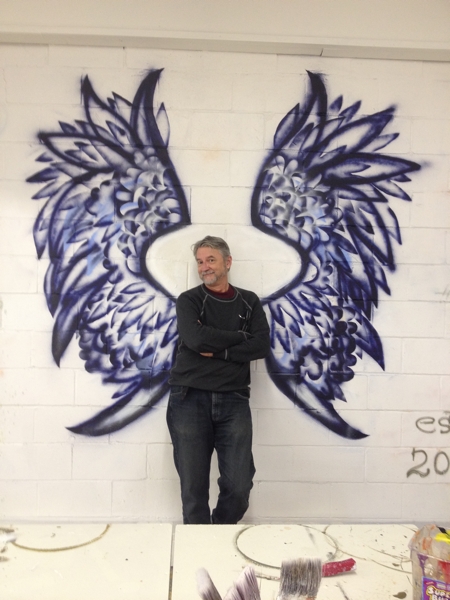 You see why you want to be there.

This item was forced on my attention the other day, and I just clicked on BUY. 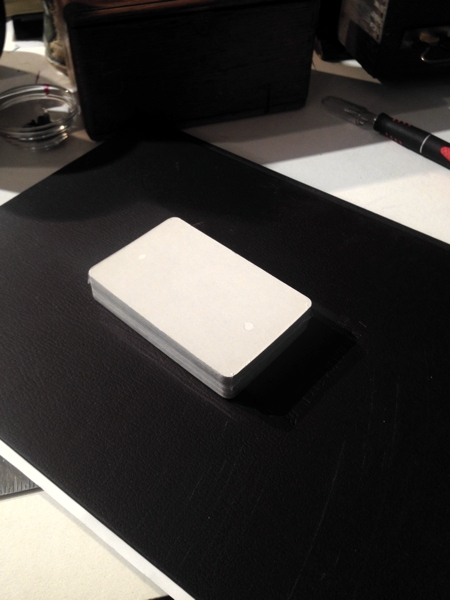 It is a deck of blank cards. 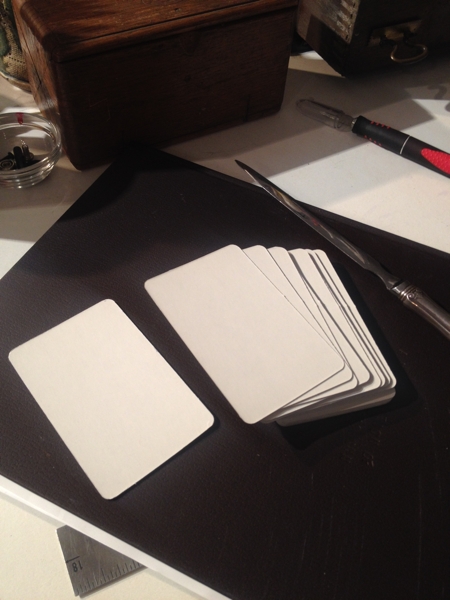 I don’t know what I shall do with them.  The surface is too glossy for pencil or crayons.  Perhaps collage.  Markers, I guess.

But what is to be done with them?  A whole set of images/things/something?  Or do I just whip one out and do a one-off creation for specific events?

A lot of my vague ideas revolve around this book: 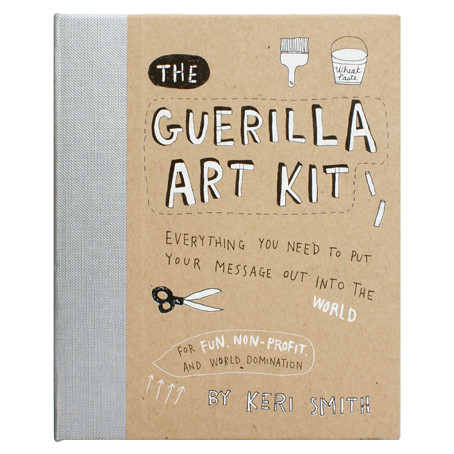 Fox News Asks Whether the Statue of Liberty is ‘Transgender’

Merciful Cthulhu, conservatives, that’s not how art works.  Here, let Wallace Stevens explain it to you:

It does not freaking matter if Bartholdi used his brother instead of his mother as the model for the statue.

Let me repeat that for the hard of thinking: It does not freaking matter if Bartholdi used his brother instead of his mother as the model for the statue.

He did his sketches, and he MADE THE THING THAT IS NOT.  Those of us who are sane, who know that art is newness, and that it is not in service to your ideology, know that it does not freaking matter if Bartholdi used his brother instead of his mother as the model for the statue.

How art works has nothing to do with your fear of other people’s dangly bits.

That is all.  Go read about art: Lichtenbergianism.com

I am trying to sketch a visualization of William Blake’s Inn nearly every day, but what that means is that I’ve been staring at a collection of raw materials on my drafting table every day, and today I was forced—forced, I tell you—to create an Artist Trading Card [ATC].

Here’s the main idea, from a post I wrote several years ago.  (tl;dr: 2-½ x 3-½ cards, decorated and labeled, then traded or given away.)

I doodled with some a couple of years ago: 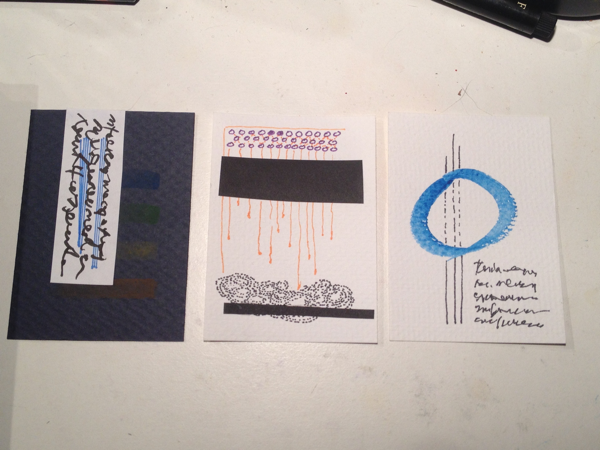 These were labeled as Destructive Series; there were more, but I’ve given them away.  The concept for these was to splash out some kind of Abortive Attempt onto the card, then “destroy” the image by blanking part of it out with glued-on paper.  (The third one turned out so nicely that I didn’t destroy it.) 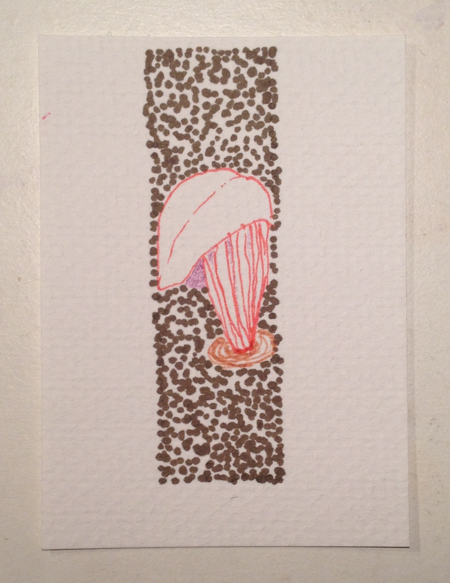 The end of the Prelude: 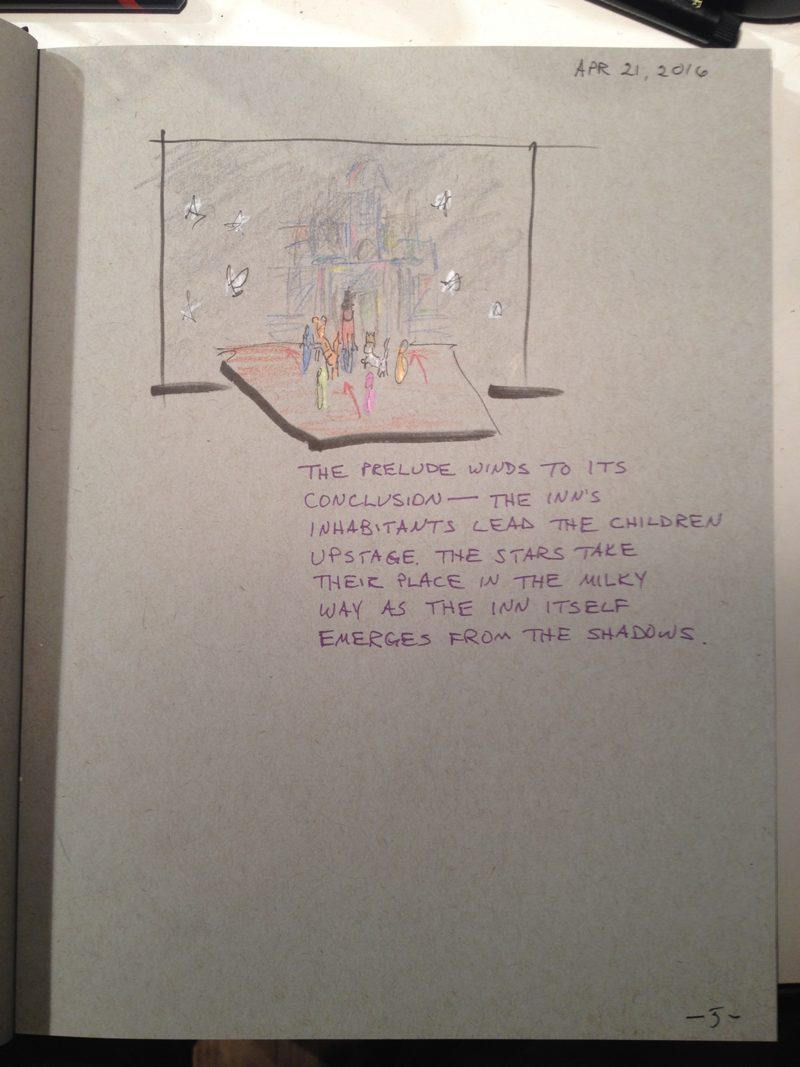 The final 20 seconds or so…

As always, if these Abortive Attempt images intrigue you to the point that you want to know more about William Blake’s Inn, have at it.

More imagery of what my song cycle William Blake’s Inn might look like if some enterprising theatre company decided to stage it: 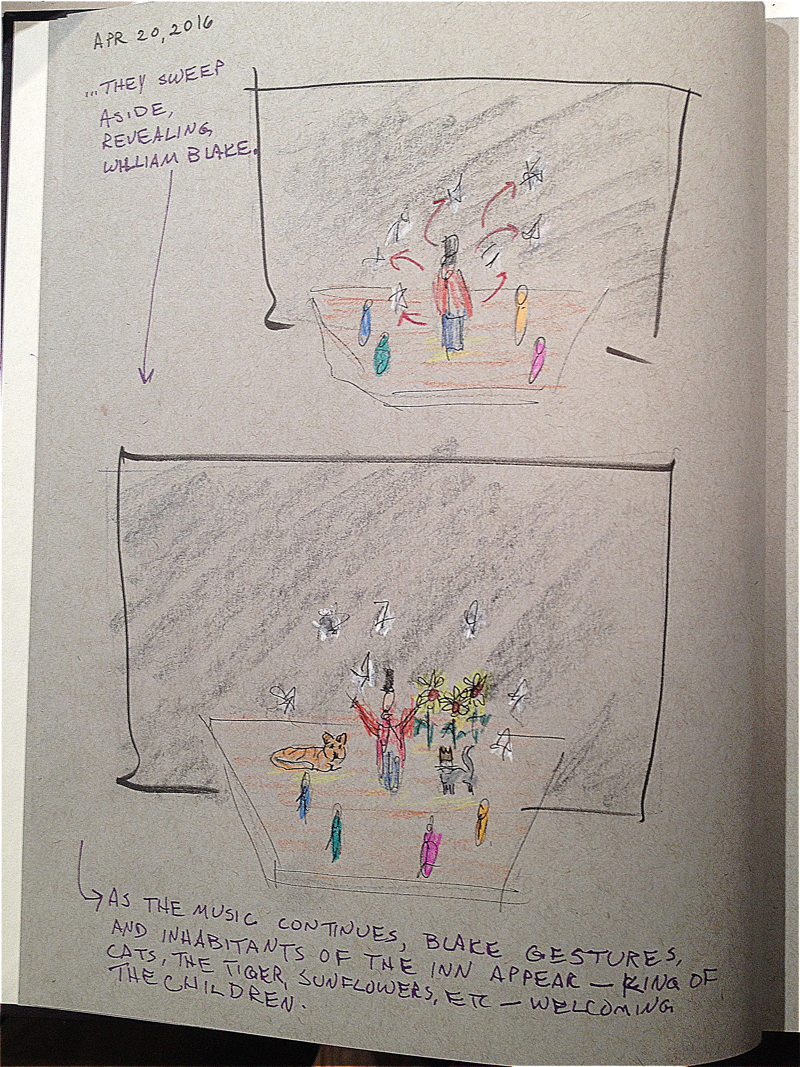 I’m thinking that at their first appearance, the Tiger and the King of Cats should probably be in their puppet avatar.  The denizens of the Inn would move forward, perhaps; at any rate, they would “come to life.”

My ongoing visualization of my William Blake’s Inn: 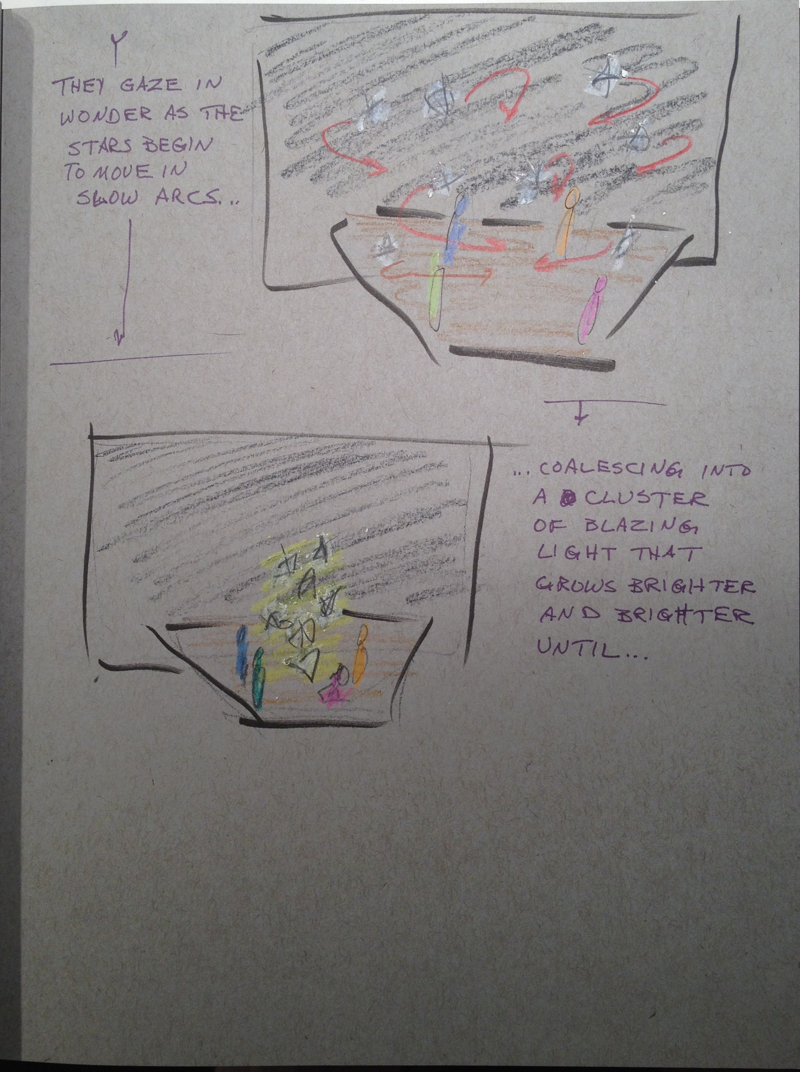 So, yes, the stars are puppets, in the sense that they are held aloft by performers.  There are probably stationary stars in the backdrop, but these are mobile.  You’ll see why tomorrow.

So yesterday, in my ongoing efforts to do absolutely no work on Lichtenbergianism: procrastination as a creative strategy or any of my three musical compositions, I started a new project, an ABORTIVE ATTEMPTS notebook attempting to visualize what a staged production of William Blake’s Inn might look like.[1]

Using the ungodly amount of art supplies I have on hand, I just began with the Prelude, and before I knew it I had the first whole five seconds sketched.  That means I now have o.2% of the entire work visualized. UNSTOPPABLE, that’s what I am.

Anyway, here it is:

Where it says “appear,” imagine “twinkle on.”

And here’s the music: mp3  Remember, it’s just the first five seconds—only 37 and a half minutes to go!

[1] And remember, if you are looking for a charming, expensive piece to do for a world premiere, I am contactable.