Our last full day in Athens, we decided to divide it between the National Archaeological Museum and the National Gallery of Contemporary Art. Gird your loins: there are a lot of photos today. 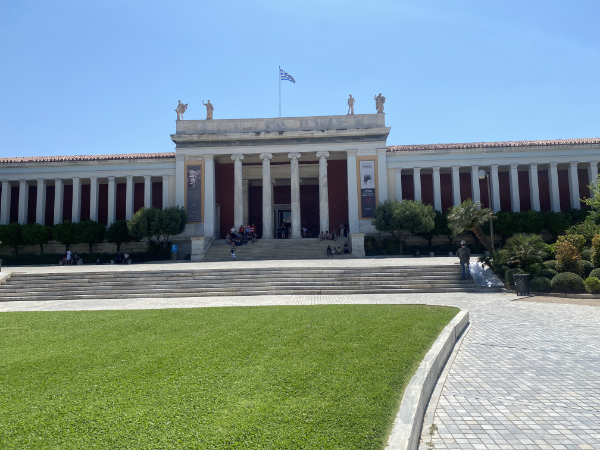 The Archaeological Museum is as big as it looks. Here are just some of the things I found interesting. 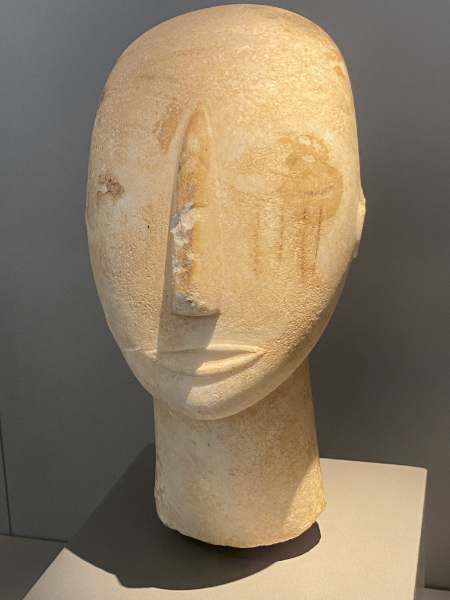 The earliest sculptures from the Cycladic period are beyond modern in their sparse detailing. This very 20th-c.–looking piece was originally painted; you can still see traces of paint on its left eye. 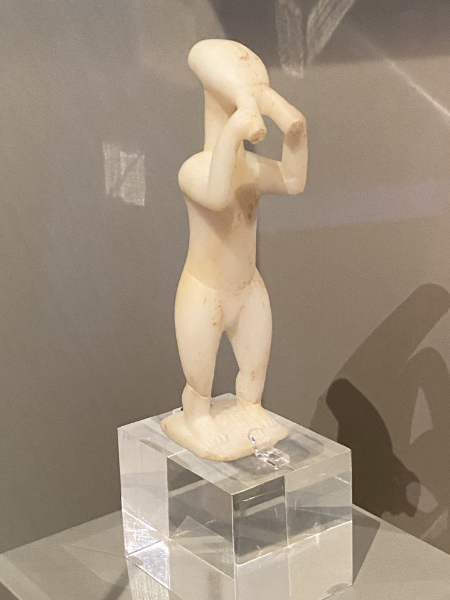 This jaunty musician playing an aulos was, like most pieces from this period, a votive offering. 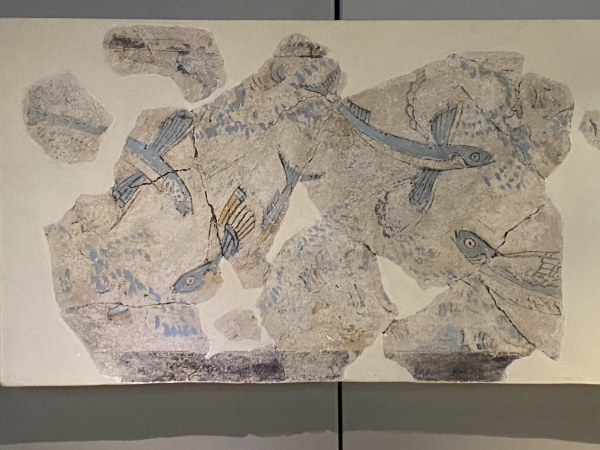 This is a fragment of a Minoan mural, a wall decorated with flying fish, like wallpaper. If I ever get around to writing my book Lessons from the Folk, this could be an illustration of the concept that, left to their own devices, humans will prefer the ornate to the simple.

During the Geometric period, the pottery decorations were just that: circles, spirals, squares, and the meander. 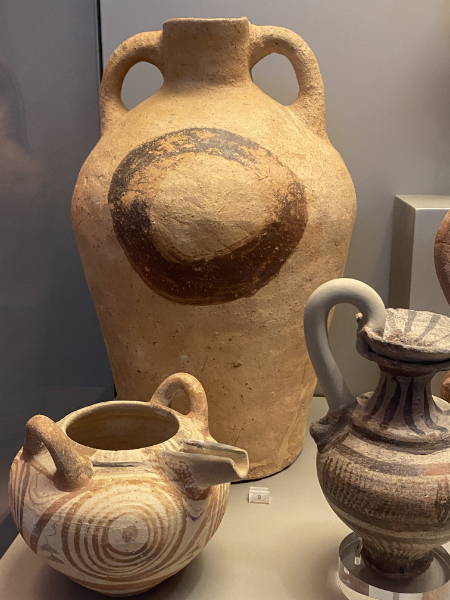 The tall one astonished me with its simplicity, especially compared to all the masterworks around it. 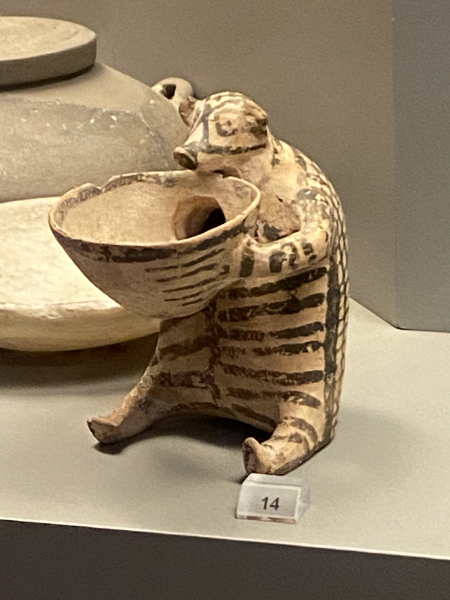 Is he not adorable? He’s a little bowl in the form of a hedgehog. I am not sure why the museum shop did not have replicas of him, because he’d be sitting on my desk right this very moment. (In general the museum shop has completely missed the boat on marketable items.) 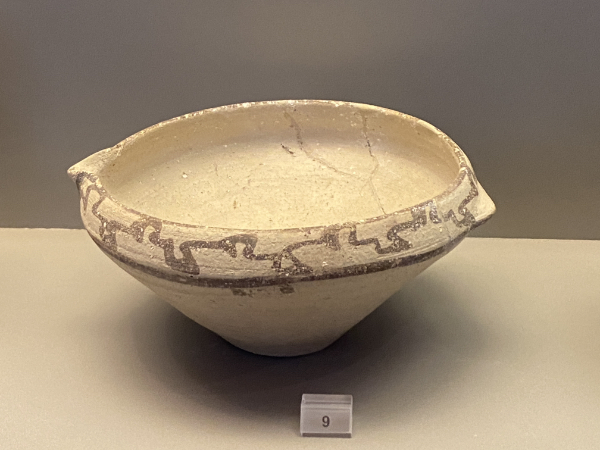 I loved this little bowl, because the meander decoration around its rim is so clumsy. Either the potter was a beginner, or they were “trying something new.” 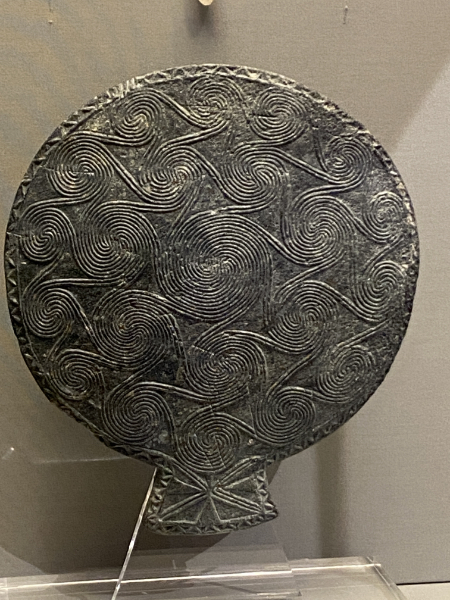 Because look at this piece, a “frying pan,” and apparently that’s exactly what these are. Look at the decoration on that thing, the intricate and meticulous design, the precise construction. Whoever did the clumsy bowl above was not representative of what that culture could do. 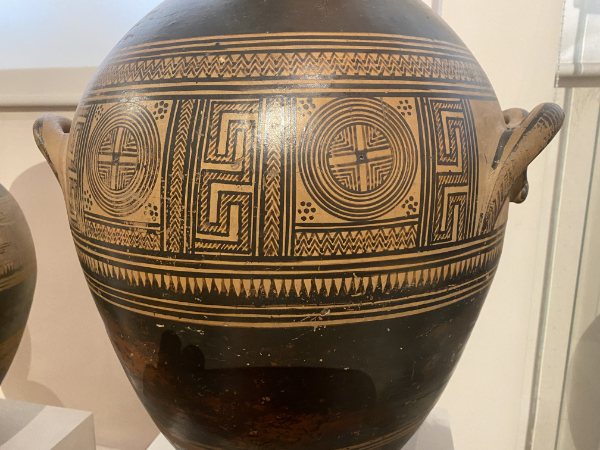 Or this piece, with its extravagant geometrics. Notice the little meander in the vertical rectangles. 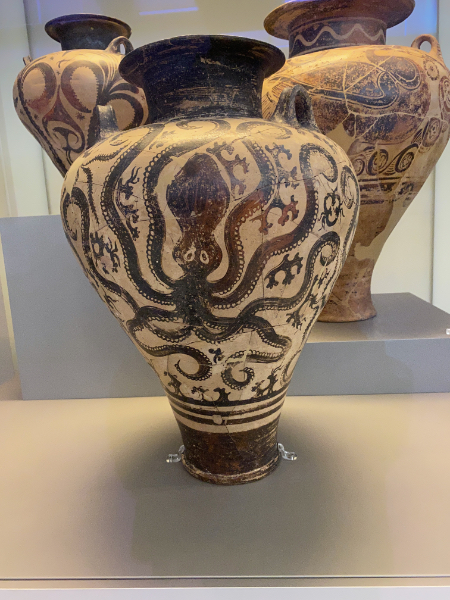 Or this one, with its over-the-top octopus (a major motif in this period). These nicer vases were made for export, both alone and filled with olive oil. 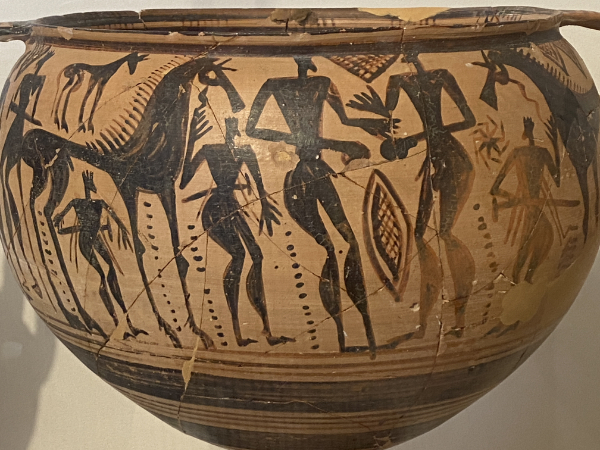 Or even this one, from an earlier period. Its decoration is not as sophisticated as the two pots above, but the artist clearly has a sure hand. 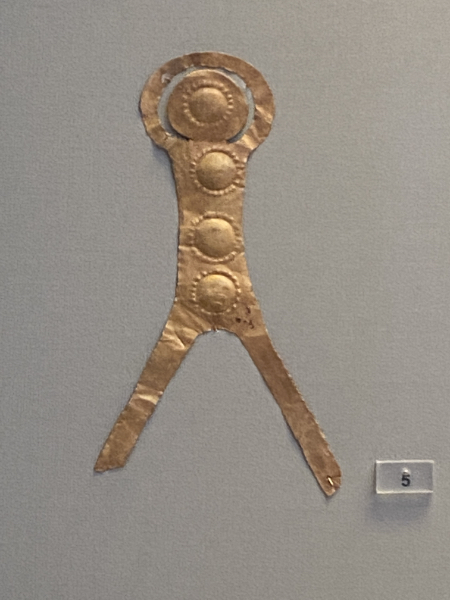 I thought this was a little man, but it’s a Mycenæan shin guard. Made of gold, as one does.

Then we move into the sculptures. 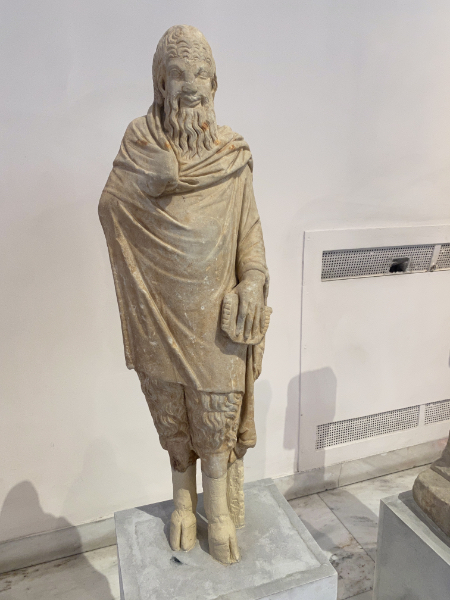 A satyr from the Archaic period; his little quokka smile is typical of the style. I had never seen a sculpture of a satyr from this period, and I don’t remember ever seeing a clothed one from any period. 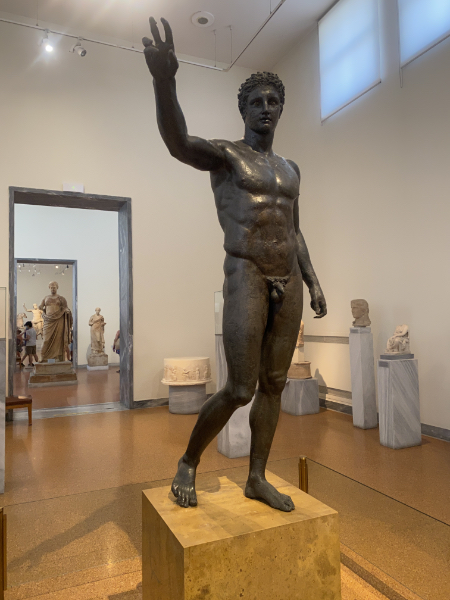 Of course the place is littered with Hellenistic sculptures of impossibly beautiful bodies. This is — they think — Paris; he would have been holding the golden apple in his right hand. 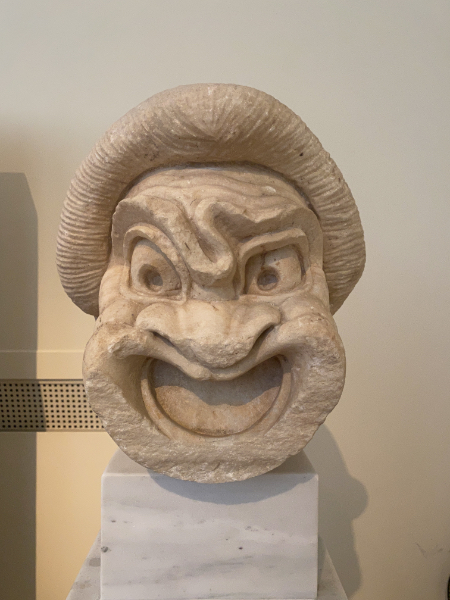 A decoration for a theatre, a comic mask from the New Comedy period. (That’s when comedy stopped being political satires [Aristophanes] and started being slapstick romcoms [Menander, Plautus].) 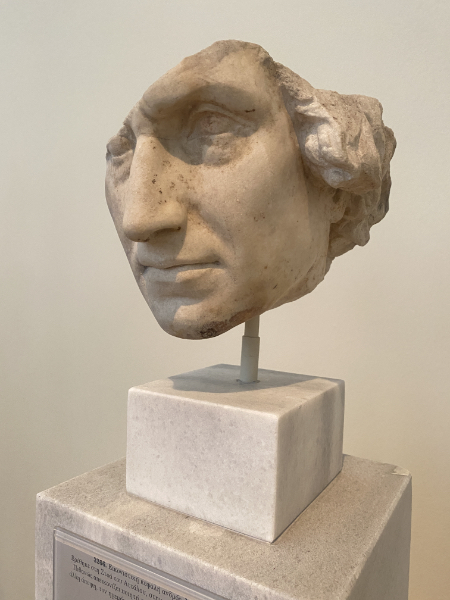 This fragment interested me because it looked like an actual portrait, a real human being and not some idealized god or emperor. I had to double-check the dates on the plaque, it looked so much like a 19th-c. piece. 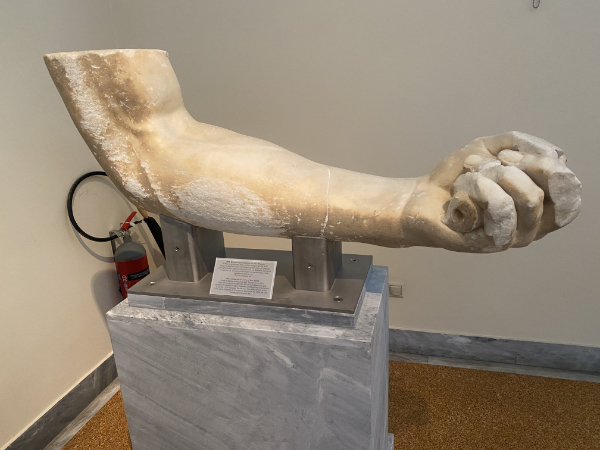 Check out the fire extinguisher in the background for scale. This would have come from an enormous statue of Zeus from a temple. 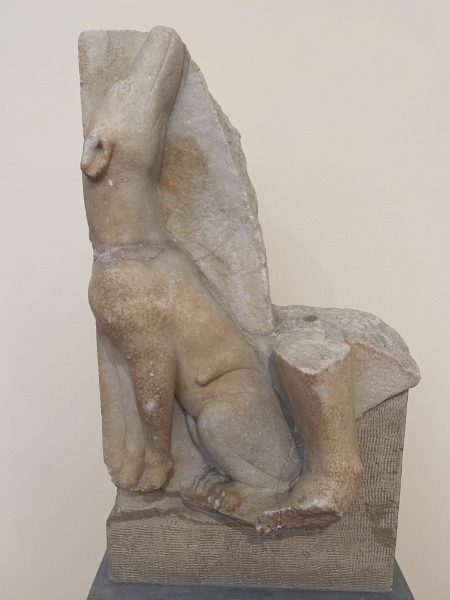 From a funerary sculpture. Look how sweetly the doggo is looking back up at his beloved owner. 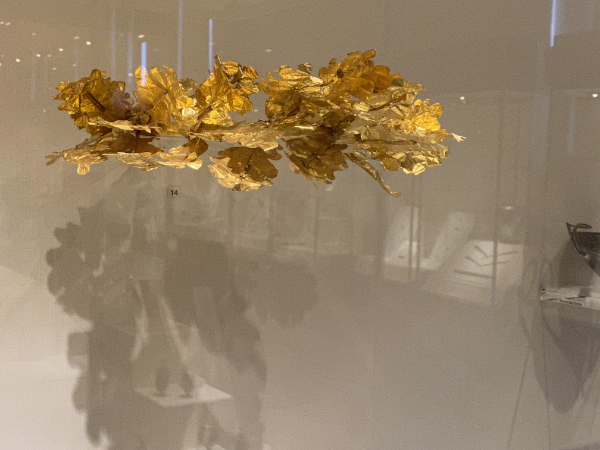 Then there was the jewelry. This is a golden wreath of oak leaves. I’d wear it. 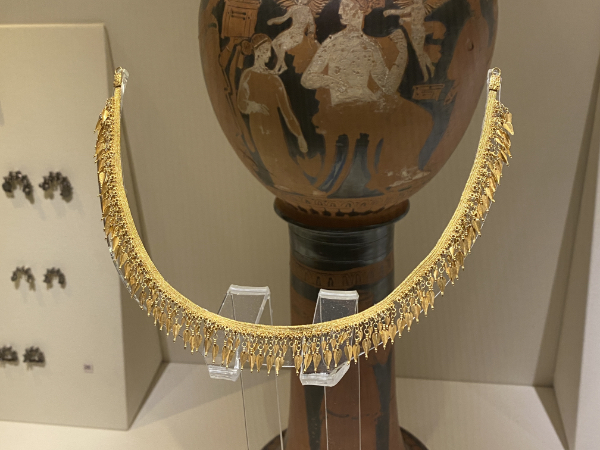 What a necklace! Have a closeup: 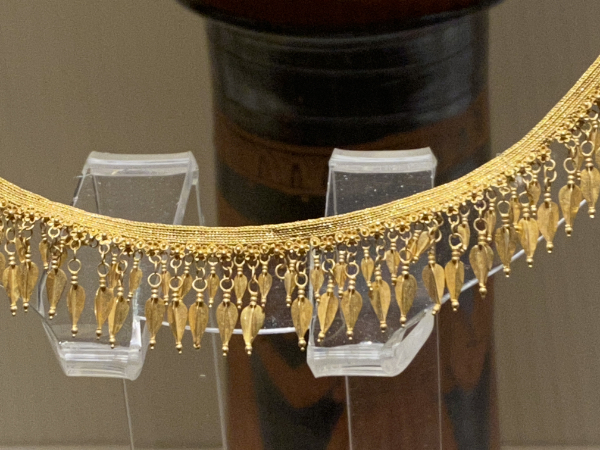 The band is woven, and the little leaves are individually and precisely made. Those dark spots on the leaves are garnets. 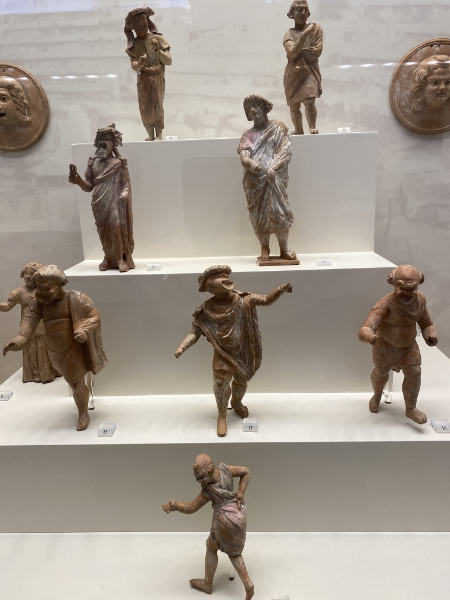 There was so much more. My brain began to dissociate from all the craftmanship it was seeing, so many objects of beauty from so long ago, rescued somehow from the great drain of Time and preserved here. Believe me, I have more photos than I have shown here.