Yesterday this person was in line in front of me at the Kroger: 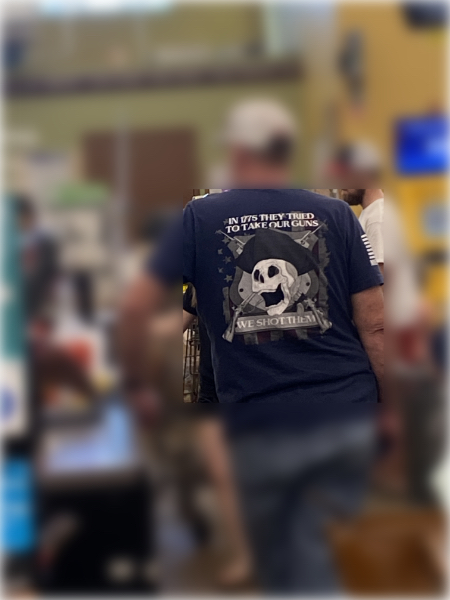 Yes, you can buy these shirts, although there seems to be some confusion amongst the rabble about their exact precedents.

The American Revolution is not my time period, so I could be out of the loop on the latest historicity on the founding of our nation, but I do not remember the confiscation of weapons as being any part of the effort to break free of England. It was pretty much all about the self-governance thing, No Taxation Without Representation, et al.

If you needed an object lesson in how divorced from reality the right-wing nutjobs are today, here it is. They have concocted a fake national memory and are wearing t-shirts to advertise their deeply held religious beliefs in this fake memory. If I had asked this person to explain how and when “they” tried to “take our guns,” they would have blathered about the Second Amendment but they would not have answered the question. They would not have been able to answer the question.

More than that, they would not have known that they didn’t and couldn’t answer the question.

I, on the other hand, would have told him that perhaps he and his ilk were thinking of Shay’s Rebellion in 1786–7, when lots o’ muskets were confiscated after a group of disgruntled farmers and vets took up arms against the government of Massachusetts. It led semi-directly to the Constitutional Convention of 1787, which led to the Bill of Rights, hence and ergo the SECOND AMENDMENT (MAY THE LORD JUST BLESS ITS HOLY NAME AMEN) KENNETH. (To be fair, I think those rebels had some cromulent complaints, unlike our current crop.)