Last week, our good friends Marc and Mary Frances became grandparents with the birth of Vivian. Marc promptly asked me to come up with a cocktail to commemorate the event, something honoring both the South and Korea (her mother is of Asian descent). I replied, “So bourbon and kimchi?,” which I thought was rather witty, but that idea went nowhere.

One problem was that although there are multiple Korean alcohols to try, none are readily available in these parts other than soju (which we were aware of after watching Mystic Pop-Up Bar). Another problem was that I had no idea what soju tasted like.

You may imagine my surprise when I found that soju is flavorless. Rather, it tastes like water, unlike vodka, the ABV[1] of which produces a burn that has to count for flavor. (Soju’s ABV is only 25%, stronger than wine but nowhere near the 40% of Smirnoff No. 21, for example.)

Therefore the cocktail I had imagined of soju and bourbon would have been pointless.

It took me three or four tries, but finally I achieved a drink that is sweet, but not overly, with layers that are detectable. May I present 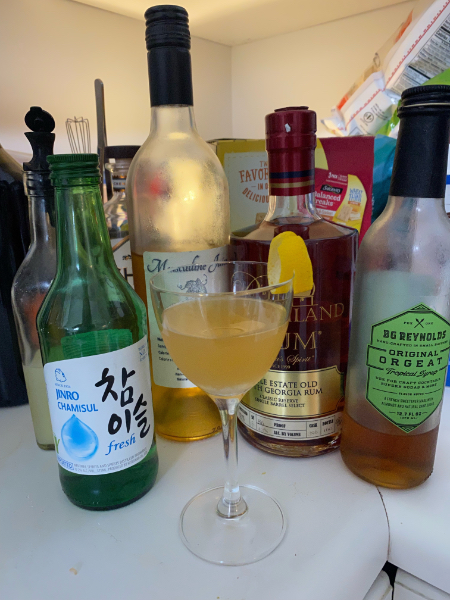 The rum and orgeat tilt the drink towards tiki, but not overly so. If you don’t have muscadine juice — and really, why would you? — try white grape juice. For Richland Rum, any aged rum should do.

And here’s to Vivian!