I’d like to name this one Upside-Down New York Sour, because that’s what it is, but that’s just unwieldy.

A New York Sour is as follows:

Combine the first three ingredients in a shaker with ice. Shake and strain into a highball glass. Float the red wine on top.

It’s a tasty, elegant cocktail; it served as the inspiration for my Rose-Colored G.

Now it has inspired this: 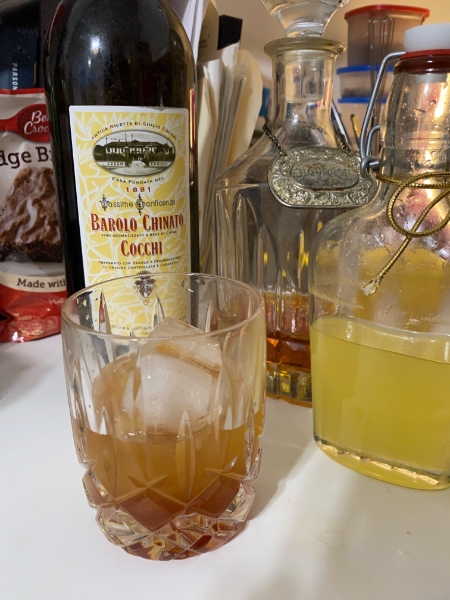 One is supposed to shake any admixture containing citrus juices, but I must admit I just poured the bourbon and oleo saccharum straight into the glass. More work is required. It probably could benefit from a lemon peel garnish as well.

So mix the first two ingredients, and then add the Barolo Chinato Cocchi. I had not considered that this fortified wine might have a different specific gravity than regular red wine, so I was a little disappointed when it didn’t float but rather sank to the bottom. (It occurs to me that this is more like a Tequila Sunrise in looks…)

No matter: It is a very tasty, sophisticated drink.

Note: It is also a fairly expensive drink, given the cost of the Barolo. But if you can swing it, it’s worth it.

There are multiple versions of this recipe online. This is the one I’ve settled on, but you can do all lemons, or any variety of orange instead of grapefruit.

Peel the grapefruit and the lemon. Place the peels in a medium bowl; add the sugar.  Muddle the peels with the sugar about a minute.

Leave for 4–6 hours.  The oils from the peels will puddle at the bottom of the bowl.

Add the lemon juice and stir to dissolve all the sugar.

Strain into a container. Refrigerate and enjoy!

UPDATE: Alan Brown on Facebook has suggested New York Sunset, which I think is perfectly cromulent. I’ll see if it sticks.

UPDATE 2: Having checked to see if such a cocktail with that name already existed — it does not — I am claiming the name for this drink.

One thought on “New (unnamed) cocktail (but now named)”