No, I still have not gotten a haircut. 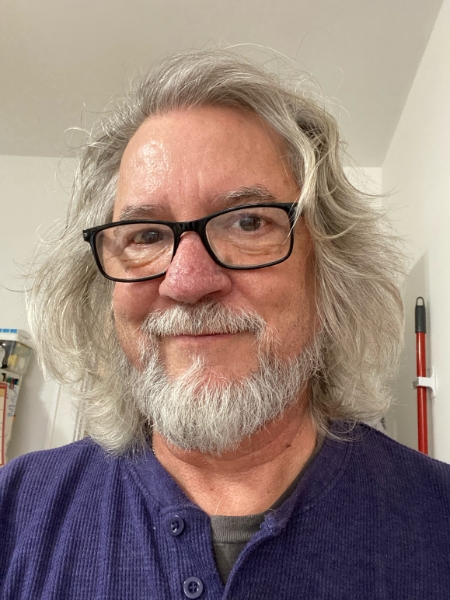 It’s been a full year, and I’m rather enjoying my long, luscious locks, actually. They’re long enough to hit my shoulders now; when I pull it back with my Longhair Guys‘ hair ties, it now forms a man-bun rather than a stumpy little ponytail.

Yeah, I’m cool. Especially now that I have cut off the weird strands at my temples that looked more like a Seuss character’s sideburns than not. (Sorry, no photo of that phenomenon.)

Now I’m in the phase of figuring out what most women and dedicated longhair guys already know: how to maintain it so that it doesn’t always look like the mugshot of someone who believes Trump won the election.

The problem is that my hair has always been superfine, and it’s only since I’ve gone gray that it has had any body at all. If I had done this when I was younger, I’d be on my way to pulling off Jared Leto or Elrond at this point. But as you can see, it tends to wave, so I’m having to explore that delicate balance between the RIGHT SHAMPOO, KENNETH, conditioner, and frequency. NOT TO MENTION PRODUCT, KENNETH. Ugh. Too much work.

With vaccines here — I’ve had my first dose — it will eventually be safe enough to get a haircut, and then I will have to face the question: do I want to keep the long hair?

I don’t know. Probably not. It’s a lot to deal with, and I’m really over having to keep it out of my eyes. But I have enjoyed it; it’s been a great way to recognize the disruptive nature of the pandemic. If you can’t break down societal expectations during the plague, when can you?