This image popped up this morning in Cory Doctorow’s Twitter feed: 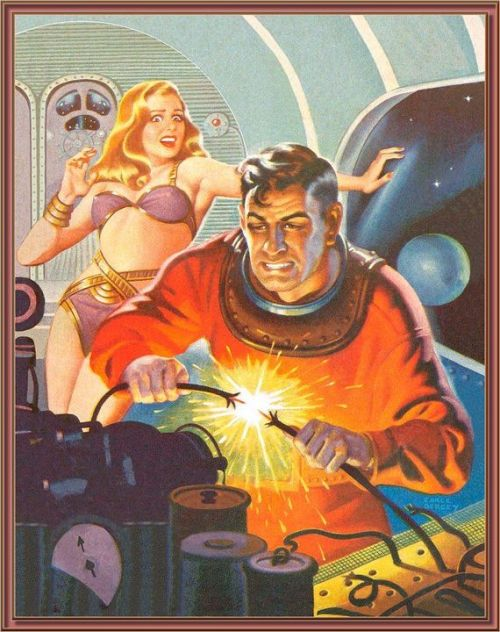 It’s a cover illustration by one Earle Bergey from back in the Good Old Days, when Men had forelocks and Women were all Princess Leia, and it occurred to me that it represents almost completely the mindset of the Trump voter.

Wait, where are you going? I can explain.

First, it’s clearly an illustration for some rip-roaring yarn of SPACE ADVENTURE, KENNETH, in which the writer just made up stuff without any regard to science or how space travel might actually work. (Notice how the babe is leaning against the window in terror (as one does); she is clearly not dealing with weightlessness.) It stars the Heroic Manly Man who has to save the Rita Hayworth clone BARE-HANDEDLY, KENNETH, not to mention all by himself. I have no way of knowing how they found themselves in this predicament, but it probably involved sabotage by nefarious foreigners/aliens.

The writer might have been some well-known author — many did write for the pulps — but probably not. Even if they were a respected writer elsewhere, they just cranked out these stories for the pulps every week, getting paid by the word. Imagine the scriptwriters for Hallmark holiday movies, only IN SPACE. Neither reality nor plausibility has anything to do with it.

Now create in your mind the reader of this stuff. It would be someone who was not only ignorant of physics and human nature but also willing to accept the unreality of the tale as perfectly cromulent. He sees himself (let’s face it, it’s a guy) in the Heroic Manly Man, whose world makes perfect sense to him. 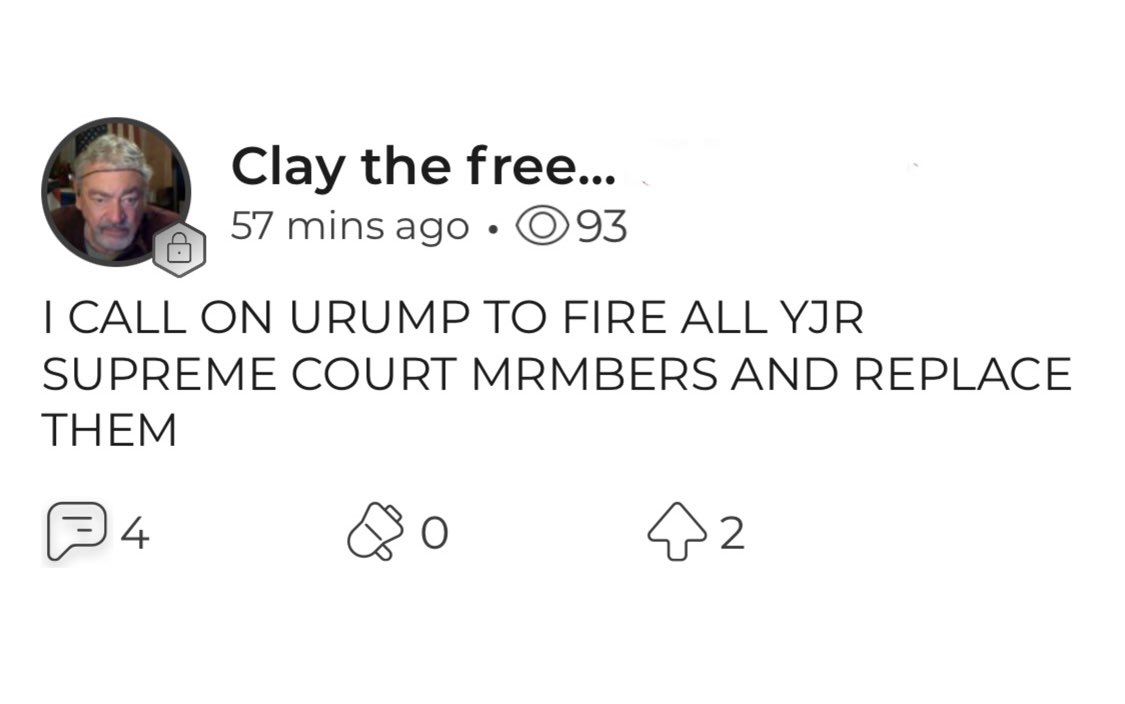 To Clay the free…, it’s simple: all Trump has to do is put on his Heroic Manly Man suit and… fire the Supreme Court. To Clay, this is perfectly cromulent. It’s what he would do in the same situation, and it’s obvious that this is the solution to the problem. You just “destroy” the enemy. Pew-pew-pew!

Of course, Clay’s vision of how the world works is wrong. It is no more realistic or plausible than 1940s science fiction. But Clay has no other way of looking at the world and — this is critical — he is not interested in any other way of looking at the world. The facts of space travel/constitutional government are completely irrelevant to his worldview, and that’s the way he likes it. For the last couple of months — and especially since the election — I have been reminded of a sci-fi short story I read in my youth. Thanks to my friends on Facebook: my bare recollection of the plot was enough for them to find the story for me: “The Men Return,” by Jack Vance.

In this story, Earth has entered a “pocket of non-causality,” and cause-and-effect no longer exist:

Far away rose low hills, blurring into the sky, which was mottled and sallow like poor milk-glass. The intervening plain spread like rotten velvet, black-green and wrinkled, streaked with ocher and rust. A fountain of liquid rock jetted high in the air, branched out into black coral. In the middle distance a family of gray objects evolved with a sense of purposeful destiny: spheres melted into pyramids, became domes, tufts of white spires, sky-piercing poles; then, as a final tour de force, tesseracts.

Needless to say, the Relicts, the survivors of humanity, are on their last legs. The Organisms, on the other hand, have adapted quite well:

Out on the plain one of the Organisms, Alpha, sat down, caught a handful of air, a globe of blue liquid, a rock, kneaded them together, pulled the mixture like taffy, gave it a great heave. It uncoiled from this hand like rope.

When you can manipulate matter, feeding yourself is not an issue, I suppose. It’s kind of like being rich.

Anyway, Finn is our hero Relict, and the action of the story involves him trying to find enough food to stay alive. I’ll spare you the details.

The reason this story popped up in my mind is how it ends: the Earth emerges from the pocket of non-causality, and the Organisms, who have spent the entire story as satisfied inhabitants of a Dali painting, are suddenly bollixed:

Alpha [who has had a vision of the future] cried, “Here is my intuition! It is exactly as I knew. The freedom is gone; the tightness, the constriction are back!”

“How will we defeat it?” asked another Organism.

“Easily,” said a third. “Each must fight a part of the battle. I  plant to hurl myself at the sun, and blot it from existence.” And he crouched, threw himself into the air. He fell on his back and broke his neck.

One of the other Organisms attempted to step across as crevasse twenty feet wide and disappeared into it; the other sat down, swallowed rocks to assuage his hunger, and presently went into convulsions.

The story is a lot clunkier than I remember it, and there’s a bit of Heroic Manly Manliness from Finn that is laughable now, but watching Trump voters these days reminds me of the Organisms and their plight: once cause and effect return, once verifiable and reliable reality rule the day, they cannot cope. They flee into QAnon, or the legal boondoggles of Lin Wood/Sidney Powell/Rudy Giuliani, or Parler, and they burrow into ever-narrowing concentric circles, ever-crazier theories about how they’re winning, going to win, eventually will win — and then we’ll all be sorry, KENNETH.