Meet Ed McGinty. He is a 71-year-old resident of The Villages, Florida’s most notorious retirement community. It is filled with Trumpsters and Magats, but Ed is not one of them. Go read real quick about Ed.

Recently Ed was physically attacked by a Magat. He is undeterred.

Here is a letter he received after that attack: 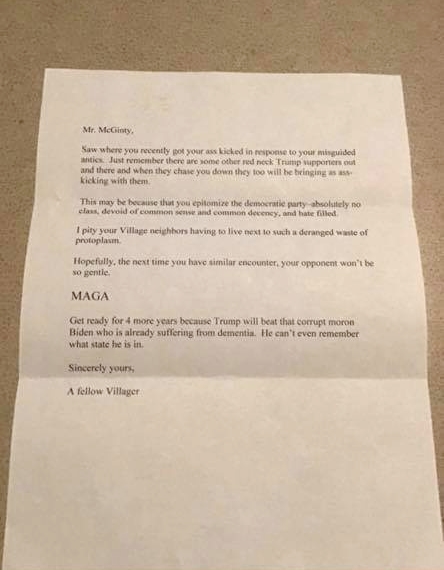 Here are the first two paragraphs:

Saw where you recently got your ass kicked in response to your misguided antics. Just remember there are some other red neck Trump supporters out and there and when they chase you down they too will be bringing an ass-kicking with them.

This may be because that you epitomize the democratic party—absolutely no class, devoid of common sense and common decency, and hate filled.

First of all, I’m not surprised by the garbled syntax. That just goes hand in hand with the Trumpster thought processes. I am surprised that this particular Magat failed to use the approved “Democrat party” shibboleth rather than the party’s official name.

And then there’s the problem of how a human brain can write that second paragraph after having written the first. I’m finding it hard to imagine how “absolutely no class, devoid of common sense and common decency, and hate filled” dovetails with “ass kicked,” “misguided antics,” and the threat of violence. And there’s that fourth paragraph, “Hopefully, the next time you have similar encounter, your opponent won’t be so gentle.” In what universe is that not “devoid of common decency” or “hate filled”?