I don’t know if you’ve ever been on the internet, but if you have and you follow politics at all, then you have probably run into the bad faith argument which argues that nuh-uh Democrats are the real racists because Lincoln freed the slaves and the Democrats founded the KKK so there. I have blogged about it here. 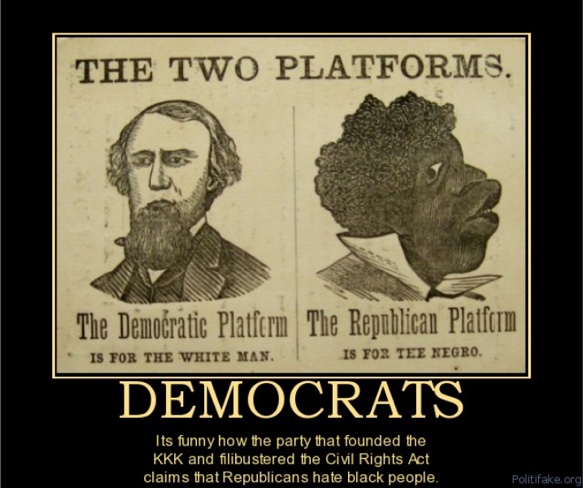 One evening recently, having driven home around I-285, I found myself wondering exactly why we have a road in Atlanta and a county down south named “Ben Hill.”  Why the two names? For a millisecond I thought it was some weird fluke in history that we were honoring a Jewish or Arabic Georgian, but that thought dissolved immediately in derision. I was back to wondering who “Ben Hill” was.

Short answer: U.S. and C.S.A. senator, Benjamin Harvey Hill. Complicated fellow, but apparently well respected enough to have a county named after him 25 years after he died. (Still no answer as to why we use his whole name.  What’s wrong with plain old Hill County?  But I digress.)

Here’s the eye-opener, though: in the Wikipedia article on the county itself, there’s a chart of presidential elections and how the county voted.  Go have a look.

From 1912–1960, solid Democrat. Then, suddenly, in 1964, Republican. And in 1968, Independent — and except for a couple of aberrations for Southern candidates, it’s been solid red ever since.

Is there any doubt about what happened? You might think that suddenly the population of Ben Hill County became concerned about their stock market investments and other typical Republican issues, but you might be A Idiot. (Have you ever been to Fitzgerald? I have; my mother was born there.) You could try to resist linking the passage of the Civil Rights Act in 1964 to the switch, but 1968 gives it away: they voted for George Wallace, people.  Hmm.

So yes, once again, the Democratic Party was formerly the party of racist voters. A century ago. But Ben Hill County puts it right out there: those voters have switched their party allegiance, and it ain’t because they’re concerned about their stock portfolios.