Note: this is being written after our return.  Somehow there’s not an hour available for blogging when one is enjoying NYC.

I charted our course for the Tenement Museum on the Lower East Side, and the easiest course was to walk over to 6th Avenue and hop on — you guessed it — the F train and head south.

As we strolled past Times Square, there was a cathedral on the sidewalk, you guys! 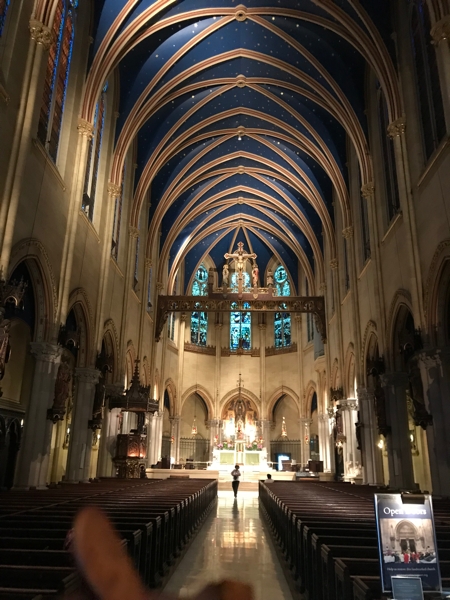 This is the Church of St. Mary the Virgin, and it’s a perfectly cromulent Catholic church, except it’s Episcopalian.  High Episcopalian.  Like stratospheric Episcopalian: the church’s nickname is Smoky Mary’s because of the use of incense in services.  Plus a confessional and chapels and iconography and it looks like a Catholic church.

We were greeted warmly by a lovely lady who was either Scot or Welsh — I really couldn’t tell — who encouraged us to keep touring even though a “read” service was about to start, and when we demurred, took us into the parish hall to show us a couple of historic photographs of the place.

It was the first cathedral to be built using skyscraper techniques, i.e., steel girder scaffolding, etc. 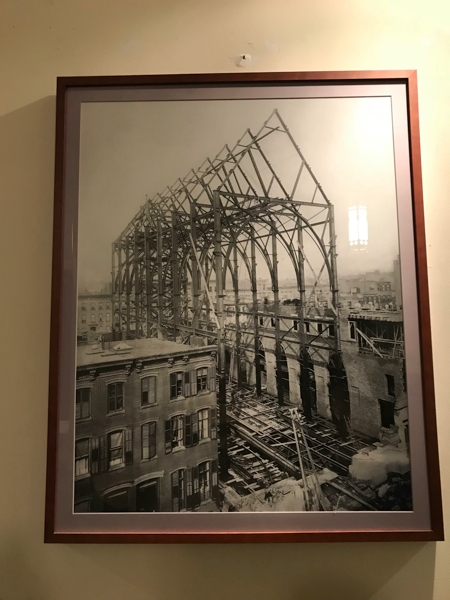 We thanked her profusely and moved on. When we got to 6th Ave, aka Avenue of the Americas, we were delighted to see a street fair.  (I don’t know that traffic was delighted, but hey, the streets were open, just not this one avenue.) 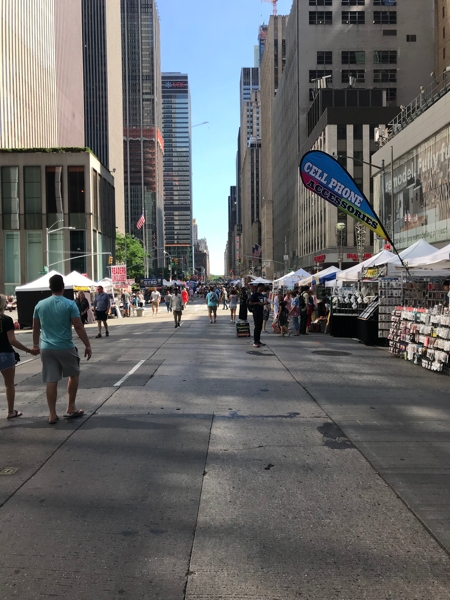 We browsed a bit and decided to head on down to the Tenement Museum as planned, then stop and shop on our return.

We’d been to the Tenement Museum the last time we were in NYC, and we said then we would return.  The museum has taken a tenement building built in 1863 and restored parts of each of the six floors to tell the story of an immigrant family who lived there at some point. Each floor is a separate guided tour, plus there’s a neighborhood tour. The focus of it all is immigration and the immigrant experience.

Last time we did the ground floor tour, a German lager saloon, with a middle-class German-American family.  The Lower East Side in the 1860s was the third-largest German-speaking city in the world at the time, behind Berlin and Vienna. Because of that wave of immigrants, we drink cold lager beer, not lukewarm ale.

This visit, we did the fourth floor Irish family, the Moores, who moved there from the infamous Five Points area (Gangs of New York territory) and found themselves the only English-speakers in the building. Although the privies in the back courtyard were connected to the sewer system, the building did not have running water or gas lighting in 1869.  Bridget had to walk down the stairs to fill her bucket with water multiple times a day; we were handed a bucket with gravel in it to demonstrate the weight she would have had to deal with along with her baby and maybe a toddler or two.

The Moores only lived there for a year before moving closer to the old St. Patrick’s, a more Irish-Catholic neighborhood. We were shown the virulent anti-Irish sentiment of the time — they were vicious savages, not really human.  Every image showed them as ape-like, primitive.  Here’s a cartoon by Thomas Nast, published in Harper’s after an incident at the 1867 St. Patrick’s Day Parade: 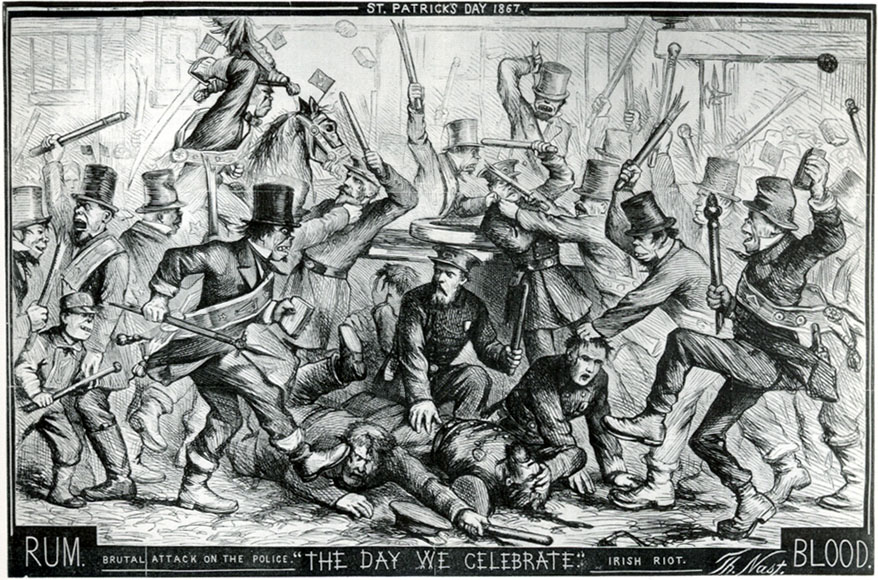 You’d never know that there were only a total of 7-10 people involved in the actual incident.

So: immigrants from an alien (read: “Roman Catholic”) culture are depicted as violent, subhuman criminals.  Thank goodness we don’t do that any more oh wait

Back to the street fair, where we both found things to intrigue us enough to purchase them.  I did not buy another singing bowl, however.

Heading back across Times Square, the heat was oppressive, and suddenly the place looked a lot like New York: 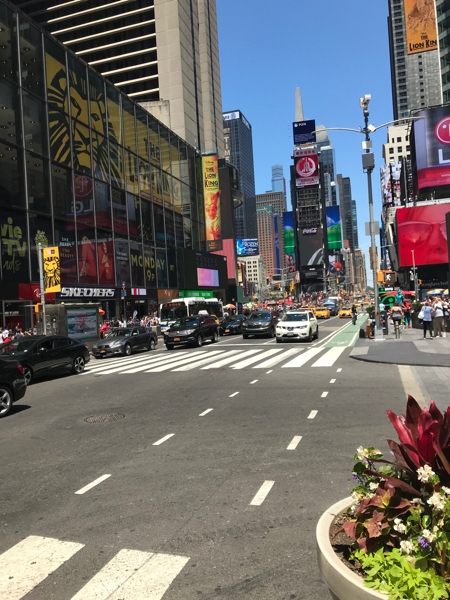 We lunched at Sardi’s — yes, Sardi’s — and it was amazingly civilized.  Quiet, calm, the waiter practically whispered.  We ate with Mike Funt’s buddy Dick van Dyke: 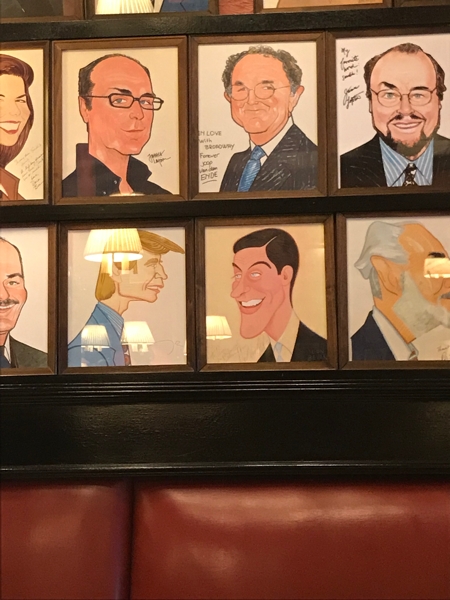 I texted him the photo and he asked if that were Trump next to Dick, but it’s Michael York thank god.

Our matinee was The Band’s Visit, this year’s Tony Award winner for Best Musical. What a gorgeous show — low-key, sweet, heartfelt, human. I have a low tolerance for Bway pizazz, and this show was blessedly free of all of that. There was only one “big” number, and it flowed naturally out of a sweet love ballad from a lonely boy. Suddenly all the characters we’d met during the course of events were there, and we had a gorgeous choral swell… and that was it.  No sequins, no glitz, no big orchestral crashing about, just the Alexandria Policeman’s Ceremonial Orchestra and the very human voices.

I highly recommend this show.  It’s based on the movie of the same name, and the plot is deceptively simple: an Egyptian police band has been invited to Israel to play for the opening of a new Arab cultural center in Petah Tikvah, but due to the bus ticket agent’s Hebrew accent and the band member’s Egyptian accent, they are given tickets to Bet Hatikva — a nowhere place in the Negev Desert. The local cafe owner Dina takes pity on them and lets them stay with her and her brothers overnight.  The next twelve hours or so we learn about each of their lives, and spoiler alert! they’re all human beings.

Quick dinner at the Glass House Tavern before heading over to New World Stages for our final show.  We really bonded with our bartender, Valerie, and the young man whose name we never learned.  This is called foreshadowing.

Our last show was Puffs, or Seven Increasingly Eventful Years at a Certain School of Magic and Magic. It was a treat. In it, if you can imagine, three kids at the Magic School meet their first year and go on to suffer the slings and arrows of outrageous fortune caused by one of their classmates and his fight against the dark overlord. We are treated to every detail, every character, every nuance of the Harry Potter books and films from the viewpoint of the hapless Puffs.  It’s adorable.

The parody is terrific, the young actors are skilled and hysterical, and the ending is sadder than you might think. Think of Rosencrantz & Guildenstern Are Dead… at Hogwarts, only with quick changes, and you get the idea. 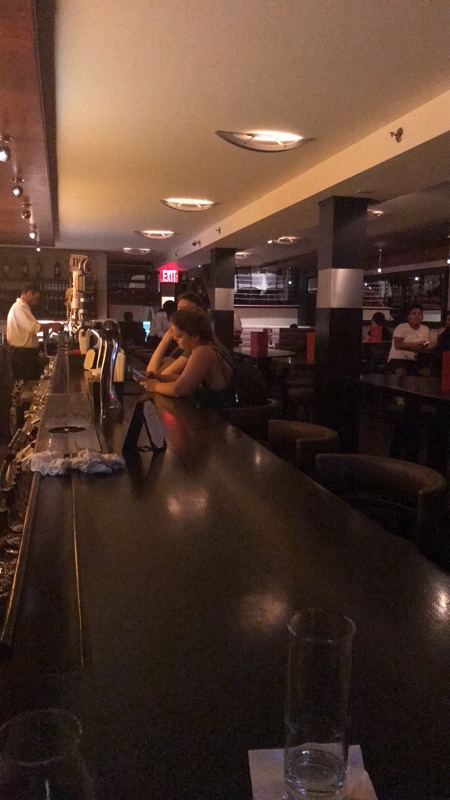 Finally it was time to head back to Glass House Tavern for a final nightcap and a dessert. We chatted more with our handsome young bartender about his hopes and dreams — having grown up in Manhattan, he wants to finish school somewhere else. When it was time to wrap it all up, I decided we should give our Metro cards to our bartenders.  They were seven-day passes and were good for unlimited trips until Wednesday.

That’s when I found out that my back pocket was empty.

We headed back to New World Stages. It was about 10:30, and of course the place was dark.  “Let’s go around and pound on all the doors,” said my Lovely First Wife, but I pooh-poohed the notion.  This was Sunday night; Broadway is dark on Monday.  Everyone would have headed home to begin their days off.

We went back to the room, where I called my credit card people and suspended my cards.  The next morning, we noticed a message.  It was the theatre; they had my things, and we could pick them up at the stage door until 11:30.  The night before.  Ugh. I  hate it when she’s right.  But she was right.

Thank goodness I use my passport to get through airport security, or I would still be in Manhattan.  On the plus side, I would have retrieved my wallet and Waste Book at this point.  I’ve emailed the theatre asking them to use the cash in the wallet to overnight everything back to me and to keep the rest as a donation, but I haven’t heard from them yet.  I’ll keep you posted.

We flew home and arrived safe and sound, albeit without a driver’s license or credit cards.  The end.