For a while now I’ve noticed that the granite circle at the center of the labyrinth was not level and for some reason that bothered me.  I would show you a photo, but for some reason I do not have a good shot of the center.

Here it is ten years ago before I build the bowl for the center: 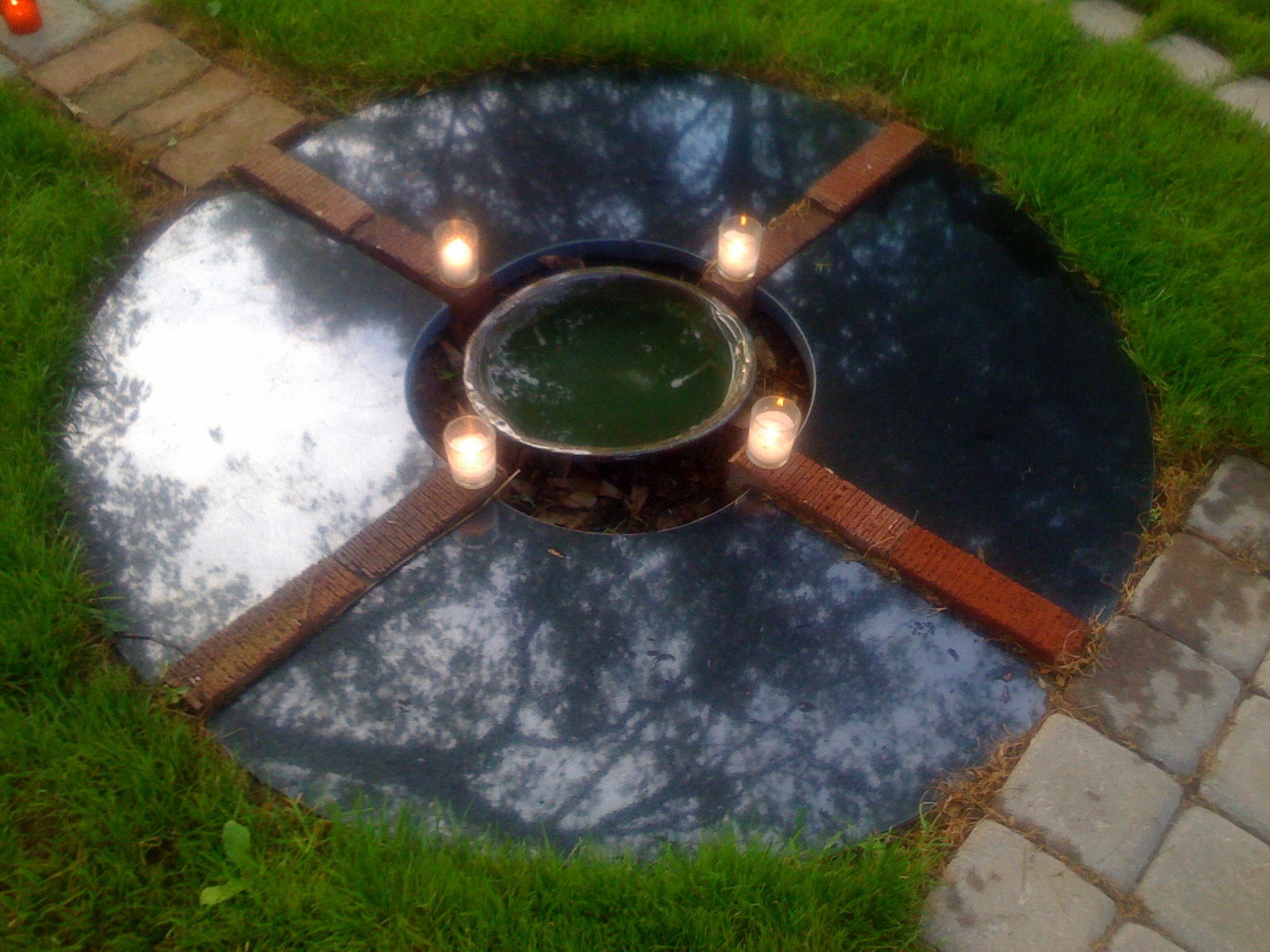 And here it is last fall, all cluttered and dirty: 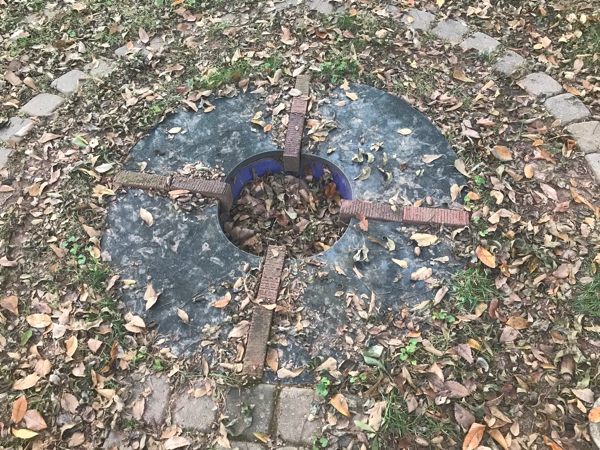 For those of you just joining us, the center is four pieces of black granite with a ceramic bowl set into the ground. The bricks are aligned with the points of the compass.

Anyway, I have a short list of improvement projects that I’ve been waiting on warm weather to do, and on Friday I decided to knuckle down and start with this one.  As we go through the process here you will understand why I was reticent about starting.

First, we remove the granite pieces and give all the ants time to find new homes. 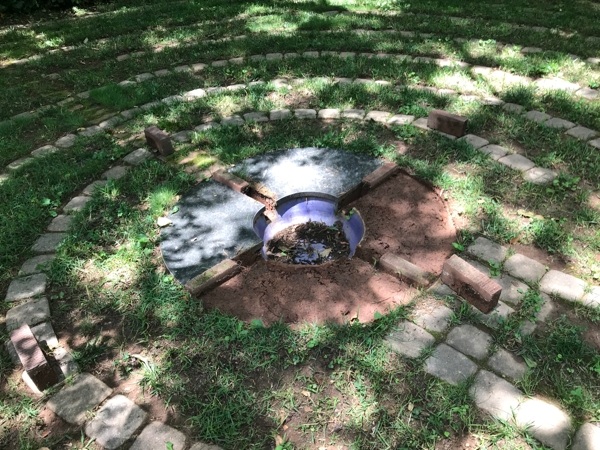 I thought I had marked them on the back as to their location (NE, SW, etc.) but I couldn’t see any such markings.  Perhaps they’ve faded.

I placed them so that I could remember which one went where.  (They are not quite equal.) 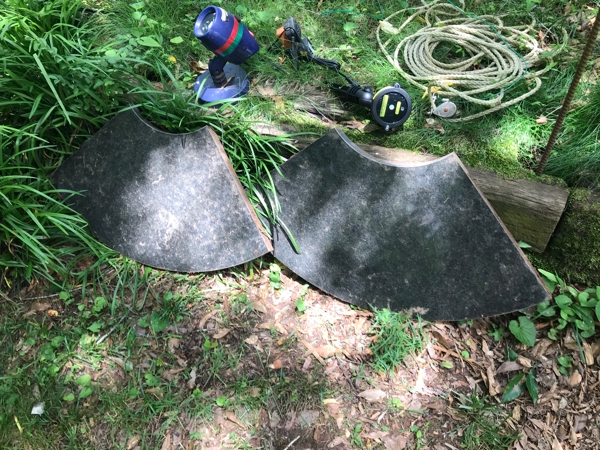 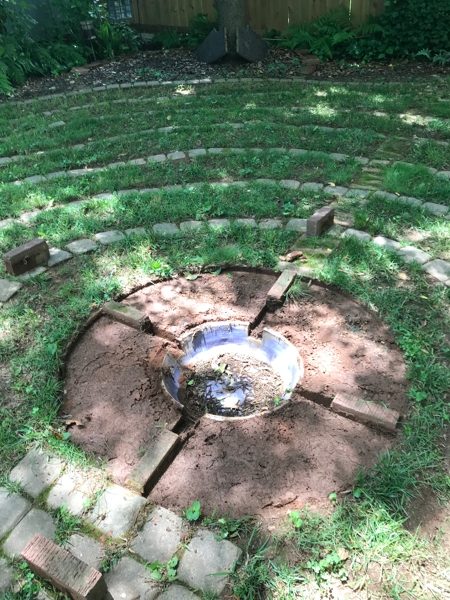 Let’s pause for a second.  The levelness of the center was not the only problem I wanted to solve.  Beneath the bowl was a drainage system: a 6″ PVC pipe extending down three feet, with river rocks both inside it and around it.  After ten years, it had finally filled up, and I was going to have to excavate it.

Also, there was a gap between the bowl and the granite, which allowed dirt to wash into the bowl (and fill up the drainage system).  In fact, the bricks don’t actually rest on the bowl; I used four little scarabs to prop them up. (One disappeared at some point.) 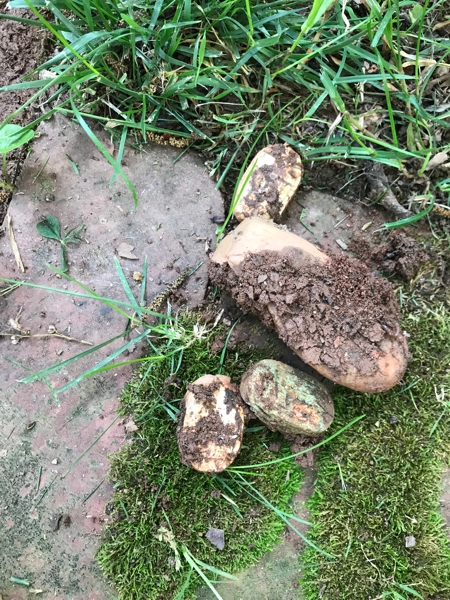 The first problem I faced was getting the bowl out.  I was terrified of breaking it.  I loosened the soil around it with the weeding tool.

Then, using other garden implements, I dug out around the bowl… 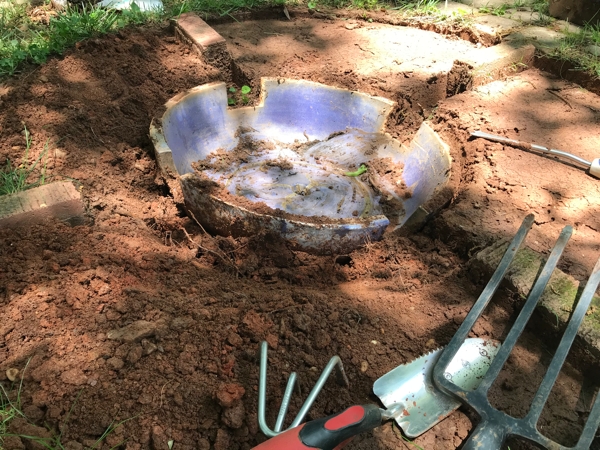 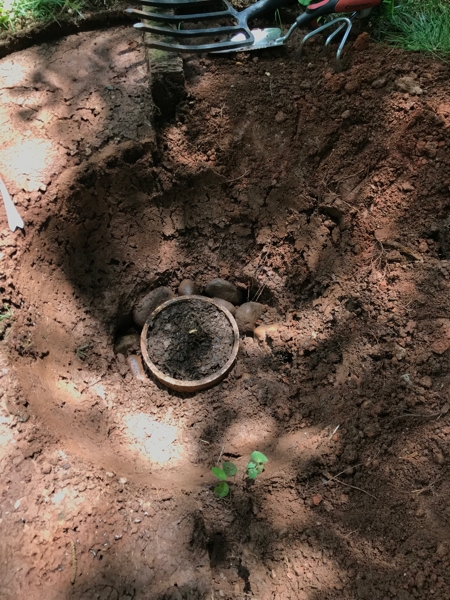 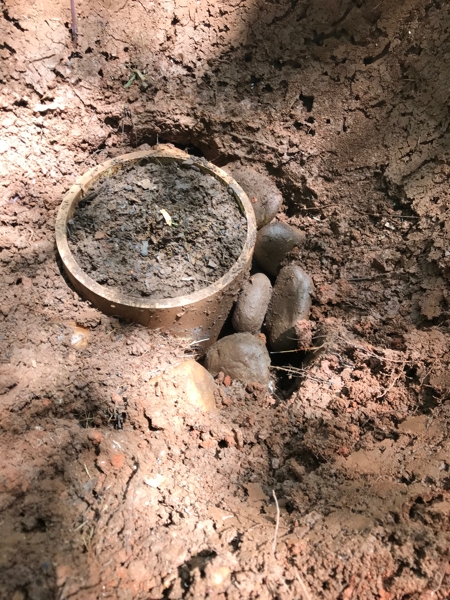 The pipe had to be cleared out; I decided to leave the outer rocks alone.  Ick!  I may regret that, but if it becomes a problem, I’ll go back in.  Some day. Cras melior est, as they say. 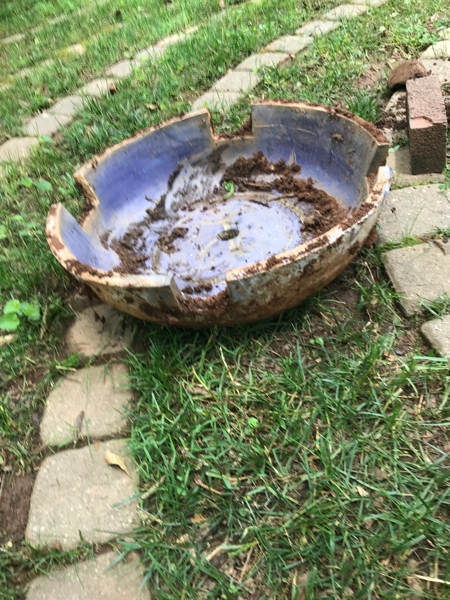 Slow work, digging out the muck and removing the river stones that filled the pipe.  I had put the stones in there with the idea that when water collected at the bottom of the pipe, mosquitoes would be too lazy to work their way down to it.  I think it worked. 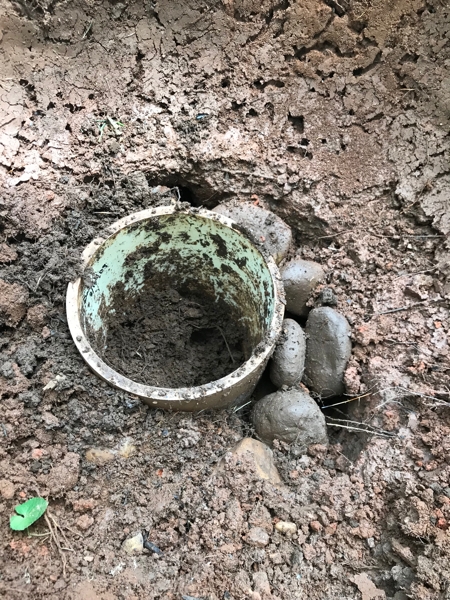 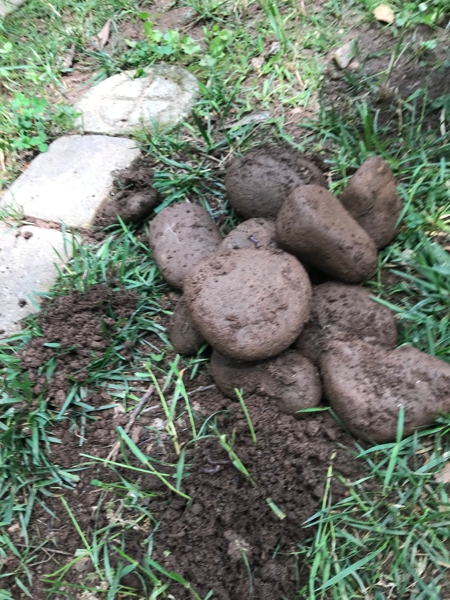 Done. I didn’t dig all the way down to the bottom of the pipe, because my arms wouldn’t reach much further.  Also, my plan was to create seals between the bowl, the pipe, and the granite, so that there wasn’t as much leakage of dirt into the bowl. 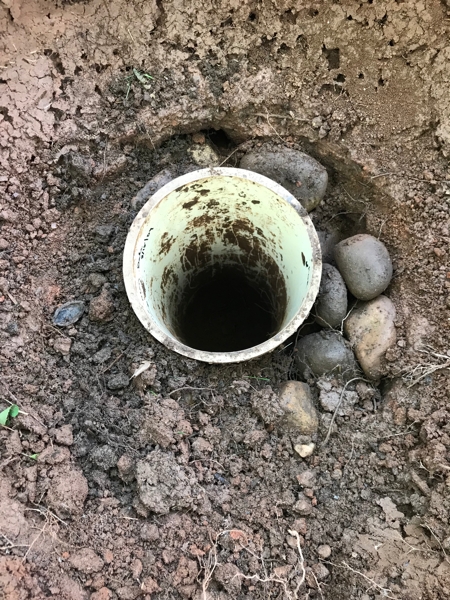 The bowl, all clean.  There is a message on the bowl, on the bottom, I think, that I wrote when I installed it, something about finding your path.  I chose not to look for it. 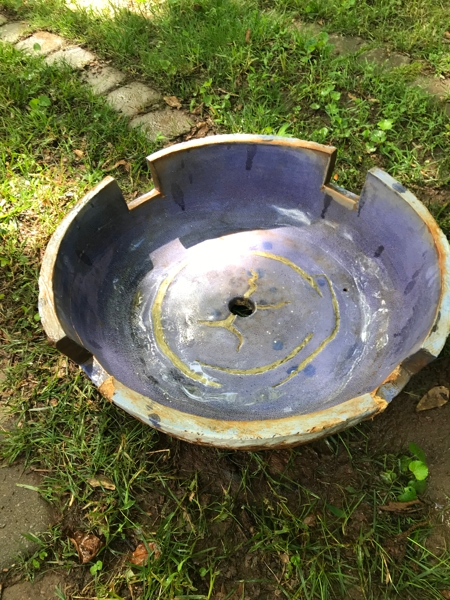 I had no clue what I was going to use to create the aforementioned seals.  These notches seemed problematic. 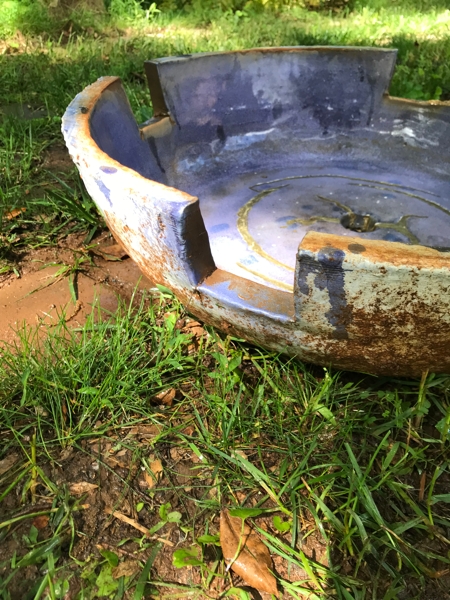 I headed to Home Depot and lo! there were these pipe insulators, rubber… 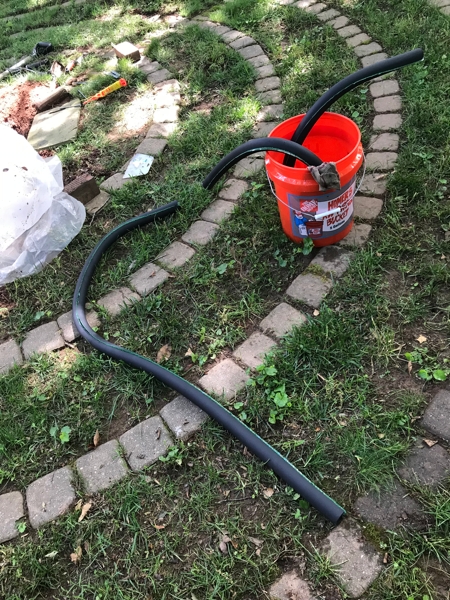 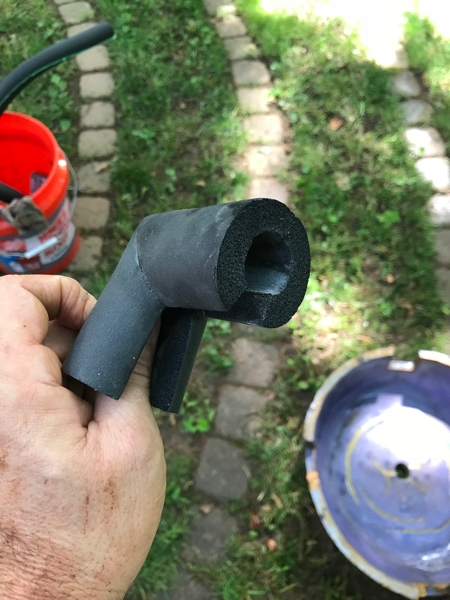 I also decided to use some landscaping bricks to help level the granite. 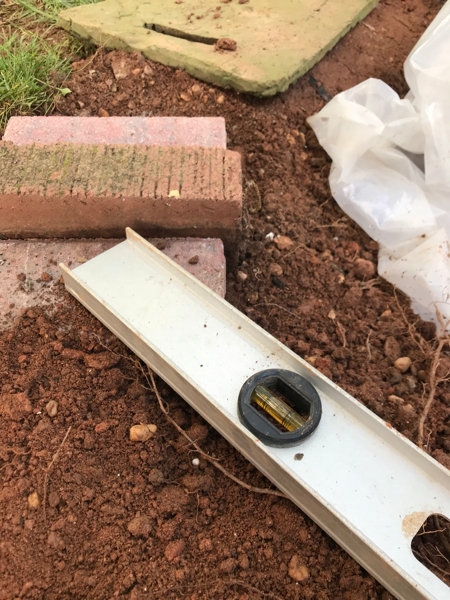 And here’s where I left it Friday afternoon. 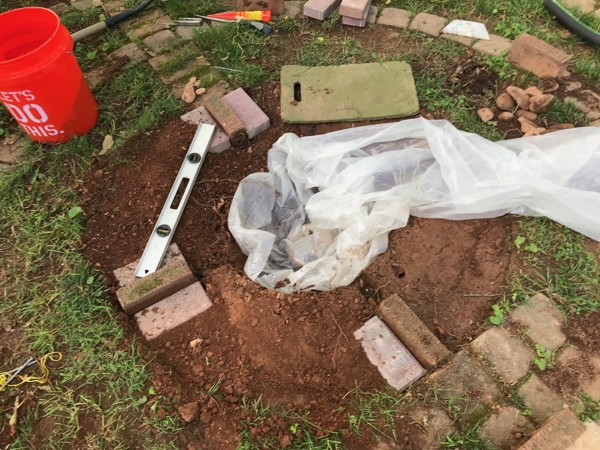