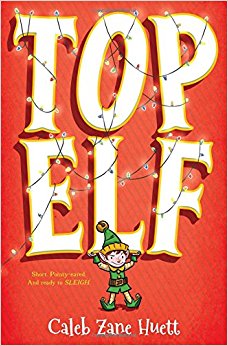 Yes, I know that every day before Thanksgiving that you decorate for Christmas an elf dies, and honestly I wasn’t going to read my friend Caleb‘s new book Top Elf until December, but one night I picked it up and then couldn’t stop.

Caleb was an RA at GHP back when I was director, and now he works at Avid Bookshop in Athens, GA, which is owned and operated by another former RA, Janet Geddis.  Both are extremely wonderful people, and so when I read that Caleb had written a book — not only written but published — I was excited for both of them.

So I ordered it and got my autographed copy (thank you for the kind words, Caleb) and tried not to read it until December. Which I failed to do.

Top Elf is a whiz-bang adventure, narrated by Ollie Elf, a youngster who loves loves LOVES Christmas.  He’s also a nervous child, often doubting himself and bursting into emotional tears.  When Santa announces his retirement and a competition to replace him — unnerving his oldest son Klaus — Ollie and his best friend Celia decide they’ll go for it.  We follow them through the familiar tropes of reality-TV competitions as one competitor after another is eliminated.

The book is thick with pop culture references, stupid jokes, and sly allusions.  Most of it would go over a younger reader’s head, but I’m sure there were some references in there that went right under mine as well.  There is a fun twist ending that I’m pleased to say I didn’t see coming, and a satisfying (if After School Special) ending. (Well, how else could you end it? Fight Club?)

I asked Caleb if it had been optioned yet for a movie — if nothing else, it would make a spectacular TV movie or even series — and he just laughed.  But if you’re listening, Hollywood (or Atlanta, at this point)…

Recommended as a Christmas gift for older elementary readers, especially those who like gaming.