Monday night we went to Enoteca, a lovely little wine bar/tapas place in Lexington.  The food was excellent, and the cocktails were solid. Except for this guy: 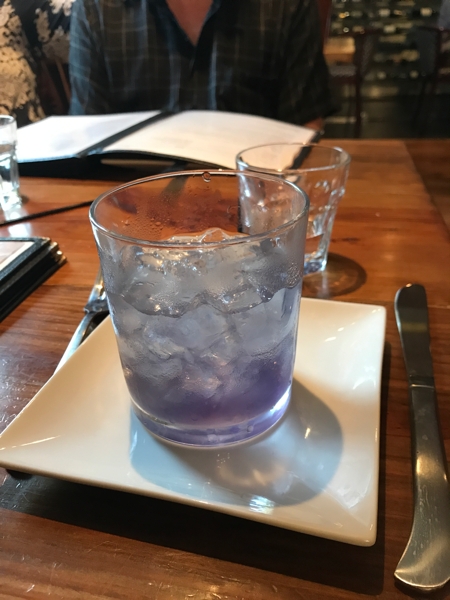 Isn’t it pretty?  Pro tip: before ordering an Aviation, no matter how interesting the gin sounds, ask what amount of creme de violette they use.  Anything more than the .25 oz. in the recipe linked here, and it will taste like perfume.

Another pro tip: if you’re looking to break up a super-long drive, do not look at the route your computer has laid out for you and use the time the computer calculates (instead of distance) to divide the trip.  Especially, if you’re a Slytherin, do not let a Gryffindor do this calculation for you without checking it.  Especially do not let a Gryffindor decide that you’ll just wing it on deciding where to stop for the night.[1] That is all.

Oddly, on Tuesday morning we discovered that we had a LONGER WAY TO DRIVE TO TORONTO THAN WE THOUGHT, KENNETH.  Personally, I think that once you’ve decided to DRIVE TO TORONTO, KENNETH, you don’t get to complain about the distance/time involved, but then I am a notorious Pollyanna.

You will find this difficult to believe, but driving from Lexington, KY, to Toronto does not yield as much blog material as, say, a cruise up the Danube, so instead of castles and gorgeous riverscapes, you’re going to get what transpired in the car.

We passed the sign for the Ark Encounter, a boondoggle of the worst kind that has left Williamstown, KY, wondering where their commonsense was when they decided to shell out $92 million for a Xtianist con.  We thought briefly about going to see this thing just for the giggles—dinosaurs on the Ark, what’s not to like?—but $40/adult is a lot to spend on a complete time waste.    Why waste time on animatronic Noahs when you can DRIVE TO TORONTO?

Model Chrissie Teigen’s tweet on the president’s “infinity” babbleygook: “Why is my ass smarter than the president??”  (I’m thinking that the White House staff has a betting pool as to when the man is going to go off script.)

Passing Chester, KY,[2] led us into a discussion of Chester the Molester and Larry Flynt, who is by the way still alive and fighting for First Amendment Rights.

Inner 12-year-old Alert: There is a Big Bone Lick State Park.   There is also a Quaker Steak & Lube restaurant.

Outside Monroe, OH, there is this: 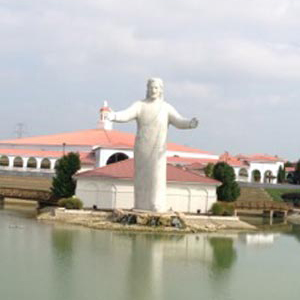 This is the Solid Rock Church’s north campus, not to be confused with their south campus: 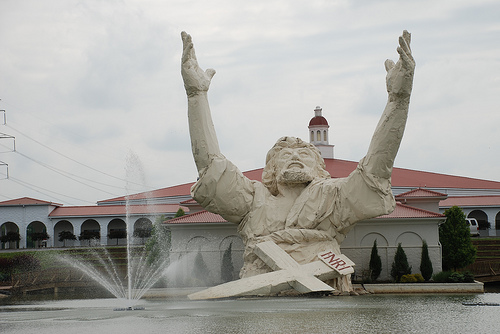 We passed the Traders World Market, which for some reason had giraffes ALL OVER ITS ROOF, KENNETH. 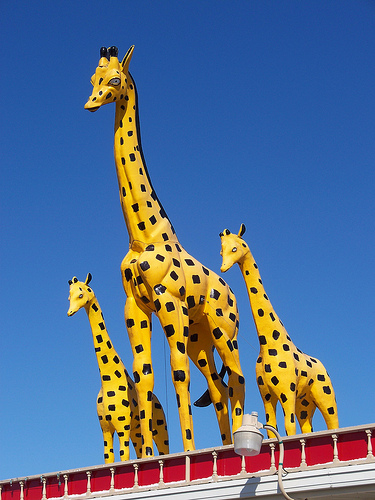 I do wish we could have stopped.  I have a weird relationship with giraffes.  If you ask, I’ll explain why they’re a symbol of destructive criticism.

I will have to say that Ohio has the most impressive landscaping of their interchanges I have ever seen: they are beautifully designed and landscaped.  Wish I had pictures.

We stopped for gas. 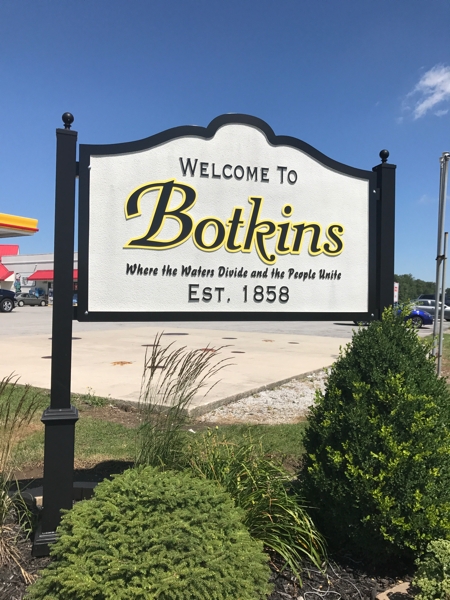 There was art next to the gas station: 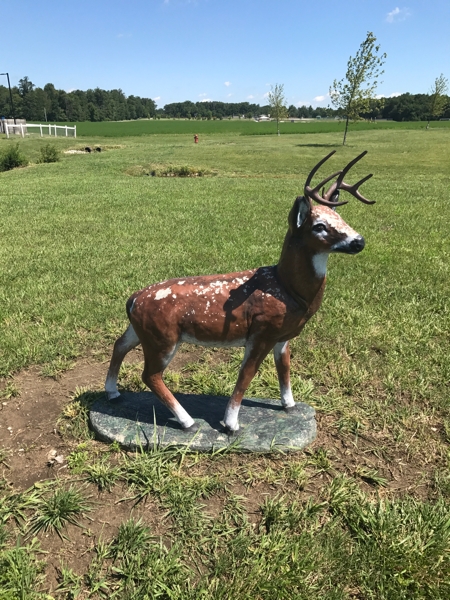 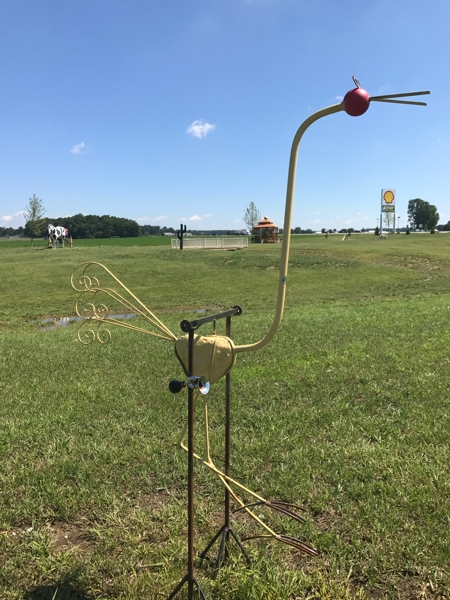 This one actually moves. 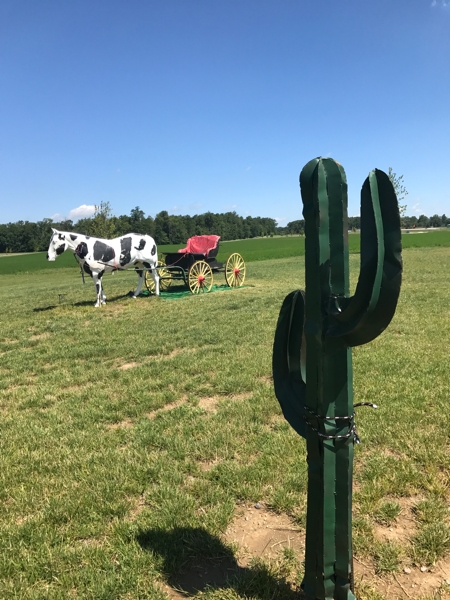 Yeah, I don’t know either.

Somewhere around here I found myself recalling that the Nazis invented the interstate highway.

When we started casting about for lunch options, we found much to amuse us: the Toot ‘n’ Tell drive-through hot dog hut; an establishment which offered chicken chunks and something called a Chunk Bowl; Kewpee Burgers, where it’s 10¢ extra for Miracle Whip on your burger; and in Findlay, OH, where we ended up stopping, The Butt Hut next to Dick’s, and the Servex Center across from Crunchy Nuts.

After lunch, we went into a Walmart kind of place for supplies, where I found THIS YOU GUYS: 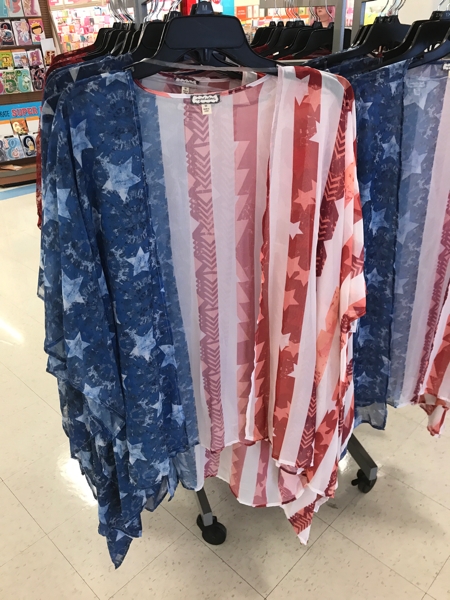 It is a chiffon poncho thing you guys! 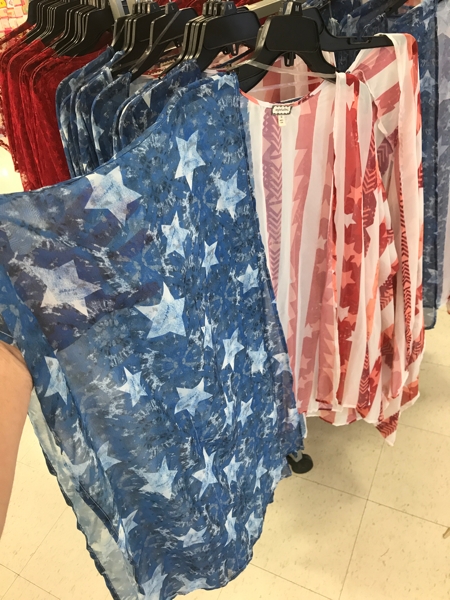 What should I wear under this, I hear you asking? 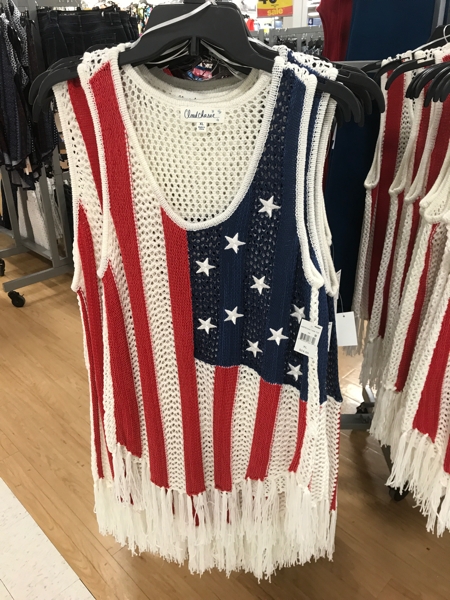 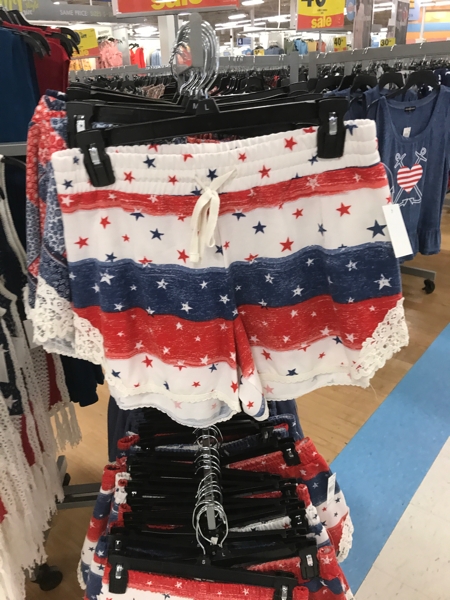 However, I was dissuaded from expressing my patriotism, if you can believe that.  Bunch of commies.

I bet if I put up a GoFundMe for another Viking River Cruise, you’d chip in right about now, wouldn’t you?

Up through Michigan, where if you hang a right at Detroit, you’re in Canada.

No really: here’s the off-ramp to Canada: 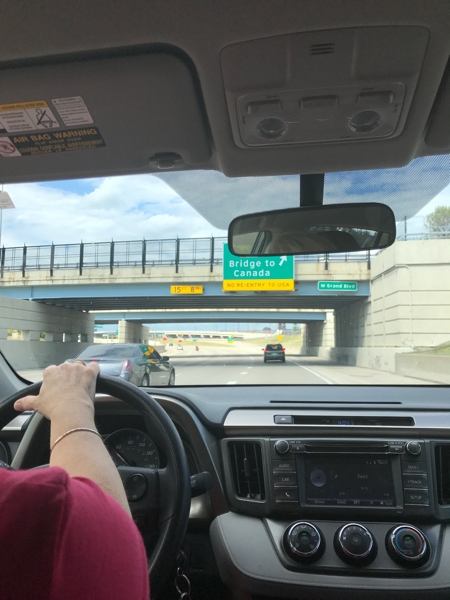 There was a car from Texas in front of us who seemed to have a momentary panic about the No re-entry to USA thing, but our attitude was, “Justin Trudeau… Donald Trump… OK then.” 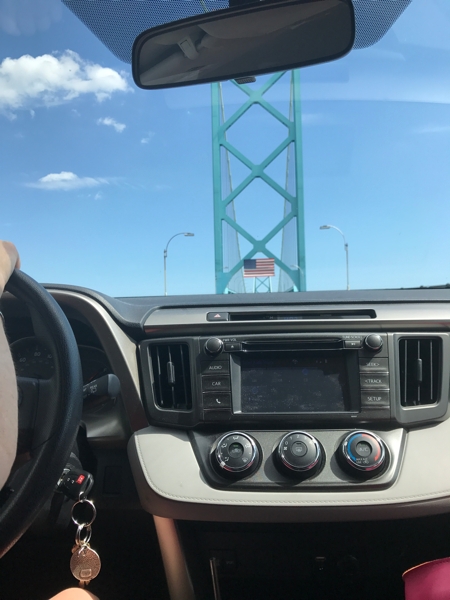 The border guard who quizzed us was markedly flat in affect, and one of our number expressed an urge (afterwards) to jolly him up, but my rule is that if the board guard isn’t already jolly, it is not in your best interest to work on that.

Obligatory photo of the border McDonalds: 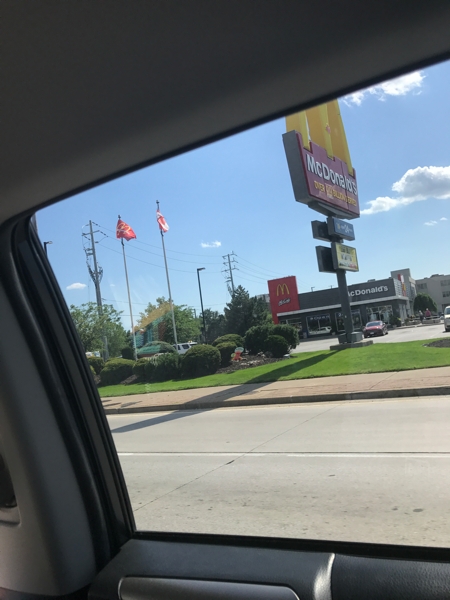 Soon enough we were in the land of the polite (you literally drive straight into the residential neighborhoods of Windsor), and then we had to DRIVE ACROSS ONTARIO, KENNETH.  Oh. My. God.  I don’t know whether you’ve ever driven across Indiana or Iowa—neither have I, but I’ve seen pictures—but Ontario has them beat for sheer uninterestingness.  It’s all lovely green farmland, with some really impressive wind turbine farms (like for miles), but one finds oneself wishing for a cluster of Walmarts and Hooters’s every now and then. 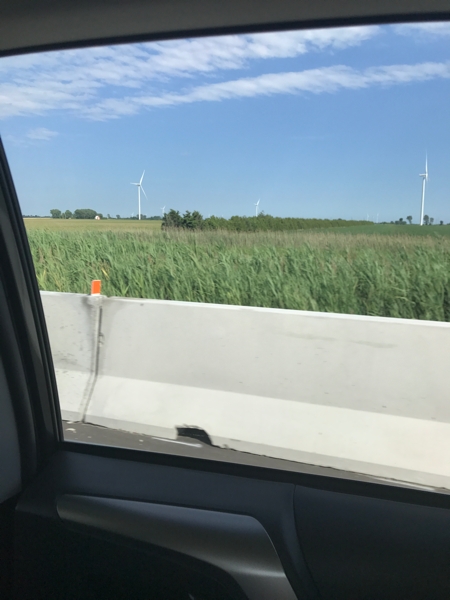 Finally, much later than any Gryffindor could have predicted, we approached Ontario, where we began this asymptotic drive to our hotel.  It seemed as if I drove and drove and never got any closer.  And of course none of us had made preparations for not having cell/data service, so we tried to find the Bond Place Hotel the old-fashioned way: with maps.

Hahahahahaha.  Here’s a photo of a stunning photograph I was able to take while stuck in traffic down on Queen’s Quay: 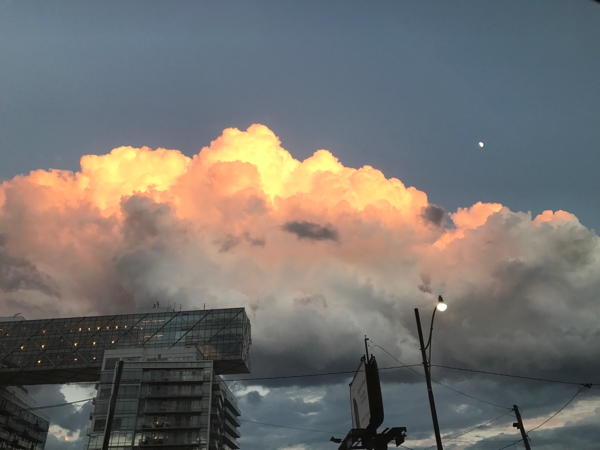 That’s the moon to the upper right.

Finally the data service I had bitterly given into kicked in, and we were led to the hotel with no problems.

We decamped to the rooftop pub across the street, and two Manhattans later all was well. 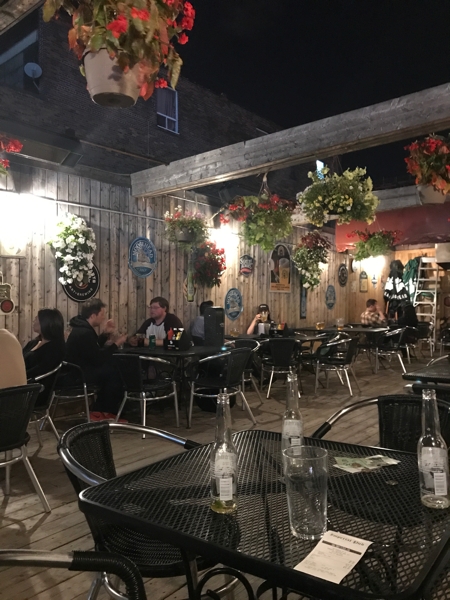 [1] When asked about this before we left, I said we’d stop “when one of us started screaming.”  Probably just as solid as plan as any.