From Krems, we sailed up to Passau.

I haven’t talked a lot about the shipboard experience, but I cannot praise the Viking staff enough.  They were without exception cheerful, pleasant, and helpful.  I told the hotel manager (that is his actual title) that it was exactly like staying at a Ritz-Carlton, which pleased him to no end.  I was not exaggerating.  One example, and it may have been the morning of this particular day: every morning I’d come up to the lounge for breakfast, which for me was simply coffee and pastries, and try to blog.  This particular morning, I had sat down with my coffee and begun my struggle with the wifi.  Suddenly Gabor, the young waiter often on breakfast duty in the lounge, appeared at my table with a plate of croissants.  He had seen and noticed my habits.

I felt like a filthy capitalist pig, but what a sweet gesture.

The morning began on the prow: 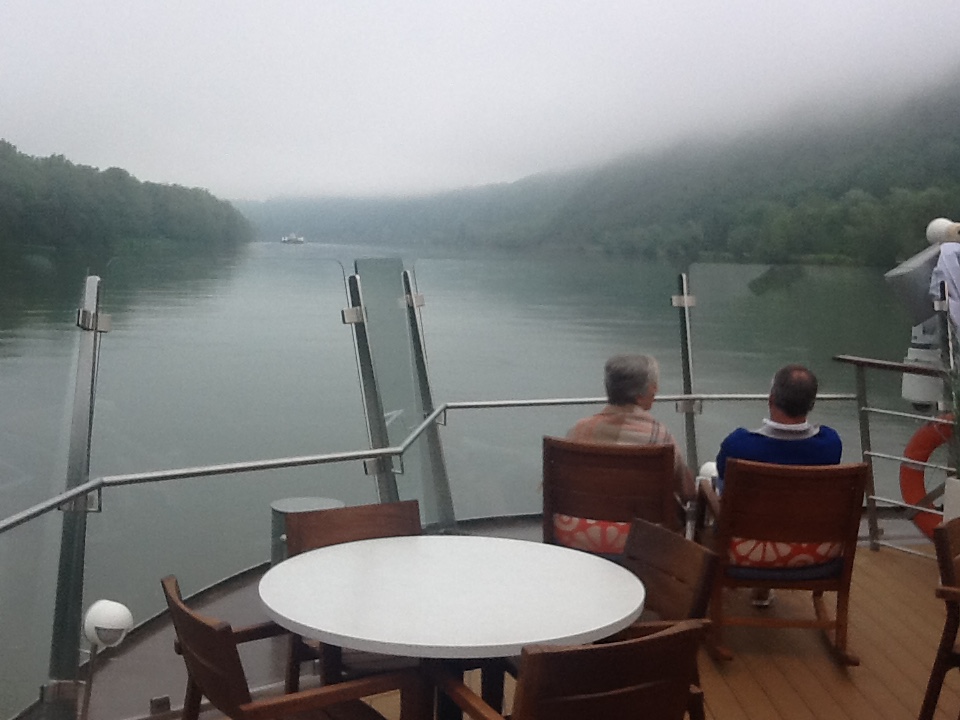 Soon we pulled into Passau.

Passau made its fortune back in the day (1400s/1500s) by being situated where three rivers come together, one of which brought salt from the salt mines around Salzburg (which of course means “salt mountain”).  Salt was worth its weight in gold, almost literally.  If you think about it, you can see how difficult it might be to procure.  Passau was the distribution point.

For the morning, we went on the walking tour.  Passau is a lovely town which survived the war mostly intact.

Here we have the Prince Bishop’s residence, right next to the cathedral.  Passau’s bishop was made an actual secular prince by the Holy Roman Emperor, which gave him extra cajones.  And cash. Before we take a look inside, pay attention to the cathedral: Gothic in origin, at least on the back end, the choir.  It burned and was rebuilt.  Hold that thought. 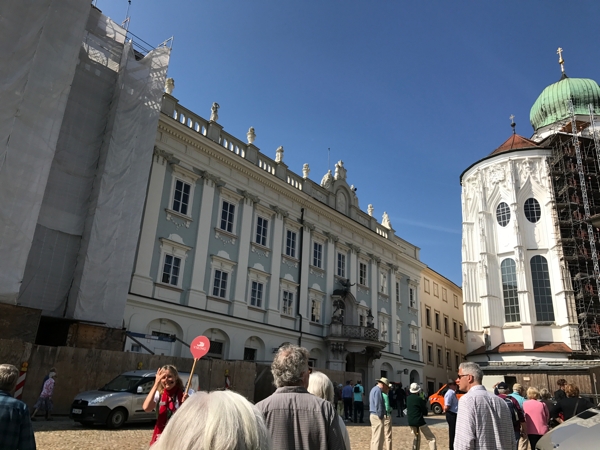 The interior of the residence is Rococo to the max.  For those who haven’t paid attention for the last 400 years, Baroque is the big, bold, gold-plated style.  Rococo, which came after, settled down into light, delicate, pastel swirlies based more on natural forms like seashells and plants. 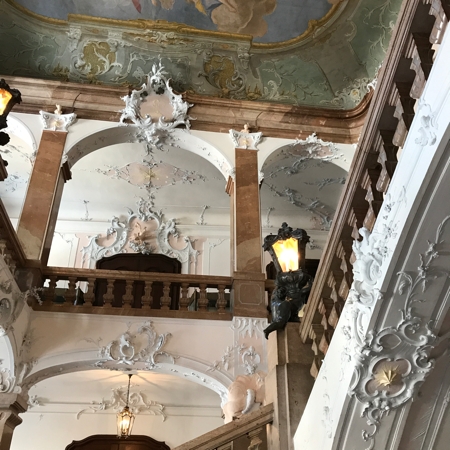 Rococo could be irregular in the extreme… 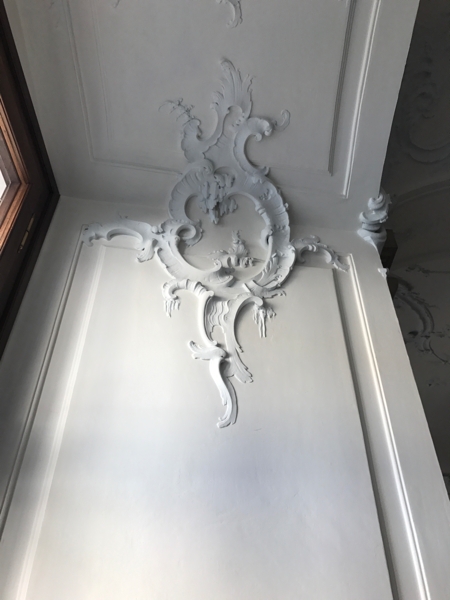 … with the decoration getting loose and crawling outside the lines. 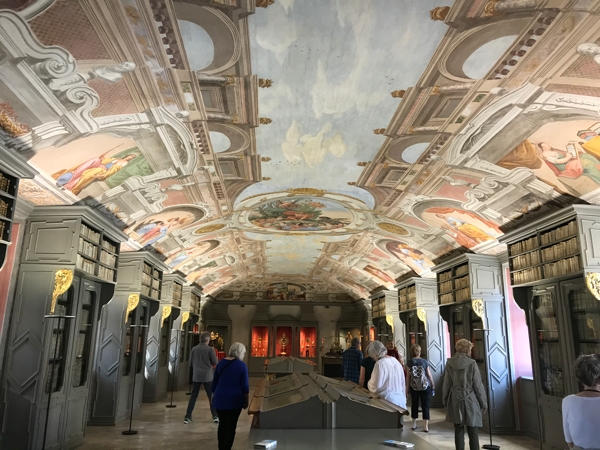 With some of his handbound volumes: 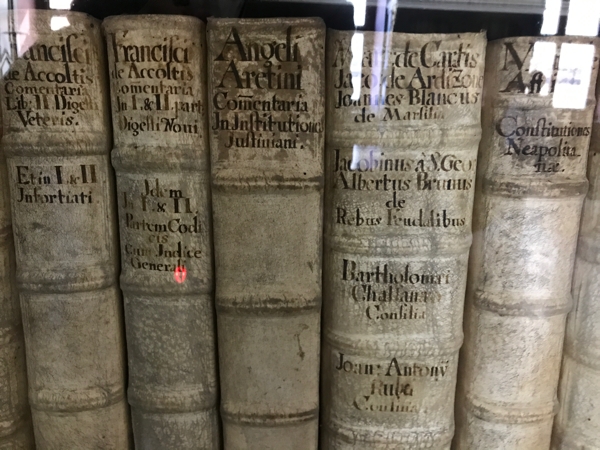 We were slated for a concert there in St. Stephen’s Cathedral, which boasts the largest organ in Europe.  When I say “boast,” I absolutely mean “bragging.”  The fervor with which every tour guide touted their hometown was charming.  Passau also has a thing about their St. Stephen’s being the “parent church” of Vienna’s St. Stephen’s. (As history progressed, nearly every place we visited had its turn as the capital of Bavaria, and they have not forgotten that.) 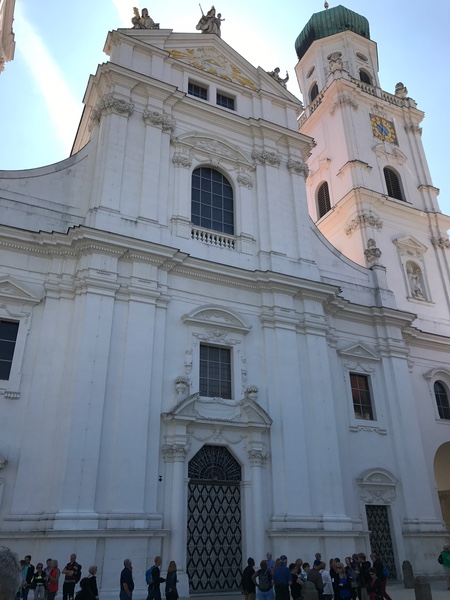 Solid, even austere, Bavarian Baroque.  And then you walk into it. 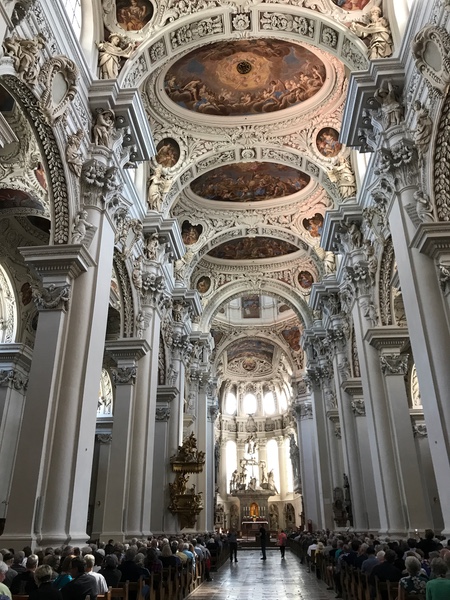 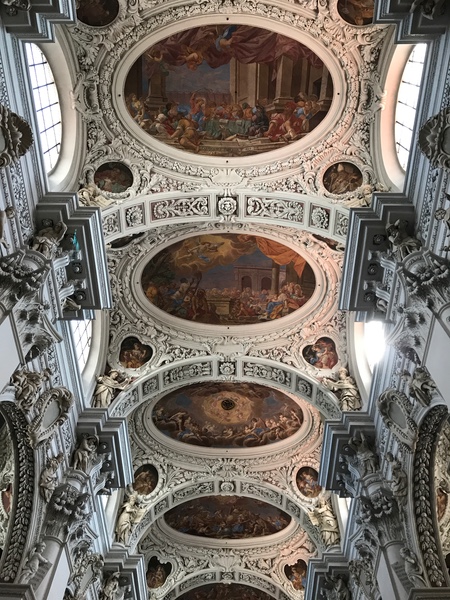 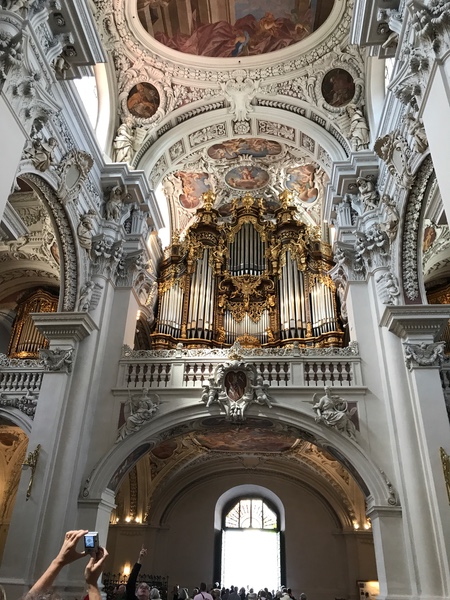 There are five organs distributed around the nave, one even in the ceiling.  They can be played independently, or as in this case, all linked to the main console.  The concert was therefore a bit of a showcase with the full range on display, and of course a thundering finale.

We were hurried out by the officials after the concert (there was another one immediately following), but I did get a couple of interesting shots.

The altarpiece is modern, a portrayal of the martyrdom of St. Stephen: 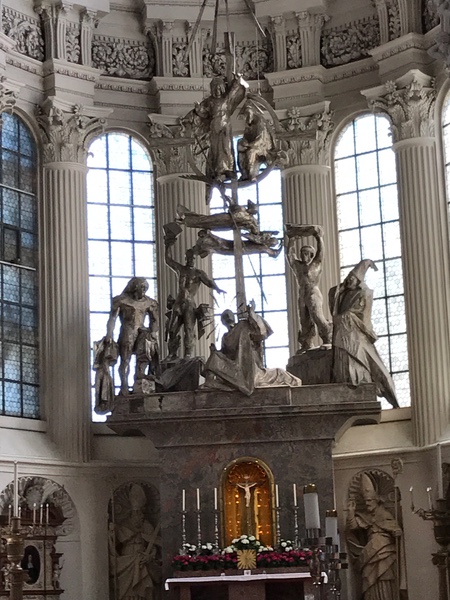 And up in a little corner: 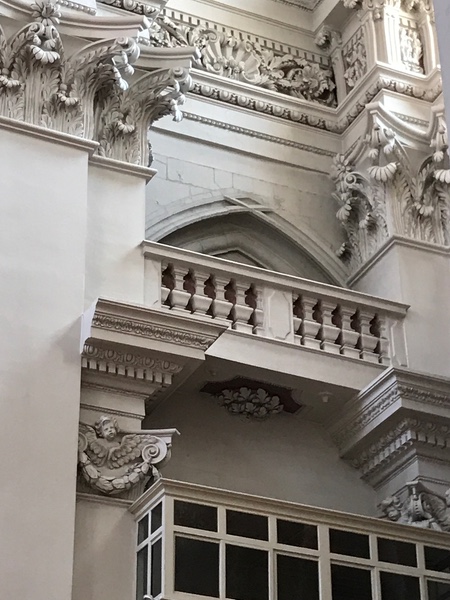 A little piece of the original Gothic interior.  I don’t know whether the Baroque architects left that exposed for some reason—I’ve never known earlier periods to be that preservation-conscious—or it was uncovered in some modern restoration and left as an indicator of the original changeover.

After lunch, we joined a group going out to the countryside to what was billed as a “Bavarian Beer Fest.” This is a newish event for Viking, and it needs some work.  The farm was lovely: family owned and operated for eight generations; handsome father and beautiful daughter were our hosts.  They board horses, host equine events, host weddings/events, do some farming, and run a small sawmill.  The tour thing is new to them as well.

The mother of the family, whom we did not meet, has decorated the place with a sure hand.  We were very impressed. Some examples: 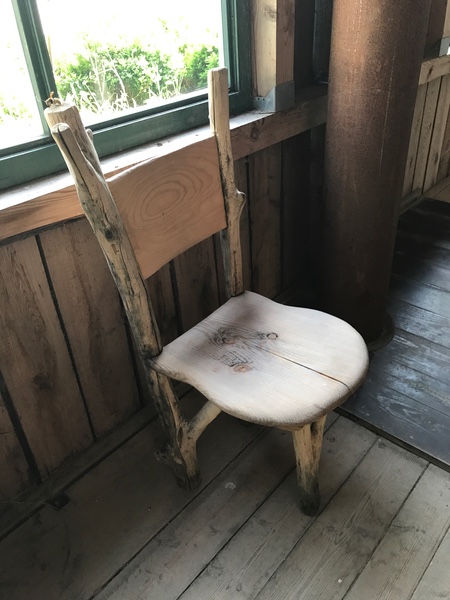 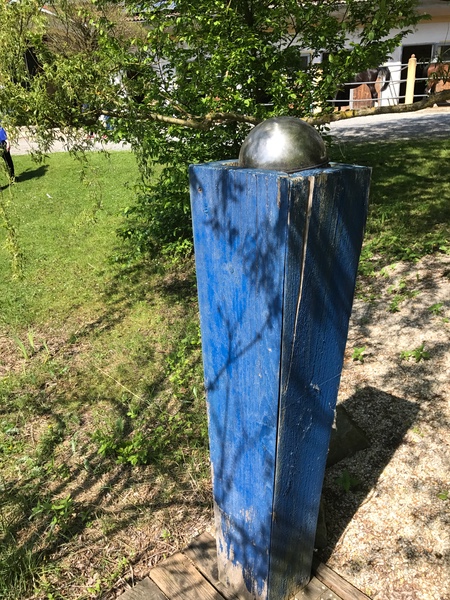 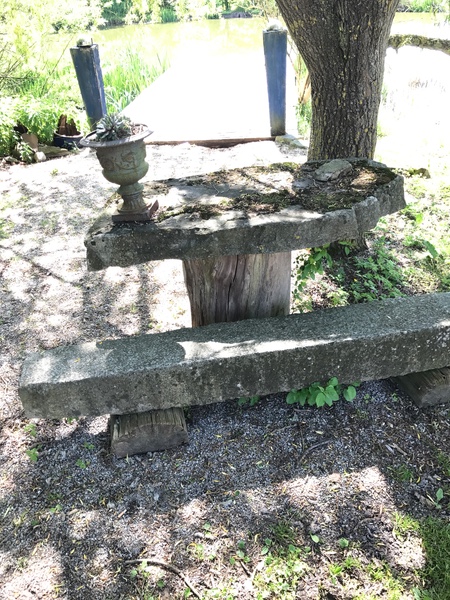 We were treated to a verging-on-silly traditional Bavarian beer party.  (We had thought it was going to be a beer tasting, with multiple beers, but it was not.)  There was a keg of locally brewed beer, plus traditional foodstuffs.  There was an accordion player, some singing, some dancing.  Our host—who, I must repeat, was a traditionally handsome Bavarian—performed the Schuhplattler.

And then he asked for volunteers.  So of course my party shoved me up there. We went into another room and were given five minutes to learn it.  I had a small advantage: my Charming Child had studied in Munich ten years ago, so I knew what it was and how it worked though not the specific steps, and of course I was a dancer in my youth.  However, I was still entertainingly inept when we went out to perform it.  As Mr. Bennet says, “For what do we live to make sport for our neighbors, and to laugh at them in our turn.”

On the way back, our tour guide took us up to the Oberhaus: 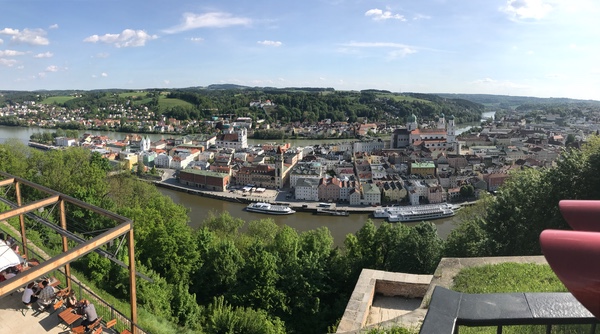 The Danube is in front; the Inns River in the back.

At the very beginning of the day, I had received an email from one W. Jeff Bishop with a list of corrections he needed to make in his new book, Agatahi, which I had designed and laid out before I departed for Europe.  He understood that I wouldn’t be able to do anything until I got back, but nevertheless he persisted.  I replied with the photo that started this post.

His reply was unprintable in a family blog like this one.  When we got back to the ship after the farm tour and I read his reply, I sent him this photo: 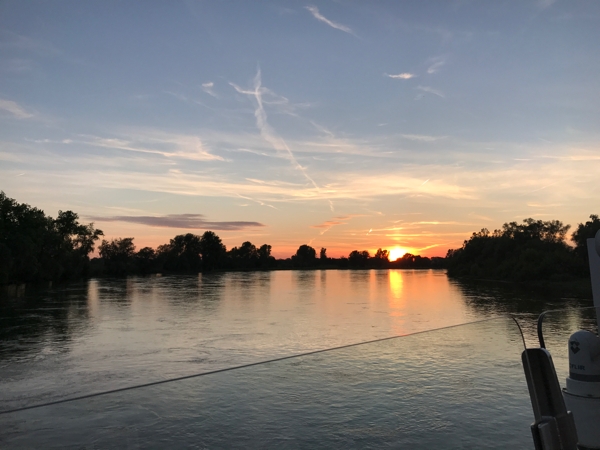 His reply to that one was even more unprintable.