Last week I started talking about a thematic approach to 5th grade U.S. history curriculum that a teacher and I designed (but never were able to implement.)

short version: instead of slogging through events 1852-1996, wherein students would be without context year after year, we would approach the topic through themes, neatly covering all 20 curriculum standards multiple times while doing so.

The four themes were

CONFLICT focused on the wars fought by the U.S. between the Civil War and the Iraq War.  POWER focused on political power (including voting rights), economic control, and the change in the U.S.’s global power.  CHANGE focused on technological and social changes. Finally, COMMUNITY focused on all of the above as experienced by Newnan/Georgia.

Ambitious, to be sure.

I will now pause and lament the fact that while paper files will sit in that storage unit until you decide you want to throw them away or actually use them, electronic files are not so durable.  I went looking for the lesson plan template I developed for use at Newnan Crossing with our Enriched Thinking Curriculum, but that was so long ago that nothing will open those simple word processing files, which as far as I can remember were written in AppleWorks.  Oy.  If I have the energy, I’ll recreate it in Word or something and upload it, because it was good.[1]

The nine weeks we were to spend on CONFLICT were organized to have students answer the essential questions:

Ridiculously ambitious.  But I’d rather fail bigly than play it safe with mere memorization. 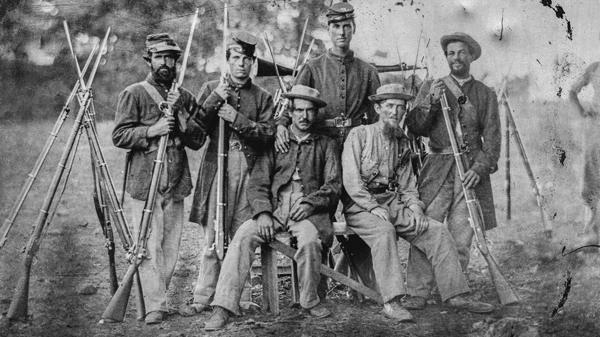 There are five units in my folder on CONFLICT.  Each would probably have taken three to five days in the media center plus time in the classroom.  I note that the date on these pieces of paper is 1998, so our internet access would have been rudimentary.  Google didn’t exist.  Yahoo did, but it was a hierarchical search engine.

The first unit, The Wars of the U.S., was an introductory lesson.  Pretty simple: teams of students worked together to come up with a list of all the wars/armed conflicts the U.S. has been involved in since 1859.  The actual agenda of the lesson was to introduce the essential questions and to train the students to think independently using the Big 6 as a framework.

The second unit was Producing Context: What did war look like?  Teams of students were assigned specific wars and asked to find images of that war.  The idea was to start a visual timeline to reinforce the sequence of conflicts.  Plus kids love looking up uniforms and weapons.  I note in the materials list a “How to print an image from a website” handout, so we must have had at least that capability.

The third unit was Producing Context: A timeline.  Pretty simple: the class creates a timeline of the U.S. and embeds the wars in them.  Who were the presidents?  What else was going on?  (Here we sneaked in all the other things we would encounter in the other thematic units.)

The fourth unit was Producing Context: What did war feel like?  This one was fuzzier, but the gist was that they would read/watch a variety of first-person accounts, both historical and fictional, about the wars in question.

The fifth unit was Conflict: Defining the problem, and it was then that students would begin tackling the essential questions.  What will they need to know about each war to make their decisions?  Can they construct a “model” for assessing U.S. wars which will give them a basis for comparison?  Here are some bits of the lesson plan that are pretty cool:

That’s long enough a post for today.  Next I’d like to circle back and look at all the pieces of educational research that I had pulled together for this entire approach. Stay tuned.

[1] Here it is, a downloadable Word doc.