Astoundingly, I have not been blogging about this year’s production of A Christmas Carol, my musical retelling of Dickens’ classic.

To be honest, it’s been a scary rehearsal process, starting with the first night of auditions.  Why?  Because instead of the 20 or so adults I needed to perform the roles and sing my not-very-easy songs, I got eight little girls and a handful of teens and adults, most of whom had not done theatre in a while.  And on top of that, several of the adults dropped out the first week of rehearsal; I’m sure they were daunted by the prospect (as you will see).  I’d hate to think they thought it was not going to work.

Usually in community theatre when one does not have the cast one needs after auditions, one gets on the phone and recruits people.  But I was not in the mood, and on top of that I was up to my earballs in designing the nation’s largest regional burn at the time, if you will recall.

And so I made a fateful decision: we would use the performers we had and screw all those people who didn’t bother to come to auditions.  This meant, of course, re-envisioning the entire piece.

I decided to invent a frame story—I know, I know, but hear me out—about Natalie Fairgood, a spoiled, horrible little rich girl, who was born on Christmas Day and resents it because she feels as if she never gets enough presents.  That’s why, she says, she celebrates the week after.  This year she’s having a sleepover with all her friends, but she’s been forced to invite the daughter of her mother’s personal assistant, Jessica. 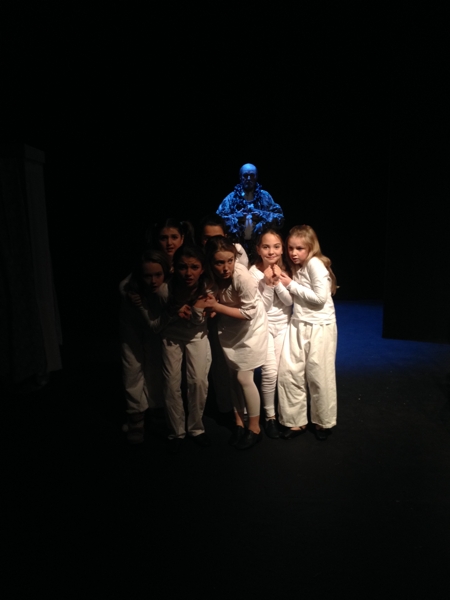 When the show opens, Natalie’s grandfather shows Jessica into Natalie’s bedroom and chats with her a moment before leaving her to wait for the other girls, who are somewhere in the huge house.  When they enter, Natalie immediately begins taunting Jessica, ending in  a meltdown because Jessica is holding one of her dolls.

Grandfather intervenes, and when he offers them storytime to chill them out, Natalie demands a ghost story.

Figures emerge from the shadows and begin to narrate as well, and soon we are back in Scrooge’s tale.

As the show progresses, the girls go from being passive listeners to Grandfather’s reading to observing the action directly.  Soon they are taking part in the story, using toys and costume pieces from Natalie’s shelves as they become guests at Fezziwig’s party to shoppers on the street to Young Cratchits.

By the time we reach the Finale, they are fully empowered to join Grandfather in telling the story themselves, and that’s the point: we celebrate the power of story, how we listen to stories, become part of them, and in turn pass them on to the next listeners.  Hearing a story changes us.  Telling a story changes us.

And by the end, both Scrooge and Natalie have changed.  And so have we.