Given that it’s been too hot to do any outdoor maintenance, and given that we’ve had no rain, it should come as no surprise that the labyrinth is a minor disaster: the grass is dead, while the ivy/bamboo/privet/wisteria have run riot.

Normally, that would not entail a lot of worry.  Just get out there and kind of work it out as one moseys through life, ne-ç’est pas?  However, in a moment of weakness earlier this year I agreed to allow the labyrinth to be a part of the Presbyterian Preschool Tour of Homes on December 3.  So now I am under a deadline, which at least will get the job done. 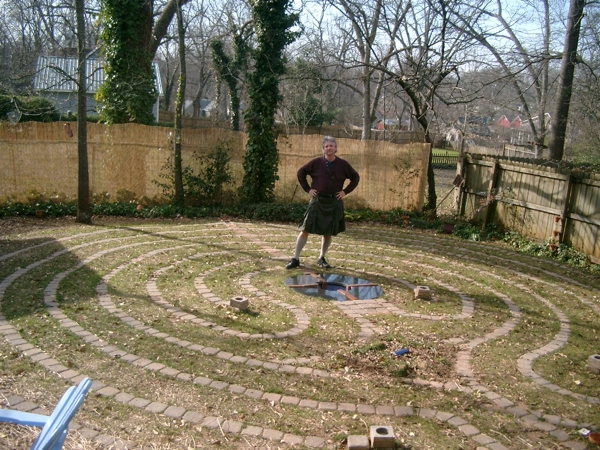 Here we have a happy labyrinth owner installing a new bamboo fence over the original chain link fence six years ago. This was for privacy, of course, and it was quite lovely, although as you can see it did not completely block anyone from seeing into the yard.  I was not worried, since I knew the ivy would grow up over the bamboo and provide cover.

Which it did, and that worked—until the bamboo began to rot and break down. 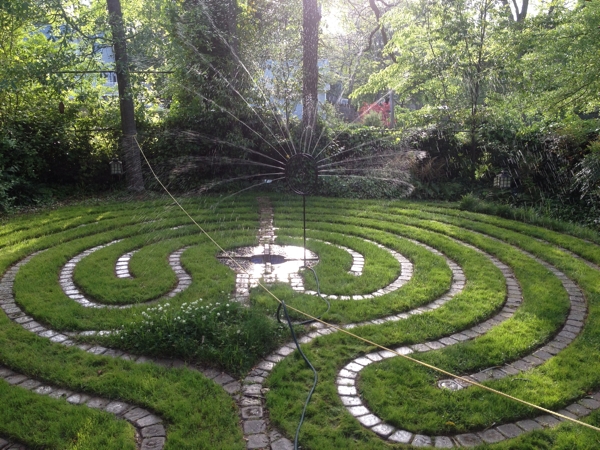 Here we see, if through a lovely sprinkler earlier this year, the wild and woolly state of the fence.  (That lush green grass died almost immediately.)  It was really ratty looking, and that included some rats who would trot about on top of the chain link.

And so I’ve been looking for someone to replace the chain link with a real fence.  I tried dealing with a builder recommended by a neighbor, but that person led me on (since April!) and I finally turned to Angie’s List, where I found First Fence of Georgia.  I highly recommend them, although parts of this process may give you pause about hiring them.  Ignore the roadbumps: this is a good company.

I really wanted an 8-foot fence, given the proximity of my neighbors, but city ordinances only allow 6-foot fences.  I could have applied for a variance, but by the time I hired First Fence it was too late.  So I asked First Fence to install a 6-foot fence with 8-foot posts; I could, if I wished, install art stretched between them, art that might even look like curtains.  Or summat.

The crew arrived at 8:00 a.m. and got straight to work.  Every now and then I’d wander out and smile brightly at them.  Chain link—gone.  Ivy—ripped out.  Post holes—dug.  Posts—installed, two feet deep in concrete.  Cross pieces—nailed in.

And so it was that shortly after lunch I went to the back yard to marvel at their progress and found—to my horror—that they had installed 6-foot posts.

I suppose I could have been a raging asshole and demanded that they tear everything down and start over, but a) that’s not who I want to be; and b) the expense, while probably bearable by First Fence, might have fallen on the two young Hispanic men who had made the error.  Let’s face it, unless someone had specifically told them, “Remember this dude wants 8-foot posts, so that’s different than what you do every other day of the year,” it was easy to miss the one reference (in 6-point type) to the posts being 2′ taller than the fence.

On the other hand, I had asked for—and was paying for—8-foot posts.  So I stopped the work and told them about the problem.

The lead worker was calm, but crushed.  He double-checked the blueprint and there it was in plain 6-point sight.  I told him I wasn’t mad, exactly, but I was upset.  I’d call the office to see what they recommended.

By the time I had spoken to the office (and been told the person to whom I needed to talk would have to call me back), the lead worker had a solution: what if we ran 2x4s up either side of the posts?  I liked it, specifying that they use cedar instead of pine just for extra safeguard against warping.  And so we did. 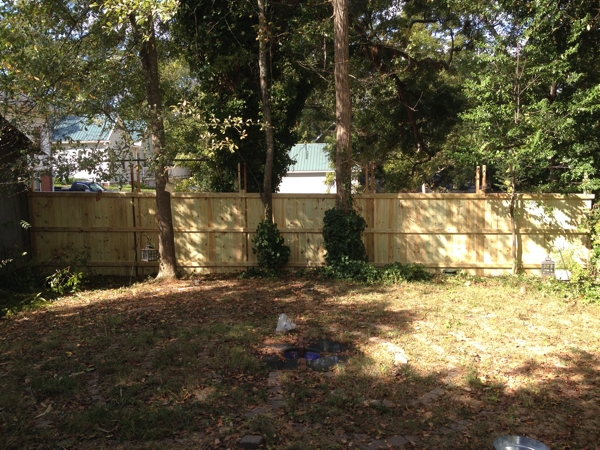 Quite frankly, even though it means that I will have to create the art, i.e., EXTRA WORK, KENNETH, I think it’s actually more attractive.  I think First Fence should offer it as a design, and I think they ought to pay the young man who thought of it royalties. 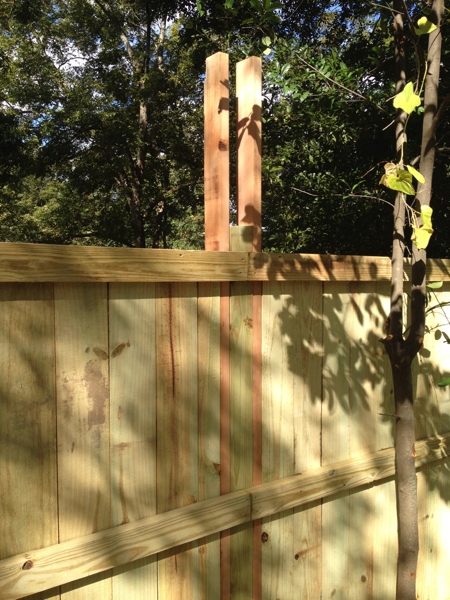