Just kidding.  The people who make these things up are impermeable to any form of logic, even ones that involve simple pictures. 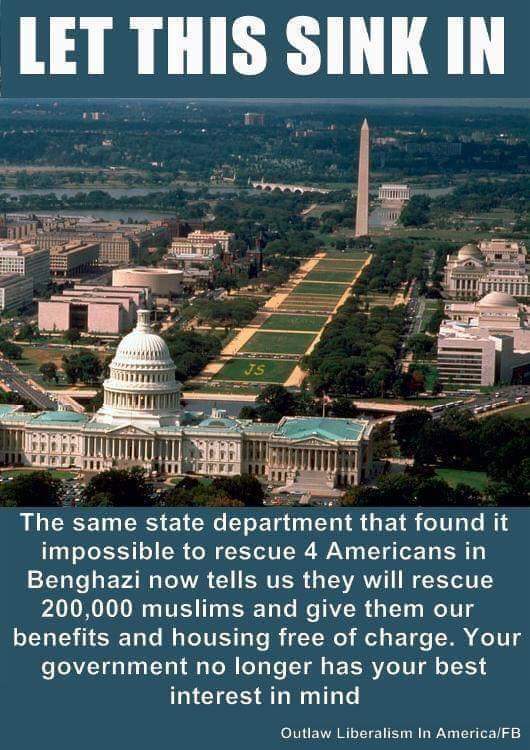 Oh, where to begin?  Let’s start with the easy stuff, the inevitable grammar errors: State Department is capitalized, please, as is Muslims, and our sentences need a period at the end, don’t they, Johnny?

#1: The State Department had an opportunity to intervene in the events of Sep 11, 2012, at the American compound in Benghazi, Libya, and for some reason decided not to, resulting in the deaths of four Americans.  The implication is that this action was deliberate, callous, and probably criminal.

#2: The feckless—and yet omnipotent—Obama administration is preparing to bring over nearly a quarter of a million Muslim refugees (a word curiously missing from the poster) and saddle our taxpayers with the cost.  The implication is twofold: a) those people are terrorists; and b) “those people.”1

First, boys and girls, before we can address the legitimacy of the argument, we should examine the truth of each presumption.

Despite the fevered dreams of the right wing, the tragedy of Benghazi was not due to the criminal masterminds of the State Department.2 To date, there have been seven investigations of the event by the Republican-controlled Congress.  The results have been published, and not one of them found that the State Department failed to take action that could have prevented the loss of life.  The most popular shibboleth amongst the brethren is that orders were given to military air support/rescue missions to “stand down”; no such orders were given.

Currently Trey Gowdy and the House Select Committee have covered themselves with embarrassment by digging and digging and digging for two years to find something—anything—that would justify its $7 million cost so far, and yet they have not issued a report despite taking longer than the Watergate investigation.  Popular opinion is that they are waiting until the Democratic convention or the election to release something embarrassing to Hillary Clinton, but I’m beginning to believe they’re stalling because they have nothing and they know if they release a report it will knock the props out from under their favorite hobbyhorse.  As long as they keep mum, then they can continue to insinuate that Clinton is History’s Greatest Monster™ without having the media call them the liars they are.

As for refugees: Nope. Nope.  And nope.  And benefits?  Here you go, straight from the horse’s mouth.  (As for Social Security benefits, nope.)

So, both presumptions are lies.3

Even if we believed that both presumptions were true, however, the argument is still specious. The events of presumption #1 were essentially an act of war, as in “fog of” and all that.  Events on the ground were fast, furious, unknowable, and unstoppable.  Much hay has been made of the fact that the first official statements on the attack said they were triggered by some YouTube video, but the only stone I would cast would be to advise government officials against saying anything definite while events are unfolding.  You know, like “Donald Trump is possibly bankrupt.  ALLEGEDLY.”

Meanwhile, even if we were preparing to flood our fair nation with 200,000 terrorists, the process there is an excruciatingly deliberate 2-year process.  Plenty of time to send in rescue helicopters.  Or something.  These people aren’t good at thinking their parallel situations through.

In other words, presuming the incompetence of the State Department in handling a terrorist attack does not lead to the same presumption about a process which is part of their daily job description and which has been for a very long time.

Come on, people, peek out from behind your amygdalas a little bit and see if you can find better, more logical reasons to overthrow the government.

(And of course, we would be remiss if we didn’t examine the little attribution in the lower right corner: “Outlaw Liberalism In America.”  Honey, please.  Grammar note: it’s usual not to capitalize prepositions.)

1 You know, “those people.”  The ones who get all the free stuff, and not just the pitiable amount given to our deserving (white) poor people. “Those people” get the good welfare that allows you to buy crab legs, iPhones, and new cars.

3 I know, but pretend you’re shocked.