This message is intended for those who are going to vote for Donald Trump. Please feel free to pass it along to someone like that.

Warning: there’s a lot of reading here. I’ve linked to original articles, but I will summarize each. Trust, but verify. (But you can trust my summarization.)

Dow Chemical was involved in a class action suit that was on the docket at the Supreme Court. When Antonin Scalia died, Dow settled the suit because they could not count on Scalia’s vote against the citizens suing Dow. They said so. This is not liberal fantasy. They said so.

“There is, however, a very great risk that, in the absence of Justice Scalia’s influence, a majority could in fact vote to affirm the Second Circuit case, which would result in binding Supreme Court precedent and create a potentially insurmountable obstacle to the practice and enjoyment of those rights elucidated in the Heller decision.” (Here’s an actual news article about the case.)

Republicans almost always side with corporations over us citizens. Note their stated (and continuing) opposition to the Consumer Financial Protection Bureau; the refusal to allow Medicare (Part D) to negotiate the price of medications with the pharmaceutical companies; or even support for predatory lending companies over our service members.

This preference for capitalist cronyism over the private citizen also manifests in the fetish for privatization: jails, internet service, defense mercenaries, schools.

Got it? Nestle wants to privatize water systems. To protect humanity, of course. It’s a privilege to pee.1

updated 3/21/16 to add: Bills Would Make It Easier to Privatize Public Water Utilities and Chris Christie Is Turning Tap Water Into a Private Commodity

Flint, Michigan. Look up your own articles.

Nestle, with the support of Republican lawmakers,2 privatizes your water system.

They bungle it. Your water is unsafe.3

You and your city file a class action suit against Nestle because you’ve suffered significant and irreparable damage.

The case works its way up the appellate system, and finally the Circuit Court rules in your favor. Nestle appeals to the Supreme Court. 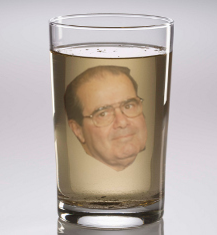 Here’s the question you have to answer honestly to yourself: Do I want my recourse to compensation and damages handled by Antonin Scalia?

I put it to you that even if you hate Hillary Clinton with the heat of a thousand suns, even if you fear that Bernie Sanders is going to turn the U.S. into a communist hellhole,4 even if you’re positive that Donald Trump is going to somehow make America great again5—you might want to rethink your long game in this one respect alone.

Don’t vote for a candidate who’s going to nominate Antonin Scalia to the Supreme Court. The life you save may be your own.6

1 I know, conflicting messages in that one.

2 And the support of any corrupt Democratic ones who are on the take from Big Water—but trust me, it will originate and find its main support from the Republican Party.

3 “But a corporation has to maintain safety/not harm customers because…” Because why, exactly? You’ll take your tap water business elsewhere? They might get sued?

5 Spoiler alert: he’s not. Nope. Not going to happen.

6 Because even if you stop abortions from ever happening ever again,7 the resulting children are going to be poisoned by Nestle.