Yesterday I proposed a scale to delineate a person’s approach to woo, i.e., their willingness to grant the woo in question an independent reality, howsoever they defined it: New Age energy, the Force, mana, God. It’s important to realize that this mindset (Existential <—> Spiritual) is the subject’s “resting state,” in the absence of any particular woo encounter.

But after woo is encountered, what is the subject’s response? What is his willingness to experience or interpret an event as woo?

Before we define the scale, the question arises: can a person who is more Existential than not actually experience woo? I think they can, and I don’t think we can say it’s any less “real woo” even if we take into account that bane of social researchers, suggestibility.1 As I said in yesterday’s post, we should not discount an inner reality just because it cannot be measured by calipers.2

Response to woo: the Realist

The Realist’s response to an encounter with woo is, in a nutshell, “Bah! Humbug!”  (For those who may not have ever thought about what this phrase actually means, humbug is quackery or bullshit.)

The Realist may be completely gobsmacked by a tarot reading or prayer session, but he is apt to put it all down to physiology or coincidence or, of course, suggestibility. He takes a good hard look at Marley’s face and sees that it is, after all, just a door knocker.

Once again, this is not meant to be derogatory, merely descriptive of one possible response to woo. Given the elastic reality of woo, it’s only smart to think that the disturbance in the Force which you felt may be an undigested bit of beef or a fragment of underdone potato.3

Response to woo: the Mystic

On the other end of the response axis is the Mystic.

The Mystic will emerge from an encounter convinced that he has encountered woo of some sort: his chakras are now balanced, the crystal has opened his Third Eye, God has spoken to him. Again, the question of “real woo” need not concern us at this point, only that the Mystic has interpreted his experience as woo.

Now we have our second axis: 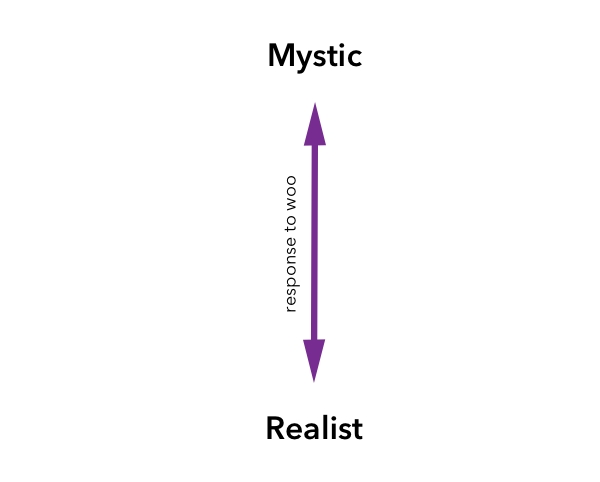 This scale is even more slippery than the Approach axis, because people definitely have different expectations and tolerances for all the various woos of the world. The same person who offers to pray for your illness may scoff at Reiki. Someone who loves a good tarot reading may look askance at a good smudging (although to be sure that is less likely than the first scenario). Those who speak in tongues do not practice Feng Shui.

As S. Elizabeth Bird found in her study of tabloid newspapers, people will often believe one kind of woo while rejecting all the others. (In For Enquiring Minds, for example, those who read The Weekly World News at all seriously were apt to do so for one topic. The Elvis believers thought the aliens were bogus, and vice versa.)

But even if we need to apply the scale on a case-by-case basis, it still allows us a descriptive, and I hope useful, framework.

Next: The four types

1 Thanks to Marc Honea for keeping this concept in the forefront of my mind.

2 I’ll take up the issue of “real woo” in another post.

3 Yes, I know that by using Ebenezer Scrooge as my exemplar makes it look as if I’m disparaging our Realists as merely unconverted Mystics, but I am not. Besides, Scrooge’s “humbug” turned out to be real enough, wasn’t it?

One thought on “The REMS Scale: The Response to Woo”