Yesterday we looked—vaguely—at what we meant by the woo experience: that feeling that there is an “energy” other than/bigger than/inclusive of us, manifesting itself in things like chakras, crystals, auras, magick, and religion.  Today I want to look at the first of the two axes of the REMS scale, that of approach.

Approach to the woo experience: the Spiritual

By approach, I mean the individual’s inclination to grant woo an independent reality. On the far end we have those who have their horoscopes cast and consult with their psychic adviser on a regular basis. They sleep with crystals under their pillow. They post photos of a beautiful sunset on Facebook and give God the credit. They never step on a crack so as to avoid breaking their mother’s back.

These are our Spiritual members.

It is important to me to make clear that I am not denigrating those who are on the Spiritual end of the approach axis. On the contrary, their spirits are open to the unknown, to the infinite, and I do not believe that is without value. When I equate chakra balancers with the devout of any religion, it is merely to observe that both are willing to grant an external reality to their respective woos, an external reality that cannot be measured by any scientific instrument. Yes, it is faith.

Approach to the woo experience: the Existential

On the other end of the approach axis, therefore, we find the Existential members. These people do not “believe” in anything that cannot be measured. They are the coiners of the term “woo” to deride the other end of the axis. They are disinclined to grant any external reality to the woo experience: all of your woo is inside your head.  Existence precedes essence.

And let me say here, again, that this is a perfectly cromulent way to approach woo. I would caution the Existentials among us, though, that denying woo an external reality does not necessarily mean denying it an inner reality. It’s all in your head? That is a kind of reality after all, and a wise Existential learns to accommodate that idea.  (But that is more for the discussion on Response.)

So now we have one of our two axes: 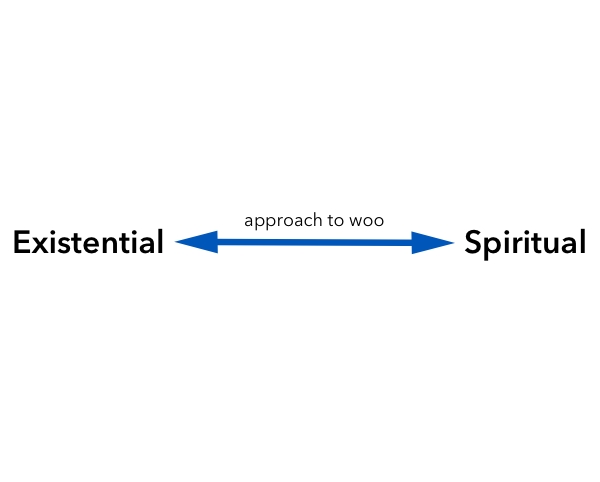 Like most axes of this nature, most people would not find themselves on the absolute end of either side of the scale. If we consider it in purely religious terms, people will range from atheist through agnostic to devout.

This, by the way, provides us with the E and the S in our REMS Scale.

Next: Response to woo

6 thoughts on “The REMS Scale: The Approach to Woo”