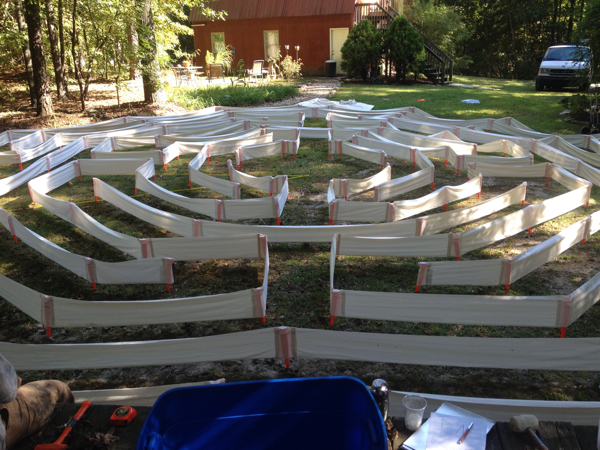 Yes, all the walls are done, and yesterday I went out to Craig’s to lay it out.  I approached the task with some trepidation, because if my math science was wrong, then I was well and truly screwed—Alchemy is in two weeks, and I don’t have the funds to start over anyway.

I knew there would be irregularities in the layout; that’s just the nature of fabric and wobbly stakes, plus I’m not at all sure that the original layout rope triangle is entirely accurate.  And there was the matter of the eight short walls missing that critical two inches to accommodate the pleats…

On the whole, though, it worked well, and well enough.

As planned, the new look makes the labyrinth look more important, especially in that it now looks like what it is, i.e., a labyrinth.  It’s clear now that this is something you enter.  So that part of the idea is a complete success.

In this quasi-aerial shot, you can see the floppiness in some of the walls.  Somehow I added too many two-inch accommodations to those walls, but all I have to do is twist the center pocket once and stitch it down, thus taking up the slack.  We’re also adding some central pockets to some long walls that are not holding themselves up.

In the foreground of that shot you can see the octagonal mat upon which we will place the tripod and the bowl of kaolin.  No MOOP here, folks!

I rolled out one of the long walls to begin marking the pockets that needed taking up: 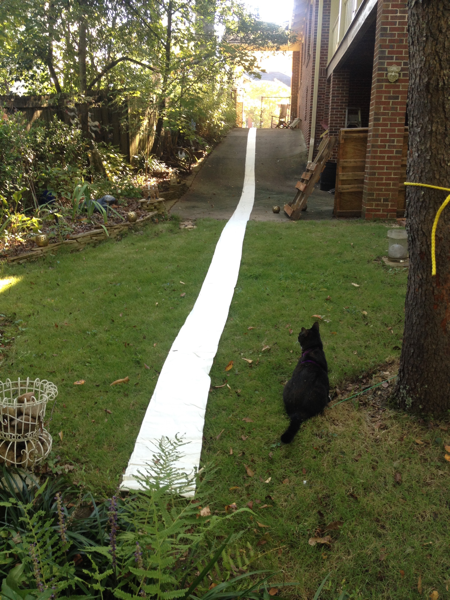 Oi.  It reaches all the way up to the middle of the carport.  It was probably better that I didn’t realize this.