Camping with the Hippies™ is great fun, but there are challenges.  At Alchemy last October, I had borrowed my son’s tent, a perfectly cromulent “3-person” dome tent.  (N.B.: the number of persons a tent can hold is calculated by wrapping campers in sleeping bags and stacking them like cordwood.)

Since I had covered it with a huge tarp, first for rain protection and then for added insulation against the cold, getting in and out of it involved crawling through the entrance like Eskimos into an igloo.

And then inside, all our stuff was just strewn on the floor between the air mattress and the walls, and all the other stuff was stuffed into the plastic tubs outside, also covered with the tarp.

I had borrowed the tent because I (meaning one of us in the relationship) wanted to make sure that Camping with the Hippies™ was something we were going to want to do more than the one time.  As we all know, it is definitely something we (meaning me) want to do on a regular basis.

Since then, I’ve been researching and browsing and shopping for a permanent tent solution, and this weekend I made my move.  If you do your due diligence, you know that January is a great time to buy tents, because who in their right mind is going to go camping in the dead of winter (Frostburn notwithstanding)?  And lo! Academy Sports+Outdoors had some of their tents on clearance.

Here were my criteria: it had to be a cabin-style tent, i.e., tall enough for humans to walk through the entrance and stand up in.  It had to be large enough to sleep the two of us plus store all the tubs of stuff plus give us room to organize the stuff, change clothes, etc.

And so, behold the Coleman Instant Tent 10! 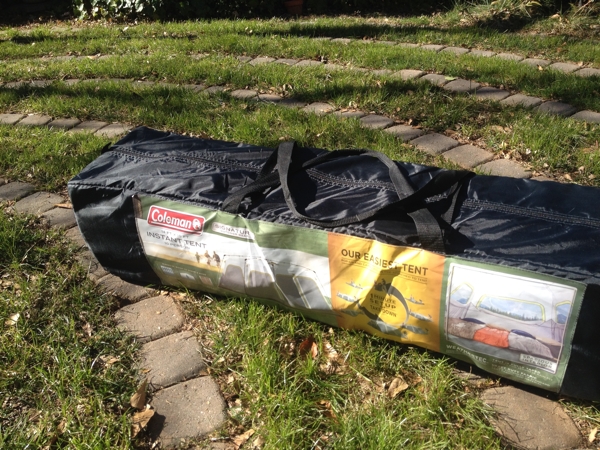 Yes, I bought a tent big enough to sleep ten people for the two of us.  Notice the trimly rectangular carrying case.  Hold that thought.

Out of its trimly rectangular carrying case: 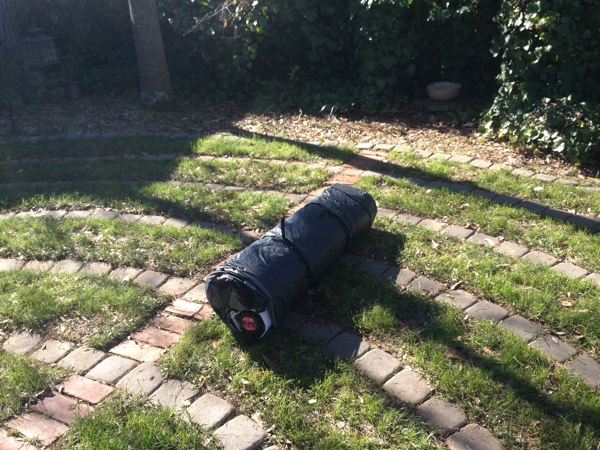 The deal with Coleman’s Instant Tent series is that the tentpoles are permanently attached and hinged, reminiscent of an umbrella in their construction.  The trimly rectangular carrying case promises a 60-second setup, although it cautions that the “first time” may take longer.  Indeed, I can imagine some kind of Tent Olympics where a smoothly rehearsed team could get this thing erect in 60 seconds, but even if you accomplish that feat you still have to adjust the legs and the floor, and stake the thing out.

Fortunately, Camping with the Hippies™ is not a race, so who cares how long the thing takes to set up if a) it’s easy; and b) the results are good. 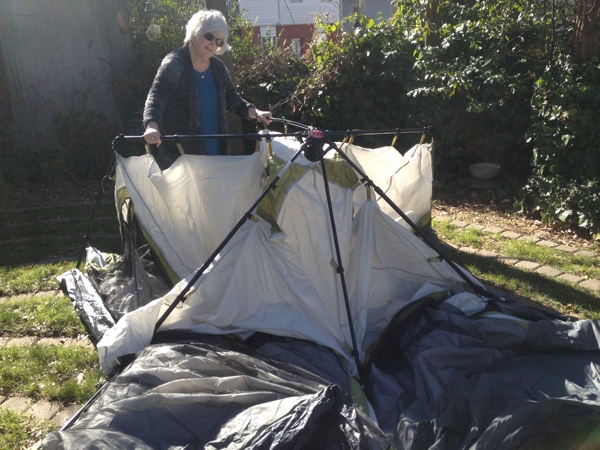 We begin the setup process. 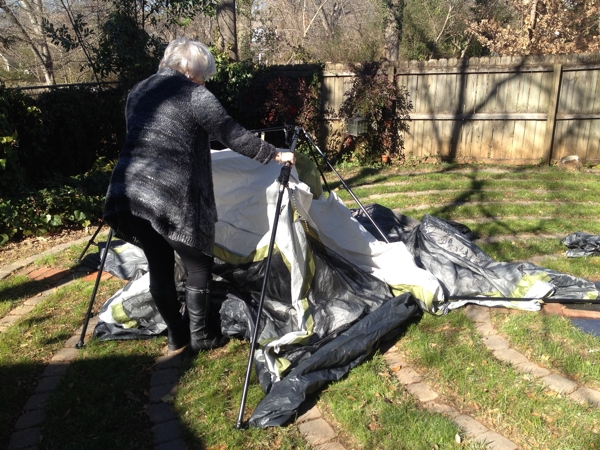 Lots of pulling and tugging and figuring out the realities of the minimal instructions.  Trying to figure out which side is the long side so that we can fit it onto the far side of the labyrinth. 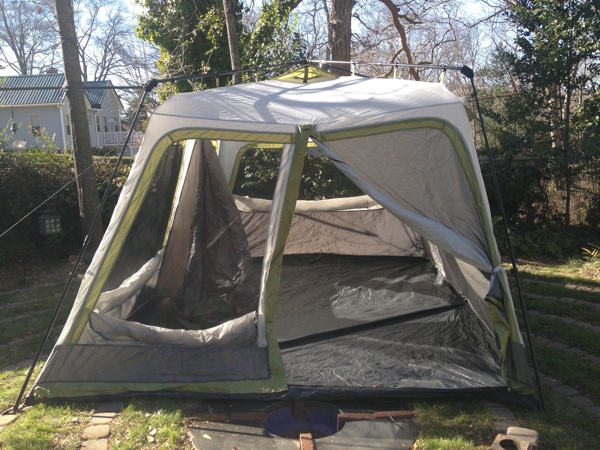 A little lopsided, but it’s up, it’s staked, and all parts are accounted for.  Notice the dangling flap thing inside.  This is an actual room divider, for which some of our party had devoutly wished because of privacy who even knows.  It’s not mentioned on the trimly rectangular carrying case, and so it was a pleasant surprise.

Of course, “privacy” has little meaning in a setting where the showers are neither private nor segregated, and half the hippies you see are unclothed to some extent.  But hey, we can put up a wall if we want to. 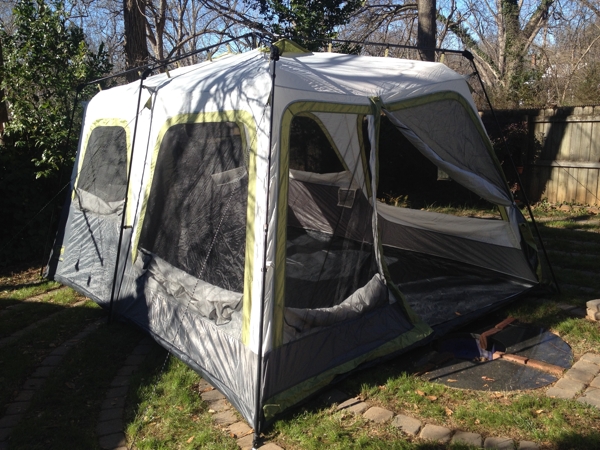 And here we have the happy tent owner, standing in his new domicile. 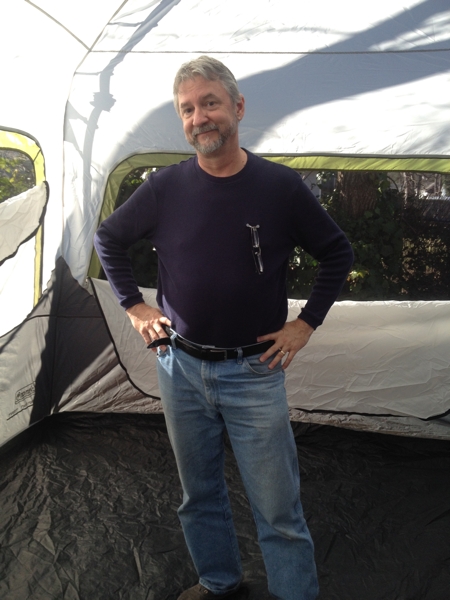 What goes up must come down, and this is where we need to return to our trimly rectangular carrying case.  Of course nothing ever folds up as neatly as it was originally packaged—how those third-world workers do it, I’ll never know—and the Instant Tent 10 is no exception.

We collapsed it, rolled it up, rolled it over the ground as suggested in the instructions to smoosh air out of it and get it back down to a reasonably sized bundle.  But it would not go back into the trimly rectangular carrying case.  We took it out and tried again, but it was impossible.

We tried standing the carrying case up and pushing the tent down into it, thinking that might give us a good start on stuffing it in there.  And that’s when I noticed that the label on the bottom of the case had a large arrow on it.

Aha, I thought, instructions on which end should be up!  I leaned closer to read: “Tear the label off between the seams to expand.”

I ripped the label off, the bottom of the trimly rectangular carrying case breathed a sigh of relief, and it accordioned out into a nice middle-aged carrying case into which the Instant Tent 10 slid with no problem whatsoever.

So now we’re ready to go Camping with the Hippies™ in style.  We’re already looking at oriental carpets to lay down on the floor for that extra fillip of éclat and comfort.  I’ll keep you posted.