Shortly after coming up with the idea for 3 Old Men, I had lunch with my partner in crime, Craig.

He immediately suggested that we include a labyrinth as part of our ritual offering.

Well, OK.  I’m all about the labyrinths, of course.  But the issue is still cost and transport: what do you build it out of, and how do you get it there and back?

Craig talked about an experience he had in a psychology class, a “final exam” consisting of rituals, including a “birth tunnel,” from the participants would emerge into an altar area and then encounter different experiences past that.

So, perhaps a multi-cursal labyrinth?

This is from a 1557 publication, Devises heroïques, by one Claude Paradin.  It has four entrances, but I thought it was odd that the East/West entrances don’t actually lead to the center: they go up to the wall of the center, but then you just turn around and go back out the way you came.

So I punched holes in the walls: 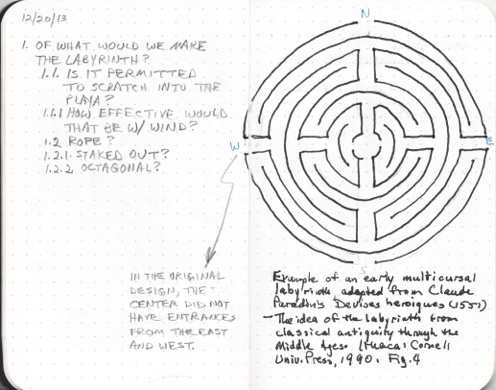 So now the 3 Old Men, rather than trekking across Black Rock City and its surrounding Playa, make their trek around a labyrinth, stopping at the entrances.

Now we have three officiants who take up their posts outside the entrances to the labyrinth.

Going with Craig’s memory of emerging from a ritual to encounter a variety of experiences, I came up with the idea that each officiant would offer a different encounter, an agon if you will, to the celebrant emerging at his exit.

The nature of these blessings and struggles are undefined for the moment.

At the same time, a new image entered the mix:

Now the 3 Old Men are wearing long, draped skirts.  They seem to have lost the hazmat mask, but they are still bare-chested and painted white, and they still carry staves.  (The parenthetical reference is to a costume design I did for Pericles, Prince of Tyre at the Newnan Community Theatre Company in 1987.)

Who knows where the skirt idea came from?  I like it, though: the skirts would emphasize the effort of moving forward.  It’s otherworldly enough to pique the interest of your average Burner, and would actually photograph better than the loincloth idea.  It also makes us look more like officiants and less like ascetics.  Those guys are no fun.