In which a Woman fulfills her Dream of Driving across this Great Land of Ours, accompanied by her Husband, who Hates to Drive

But there was always something to see out of my window. No matter when I looked out over this continent, there were always lights out there somewhere.

I noticed this last year when the Lichtenbergians flew out here for our Annual Retreat. That flight was during the day, and the landscapes were stunning, phantasmagorical—but they were almost never without the footprint of humans. Roads, power lines, hiking trails, small tracks carved into the hills, all proclaimed the presence of humans.

And last night, even in the pitch black of a transcontinental night flight, we were there. It might be only a couple of specks, widely separated, but our presence was unmistakable and inescapable.

When we finally began our descent into SFO, then, the display was dazzling: huge quilts of light, spiderwebbed across the entire landscape, and in constant motion. It was sobering.

It’s morning now, and we’re slowly moving out of the door.  I have photos of our hotel, the Stanyan Park Hotel, but I have to wait until I download iPhoto for the iPad so I can rename photos before uploading them.  I don’t have to; I could simply let WordPress upload them for me, but then they disappear into WordPress’s filing system.

Incredible day, folks.  We started out by driving to Fisherman’s Wharf, via Lombard Street.    I had driven down it last fall with the Lichtenbergians, but my lovely first wife was completely unprepared for the exhilaration of twisting our way down those hairpin curves.  What neither of us can get over is that people live on that street.  Is it more expensive or less to live in the most photographed place in the city?

I noted that, like last year, I was the only one driving down it.  One’s paranoia kicks in: is it bad form to do so and everyone but me understands this? 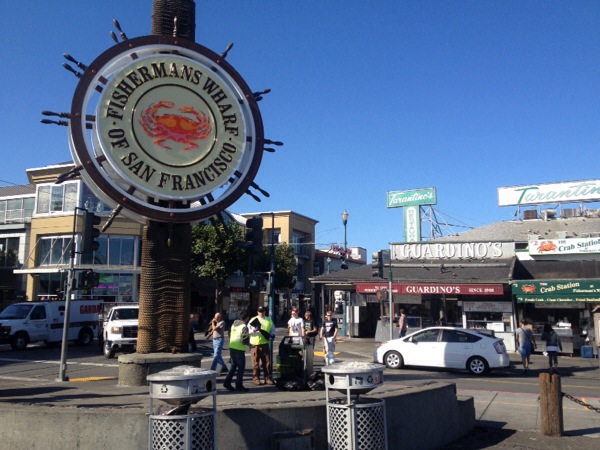 And so we get to Fisherman’s Wharf.  It is amazingly touristy, of course, so we plunged right in.

One must-see is the Musée Mechanique, a fabulous collection of old coin-operated automatons: fortune tellers, dancing minstrels, scenes from farms and fairs, and an amazing number of executions.  There are also a number of old peep-show “movies” which were very tempting, although only one of us succumbed to their allure.

Here is the lovely first wife sitting in a device called The Passion Factor.  (Hush Jobie.)  The glow behind her head is the light of the heart labeled “Uncontrollable.” 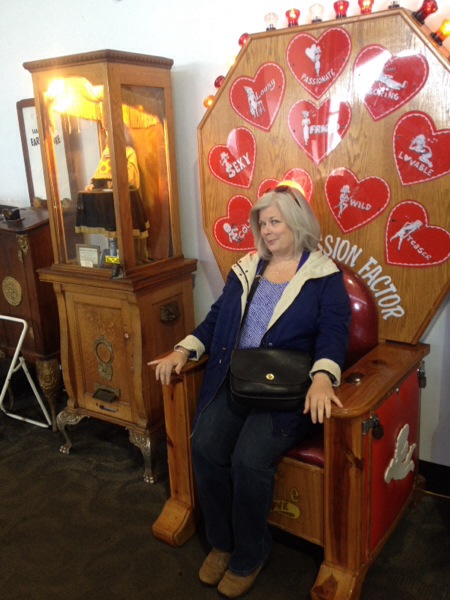 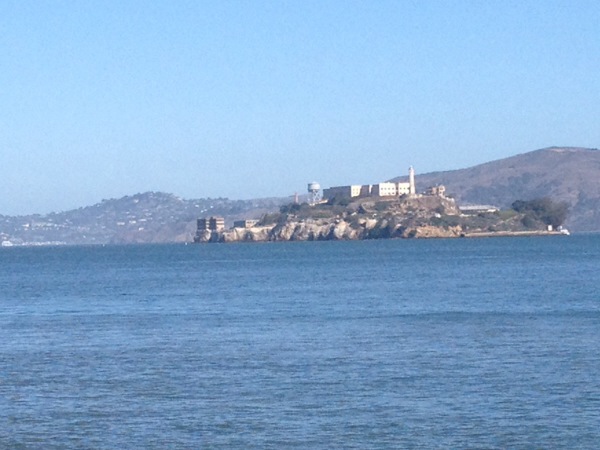 Since this was a spur-of-the-moment trip, we were unable to get tickets to go out, but I think next time we must do this.  Do they let you walk naked down the block, I wonder?

We moved on, as good tourists do, to Pier 39, where one of us fell in love with the sea lions. 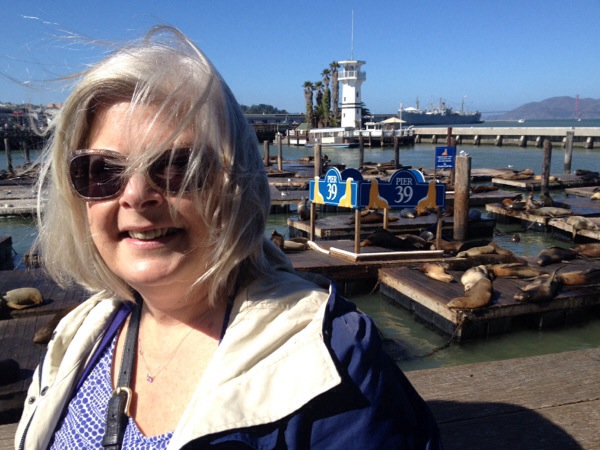 I think we would have stood looking at these animals all day.  They were incredibly amusing: basking, lolling, flopping, barking, chest-bumping.

http://http://dalelyles.com/crosscountry/cc2_wharf6.mov (I don’t know why this isn’t embedding.  Click it anyway.)

Eventually we tore ourselves away and spent some money as we were required to do.  It is interesting that both of us seem to have reached a point in our lives where the lure of more stuff is simply not there. The fact that most of the stuff being offered was not gorgeous also helped.

But then we entered the Spice & Tea store.  Oh my.  Salts, teas, spices, sugars, and accoutrements.  I spent lavishly, including a bamboo salt cellar with four compartments.  Also, salts to go in them.  And sugars, mostly to rim cocktails, naturally.

Lunched at Fog Harbor.  Good food, but the cocktail list was unadventurous and the bar didn’t look well-stocked.  I stuck to wine.

Outside our window, the U.S. and New Zealand were preparing for the next two heats of the America’s Cup race.  The U.S. yacht was being skippered by the CEO of Oracle, who clearly decided that since he was going to be in town, his company needed to have their international get-together the week following.  Which is why we found it so difficult to find a place to stay in San Francisco: 30,000 geeks have clogged up the place.

Everyone said, “You’ve got to go to Muir Woods!”  Literally everyone who had been to San Francisco said that.  It’s about an hour north of the city, and since it would take us over the Golden  Gate Bridge, we began to plan getting there.

You would think in a city swarming with National Recreation Areas, most of which are named Golden Gate, it would be easy to get a National Parks annual pass.  You would be wrong.

The store at Pier 39 had closed.  We spent the better part of an hour driving around the Presidio—impressive, so not time wasted—trying to find the office there, only to discover that it was open Thu-Sat only.  Feh.

Finally I checked the list online, and it seemed that Muir Woods itself could sell us the pass.  So off we went.

Here’s the deal: if you are ever in San Francisco, YOU HAVE TO GO TO MUIR WOODS.  Forget the trolley cars.  GO TO THE WOOD! 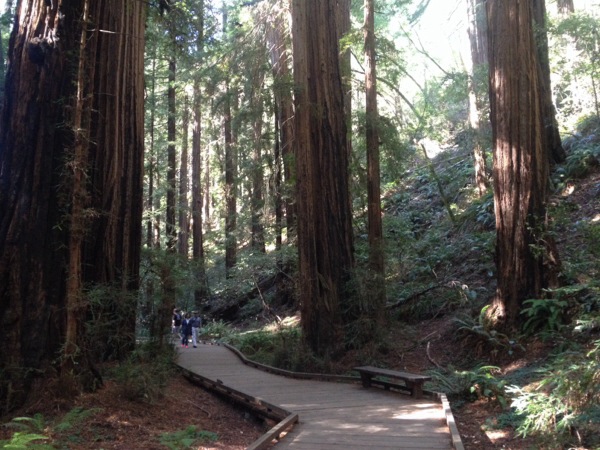 It is one of the most beautiful places I have ever been.  Even the usually empirical lovely first wife was overcome by spirituality.

There were Others there.

Go to the wood.

On the way back, we stopped at the Golden Gate National Recreation Area so we could go watch the setting sun light up that beautiful bridge.  That was our second mistake.

Our first mistake was not packing a USB cable to charge the phones with.  Mine died as we approached the bridge.  The lovely first wife’s phone was at 20%.

So when—as we set out past the old fortifications on our way to the top of the headlands—we were stopped by a vaguely Scandinavian gentlemen who asked us to assist a Chinese couple who had locked their keys in their rental car, we were limited in our abilities.

Oh, and they spoke no English.  The Scandinavian disappeared, leaving us trying to figure out how to do this.  We called 911, but they don’t do that, of course.

We called Avis and got through to their roadside assistance, but since I was not the renter, they found it difficult to respond.  Finally they offered to get a translator on the line if I could hold, but of course I couldn’t.

The Chinese couple had a phone, but it kept dropping calls.

I finally called my AAA and explained the situation (after I was transferred from our own Club South to someone closer to the situation).  They could send someone to unlock the car, but it would take 45 minutes, and we would have to be there to accept the help.  I explained that in 45 minutes, we would not have a phone for them to contact us through.

But there we were.  I drew little pictures to indicate that help was on the way, and we gestured that we would go ahead and walk up to the view while we waited.

Up we went, and when I saw a quartet of Chinese college students, I hailed them.  Did they speak English?  Yes.  Did they speak Chinese?  Yes.  I explained the situation to them and asked if they would see if they could help the couple at the bottom of the hill.  Sure…

It took only 15 minutes, and after clearing up some confusion with the roadside guy (Calvin, also of Chinese extraction though not a speaker) about where we were—no one to whom I spoke seemed to know there was a park/overlook on top of the headlands on the north side of the bridge—he arrived in his bright yellow truck and unlocked the hapless couple’s car.

Hotel, dinner at Cha Cha Cha, right around the corner on Haight Street, and yes, some hippie kid offered me drugs (I think: his exact words were, “Are you looking for something?”  I think he was having the straight people on; I wish I had turned and said, “Yeah, how about two eighths of shrooms?” just to see his face.)

Great tapas, and then further down Haight to Alembic, a noted bar whose stock was awe-inspiring.  Bottles I didn’t even recognize, you guys!  I had their Mexican Radio: tequila, pineapple gum syrup, lime and their special combination of sherry, kahlua, and Fernet Branca.  Tasty, but not one I’ll add to my list.  I followed that with a Sazerac, and that was awesome.

The lovely first wife, who had been nursing a simple bourbon, decided we’d close out by sharing a Cinnamon Twist, a yummy little dessert drink that is nonetheless a sorority girl drink.  So I pretended to be embarrassed in ordering it.  Then I pretended not to be embarrassed when our bartender said he couldn’t make it because he didn’t have a single ingredient.

That’s how cool this bar was: it did not have on its shelves butterscotch schnapps, Goldschläger, or Bailey’s Irish Cream.  Mercy.