We interrupt the muggings to bring you an update on the labyrinth.

My lovely first wife had been bugging me about what I wanted “to do” for my birthday, i.e., what exotic, extravagant trip would I like to take?  NYC, which is always good?  A quiet beach somewhere?  I found that whatever I considered, I didn’t really want/need it.

I finally realized that what I wanted to do was to stay home and work in my labyrinth. So I took Thursday and Friday off with definite plans.  I was going to a) build the permanent fire pit; b) create the stone circle for the westpoint; and c) install a sound system.

I wish I could relate a tale of hard work and satisfaction, a rebuilding of my soul and all that good stuff.  Alas, it didn’t quite turn out that way.  My spirit is not crushed and I am not defeated, but the whole thing is a bit of a shambles.

First, muscles in my lower back spasmed last weekend while I was moving firewood.  So there went the permanent fire pit, with its lifting of some four dozen heavy landscaping stones multiple times.  (It also means there’s still half a pile of firewood in the driveway.)

The stone circle was smoother on its path to failure.  For background, see here.  Simple idea, and not too terribly difficult in execution.  I set up my drill press on the work table: 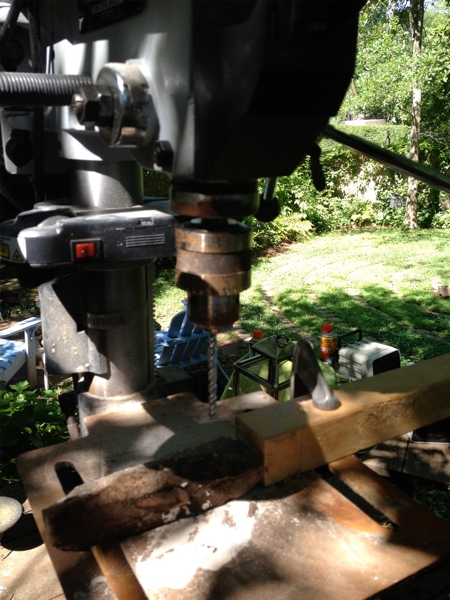 I had measured where I wanted to drill the hole, and you can see my cleverly arranged piece of wood which gave me a uniform block against which to put the outer edge.  Drilling the pieces took very little time and was a pleasure.

I threaded each piece onto a cable: 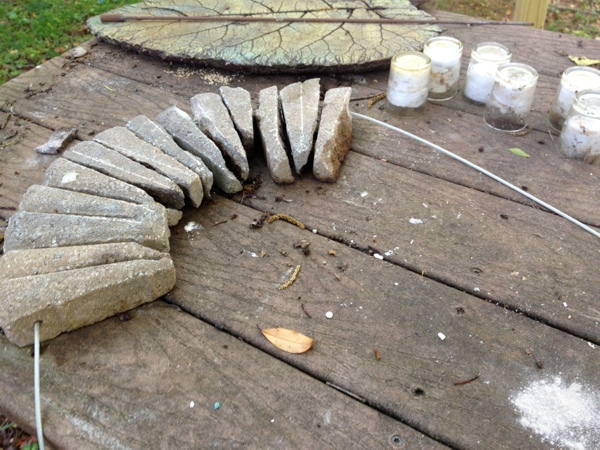 Simple, simple, simple.  The big issue was the base pieces, but even that was simple: drill a hole for the cable to go through, and then from the bottom drill a larger hole for the rebar or whatever I was going to stick the thing on, and the smaller hole intersected the larger one.  Worked like a charm. 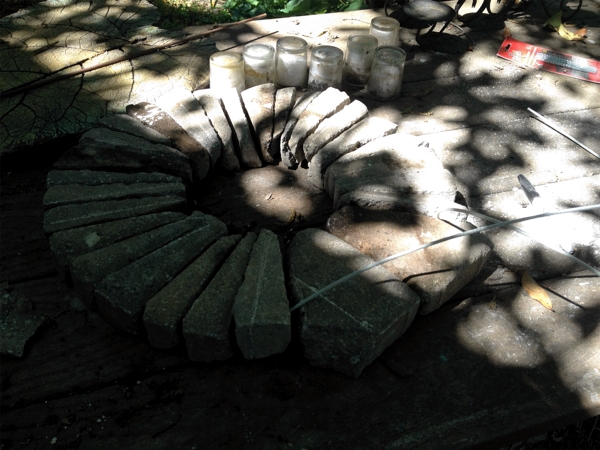 Lovely.  Perfect.  Except it didn’t work.

The theory was that like an arch the stones would be self-compressing; the cable was there to keep them in line.  However, the stones were too uneven to function like a classical arch, and the whole thing just flopped over when I tried to stand it up.  Not enough rigidity, and I’ll hear none of that from the likes of you, thank you.

So the westpoint once again lies dormant while I figure out the next step.

That was Thursday.  Friday, I tackled the sound system.  The goal was to install speakers that would a) be weather-resistant, i.e., I could leave them outside permanently; and b) spread the sound more evenly across the space.  For instance, when walking the labyrinth it was often hard to hear quiet music from the front of the labyrinth while rounding the far curves.

After much internet search, I found speakers that were in-ground and seemed to be just the thing.  No, I didn’t want the fake rock ones, or worse, squirrels or flower pots.  I ordered two, one for the northwest corner (by the dancing faun), and one for the front entrance.

I trenched in the cable (I now have 400 additional feet of bury-able speaker cable…) but left the speakers not buried so I can make final adjustments for the best sound.

The amp I ordered came in right after lunch, and I won’t bore you with the scrambling I had to do to get the bare speaker cables hooked up to the RCA inputs on the amp.  Short version: it seems to work and to work well.  I think the sound quality is not quite as good as the Califone portable boombox system I had been using—not enough highs or separation—but for basking in the labyrinth or hard sessions of meditative work, it should be fine.

The only glitch in my plan at the moment is that I awoke to rain, which puts the completion of the system on hold.  It also means that I won’t be able to be out in the labyrinth tonight to celebrate my birthday.