Yesterday I planted new ferns around the labyrinth. I’m running out of places to put them, unless I rip out the ivy altogether. If I could rip out all the big ivy and leave the English ivy, I might consider it.

Anyway, I’ve loaded in so many varieties that, dilettante that I am, I can not remember which one is which. I have a great book, Ferns for American gardens, by John T. Mickel, in which I have annotated which species I’ve planted and where, but sometimes when one is meandering about the space, one just wants to know, you know?

The obvious solution is a marker of some kind. After a little thought, I imagined that a pretty solution would be to make some in the ceramics lab this summer, small clay tablets with the names stamped in, then lash them to sticks with something funky. In the meantime, I thought, I could just run get some of those cheapo metal ones that you write on.

Then my lovely first wife reminded me of the neat idea we saw in a shop in Colquitt, GA. 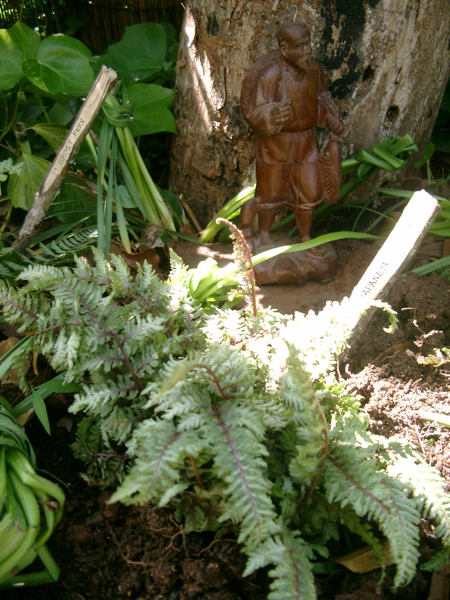 Kind of hard to see, but the idea should be plain: take a stick, whittle off a flat white space, and write the name on it. I felt all folksy doing it. At least until I used a Sharpie™ to write the names. But now they’re all labeled. An added nice thing is that the sticks are all from the fallen Dead Tree.

I may still make some in clay this summer. Heaven knows I shall probably need the therapy.