We were Decoratoring™ the domicile last month, and as I unpacked the ornaments for the front tree—yes, we have multiple trees—this little ornament surfaced: 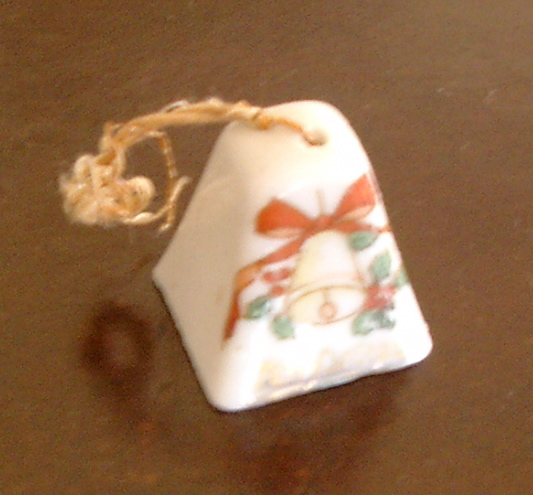 Here’s the story. I was in first grade, in Miss Betty Jim Owings’ room, and it was the day before Christmas holidays. She asked us all to put our heads down on our desks and to keep them down until she told us to look. I could hear her moving about the room, and I must have felt something being placed on my desk, although I do not remember that specifically.

What I do remember is the sound, the tinkling that moved about the room with Miss Owings. I think she said something about fairies. When we finally looked up, each of us had one of those red mesh stockings filled with various goodies, and attached to the top of each one was a little china bell.

Do you know how hard it is to make myself believe that?

I took the little china bell home, and I put it away in a little cedar box that had been my mother’s but which she had given to me. Lots of flotsam in that box, and I can still see some of it in my mind: a cheap little horseshoe magnet, a piece of galena, some chalk, a stub of sealing wax. In this ark the china bell made its journey through the years, until finally I was married and beginning to decorate Christmas trees on my own. At some point I remembered the bell and brought it out, hanging it on the tree near the top.

Now it’s stored away during the year, and I remember Betty Jim Owings every Christmas when I take it out.

Betty Jim Owings was my first teacher, kindergarten being a rarity in those days, at least for those who grew up on dirt roads on the east side of Macon, GA. We had moved to Newnan that summer, and I entered Elm Street School in September. Miss Betty Jim was the first person outside my family to have a profound impact on me.

In those days, we learned to read via the execrable Dick & Jane series, and we did so by going up for Reading Circle. Six or eight children would come up and sit in the reading circle with Miss Owings, and we’d read round robin. (The point of the D&J series was “sight word” instruction, and no, I don’t know what everyone else was doing. Worksheets I assume.)

The first time I went to the reading circle I did not listen carefully to our instructions, so when she said, “Read the first three pages to yourself,” I didn’t realize she meant to read silently, and so I just lit out, flipping the pages as I read out loud. To myself, to be sure, but out loud. “Oh. Oh oh. See. See Spot…”

“Read silently, Dale,” Miss Owings admonished, but when Reading Circle was over, she pulled me aside. “You already know how to read,” she observed, and proceeded to test my reading level on the spot. I read at the fifth grade level, and so she provided fourth and fifth grade readers for me to read. I never returned to Reading Circle and its little wooden chairs.

So Miss Betty Jim jumpstarted my brilliant career, never holding me back to the level of the average first grader. Once, however, that was a problem. Does anyone remember the flannel board? This was a simple piece of cardboard, about poster size, covered with dark green flannel, accompanied by a box filled with dozens of cutouts of letters, shapes, and animals. Miss Owings would use it for various purposes, but mostly for math. She would put up the numeral ‘4,’ for example, and invite someone up to put the right number of pigs or cats on the board. Or she’d put up a simple math sentence,  ‘2 + 3 =,’ and some lucky child would get to define that in pigs.

That was marvelous: the six-year-old in me lusted after that box with its scores of items, all neatly categorized in their little compartments. But I never got called on. I’d raise my hand, but Miss Owings would always call on someone else. Finally I expressed my sadness to my mother, who to her credit called Betty Jim and told her. And Miss Owings, to her credit, apologized to me. She didn’t call on me because I already knew all of it, she said; I told her that I still wanted to “do flannel board” like everyone else. And so she began to call on me as well as the others. And I got a flannel board for Christmas. (I still use that story as a cautionary tale for parents of gifted kids: never forget that while they read like someone four or five years older, they’re still a kid and want to do kid things.)

Twenty-eight years later, my son Grayson was born, and Miss Betty Jim (as she was now known to me) came to our house bearing a gift: a small wooden chair. It was one of the original Reading Circle chairs, she said, and when the school system bought new, cheap, plastic chairs, she simply took all the wooden ones home with her. She stripped the paint from them and held on to them, doling them out as presents for special people and special occasions. I was one of those special people, she said, and this was a special occasion.

Betty Jim Owings died nine years ago tomorrow, January 13, 2002, having remained one of my biggest supporters for the rest of her life, attending every play at NCTC and cheering my every achievement. She was a great lady. Thank you, Miss Owings.

4 thoughts on “A Christmas memory”