I said yesterday I would write in more detail about my complicated relationship with the journal-effort that I’m calling A Perfect Life. It’s complicated.

First of all, a reminder of the physical object I’m talking about: 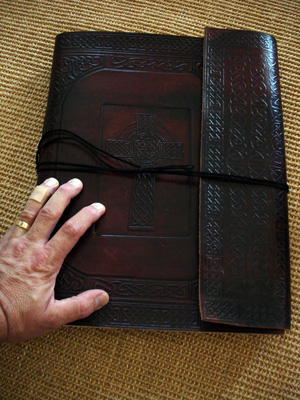 It’s a beautiful thing, a leather-bound journal with probably 120 pages or so of nice paper. I bought it at the Renaissance Festival two years ago with the intent of using it for something literary.

Eventually my intent coalesced around an idea that’s bugged me since childhood. When I was a kid, I had a burning curiosity to know how people lived in the past—not just “they lit candles instead of turning on lights,” but “What kind of underwear did they wear?” “How did they cook a meal?” “What did they do to be liked by each other?”

So I began to think about writing a nonfiction piece that would detail what it was like to live my life, i.e., an upper middle class white male of the late 20th/early 21st century American small town culture. To be sure, I am atypical. I won’t be writing about playing golf or dinners at the club or bedding the neighbor’s wife. There will be a lot more about gourmet cooking and music and architecture and the underpinnings of our social structure and examinations of my privilege.

Why didn’t I get started on this project this summer? Why didn’t I open the damned thing the day after I bought it and start scribbling in it? It’s not as if it’s the Red Book of Westmarch, although that’s exactly what it’s going to be, only without, you know, heroic quests and the passing of ages.

And I’d hold off judgment on the “passing of ages” thing as well. I’m not sure but that the world as a whole and the U.S. in particular is entering a new, more painful stage. It may be that the life I’ve lived will never be possible again, and it would be interesting to have a simple account of that life.

So why didn’t I start this project this summer? I know exactly why: the blank page. What is the first thing I need to write in this book? It is not my intention to create a “finished” book, i.e., that when I’m done all a publisher would have to do is photocopy it. I mean for it to be fragmentary, first-draft, exploratory. But where do I start?

Perhaps the answer lies in the Red Book: “In a hole in the ground, there lived a Hobbit.”

2 thoughts on “The perfect life”