I got nothing done. It was a rough day, and you’ll pardon me for not going into details here on the World Wide Web, and the only thing I could manage was the anodyne of surfing the web. There are those of you who might have noticed the strong uptick of forwarded URLS.

We traveled to Valdosta last Thursday to visit GHP. We saw Mike Funt’s theatre students perform two “silent movies” and a “Bat,” i.e., an in-the-dark improvised radio play. And it was good, of course. The slapstick movie was quite charming, and the table chase sequence was primo.

We also stayed to participate in the annual Hogwarts Event. We had more than 24 people take part this year, including a house elf: Tom Fulton, math, had his whole family dressed as the Malfoys, including his two-year-old son. The students, as usual, went nuts.

An interesting event: the two RAs portraying Harry and Draco are engaged (I know, the slashfic writes itself), and as I was passing through the lobby they were working on their wands. (We build our own wands.) They asked if I had a moment, and I sat. They wanted to know if I would officiate at their wedding next June. I was quite touched and immediately agreed. Details to follow.

And yes, I am as confused as you are as to how this works, since the state of Georgia does not recognize such a marriage. But it was a good part of the weekend. 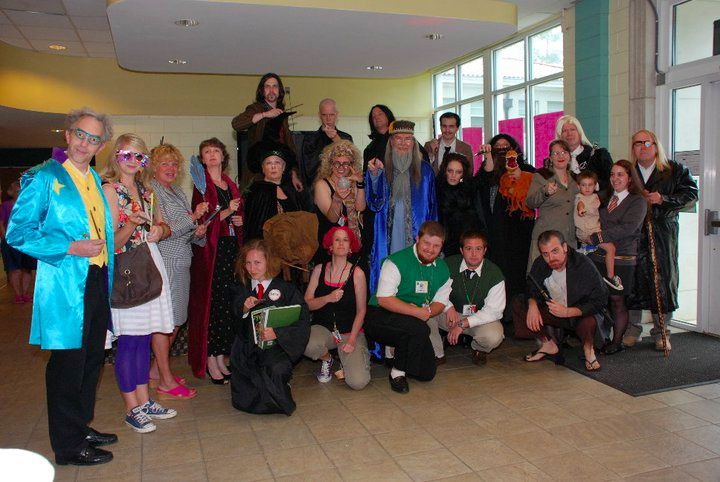 We were still missing Harry, Draco, Cho, and Cedric at this point. They still had desk duty.