I’m off to a) sketch my brains out, and b) do a little work on the labyrinth.

Some of it’s just easy stuff: planting the ferns over at the little earth dam, and moving the planter lights on the wall from just behind the north point to a more symmetrical position further east. Craig noticed that the other night, that now everything is in place, the very first lighting fixture I put up should be somewhere else. Also, a thank you is in order to Dawn and Terry: I had found a nice little hurricane lamp thing on a stand out at Target, and I thought two would be nice. Target had only one, and the intertubes said Carrollton had one. I emailed Dawn, and they brought it down last Monday. Terry claims it’s his Lichtenbergian Assignment L.08.9; I’m willing to accept that.

But there is one hard thing: 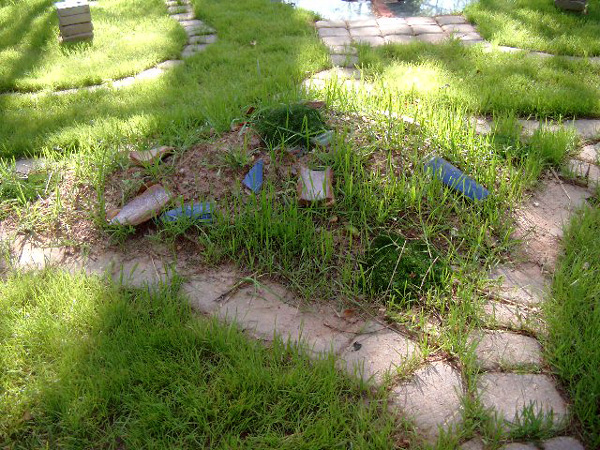 ::sigh:: The mound in the conjunction of the paths. The little vesica piscis-like left-over shape. What to do? On Friday night, the general consensus was that I should get rid of it, i.e., flatten it out. As it stands, it kind of dominates the landscape. The whole thing would be prettier if it were flat.

In its defense, I meant for it to be an interruption, a barrier. When you stand at the entrance, it blocks your path to the center (even if the Path were not buried and inaccessible), a Holy Mountain, perhaps? There are reasons to leave it in place and just coax the Irish moss along to cover it quickly. Indeed, part of its problem is that it’s so ugly. I’ll try weeding the grass out first. The bits of pottery were for visual interest, but without heaping mounds of moss, they just look trashy.

At any rate, I won’t get to that until later this afternoon. If you have any interest in saving it, leave a comment. Or come by and throw your body athwart its holy summit. 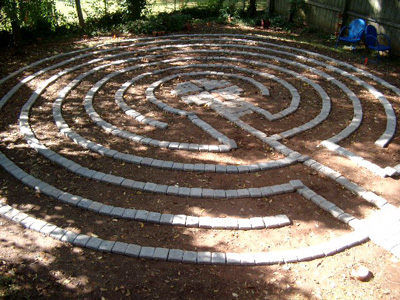 Of course, if I had stayed with the old geometric style layout, I wouldn’t have this problem. There is still something very strong about this version that appeals to me. Alternate universes are a bitch, aren’t they?