The chimes have just struck noon, and the carillon has played its selection of Lenten hymntunes. I am back in the labyrinth, soaking up the sunshine. 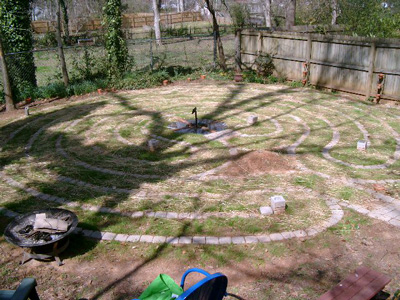 My intent is simply to relax. There’s nothing pressing on my agenda, no deadlines, no concerts, no Literacy Task Forces. So I’ll read, and do crossword puzzles, and probably nap.

I could work on the yard, but I think I will put all of that off till another sunny day.

What’s still left to do? Oh, plenty. Now I have lots of areas that need grass or moss or something covering the ground. The mound in the center needs a ground cover, since the bluestar stuff I planted earlier died, despite being featured prominently in the new Southern Living as having been used in a lovely Buckhead garden by one William Tingle Smith, of whom I could tell you some charming tales from our Period Dance days. 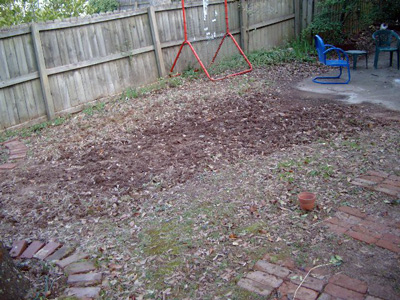 There’s the putative dance floor, which as you can see I have tilled but not yet leveled or shaped. This requires a lot of thinking and looking and probably drinking.

There’s multiple plantings of various ferns, but I really want to wait until it’s warmer before attempting all of that.

I have cut and sanded, but not stained, new armrests for the old glider. Also, I need to find nuts and bolts to attach them, which was not an automatically easy thing to accomplish when I went to Home Depot last time to accomplish it.

There is still the drilling of pavers for the little plinths out in the labyrinth. I got one finished, and then cold and rain sidelined that operation. 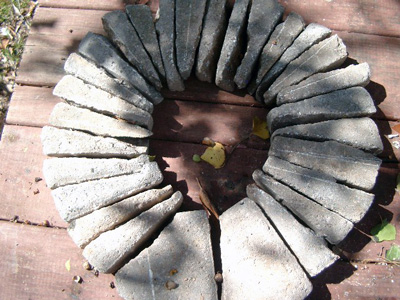 There’s this little deal. These are the leftover bits of pavers after I lopped them for the curves in the labyrinth. My plan is to drill a small hole through them and thread a rod of some kind that will hold them up, then install it as a sculpture somewhere in the complex. It’s an idea stolen directly from Andy Goldsworthy. He, of course, would not be drilling holes or threading rods, but then again he’s an international artist of some integrity. I’m just decorating my garden.

More as it occurs to me.

Later in the afternoon: 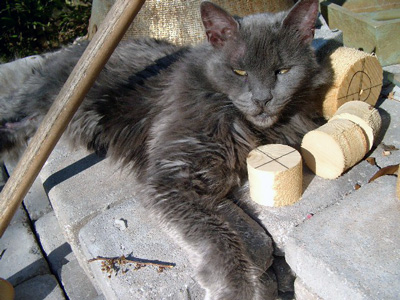