Over the weekend, outside of Greensboro, NC, we came across this: 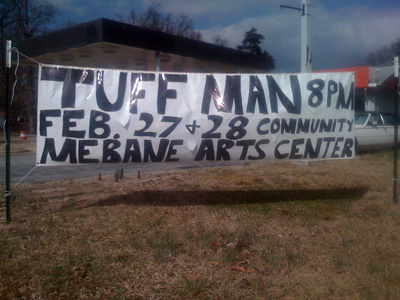 I made Ginny pull over so I could get out and take a picture.

Yes, it’s too easy to make fun of rural-ish ventures such as this. It makes me look boorish, an issue that has arisen in the 341 poem as I try to figure out what I’m trying to say in that particular work of art.

And yes, a Tuff Man contest in the arts center is no more ridiculous than the Miss Georgia Teen pageant that our own Centre hosted several years ago. In fact, I’d say it’s exactly equivalent: the investiture of prescriptive sociosexual norms in a communal glorification.

However, this dichotomy of macho manhood and the arts has raised itself [ed. note: that was for Marc] in our efforts over at Lacuna Group. Four of our five artists involved there are men, and part of the material we’re grappling with is the risks/pleasures/pains of defining ourselves as creatives in a society that does not necessarily see that as congruent with Tuff Man ideals.

So it amused me to see an arena that we probably regard as a haven from such things hosting such things. The worm i’ the’ bud, as it were. And with one more serendipitous link to that charming phrase, I’ll open the floor for discussion.