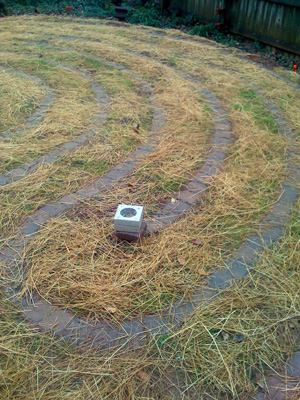 A small shot, but you can see the green beginning to arise beneath the straw.

It actually has gotten greener since yesterday, and by next week I expect to have a good start on the lawn.

Of course, this is probably the winter rye, which sprouts fast and is an annual. The actual grass probably hasn’t even come up yet.

Still, it’s a start, and I think it will go a long way to showing others who remain unconvinced of the whole venture that it will be a quite lovely space indeed. It will in any case be prettier than what was back there before I started, which was this: 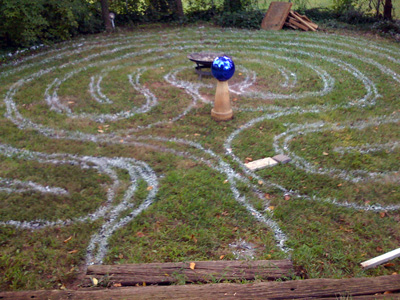 Pretty scuzzy, actually. So in any case, the cool elegance of the labyrinth is a vast improvement.

Here’s a shot of the new landshaping I did the other day: 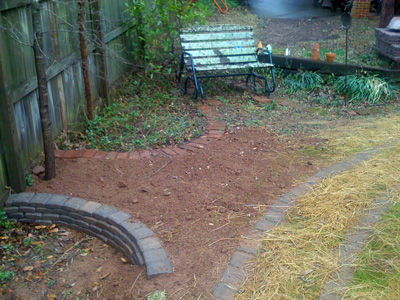 This is where I decided to keep the dirt level in front of the glider at least past the little oak tree.

I used some of the leftover paving stones to create a little earth dam there. It juts into the bank of the northern arc of the labyrinth, but does not touch it. I hauled the remaining dirt from the carport down and filled it in.

In other news, I went researching the availability of ferns today. I found several varieties that will serve admirably in the low sunlight and mostly moist soil in the yard. Now I just have to figure out how best to deploy them. They are not cheap.

Last week I planted a few nandinas down at the back corner. There was already one there, a “volunteer” as a lady of a certain age in Newnan would say, and it dawned on me that they would look good in a clump in that particular spot. For one thing, they would cover up the ugly job someone did, and it wasn’t me, in finishing off the chainlink fence there. For another, they would remind me of my grandmother’s back yard, which had a row of unkillable nandinas along the hogwire fence between her backyard and what used to be ours when I was wee.

I also planted some ground cover, the name of which I do not recall, on the mound in the labyrinth. It does not seem to be doing well, but that might have been because of the cold weather. Perhaps as it warms up it will revive and cover the mound with a lush carpet. It could happen.