On Monday, Labor Day, I went to my back yard and began tidying up, cutting down shrubberies and generally just taking a hard look at it. I used to joke that I landscaped nine square feet a year back there, only that was true, not a joke. But since I’m not here during the summer, the back yard has gone if not to ruin at least to deshabille.

Long ago I had nice brick edgings, a brick step path, several little plantings, and a garden bench. Now, most of the bricks are under dirt or moss, the plantings have been swallowed up by ivy, and I’d be afraid to sit on the bench.

Still, it is the navel, as it were, of the Lichtenbergian world, so I’ve been thinking about actually turning it into a kind of place… you know, a place.

I’m thinking I want a labyrinth back there.

No, not a maze. A labyrinth. A maze is a puzzle, involving choice and angst. A labyrinth is a single path that arrives at the center through many twists and turns, but you cannot get lost.

This is a labyrinth, the most basic kind, the classic 7-circuit labyrinth. It is what I will be building in my back yard. It’s a left-handed one, since you turn left upon entering it.

The lore of the labyrinth is long and compelling. I won’t go into it all here, only to say that for me it is very compelling indeed. I have built one three times (which is different than building three labyrinths), and the tattoo on my leg is of a Spanish paleolithic rock-carving of this very pattern.

The three I built were all at my school. The first one was the result of an article I had read in one of my magazines, about how hospitals were having these built into their gardens and that there was some evidence to suggest that patients who trod the labyrinth, rather than just walked for their exercise, recovered more quickly. This seemed to true especially for patients who were recovering from brain injuries.

At the time (the late 90s), Newnan Crossing served a population that required a great deal of remediation. For one of the intersessions we did, we were year-round at the time, I had a math teacher challenge his students to build one of these. We got a $1,000 grant from somewhere, I taught them how to draw, and Home Depot came to the school to show the kids their options for ground cover, materials for outlining the pattern, etc. Teams had to come up with a design and a proposal for materials. The motive was for them to learn their multiplication facts, but we would also end with a labyrinth in our courtyard, and I figured that if our kids walked on this thing, hey, like the brain injury patients, it couldn’t hurt, might help. 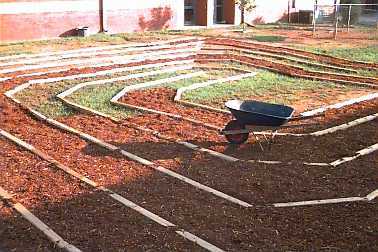 Here it is, after the kids helped get all those fence rails into place and we had most of the mulch spread out. It had wide paths so that many kids could play in it at once, and it had straight sides because it was cheaper and easier (as you’ll see in its next incarnation.)

This was set in between the two wings of the school. I was very clever, since we were going to be under construction starting that summer, to check the floorplans and make sure we wouldn’t be caught up in the debris. I got it finished on the Sunday before I drove to GHP that summer.

Foolish man. That very week, the principal was horrified to walk out one morning to see the bulldozers tearing it up. There was a walkway being built across the courtyard that was not in the plans we’d been given.

I waited a couple of years before trying again. This time, my brother-in-law Daniel designed and built a four-foot-tall concrete sundial, and we designed a labyrinth to go around that on the new playground. 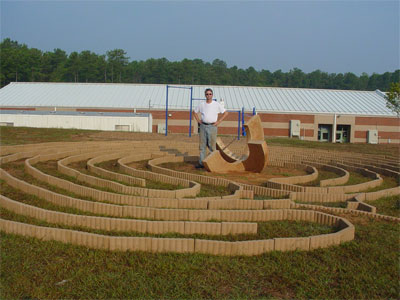 Here it is. We got the lawn edgers laid out, and I was only halfway through getting them in the ground before I was told that the sundial was dangerous and had to come out.

We moved it to the front of the school, where it still stands and where I use it in my lessons about shadows and the sun with kindgarteners.

Then I was told I had to move the labyrinth itself because playground equipment was going to go there. Again, I had checked before putting it up there.

So I moved it all back to the courtyard and tried again. I had a webpage on my site where I listed the times I would be working on it, and that information went home in the school newsletter, but I never had any help on this version. (Three dads were magnificent in getting the sundial up and going.) 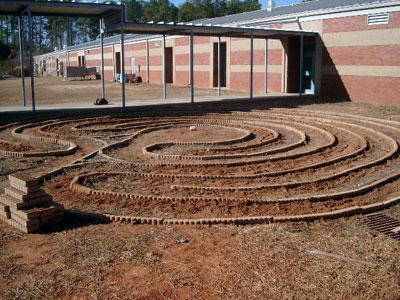 I finally got it done and was waiting for some funding from the PTO for mulch, since I had basically paid for the rest of it myself. Somehow, that was snafu’d as well, and I got home from GHP several summers ago to find it gone. “It was an eyesore and might have been in the way if we had to work on the drains,” it was claimed, even though the butterfly garden on the other end of the courtyard was in total disarray and completely blocked access to the courtyard, and parents came in and put new mulch in the butterfly garden at the same time my labyrinth was being removed. Needless to say, I have not done a great deal of volunteer work for my school since then.

So, it’s been a couple of years since I built one of these, and like the pangs of childbirth, one forgets how much work it is.

This afternoon I laid out my stakes and string and got half of the pattern spray painted onto the ground. I’ll complete the bottom half tomorrow. It was very pleasant: I brought my living room speaker out, plugged my iPhone directly into it, and had Pandora play my New Age station while I worked. I’ve begun placing neat candle holders around the yard, and I lit those as it got dark. Finally, I just lit the fire and imagined the yard as the space I would like for it to be. It’s going to be a haven.

And since I know you’re going to ask, here’s my tattoo: