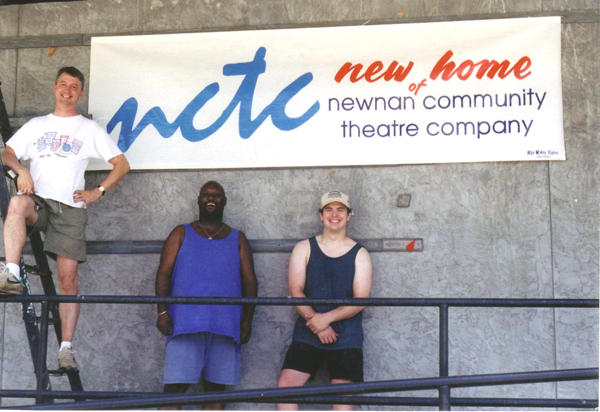 I came across this photo somewhere recently, tucked away in some satchel that I must have used on a more regular basis in a past life. As for most people, a photograph of myself is a lodestone, drawing my eye again and again to this representation of a being that I know must be me, but somehow doesn’t seem right. I set it aside, but it kept resurfacing on my desk, and it kept nagging at me.

Warning: this is all about me.

I like to think that I live in the present, awareness, aliveness, all that kind of zen-state kind of thing. I am not therefore usually given to looking back/nostalgia, but this photo did something to me. Let me see if I can parse it. 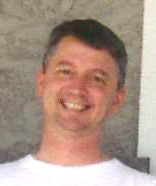 First of all, of course, I was struck at how young, how thin, how happy I looked. (Turff and Matthew probably have similar reactions.) This was the summer/fall of 1999, so I was 45. Beginning to gray around the temples, but still mostly dark-haired, and the short haircut makes me look younger too, I think. (Since beginning to write this, I have had my hair cut short.)

And of course I’m about twenty or thirty pounds lighter. As someone who had always been underweight in my youth, the idea that I might weigh close to 200 pounds someday was laughable. And as an underweight person, I have had no real way to manage my weight until recently. I think that’s the biggest shock for me in looking at this photo. More on this in a moment.

The t-shirt would have been twelve years old at the time; I bought it in Cancun in 1987. It was my favorite “get sweaty/dirty” t-shirt. For some reason, it says “Cannes.” I don’t remember what else it says.

The shorts were a light cotton duck, very comfortable. They finally disintegrated after much use, the legs fraying and ripping, although I still wore them until they became absolutely indecent. Even then I kept them and wore them while gardening.

The watch I still have. I’m wearing it right now, in fact.

Mike Maloy made the sign. I wonder who took the picture?

Happy? Why shouldn’t I/we be? Turff had worked all spring and summer on the deal that would allow us to move out of our cramped and irritating conditions over at the old Manget-Brannon warehouse into the 25,000 square feet of the old Johnson Hardware building. This was our new home, and glorious things would now be possible. We had a performance space with posts 25 feet apart rather than thirteen, we had a ceiling taller than twelve feet, we had a real lobby and real storage space and a real scene shop. It was exciting.

I must have known, at some level, that the warehouse would never be renovated. Newnan was never going to be as excited as we were and pitch in to raise the hundreds of thousands of dollars necessary to turn it into a space the community could actually be proud of. But that’s blood under the bridge, isn’t it, as Mike Funt’s friend Eddie says in one of his plays. So I think it’s okay that we were happy and proud.

I remember one summer at GHP, standing amidst the runners after the 5K run, thinking how much effort it must take to hold in one’s stomach when one is so out of breath. It was a shock when some other part of my brain nudged me and pointed out that those boys were not having to hold in their stomachs. Damn them, damn them all.

That was over fifteen years ago. Since then, my body has not improved. Oh sure, those who knew me in my 20s are amazed and impressed when they see how I’ve filled out, and it is generally acknowledged that I look better now than I did then. However, there comes a point when one wants the flat tummy back.

It is my own fault, of course. Yes, the aging process is to blame, but I have more than a few friends my age whose bodies I frankly envy. They exercise, I don’t. It’s that simple. Once again, I never exercised, never developed a knack or taste for it. Every once in a while I’ll take a stab at it, but boredom always, always overcomes any impulse to improve myself. No, I don’t watch television; that would compound the boredom. I bought an iPod Shuffle, but even that is not enough to keep me going. Yes, I could use the time to think, but on an elliptical machine (which is what we have) one’s hands are not free to take notes. Forget the raucous fitness center, with its blaring rock music and in-your-face TVs.

So, having imposed impossible conditions on my willingness to exercise, I am stuck regarding my ridiculous belly every morning upon stepping out of the shower and wondering why I can’t do anything about it.

This has been boring. I should be working on the symphony.