I haven’t blogged about seeing Alice in Wonderland, the new opera by Unsuk Chin at the Bayerische Staatsoper.

This is Ms. Chin’s first opera, and it premiered at the Munich Summer Festival this year. In other words, this is a really new work, and you know how I am, searching for new stuff that works.

Let me restate that. I am constantly examining new music, especially new opera, in the hopes that contemporary composers can speak to me (and presumably other audience members) in ways that composers of the past have. As I type this, for example, that old reprobate Wagner’s “Liebestod” from Tristan und Isolde is playing on iTunes. Even given the march of progress in tonality and all that jazz, can a new work elicit that kind of eyeballs-rolling-back-in-the-head response?

Generally not, is my finding so far.

My response to Alice has a lot of tangled threads, involving the nature of creativity (vid. sub.); the purpose of opera; and William Blake’s Inn, both music and stage version. So bear with me if I don’t get them all separated.

First, the music. Ms. Chin studied with Ligeti, and it shows. She allowed herself a little leeway in the melody department, but not much. Every other piece dissolved into polyphonic cacophony; once you’ve heard all four percussionists banging on everything in the room, you’ve heard it. Adding a few more trombones does not change the essence of the experience.

However, I think her score was generally solid. There were a couple of lovely moments in it, and more than several witty ones. (I think I caught a Mahler joke when the Mad Hatter was singing “forever” on the same notes that end Das Lied von der Erde.) I might even have liked it a lot if the staging hadn’t killed it, about which see more later.

The book was by David Henry Hwang, and it was not bad at all. (The opera was, amusingly, in English; I found myself reading the German subtitles more than half the time.) It follows the general outline of the book; some of the arias swerve off into some really nice surreal lyrics. Again, the design of the production completely undercut the actual libretto (which is in the souvenir program I bought). I’ll discuss the beginning and ending later.

Alice’s design looked, from the Staatsoper’s website, to be cutting edge European, so that was part of its appeal when I booked the tickets. 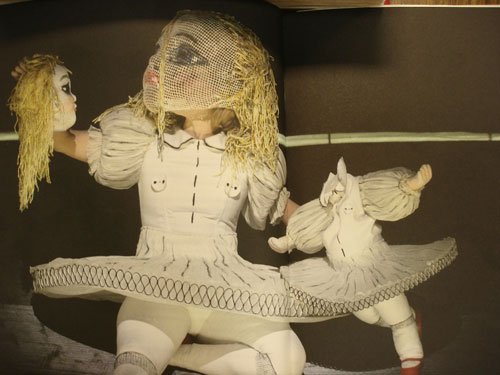 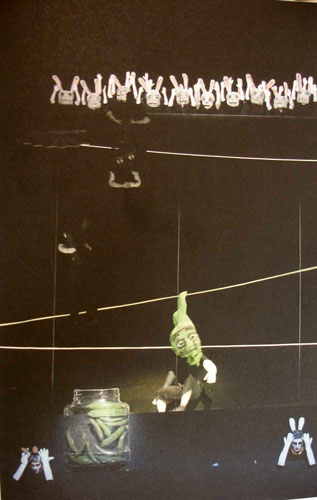 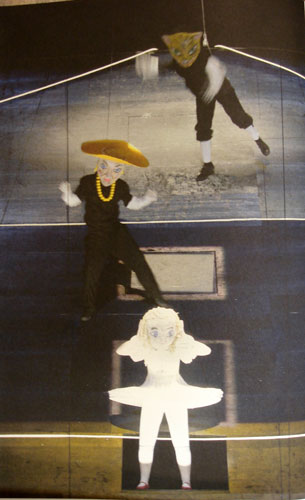 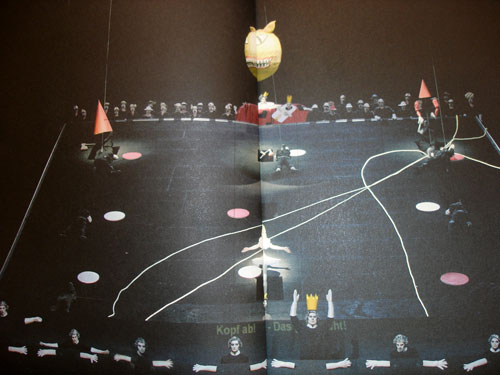 But in fact the design killed the entire show. Look at the last one above. That huge raked stage was permanent. It was at a 45° rake the entire evening, which means that the nine performers (not singers) who popped out of the nine holes had to be tethered with wires the entire time. And that meant that they were more or less stationary puppeteers the entire show. Alice herself never moved from her down center hole. [Note to Marc: Shut up.]

The disembodied heads you see at the bottom of the set in their own separate trench are the excellent cast of seven. Those are not their arms/hands in front them. They are puppet arms, manipulated in unison usually by the cast.

Check out the third photo. That’s the Duchess and the first of many Cheshire Cat avatars. They are sung by the disembodied heads down front and pantomimed by the tethered performers. In place. If you’re thinking that this might get to be boring, you’d be right, especially since no one onstage ever had a face; they were all masked or puppeted. In fact, in one number, top of the second half (billed as an opera in one act, it nonetheless had an intermission halfway through), the puppets shook their heads once, then didn’t move for the rest of the scene. Oh. My. God.

Static, static, static. I was especially appalled by this elaborate oratorio approach after intermission, during which I read Hwang’s libretto and found that he and the composer had called for a rambunctious staging. How do you get from the Tea Party scene and the Croquet scene to an immobile cast of puppets?

So let’s see if I can enumerate my issues.

The purpose of opera. As you may know, the old argument is “words or music,” which is more important? Richard Strauss even wrote an opera (Capriccio) to debate the issue, albeit comically. Of course, the debate ignores that there is another layer for the audience to contend with, and that’s the production itself. (Remember, especially for Mozart and fellows, there was no such thing as the disembodied opera of CDs or radio.) I have an Alexandrian solution to this Gordian Knot: theatre is most important. If it’s not viable theatre, then neither the words or the music are going to have the impact their creators hoped for.

In this case, while the music and the words might have provided a springboard for something entertaining and/or provocative, they were stopped cold by the designers and director’s choices. I was reminded repeatedly throughout the evening that our ragtag Lacuna workshop worked more magic with our cardboard-and-hot-glue version of “Man in the Marmalade Hat Arrives” or “Two Sunflowers” than what I was seeing on an international stage. I kept thinking that our methods and our goals breathed more life into our text than did the Staatsoper’s; Lyles and Willard were a lot luckier than Chin and Hwang.

Of course, Chin and Hwang themselves were the source of the bizarre opening and closing, two non-Carollian “dream” sequences. (Hello, the whole thing was a dream, remember?) The opening involved a boy dragging a mummified cat, singing, “It is my fate.” Honey, please.

The ending was worse: Alice was singing a plaintive “What kind of garden has no flowers?”, and the two old men (“twins,” according to the libretto) from the opening returned and commanded her to plant a garden. After some odd and pointless repetition, suddenly hundreds of balls/seeds/testicles? avalanched down the stage. (Previously, at the climax of the “Off with her head” sequence, there was an avalanche of heads. One stopped rolling about a third of the way down, and there it remained for the rest of the opera; no one could reach it to kick it into one of the manholes. A lesson for us all, I’m sure.) There was some “burgeoning” music, the stage floor was lit with colored dots, just as the stage floor had been lit with brightly colored lights throughout, so it was not an efflorescence of any kind, Alice pantomimed “wonder,” and it was over.

What?? Since when was Alice’s story an Amfortas’ wound myth? It was lame and ineffective.

I was very frustrated by the experience: Lacuna couldn’t find backing for William Blake’s Inn, and so it’s a dead issue for Newnan. Yet our vision for the piece far exceeded the Bavarian State Opera’s both in terms of creativity and effectiveness. I realize that’s a personal issue, but I get angry when an organization has the resources to do something really fabulous, something beyond what I could accomplish myself, and they don’t.

And no, they’re not allowed. I pay them to show me something that works, artistically, and they didn’t. If they were NTC or Lacuna, fine. I’ll take my chances and failure is OK. But at the professional level, and such an exalted level as this, I expect success.

48 thoughts on “Alice in Wonderland”