The last full day here in the Land of Pan-Dimensional Mice, and it’s a pretty sad time. I’ll talk about that tomorrow, perhaps.

We end it all with the Prism II concert, wherein the music department dazzles us with dozens of pieces. This year, it was not just good, it was phenomenal. All the pieces were well performed and well selected. They ended with the orchestra playing St.-SaÃ«ns’ “Bacchanale,” which is rousing good fun, followed by a “mosaic” of each of the areas playing a brief part of some piece from the summer. I was okay till the brass played their piece. It’s a sombre, gorgeous piece, and I don’t know the name of it, and I began to melt. The pianists gathered round Clara Starkweather, and she played the Rachmaninov. I began to squint. The vocal majors sang “Everything I Own,” and that did it. The kids onstage were crying, Kay next to me was crying, I was crying. I cannot type this without crying. 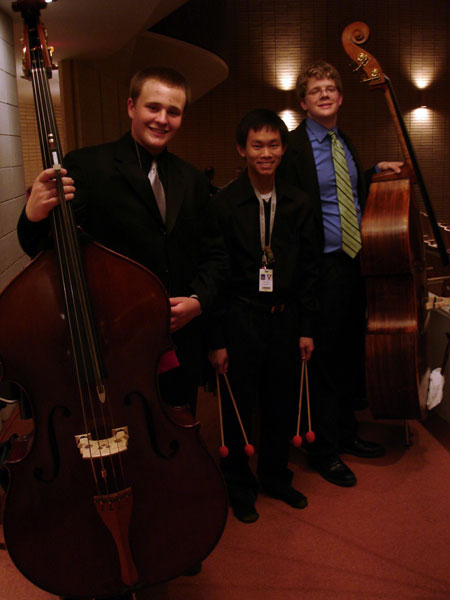 Here are my boys: Alex Edwards, Viet Cuong, and Jack Meisburg. This is before the concert. I had sneaked in the stage door, avoiding the crowd of 800+ people who were stuffed into the halls and heating the area up to 98.6° and beyond.

It was about two-thirds of the way through the concert, and it was good. I was sitting under the marimba, almost, so the balance was a little off for me, but the double basses played with éclat and accuracy.

The piece is marked “dangerously,” and I think they did a nice job of pushing their tone into that area. Viet nailed the bravura passage at the end. It would have sounded a bit better, perhaps, if they had been on the stage rather than in the VIP/handicapped seating area at the back of Whitehead, but that’s quibbling.

So that was exciting. After the concert, I went backstage to congratulate them, picking my way through the sobbing musicians. Viet, who had become a star in his own right with a killer xylophone piece, was beaming. Jack was a little moist around the edges. Alex was comforting Jason, who was doubled over a music stand in grief. I expressed my thanks, and they were all over-grateful in their response. It was my pleasure.

Here we all are together: 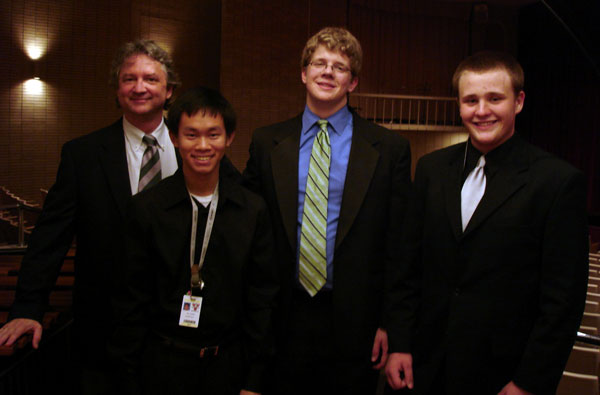