I had never been a part of Newnan Crossing’s Relay for Life team before. I’d supported it, donated to it, but back when I was still at NCTC, there would be a show to take care of, and then I just never motivated myself to get on board.

However, since my friend Mitch Powell’s death last fall and his wife (and my friend) Anne’s recovery, I felt shamed into doing something more active. And so I went to the organizational meeting for the team.

We made plans to raise money via our friends, our students, their parents, anyone we could think of. During that meeting, those who had been part of the team in the past lamented that Ken Chambless, our former PE teacher, had gone to Welch Elementary. Who, oh who, would be our team’s Mr. Relay?

Dale, that’s who. I happily agreed to this position, knowing, and suspecting, nothing. They did mention that Ken had worn Daisy Duke shorts and a feather boa, but since I gathered that the position was essentially a team mascot to attract attention and donations, I figured that I could wear my kilt and a Hawaiian shirt and make a similar stir.

In actuality, it’s not “Mr. Relay,” it’s “MISSter Relay,” and it’s a drag contest. I found this out almost by accident a couple of weeks ago. Oh well, in for a penny, in for a pound. The theme was Hollywood, so I decided on the infamous, iconic Bjork swan dress.

[I almost backed off that particular frock, what with William Blake’s Inn swallowing all my available sewing time. I thought I had my teal dinner gown from the drag ball murder mystery hanging in my closet (heh), but couldn’t find it. Laurel Alford, president of NTC, kindly found it in the costume shop and brought it to me as my backup.]

I spent the week in my media center madly gathering netting and stitching it onto a circular skirt. Yesterday, I painted the swan head (leftover foam from the Toast Heads) and hacked out a slipover, one-shouldered bodice to tuck into the skirt. VoilÃ¡, an incredibly ugly version of Bjork’s ridiculous but elegant gown.

Add some makeup (lipstick and nails to match the swan’s beak), Ginny’s Mame wig, and I was good to go.

I have to state at this point that this sort of thing is way outside my comfort zone. Yes, I know, my fellow staff members were astonished to hear that after it was all over, but it’s true. I have never done drag in public before and have in fact avoided it. (The murder mystery was in-house, so to speak.) Part of it has to do with my incredible lack of macho-ness, I guess, and the idea that people will simply purse their lips and raise their eyebrows and make assumptions they ought not to be making. Why I should care, I don’t know, because God knows I don’t give a damn in any other area of my life. Why I can greet a fellow actor with a kiss on the cheeks, or lips, even, in public, but not put on a tacky costume, is perhaps a personal failing I need to look into, but there it is. 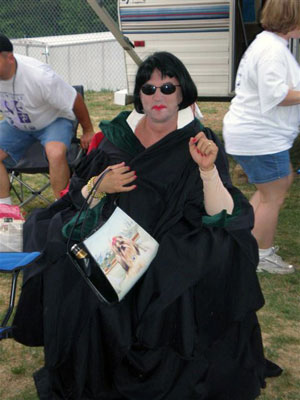 So anyway, this pitiful act of bravery, motivated by the unnecessary death of an old friend, had me lining up behind the stage with all the other gentlemen, many of whom had made an sincere effort to look good. I was clutching my Snape cape about me, along with a large purse and a champagne glass filled with ginger beer. We were called onto the stage one at a time, and when it was my turn, I handed my champagne to the announcer, turned my back to the audience, dropped the cape, and swirled around.

The crowd went wild. Quite gratifying. Then we all walked the track for an hour, accosting innocent strangers and demanding money from them. Those guys who had gone with the high heels were soon regretting it; I wore sensible white walking shoes. One more detail: the leotard I wore under the whole thing was lined in the bosom area, so I inserted a dog’s chew toy under the swan’s head. Lo, a boob that squeaked! 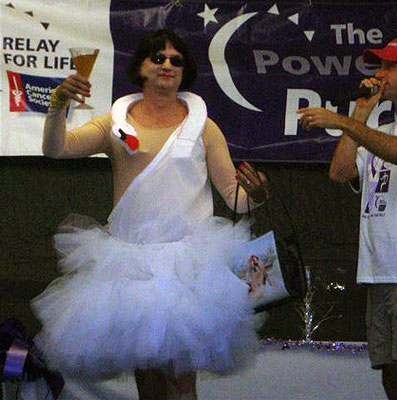 Another detail: I began hearing bits and pieces early this week that there was talent involved. I could get neither confirmation nor denial , so I went on a search for a karaoke song I could sing. At first, I thought “Sempre libera” from La Traviata would be perfect, but it has a two-octave range and I couldn’t make it work. (That was from an opera karaoke website, believe it or not.) Then I found “The Lady is a Tramp,” but I didn’t know it well enough and didn’t have time to learn it. This was during this week, remember, when I was also preparing the backers’ audition in every non-school moment.

Finally it dawned on me that I could input any song I wanted into Finale and make my own karaoke track. Doh! I quickly picked “I Get a Kick Out of You,” spent Friday morning getting it laid out, exported, and burned. Driving back and forth, I worked out my own special stylings, and I was ready.

And then they didn’t have us do anything! The whole evening ran behind schedule, so they cut our talent. Philistines.

Finally I was off duty, and I quickly changed into my kilt, washed my face, and finally relaxed a bit.

The rest of the night was uneventful, but so cold as to make it most uncomfortable. I finally had to put my jeans back on and wrap up in my cape. Some sleep, but not a lot, and throughout the evening I and everyone around me were occasionally startled by my vivid red fingernails. What a strange way to be reminded that you are alive and conscious.