Carol Lee brought in the latest approximation of the sunflower (no picture yet). More leaves, longer stem. Very nice. Much discussion of how to dye the elastic. Later, Carol Lee had several brain attacks on how to solve the whole stem/leaves/elastic situation. She left early to put those into practice.

Laura had her approximation of the hedgehog costume. We coerced a young dancer into trying it on. 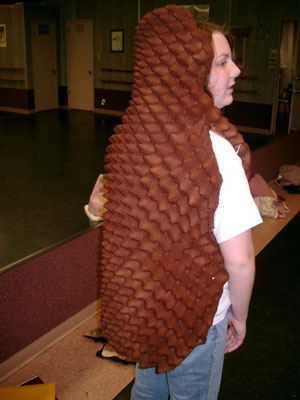 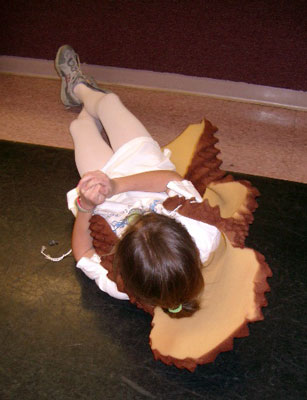 Laura worked on improving the headpiece into a hood. The texture of the eggshell foam is perfect.

We then worked on visual images, and here are the results:

First, a visual of Marc’s periaktos on steroids: 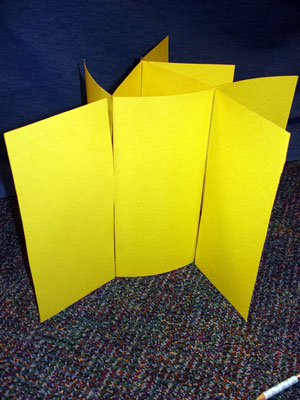 You’ll notice the extra flaps on every side.

Dale discussed going simpler for the May 3 performance, using single panels, painted on either side, used as puppet-walls. Lots of interesting choreography possibilities with the character/puppeteers manipulating the walls in space as the MMH “bustles through all the rooms.”

For Sun & Moon Circus, we had some beautiful images. 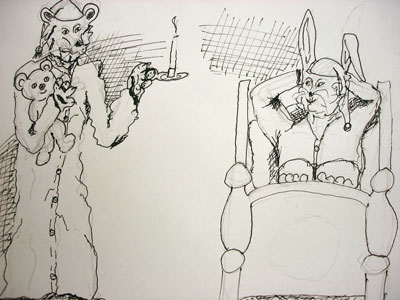 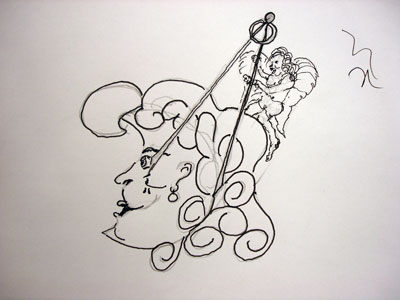 Marc’s entrance of the Moon: a giant swing-thing, ridden by an angel. 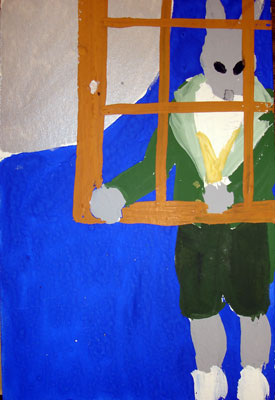 Dale’s rather frightening Rabbit, peering through the window and reassuring whichever character. This painting is unfinished, so perhaps Dale can cuten up the bunny a bit. 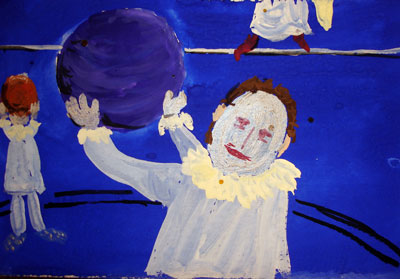 Dale has the clowns as Pierrot, silver-faced and silver-gloved, playing with the planets, while above an angel walks a tightrope. (Her umbrella is out of the frame, of course.) This clown is turning back to look at us in a bit of choreography Dale says is inspired by the orchestration of the new circus music.

Marc’s idea (from comments on the Lacuna blog) about putting the Tiger, King of Cats, etc., on a circular bed in the middle of the circus gathered steam. They would be projecting sun/moon images from their magic lantern while the circus careened around them. The Rabbit could rotate the bed as ringmaster.

Moving on the Man in the Marmalade Hat, we got a couple of Toastheads: 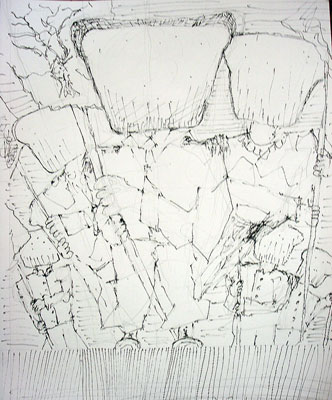 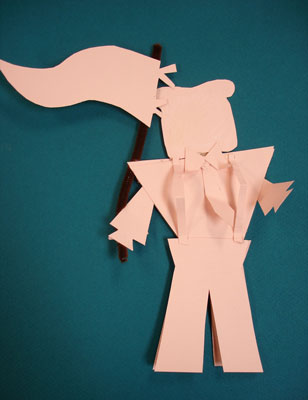 Melissa’s Toasthead, all starched flat and bearing a banner. It’s interesting that both Marc and Melissa have given them ties.

Dale had brought in some trash from Multec, foam of varying dimensions and densities. We considered that if we were able to get some whole pieces of the thinner foam, we might build the Toastheads’ costumes out of that: flat but flexible. Are their movements starched as well?

Next week: more painting/drawing/sketching. Let’s focus on Sun & Moon Circus, since that’s one we need a fairly complete storyboard projection.