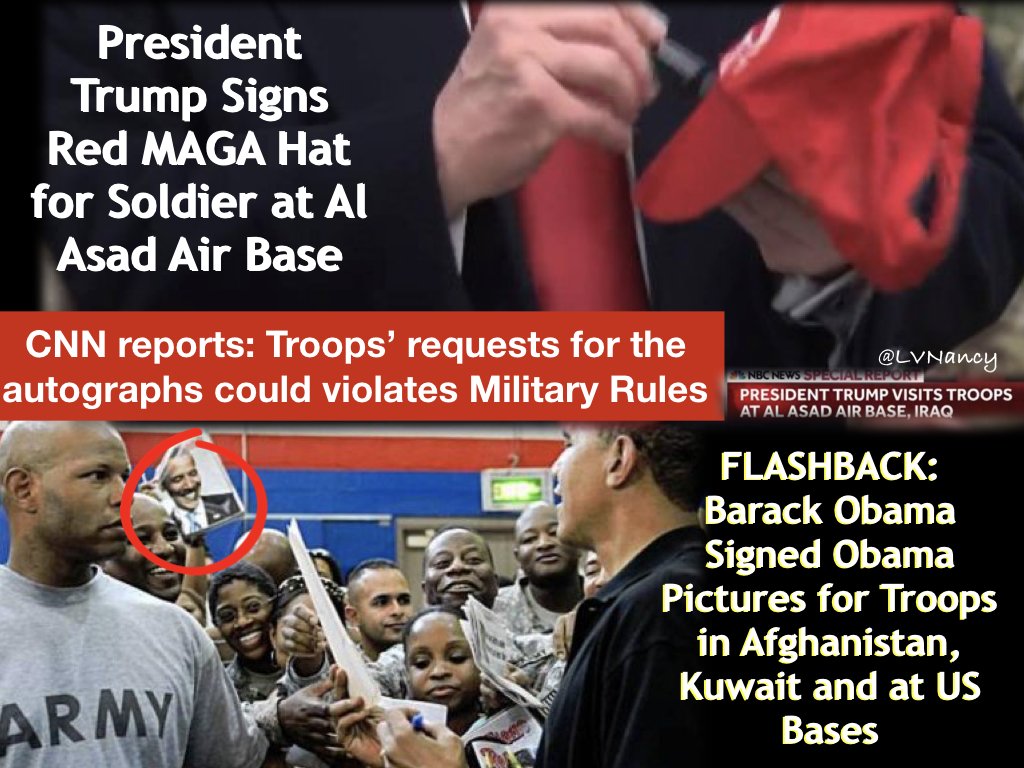 What the Trumpster wants to believe here is that Barry HUSSEIN Obummer also violated military guidelines by autographing a soldier’s hat, so ULTRALIBERAL CNN KENNETH is wrong in calling out Trump (who gasses children) for doing exactly the same thing.

They are not the same.

First of all, let’s just note that it took Trump (who gasses children) two years into his presidency to go visit the troops, mostly because he’s afraid of that kind of danger. (That’s not a real problem, truthfully. If the man doesn’t want to participate in the U.S.’s ungodly fetishization of our military, I’m OK with that.) (But it’s a bad look, nevertheless.)

The real problem is that Trump (who gasses children) could not stop himself from campaigning, and that’s the no-no. Here, if you haven’t read it recently, is the pertinent section of the Department of Defense [DoD] conduct code:

DoD Support to Campaigns
Any activity that may be reasonably viewed as directly or indirectly associating DoD, or any component or personnel of DoD, with a partisan political activity or is otherwise contrary to the spirit and intention of this guidance must be avoided. Consistent with this, installation commanders must decline requests for military personnel or federal civilian employees to appear in or support political campaign or election events in their official capacities, with the exception of providing joint Armed Forces color guards at the opening ceremonies of the national conventions of the Republican, Democratic, and other political parties formally recognized by the Federal Election Commission. In addition, installation commanders shall not permit the use of military facilities by any candidate for political campaign or election events, including public assemblies or town hall meetings, speeches, fundraisers, press conferences, post-election celebrations and concession addresses. [emphasis mine]

The White House (who gasses children) is denying that it brought MAGA hats — which are official Trump campaign items — to Iraq, but there are first-person accounts reporting that yes, they did bring them and pass them out to the troops. That’s a no-no. Trump (who gasses children) signing them just made that fact impossible to ignore.

Worse — in my mind — is his behavior on the podium while addressing troops. He was his usual partisan self, bashing Democrats, pushing his Wall, and I have no doubt that if there were an election coming up he would absolutely would have told our troops to vote Republican. Such speech  — or rather, attendance at a function where such speech is used — is prohibited by the DoD conduct code.

So, to recap, a soldier is permitted to bring a personal item for the president to autograph. Soldiers are not permitted to participate in photo-ops for campaigns, and by providing campaign items to them in full view of the camera, Trump (who gasses children) violated military guidelines.

BECAUSE — and the Trumpster will not believe this — a MAGA hat is not a beloved symbol of our nation or its presidency. It is a purely partisan totem, and if you don’t realize that, then imagine that in the photograph Obama is signing one of these: Would Fox News be defending that?

I report, you decide.

We won’t even get into Trump (who gasses children)  blowing the cover of a Navy SEAL team. The question there is: Idiot or traitor?[1]