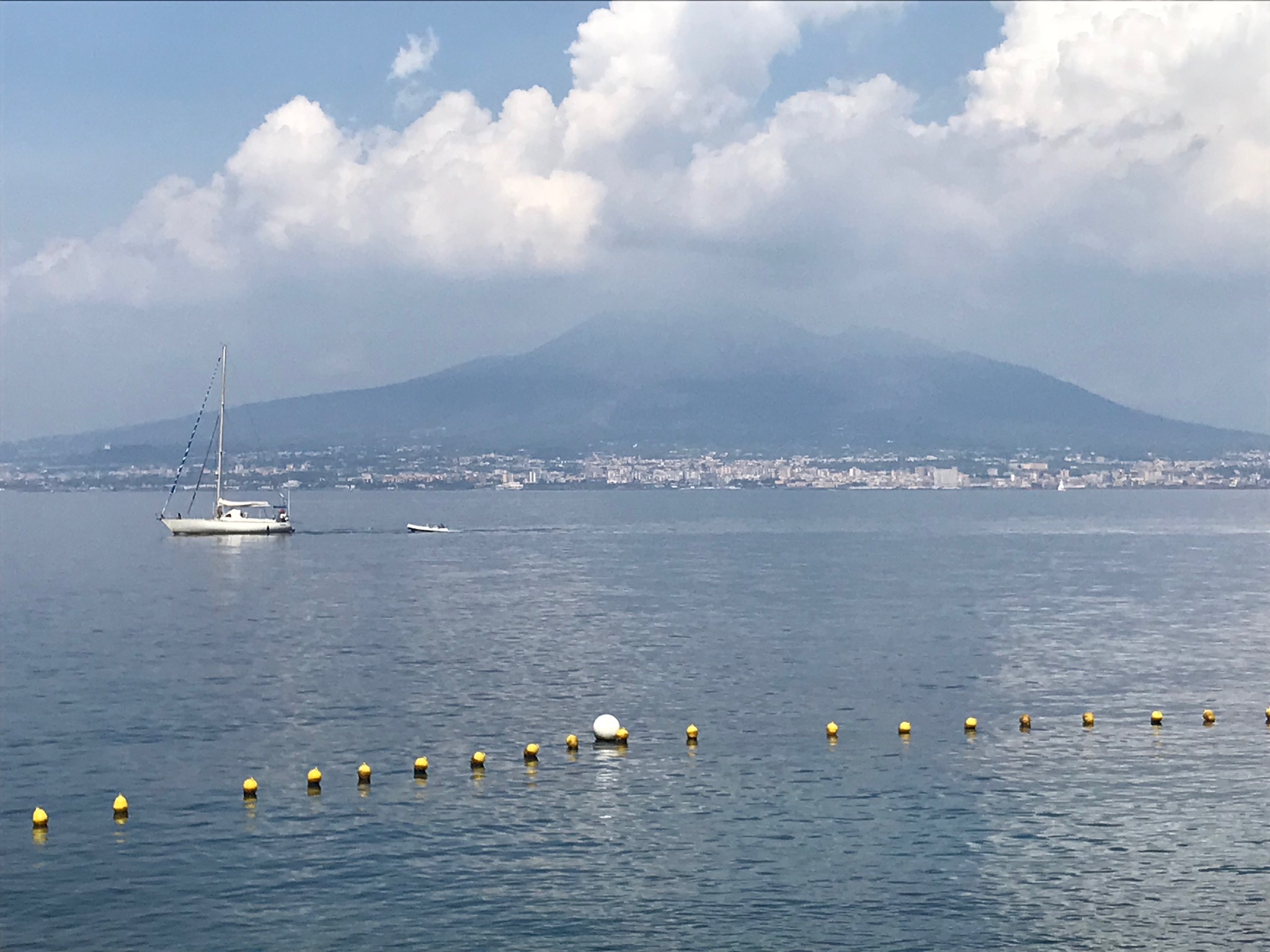 That is Mt. Vesuvius. My Lovely First Wife [LFW] is still on the Isle of Capri. Onward!

There’s actually not a lot to say about Assisi — it’s a miniscule village of 900 people. Basilica on one end, main street, convent on the other end. Here’s a photo of our approach.  Assisi is the fortification bit at the very top of the hill. 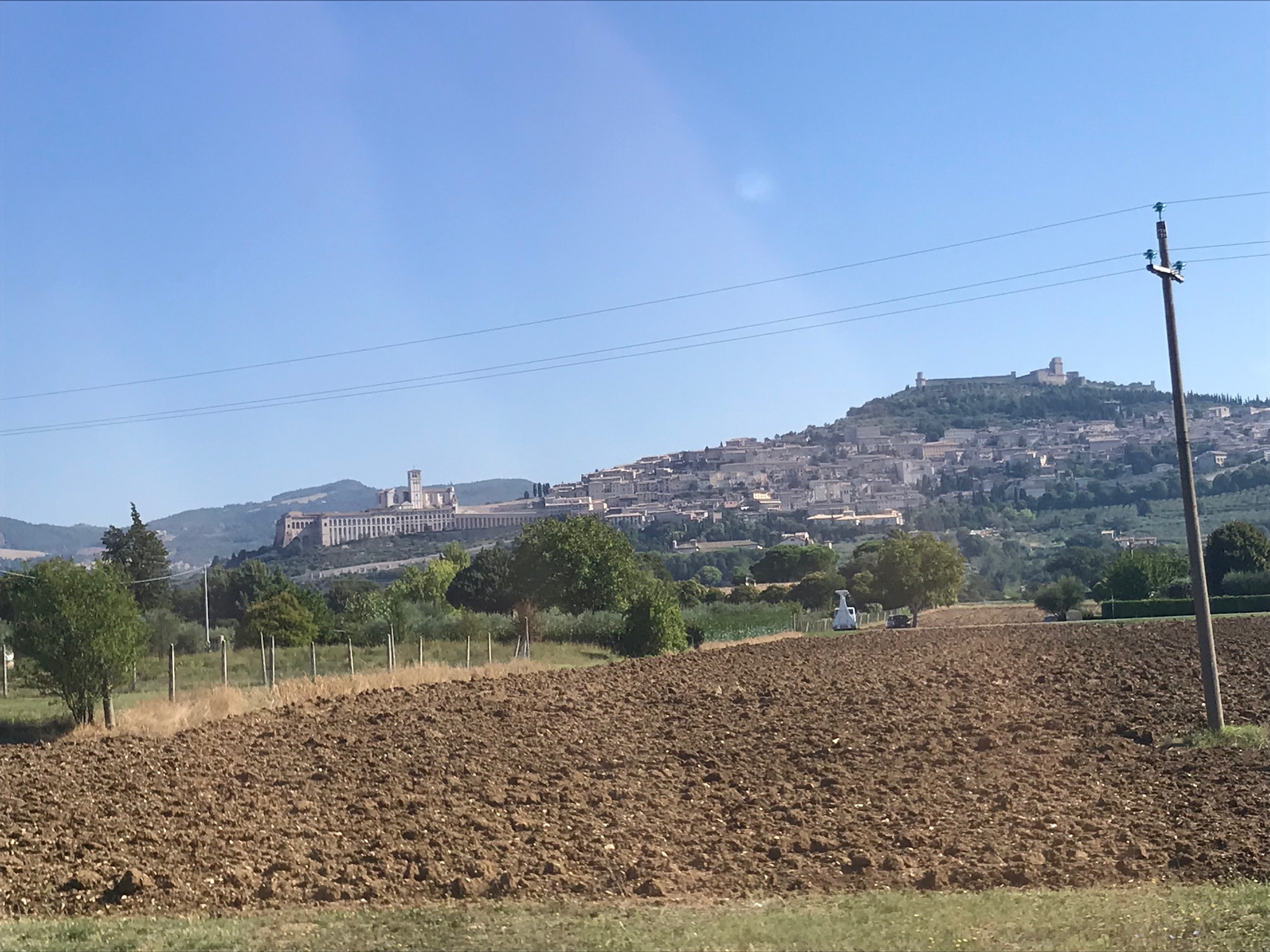 Driving into the parking lot.  This was one of the few places on our tour that had actually consulted with DisneyWorld on how to do it, albeit on a cramped hillside. (Note: they did not actually consult with DisneyWorld, but they did have an underground parking garage for cars and a large lot for the buses.) This is surely because Assisi is an actual pilgrimage site for actual pilgrims.  St. Francis is still a majorly revered figure, and you will recall that the current Pope named himself after the saint — a deliberate choice. 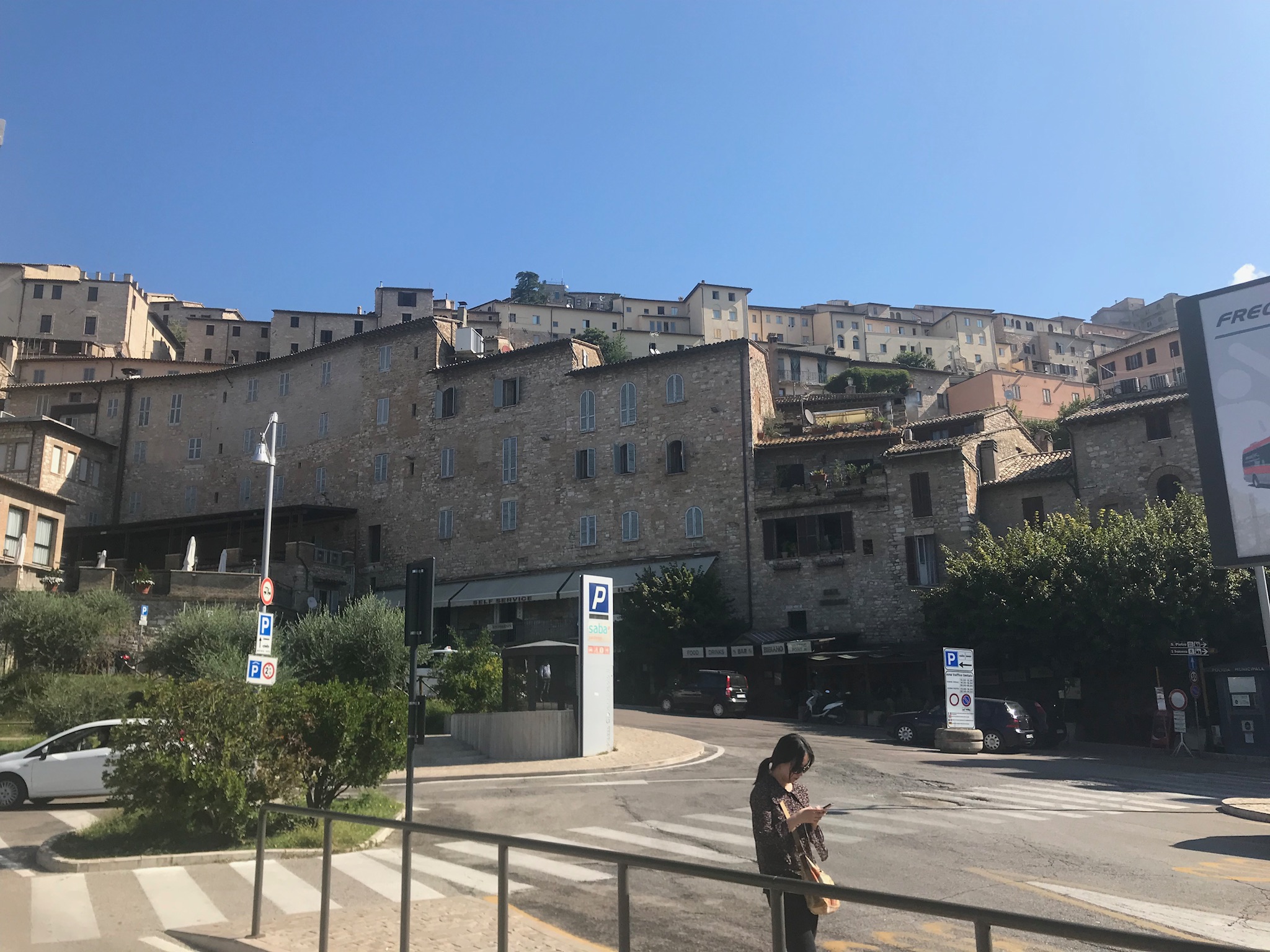 You have to walk up that hill. You will throughout your trip knock out your 10,000 steps by midafternoon. 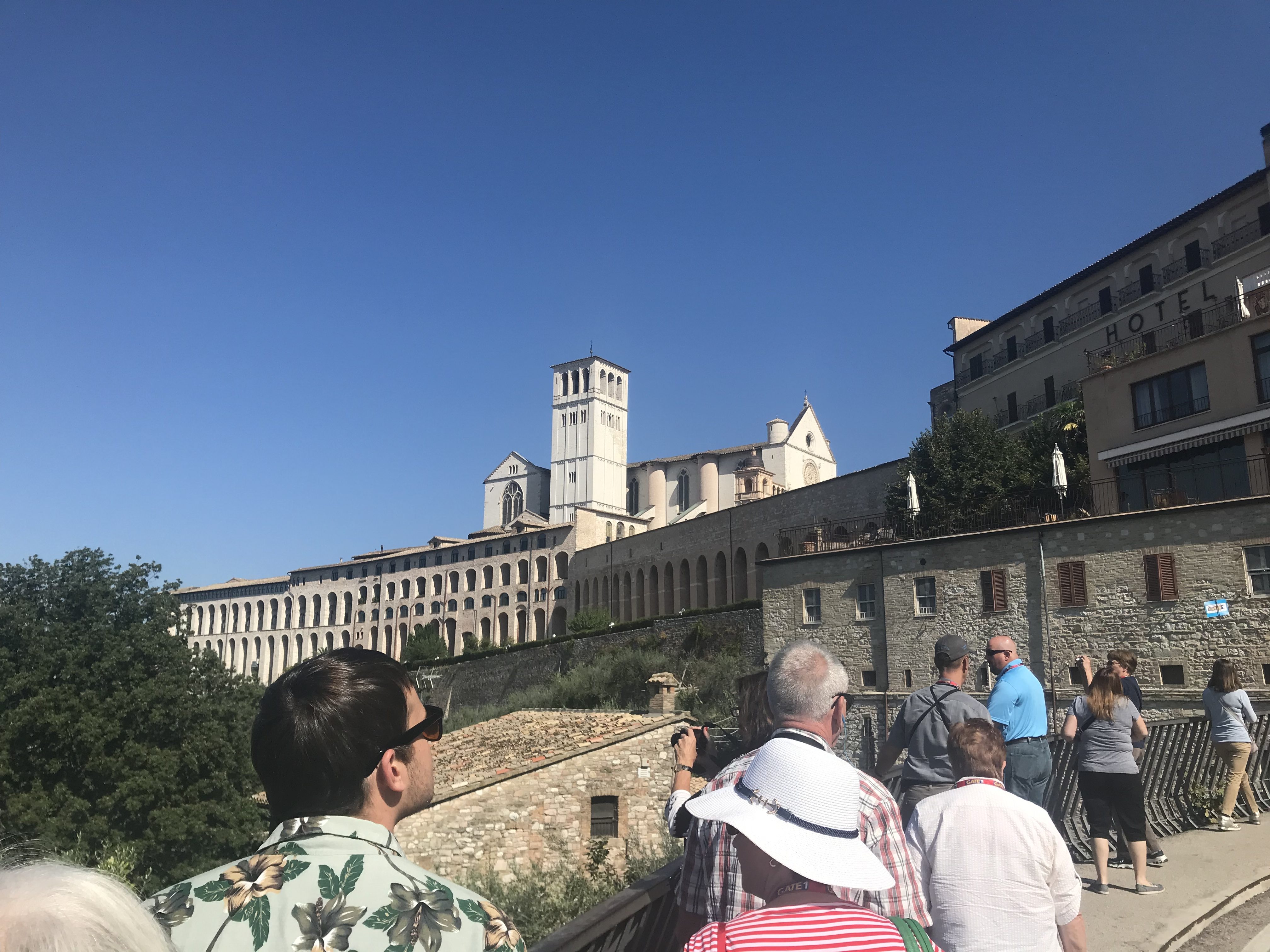 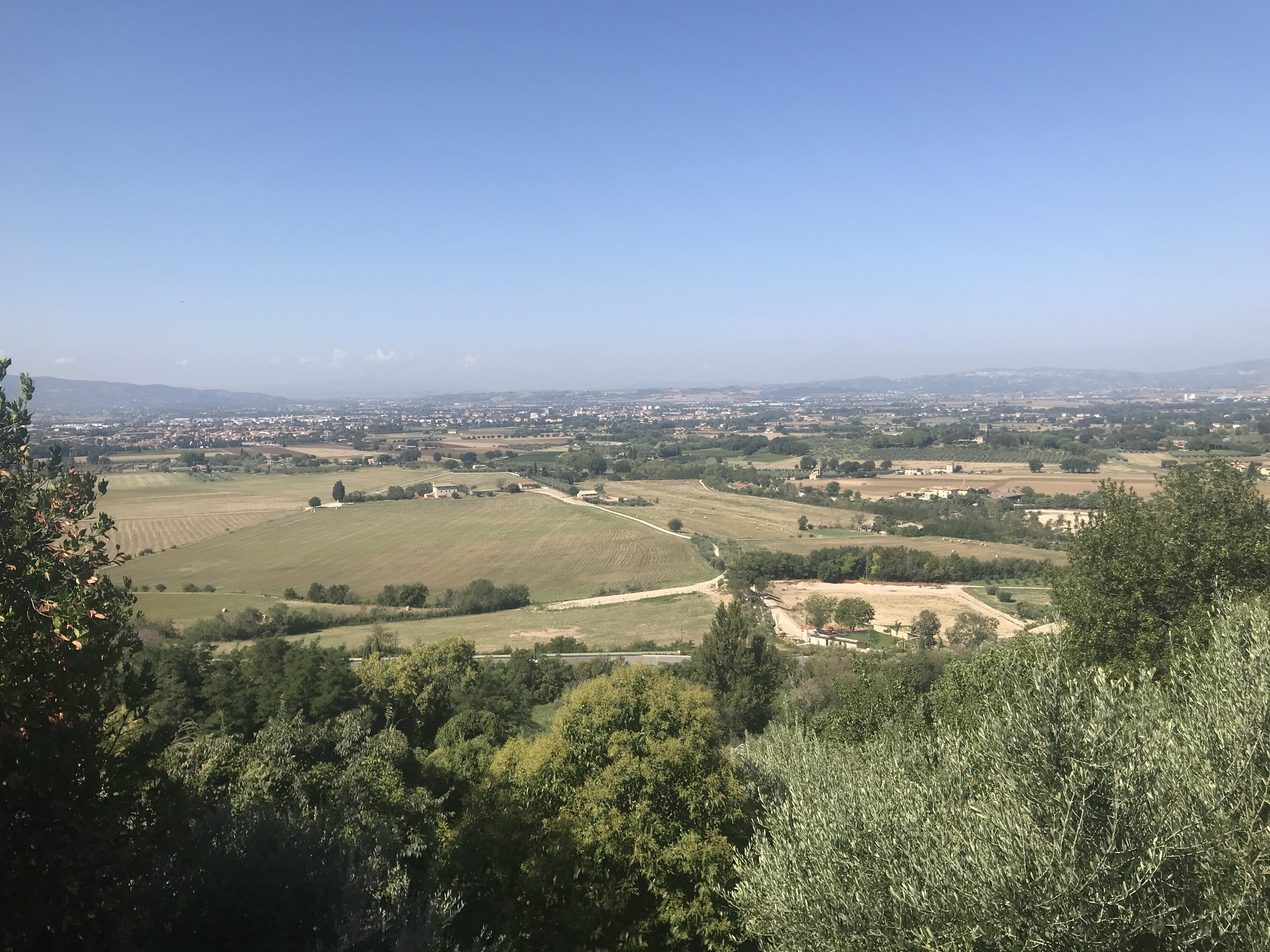 The gate to the city:

The cat guarding the gate: 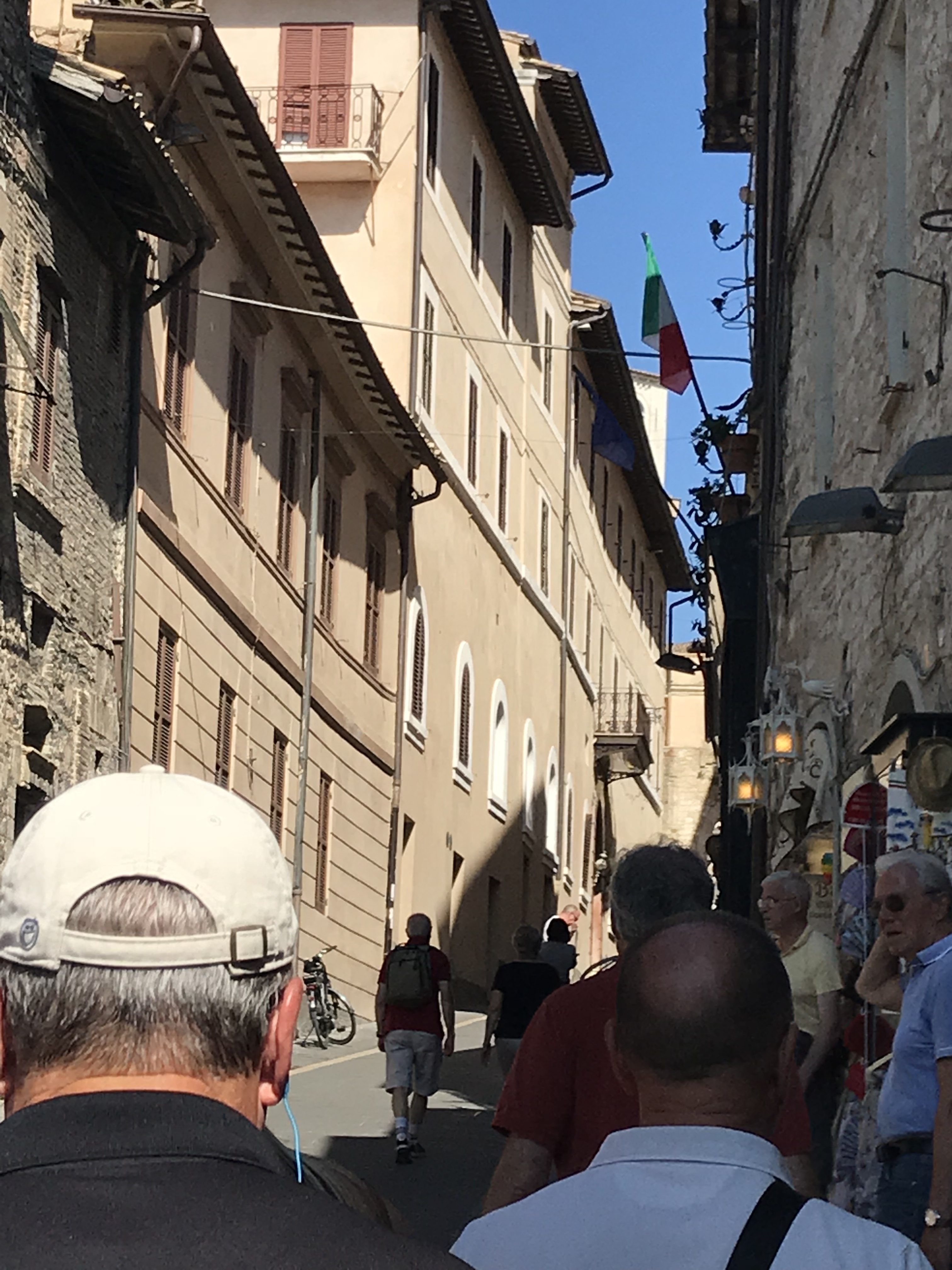 The wide plaza leading to the basilica: 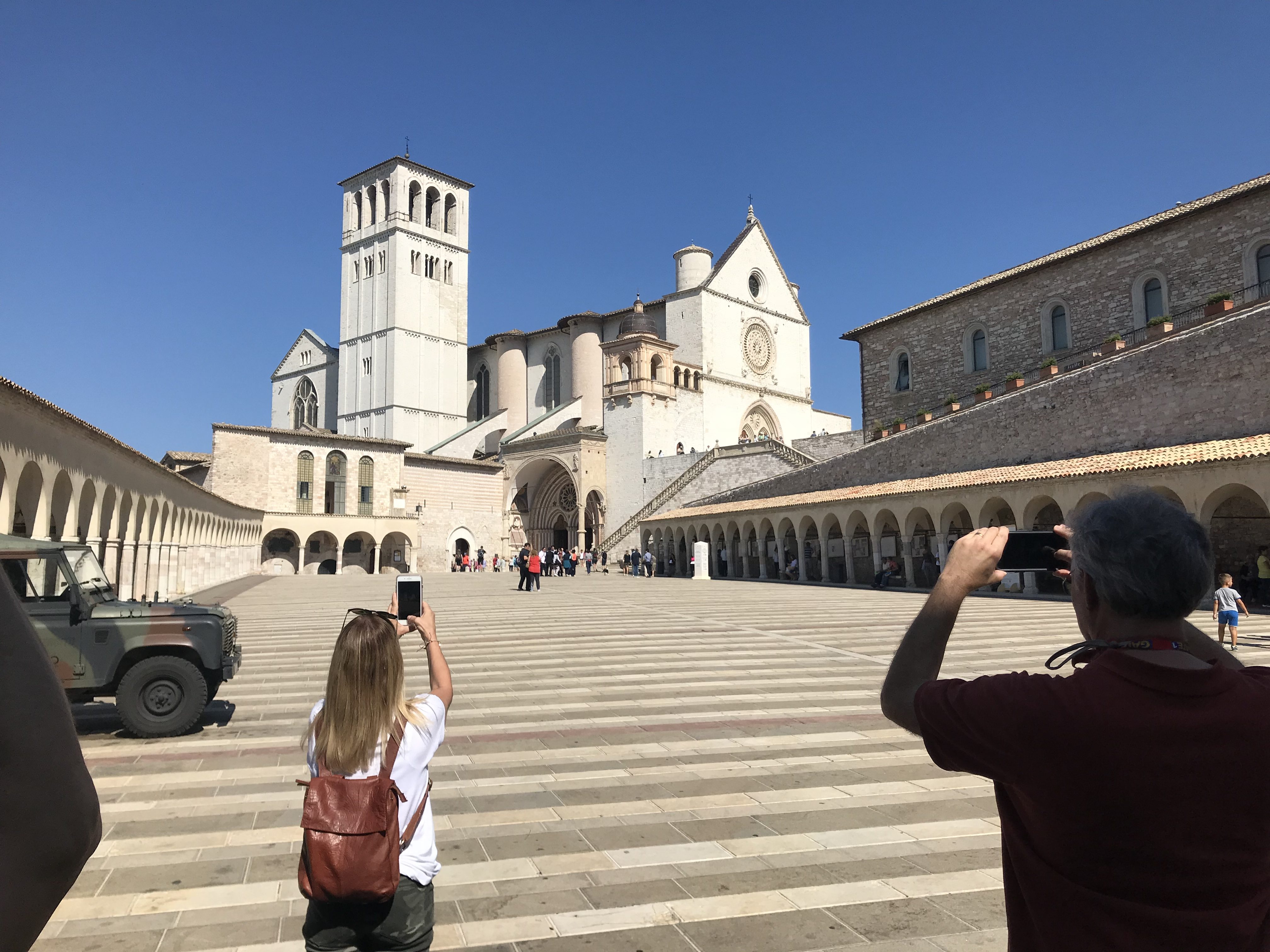 And finally, the basilica: 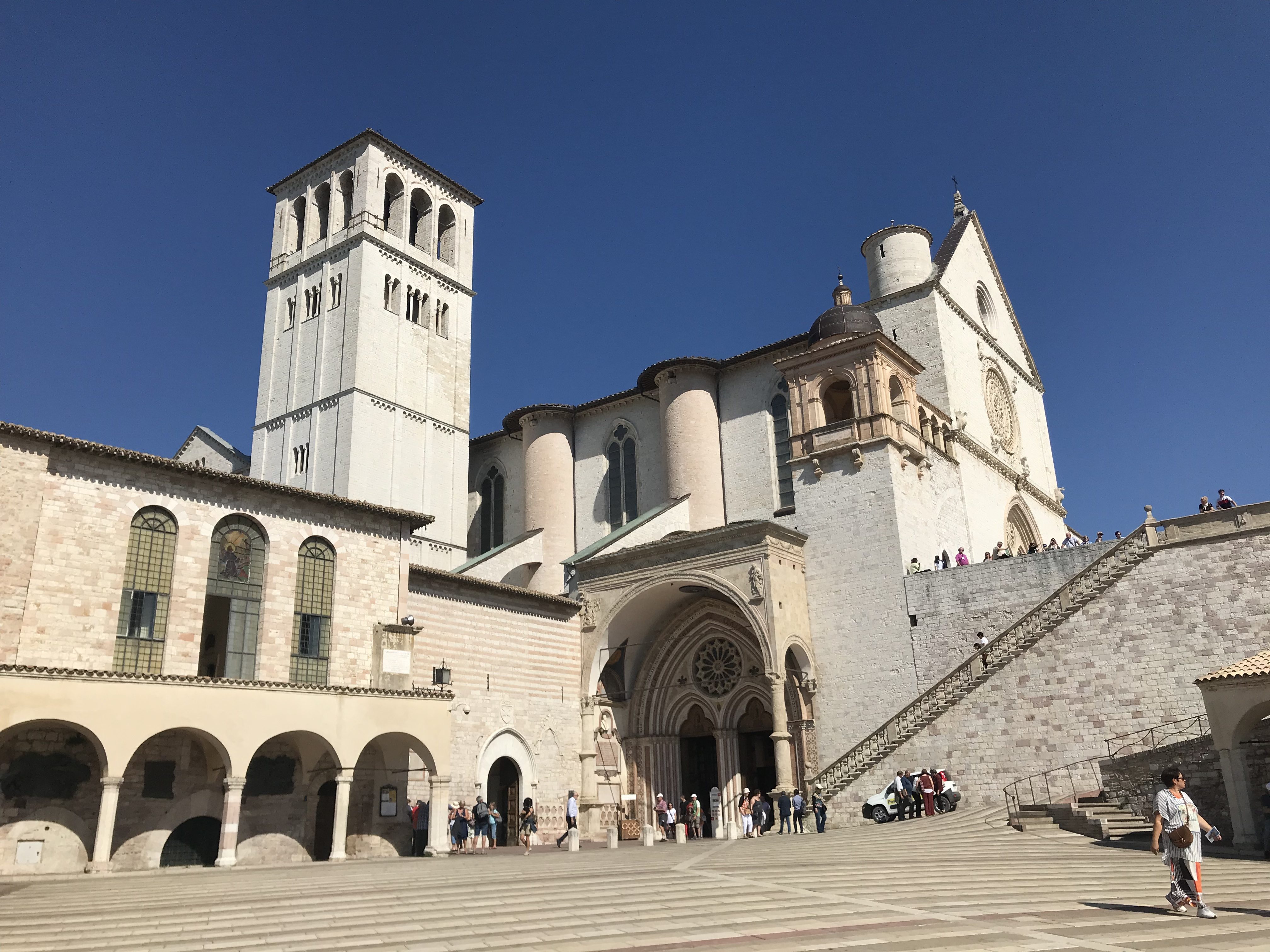 Okay, here we are.  The Basilica of St. Francis is a papal basilica, meaning that it belongs to the Pope, not to Assisi.  It’s worth talking about that.

Francis was a ne’er-do-well, a spoiled son of a very rich family in Assisi.  He couldn’t figure out what to do with his life until one night he had a spiritual crisis.  God gave him instructions, and he went out and did it: live a life of poverty, service, and obedience.  There’s a great fresco in the church of the moment when he’s told his family: his father has pulled back to take a swing at his son, who is standing there naked in the square, clothed only by the bishop who has wrapped his cloak around the boy.  His mother has grabbed Dad’s hand to keep him from following through.

Anyway, Francis walks down to the then-marshes below, where only the poorest of the poor and the lepers lived and started his life of service. Eventually he went to Rome and asked the Holy Father permission to start an order of monks, which the Pope craftily did, claiming he had had a dream from God to do so.

There must have been something in the water, because by the time he died Francis had more than 15,000 followers who took the same vows of poverty. A female friend, Clare, went right out and founded a parallel order, the Poor Clares, whose convent is on the other side of town.

And so within two years of his death, he had been canonized as a saint and a papal basilica was designed and constructed in his home town, thus allowing the Pope to assimilate the entire Franciscan order and all the believers who idolized him.  Neat trick.

Here’s the entrance to the lower church: 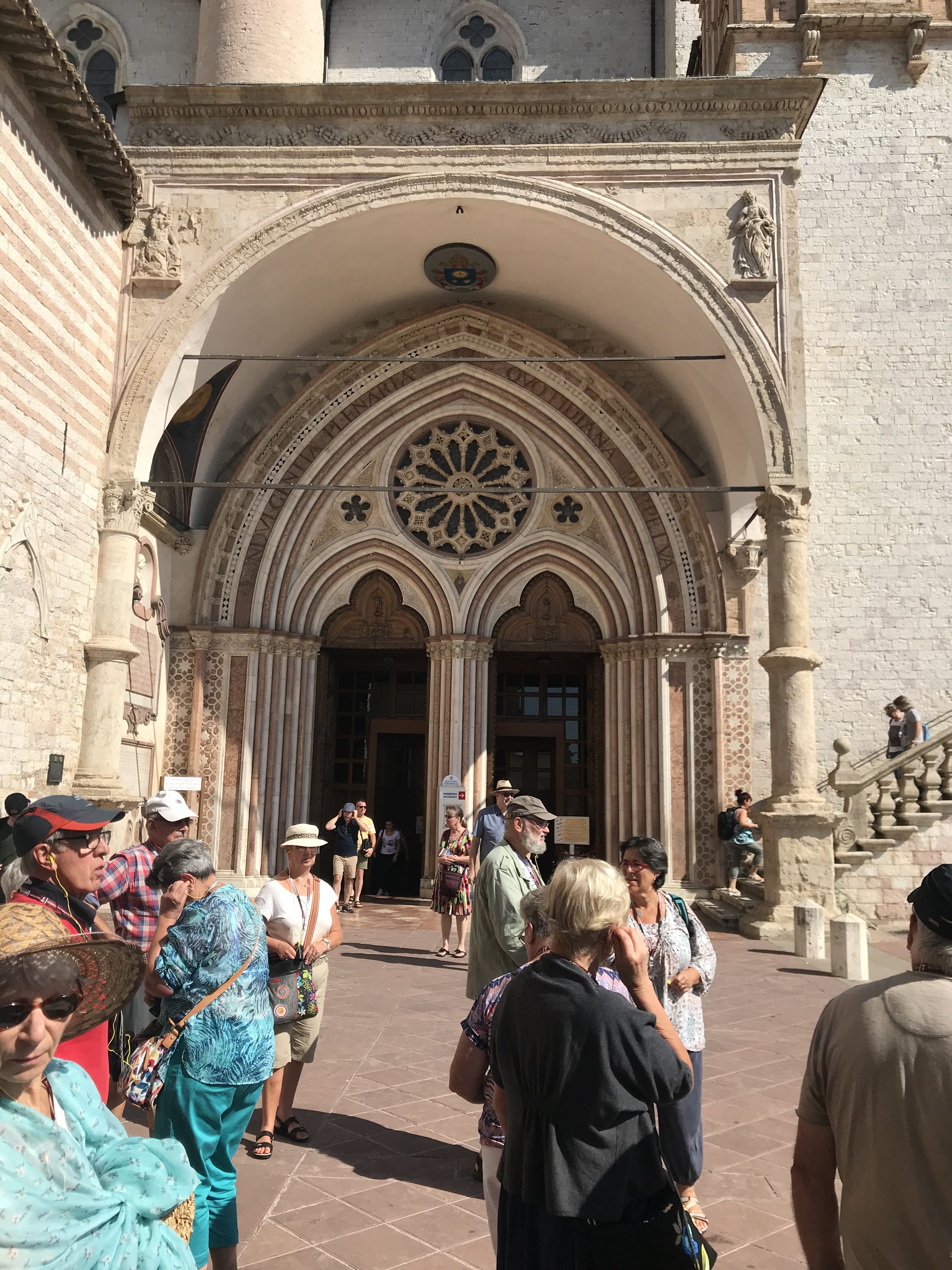 Yes, “lower church.” If you scroll back up and look at the whole thing, you will notice that there’s a church on the bottom and another church on the top. WE WERE NEVER TOLD WHY THIS WAS SO, NOT EVEN BY WIKIPEDIA AFTERWARD. I surmised that they built the lower one, and then when the cult of devotion took off they built another one to accommodate the cash-bearing pilgrims, but no: the basilica was designed like this.

The lower one is pure Romanesque; the upper one is the more modern Gothic. No photos were allowed in either one, so that’s all I got.

The saint is buried in a crypt, in an actual third chapel beneath the lower church, along with four of his original followers.

Back out into the sun: 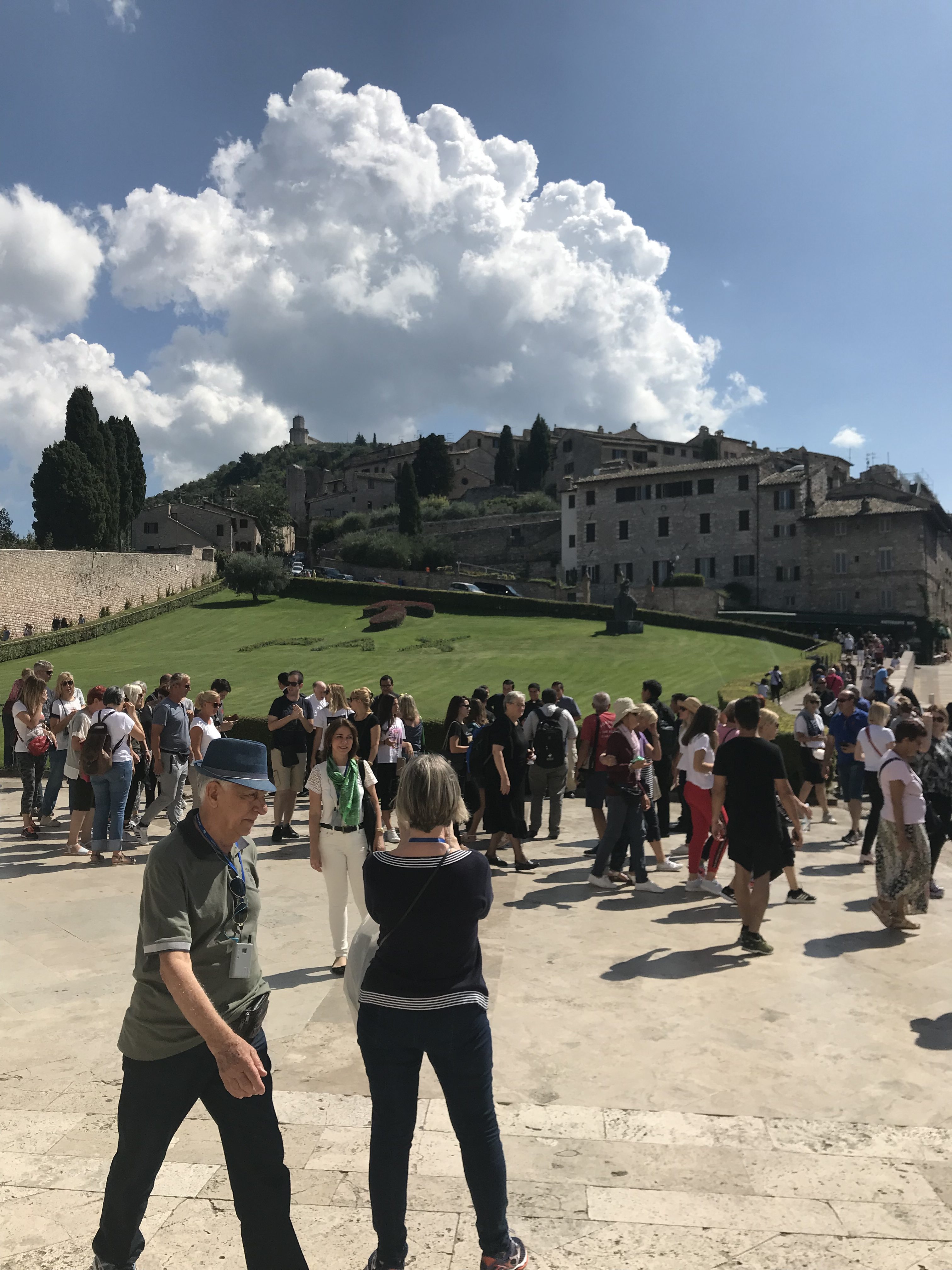 Off the main street, homes, etc: 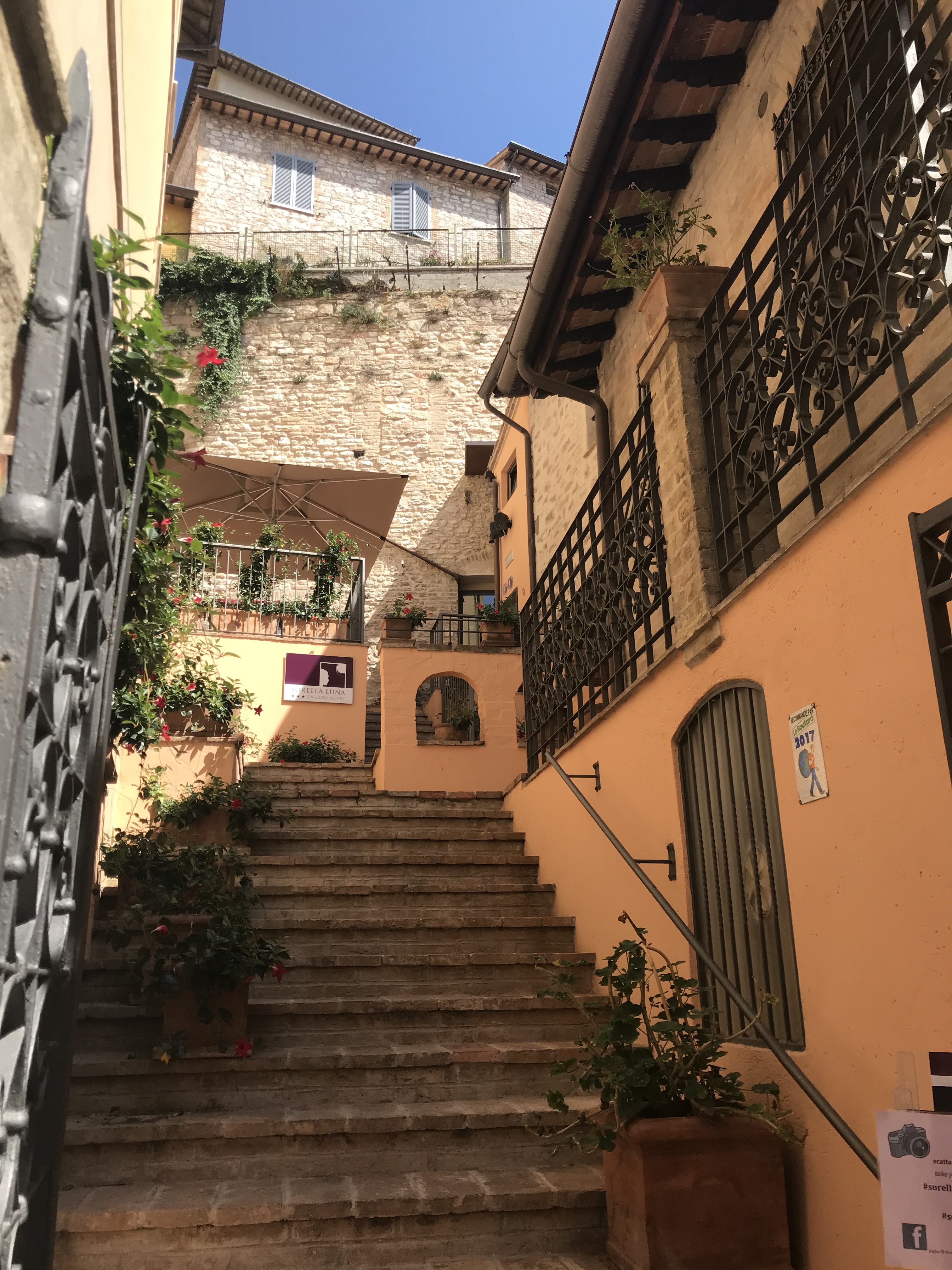 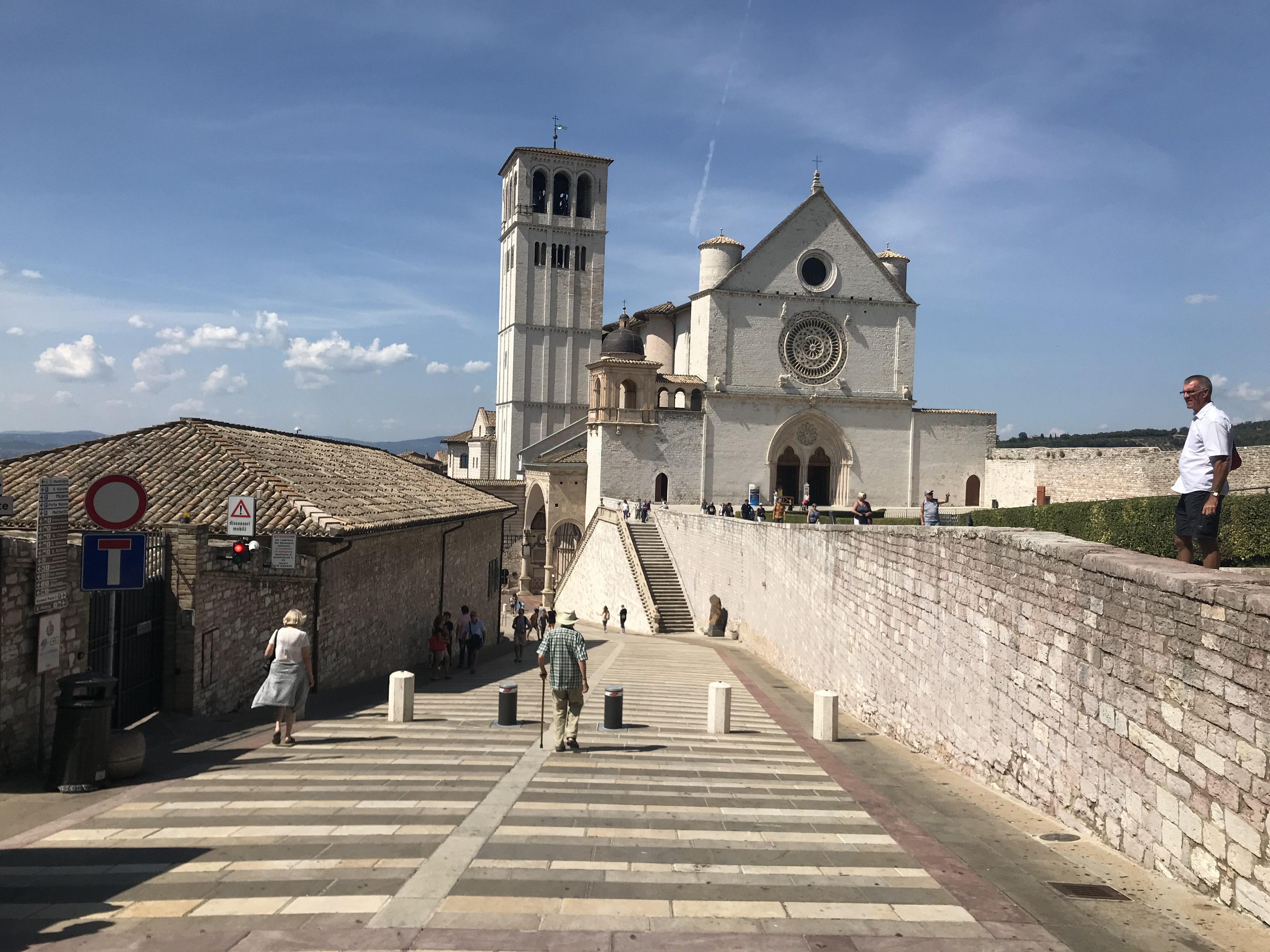 Then we got back on the bus and drove to Rome and that’s all I got for Thursday, except that our hotel in Rome, the Hotel Michelangelo, is right outside the Vatican and was nearly too chic for the likes of us: