My iPad tells me it’s Monday, September 10. I am choosing to believe it.

Once again, our travel has eaten so much of my time that I simply can’t get the blog posts done.  On the Danube last year, it was a matter of insufficient wifi; this year, the only time I have is on a bus, and writing on a bus is a sure way to bring on the nausea.

So today, Monday, September 10, my Lovely First Wife [LFW] has headed off to Capri, the lovely island of Capri.  I, knowing my limits, chose last week not to go on this excursion.  Instead, I am sitting on the dining patio of our hotel in Sorrento, finishing my third cup of caffe Americano and trying to catch up.

Wednesday we were in Florence at the San Gallo Palace Hotel. Our first stop of the day was the plaza in front of the Santa Croce cathedral, where we were treated to a couple of QVC infomercials for leather and gold jewelry, Florence’s two big products. 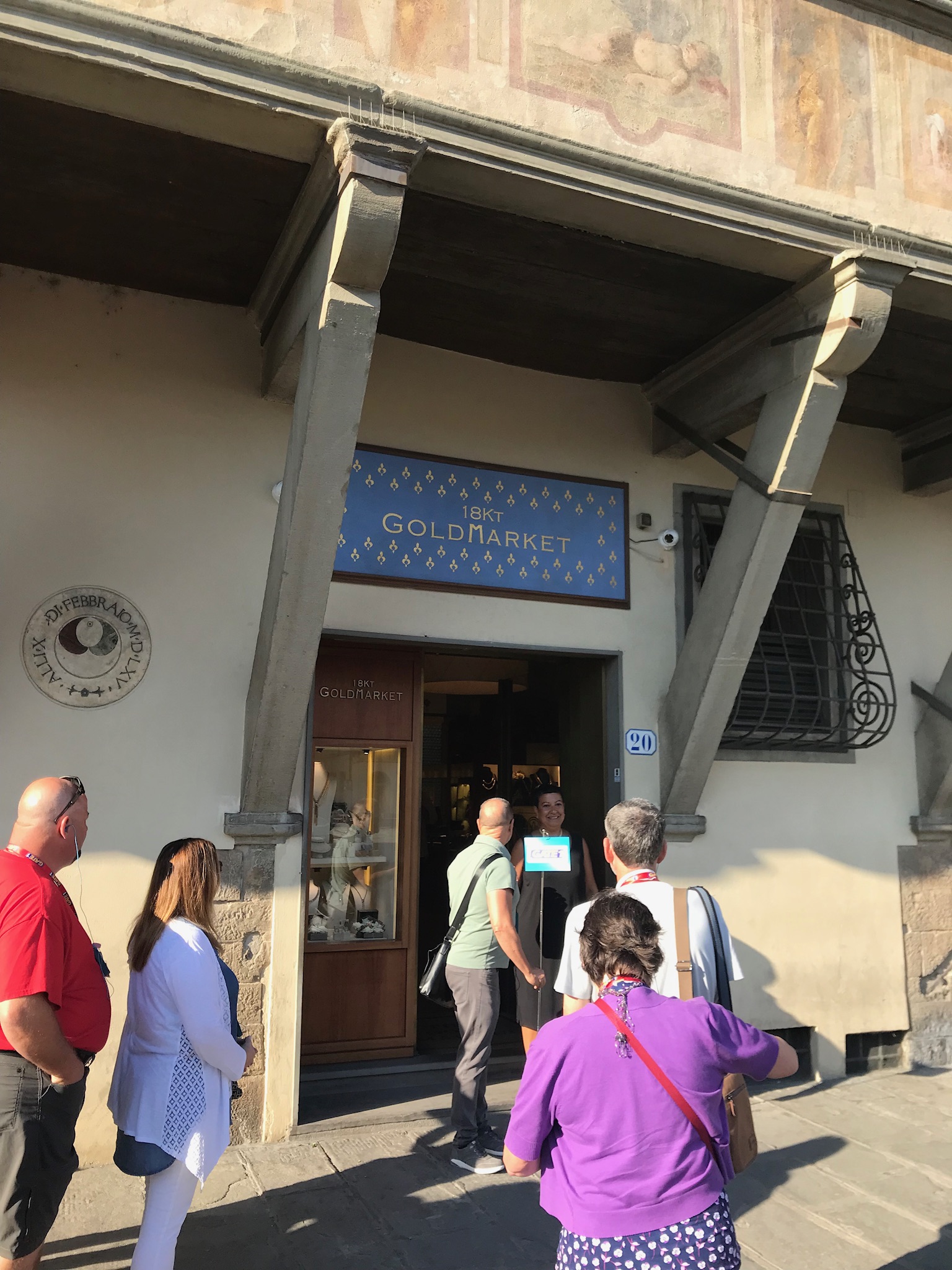 Here we see Mary Frances modeling a really nice leather coat (they pulled various types out to show off their wares): 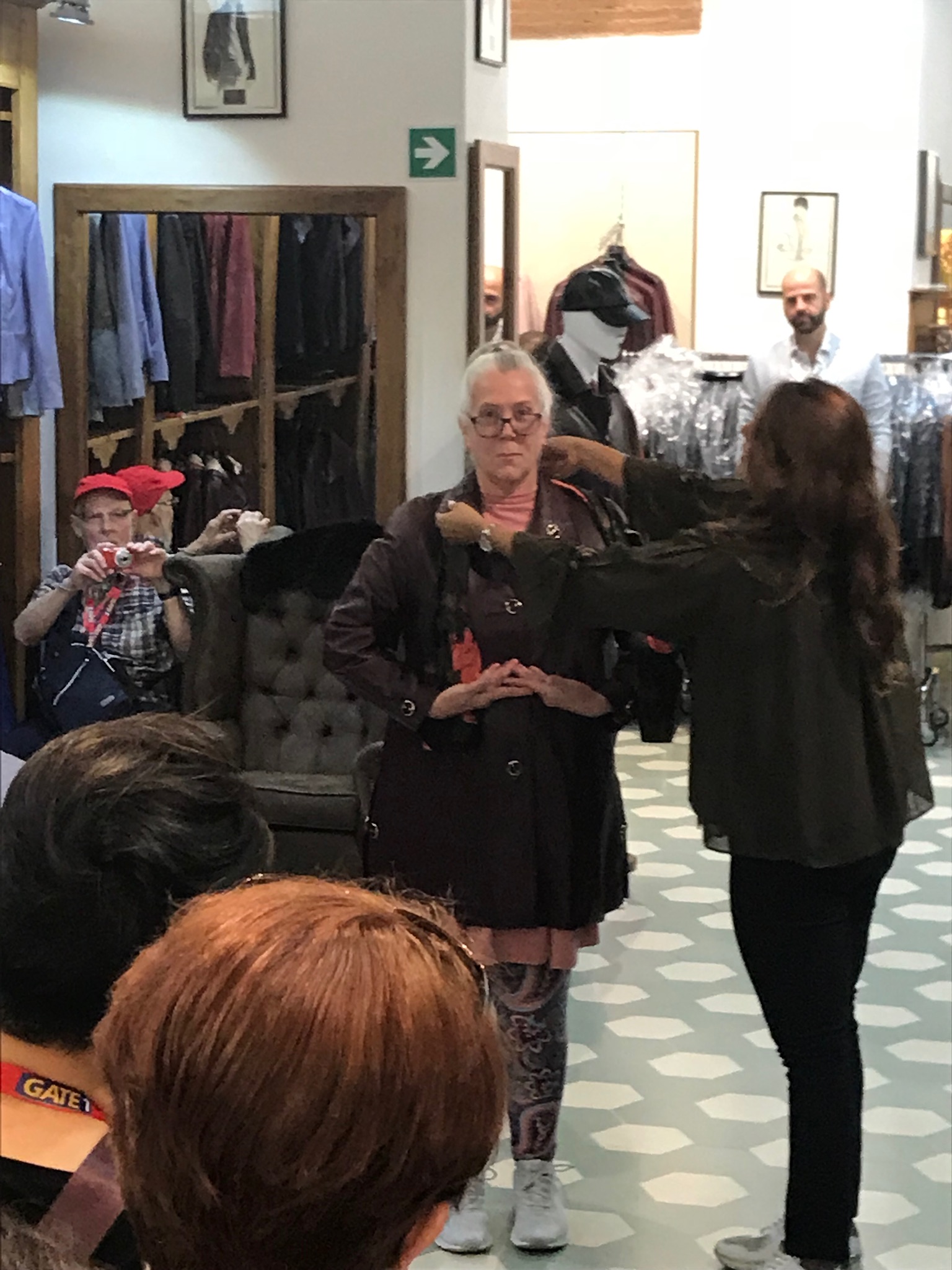 I am not going to belabor the point, but Gate 1 Tours seems to focus a lot on shopping, and we tend to focus on art and architecture. (It would be great to focus on music as well, but there is absolutely no time for a concert.  What are you, a cultured snob or something?)

So while the group was exhorted to go shopping, we chose to visit Santa Croce instead: 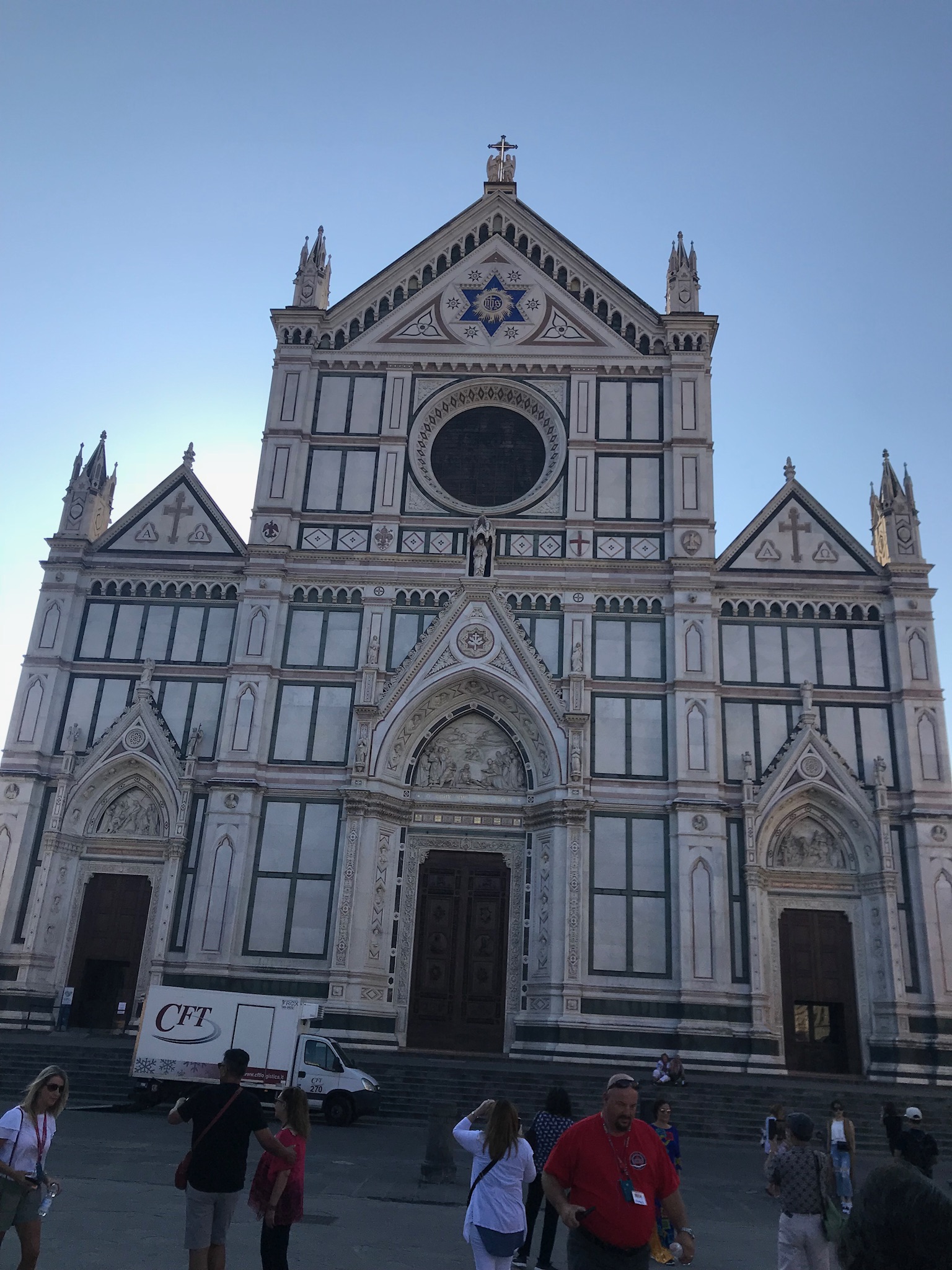 (By the way, our iPads and iPhones are miracles, but doing this on an iPad and not my laptop is an incredible pain.  It takes me three times as long to insert a photo as it does to write a paragraph.  Lesson learned; next time, it’s the laptop, no matter how cumbersome it is.)

Santa Croce is an exquisite Romanesque cathedral, and there’s a crowd of greats buried there, definitely worth the visit.

The nave, looking back towards the entrance: 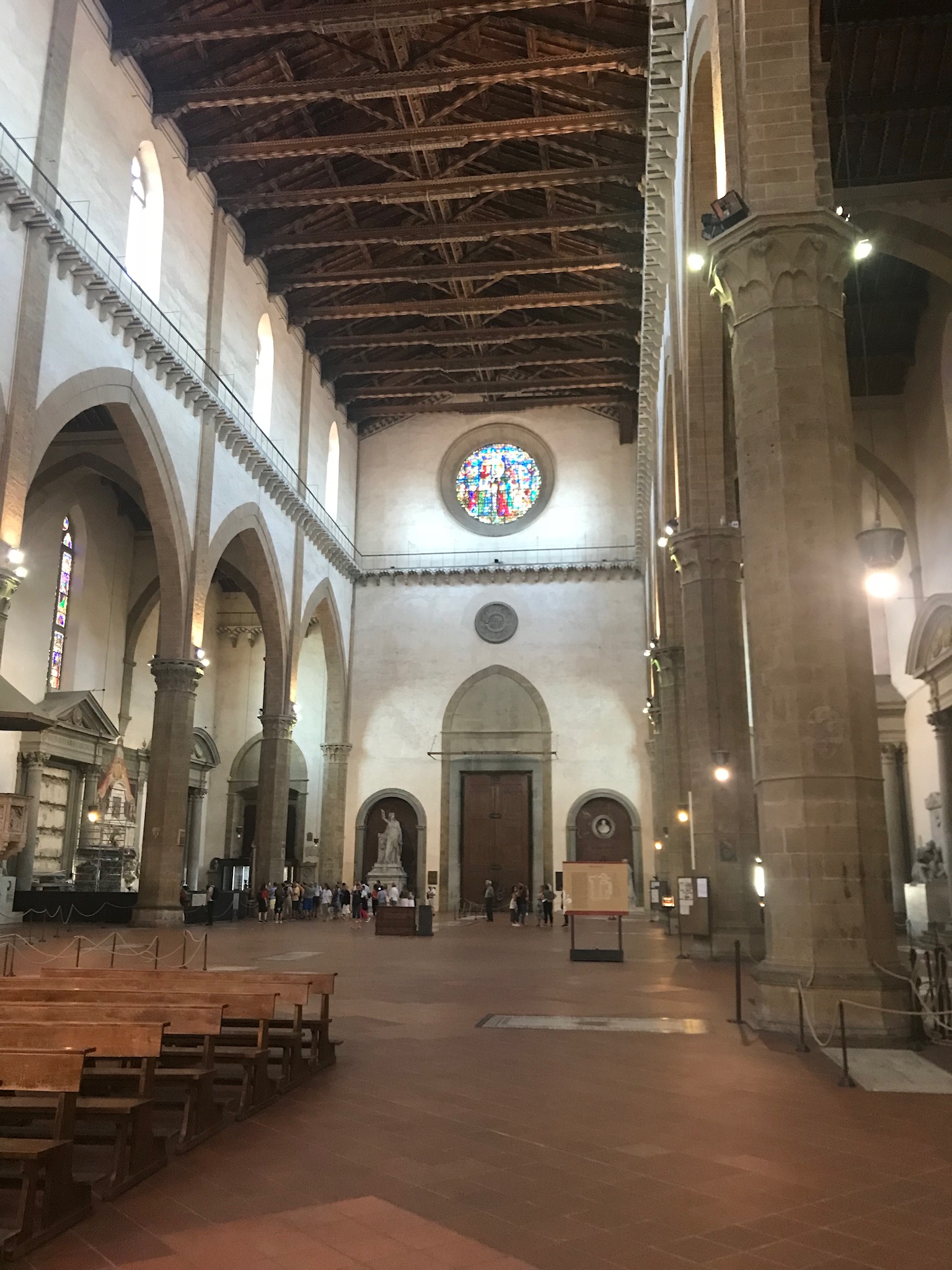 Looking toward the altar: 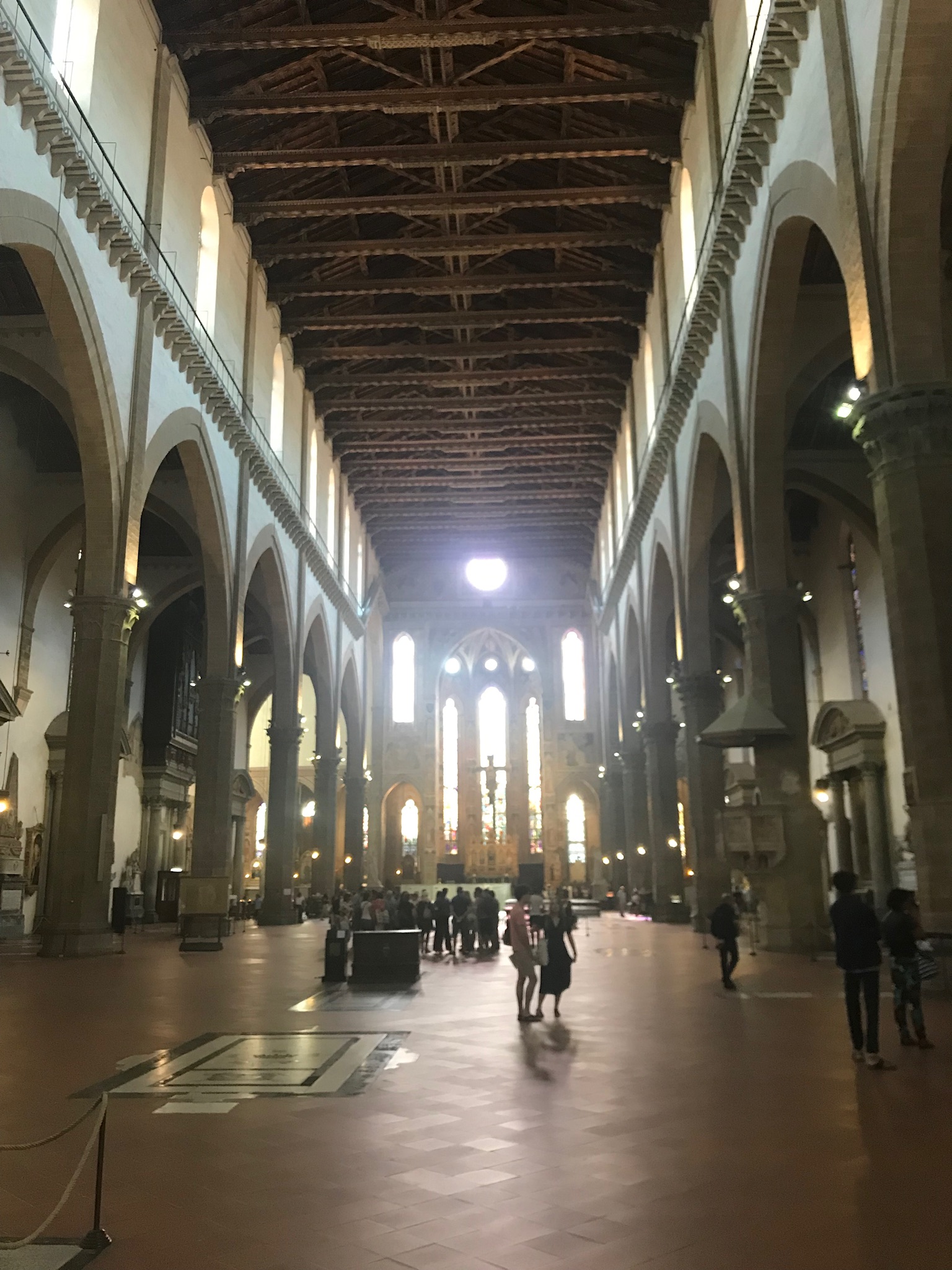 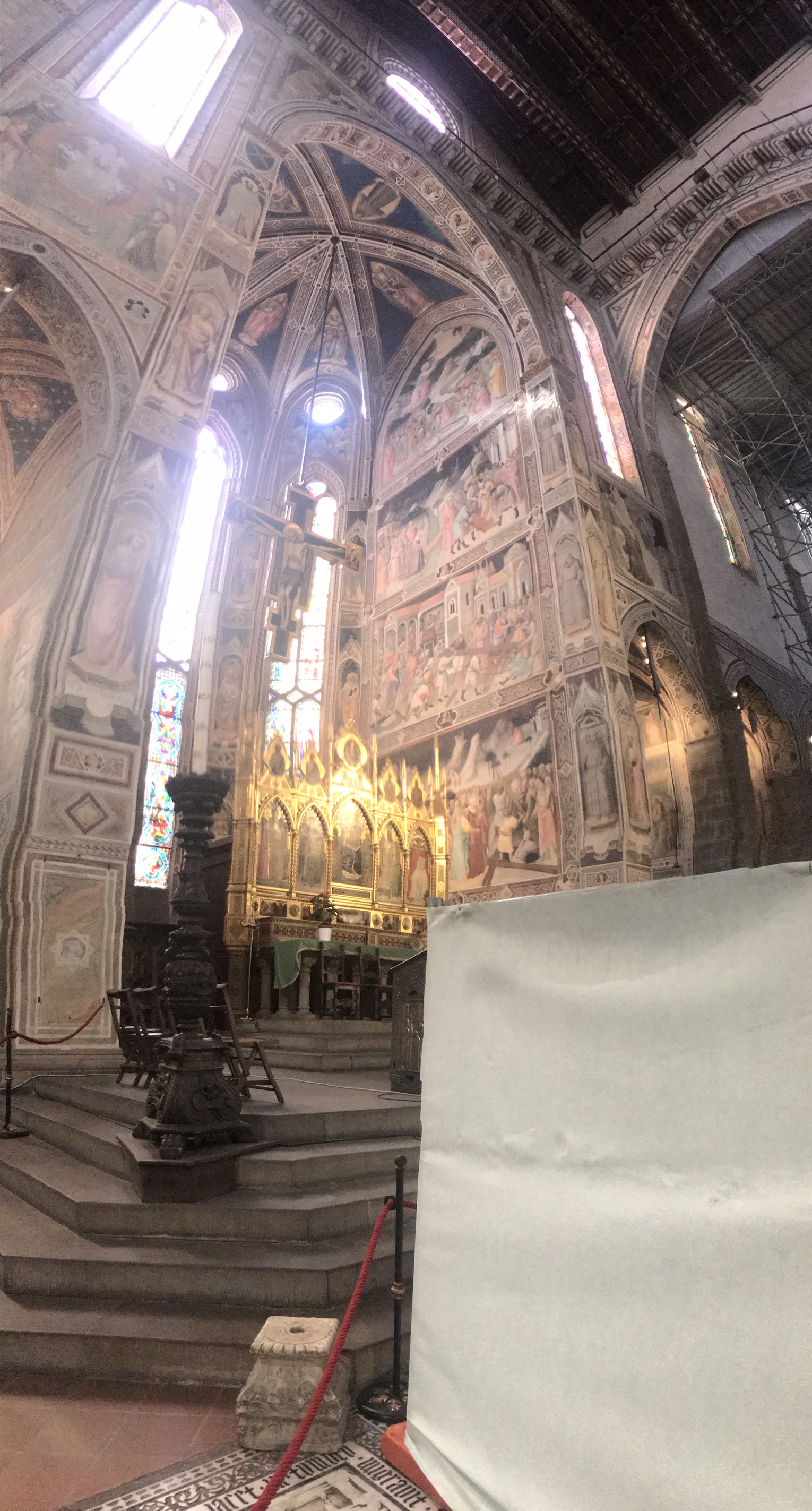 The frescoes in the choir were stunning:

One of the transept chapels: 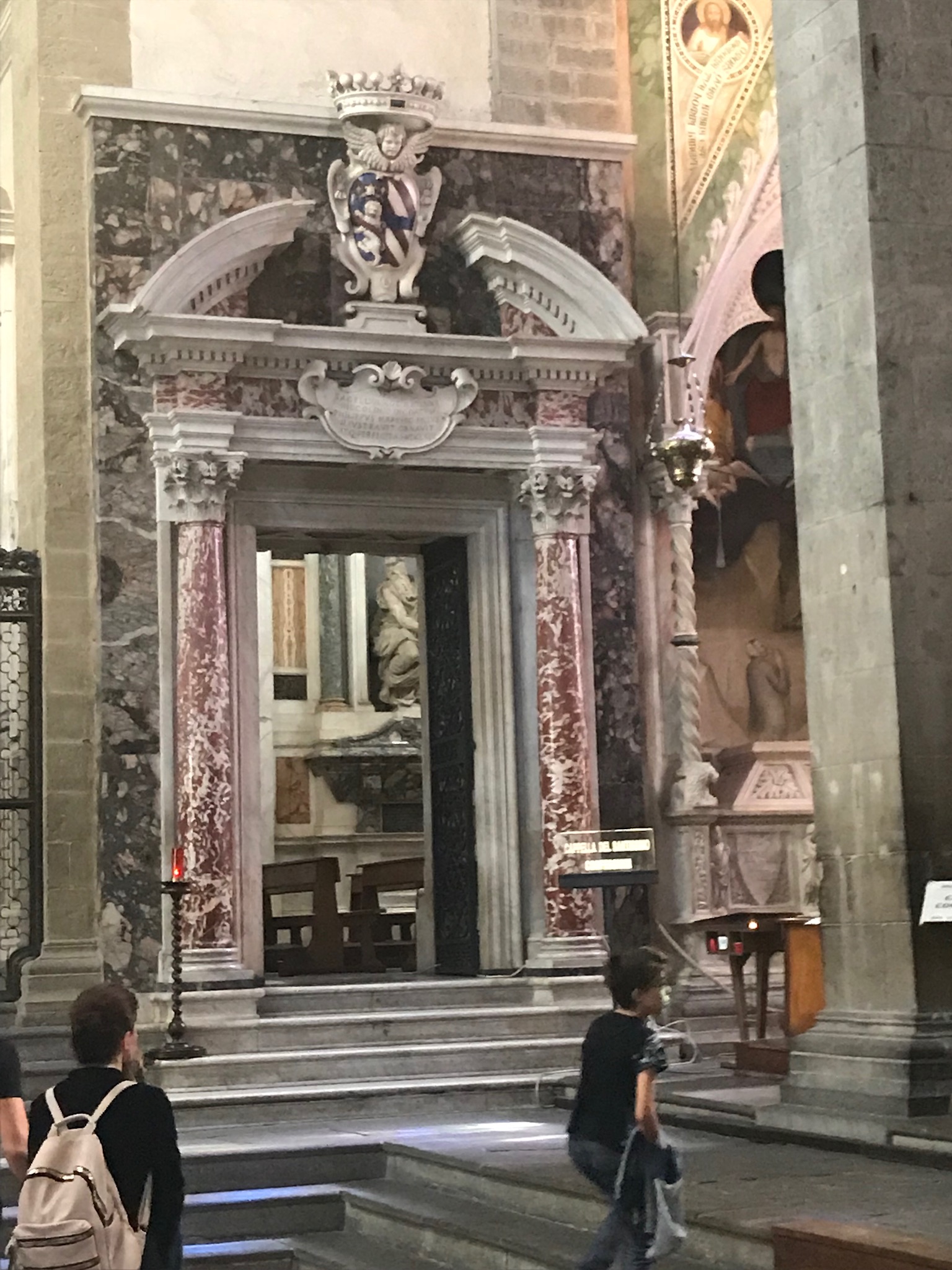 It was not open to tourists; it was reserved for prayer.  It’s often difficult to remember that these are still places of worship, not just architectural monuments. Imagine First Baptist with its doors open and busloads of tourists strolling through, snapping photos. Of course, First Baptist does not have multiple worship services every day.

A side chapel along the apse: 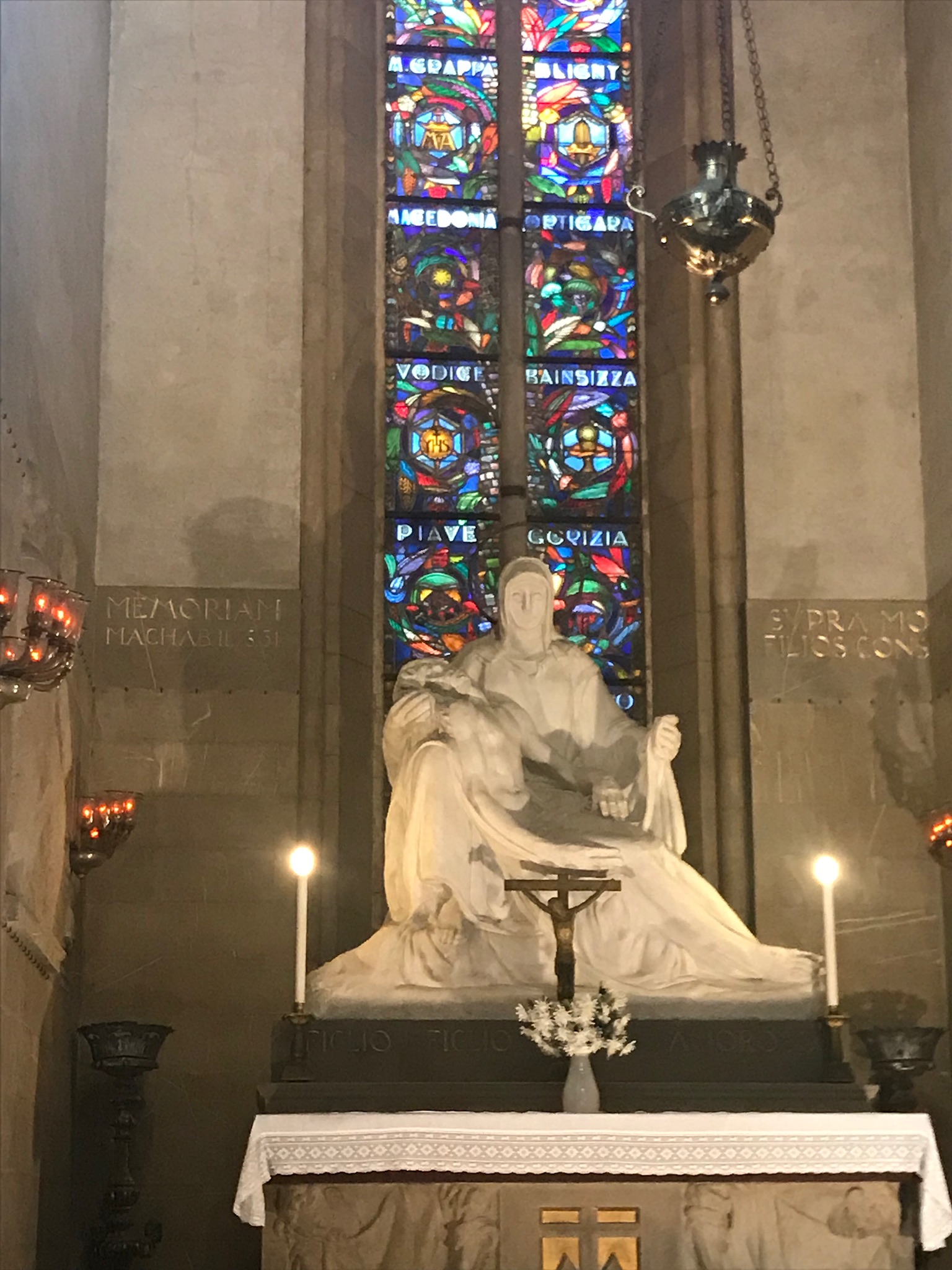 We think of these great churches as works of art, complete and perfect, but of course they—like all works of art—change as they grow. Here’s where a chapel used to be, with its frescoes on the wall, but it’s been replaced by a couple of memorials, and its frescoes are now just remnants. 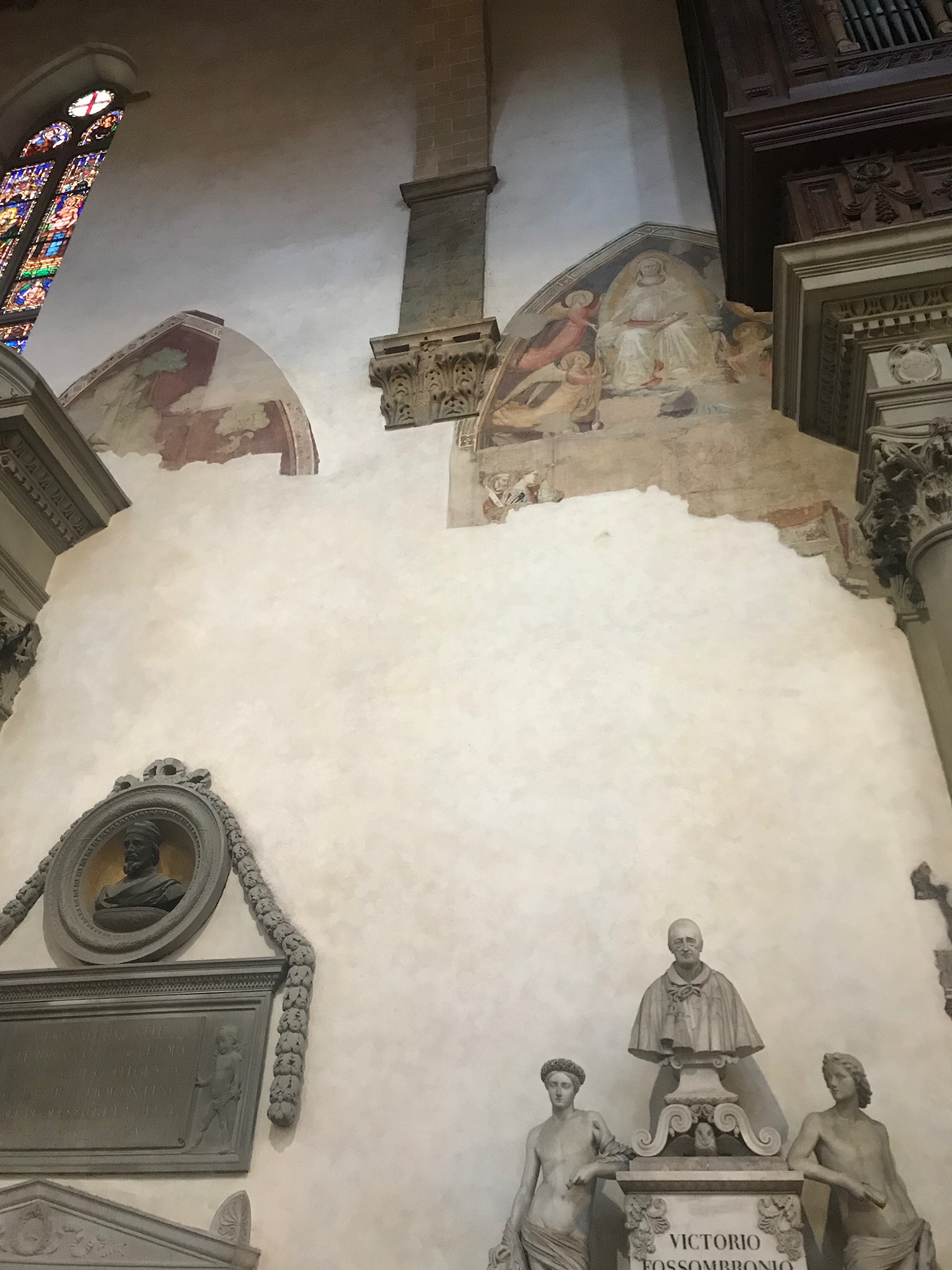 Who all is buried here? 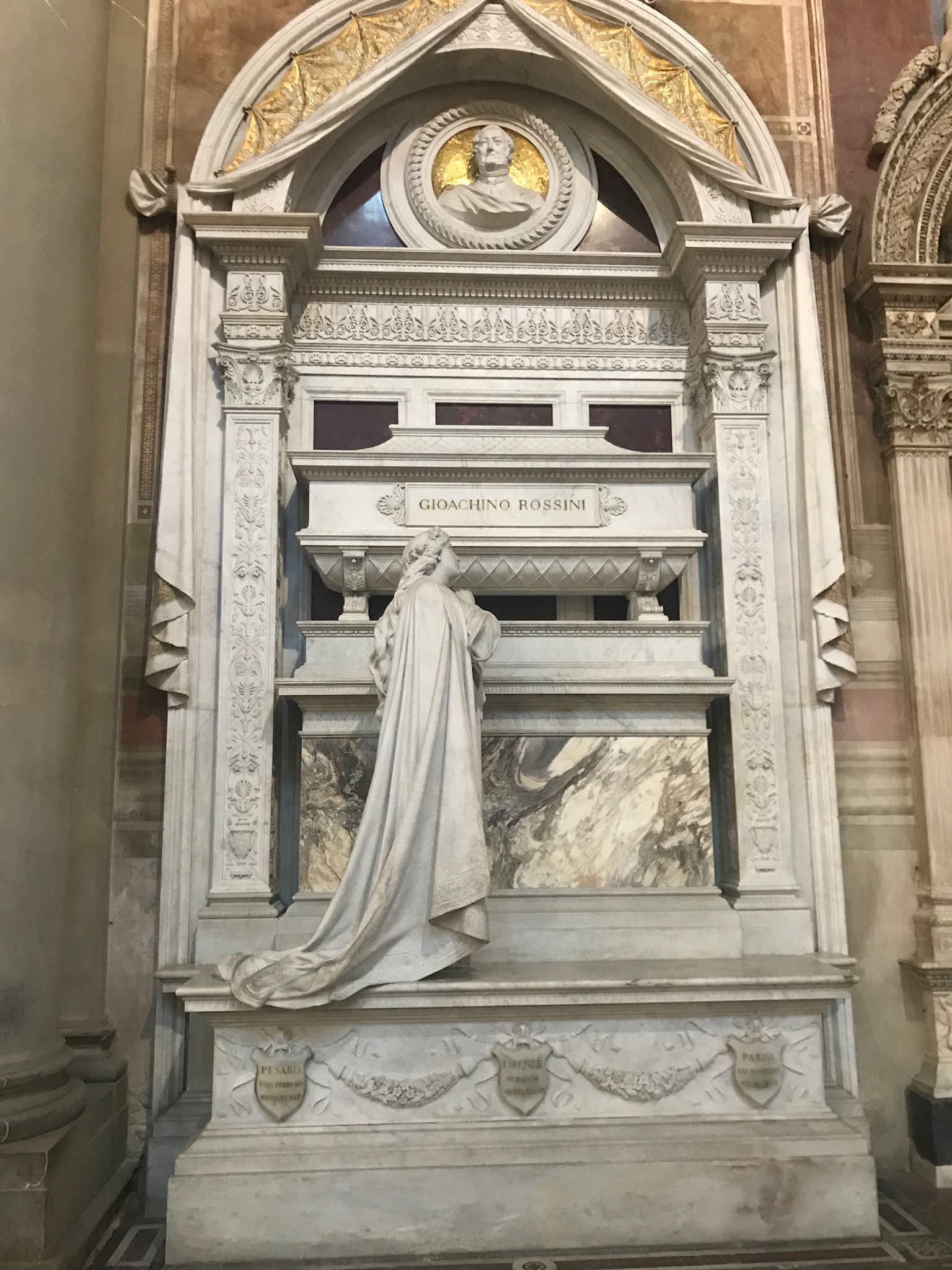 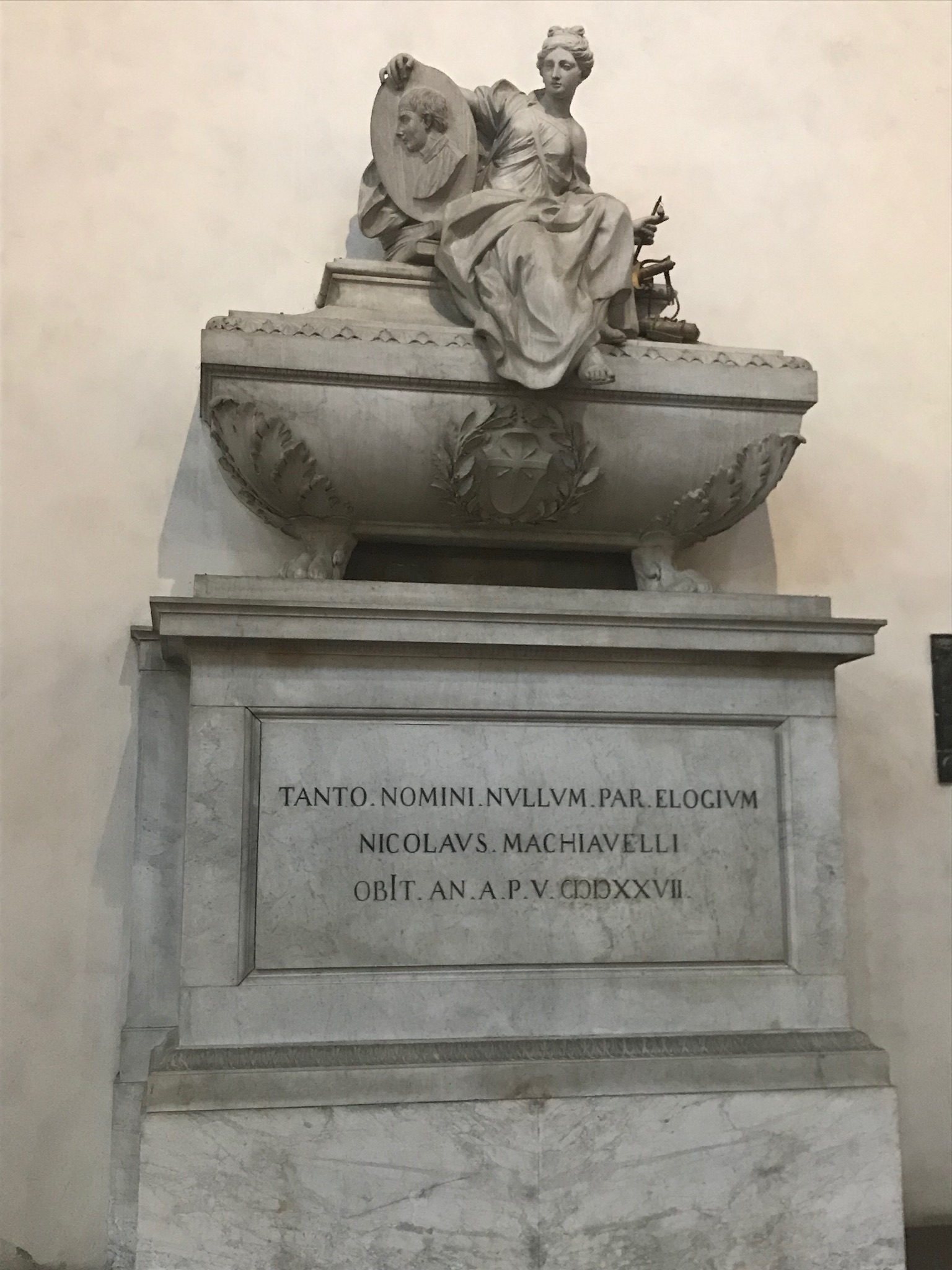 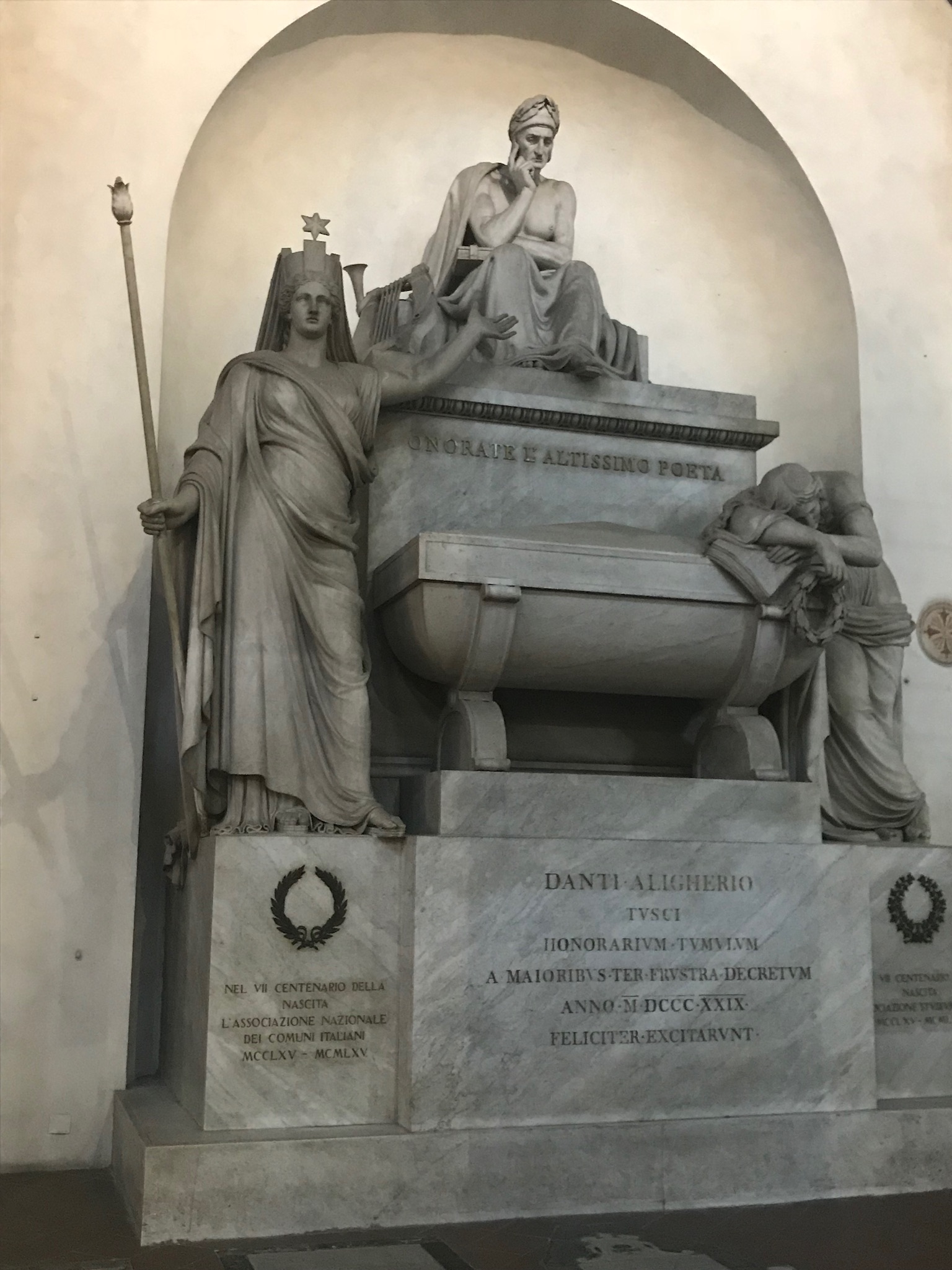 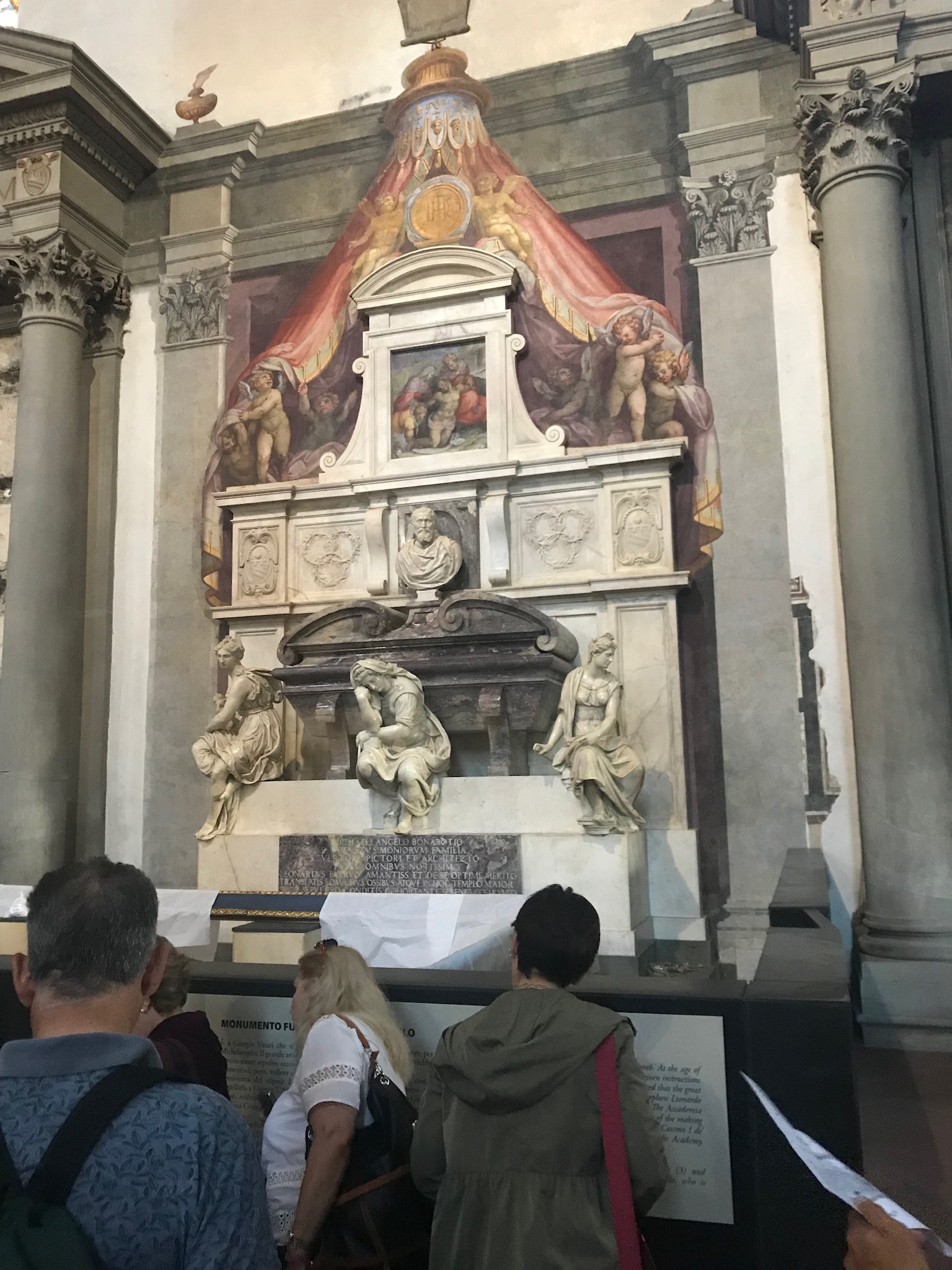 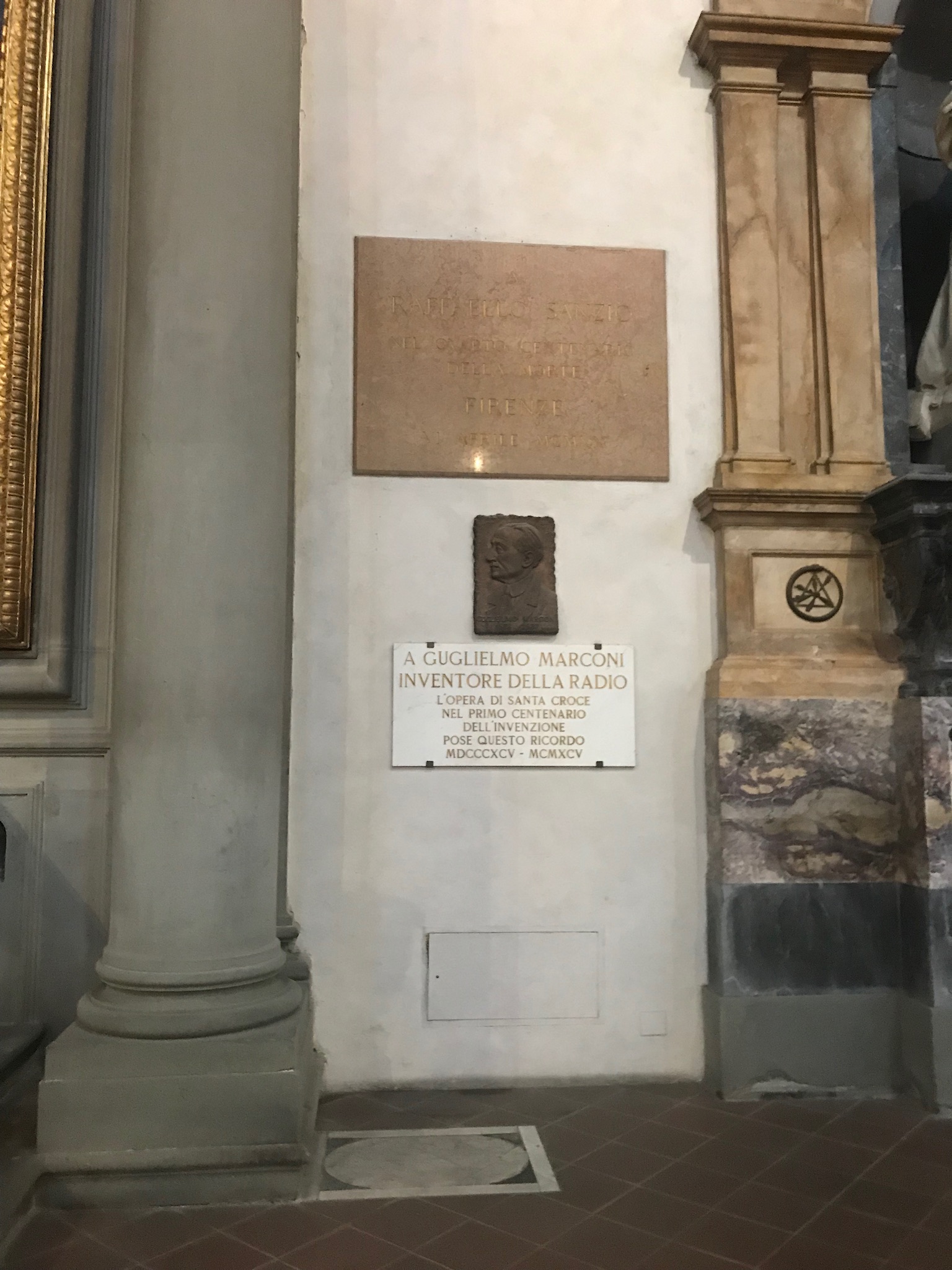 That’s an impressive count of one-namers.

Leaving the cathedral, there’s a courtyard designed by Brunelleschi… 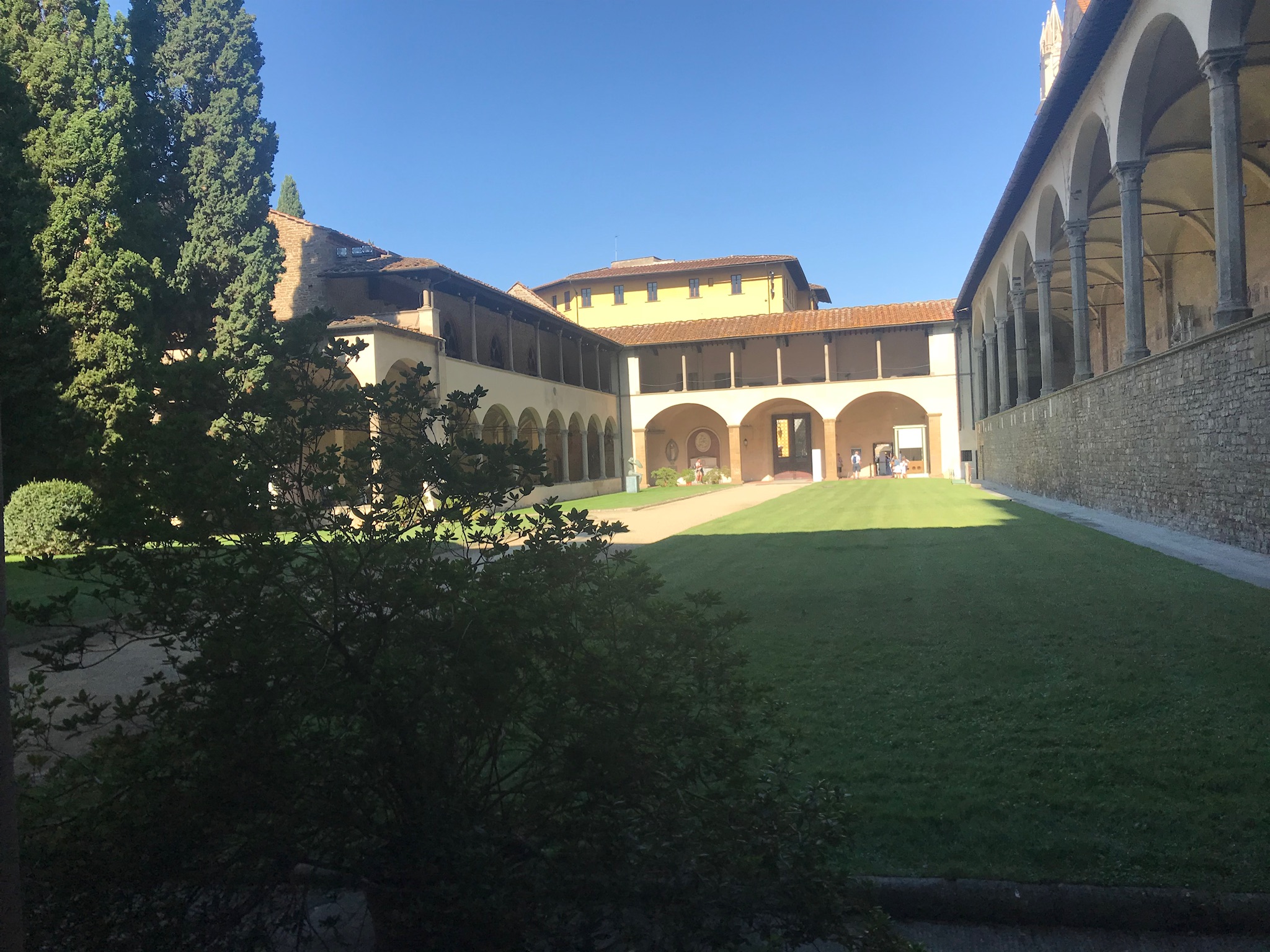 … as well as a chapel by Brunelleschi: 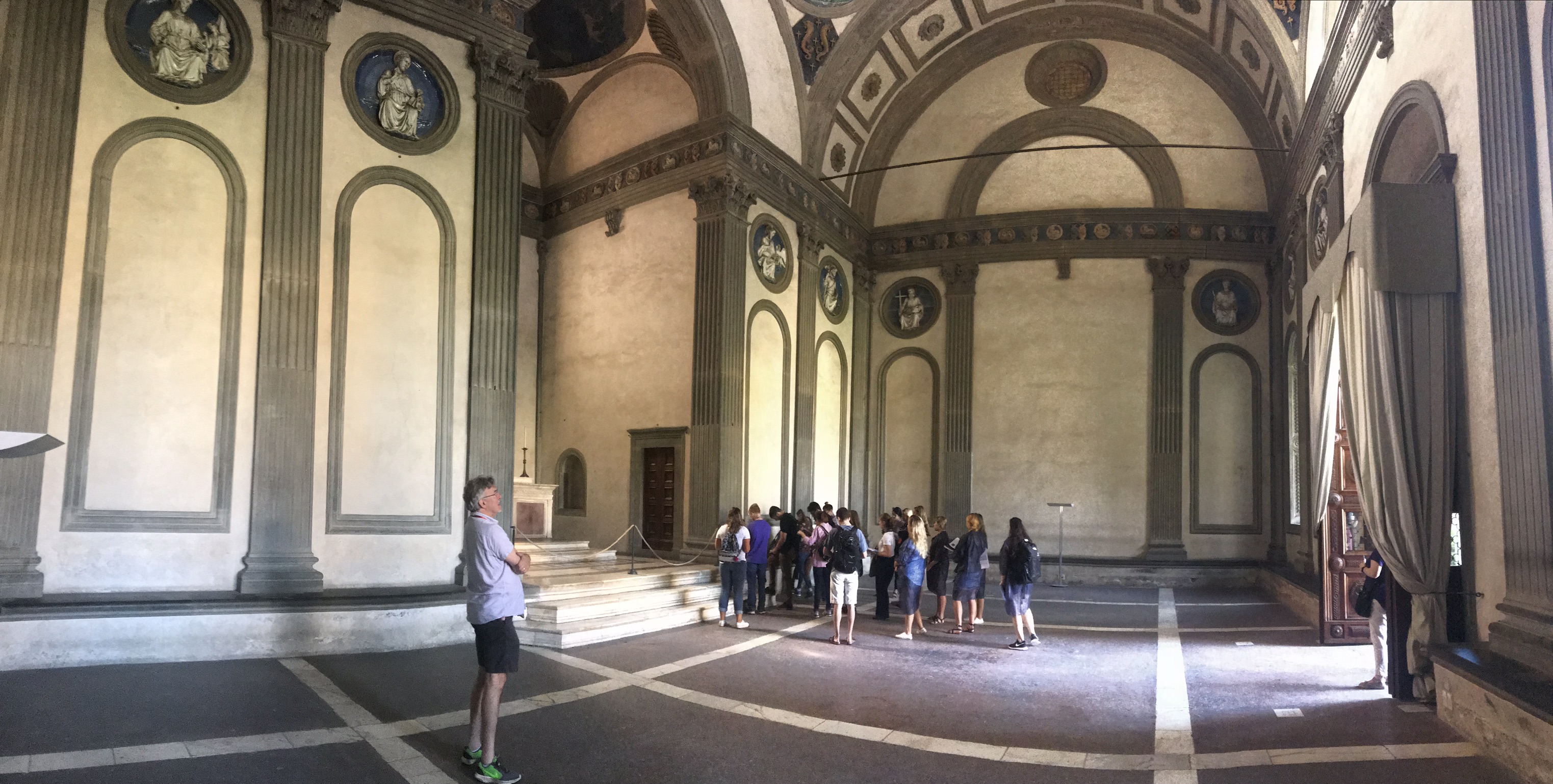 Finally, a third chapel, this one focused on the restoration efforts after the devastating flood of 1966.  The Arno River overflowed its banks to a high of 22 feet in the Santa Croce.  Millions of books and artworks were destroyed, and the city faced years of recovery. 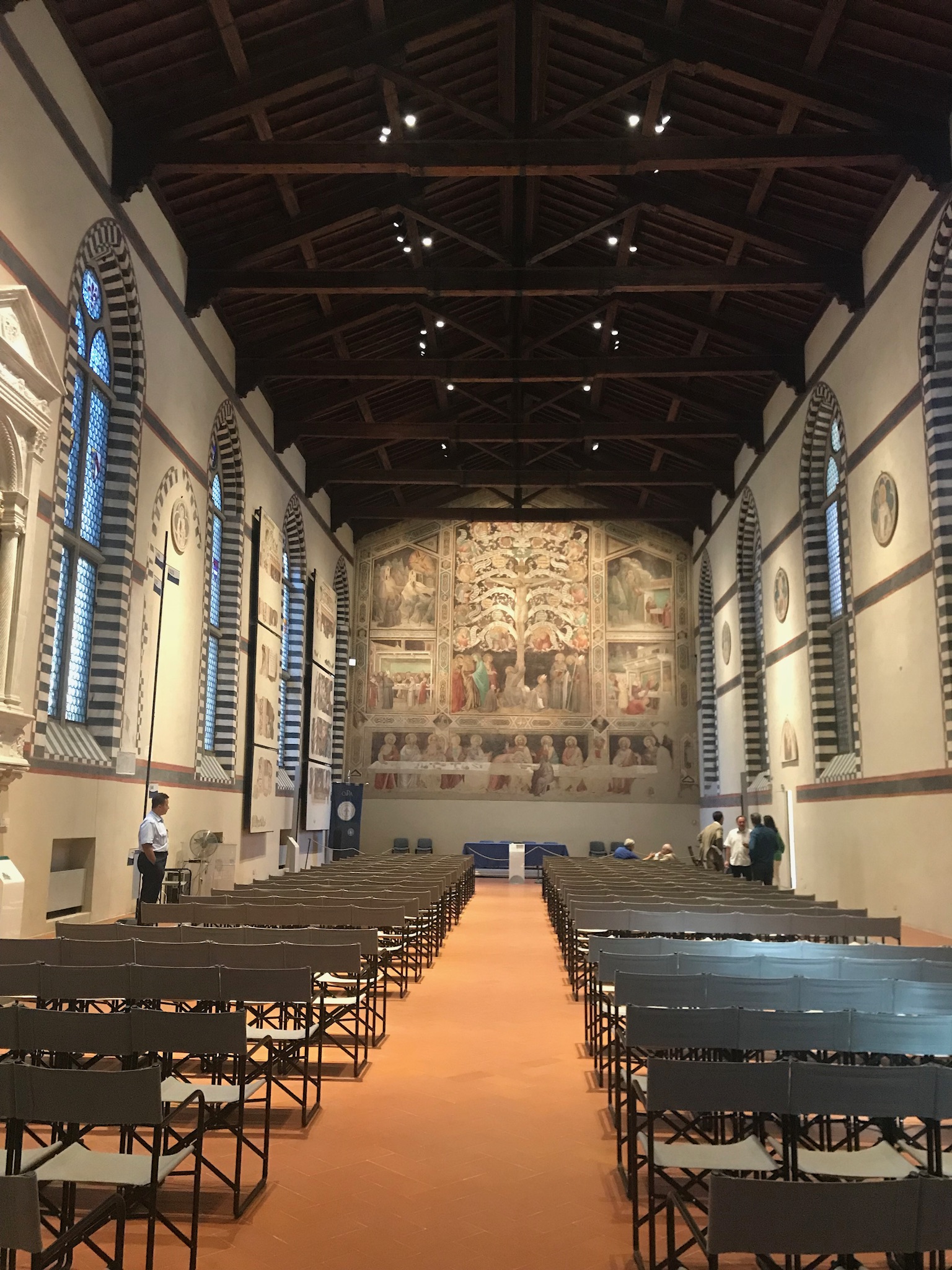 At this time, we rejoined the tour in the plaza as we all assembled to meet Ignazio. We walked over to the Palazzo Vecchio, i.e., the town hall. Florence vacillated between being a republic and a duchy for years, the Medici family being the main contenders for leadership. 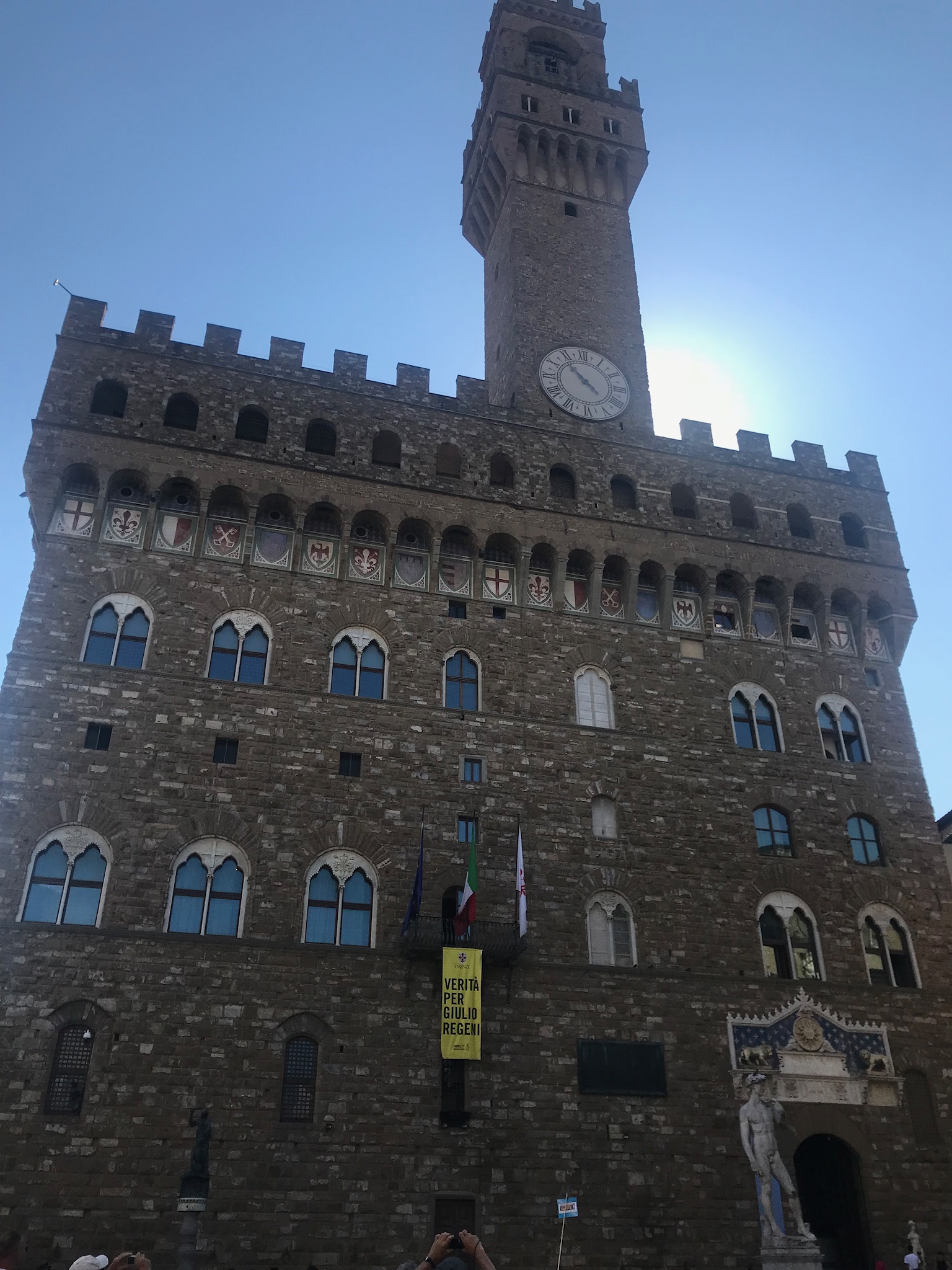 To the left of the Palazzo, a fountain with Neptune (under restoration) which the Florentines call ‘the big white thing.” (They haven’t been fans for 450  years, apparently.) 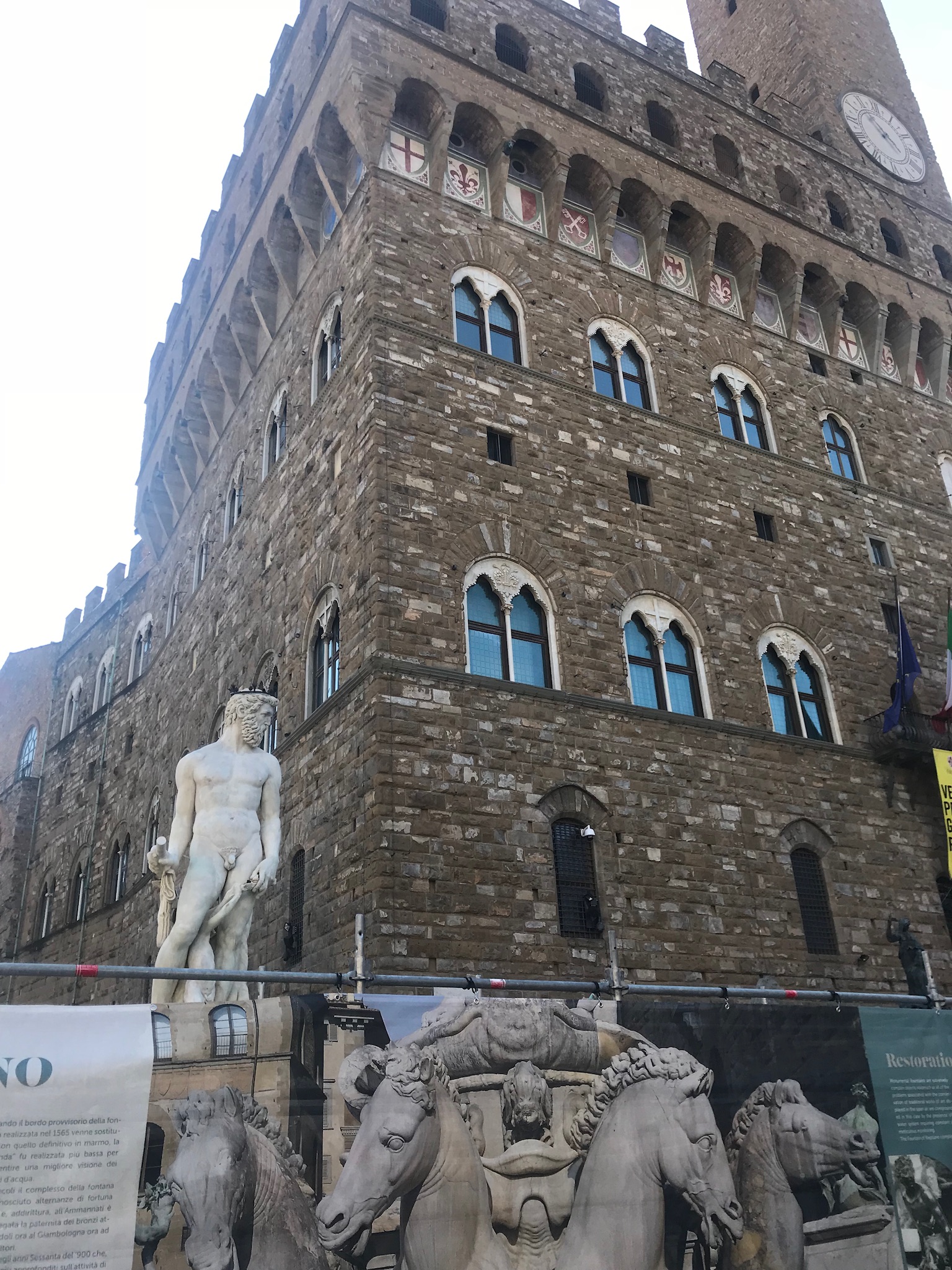 And of course, standing at the entrance, Michelangelo’s David, albeit a copy: 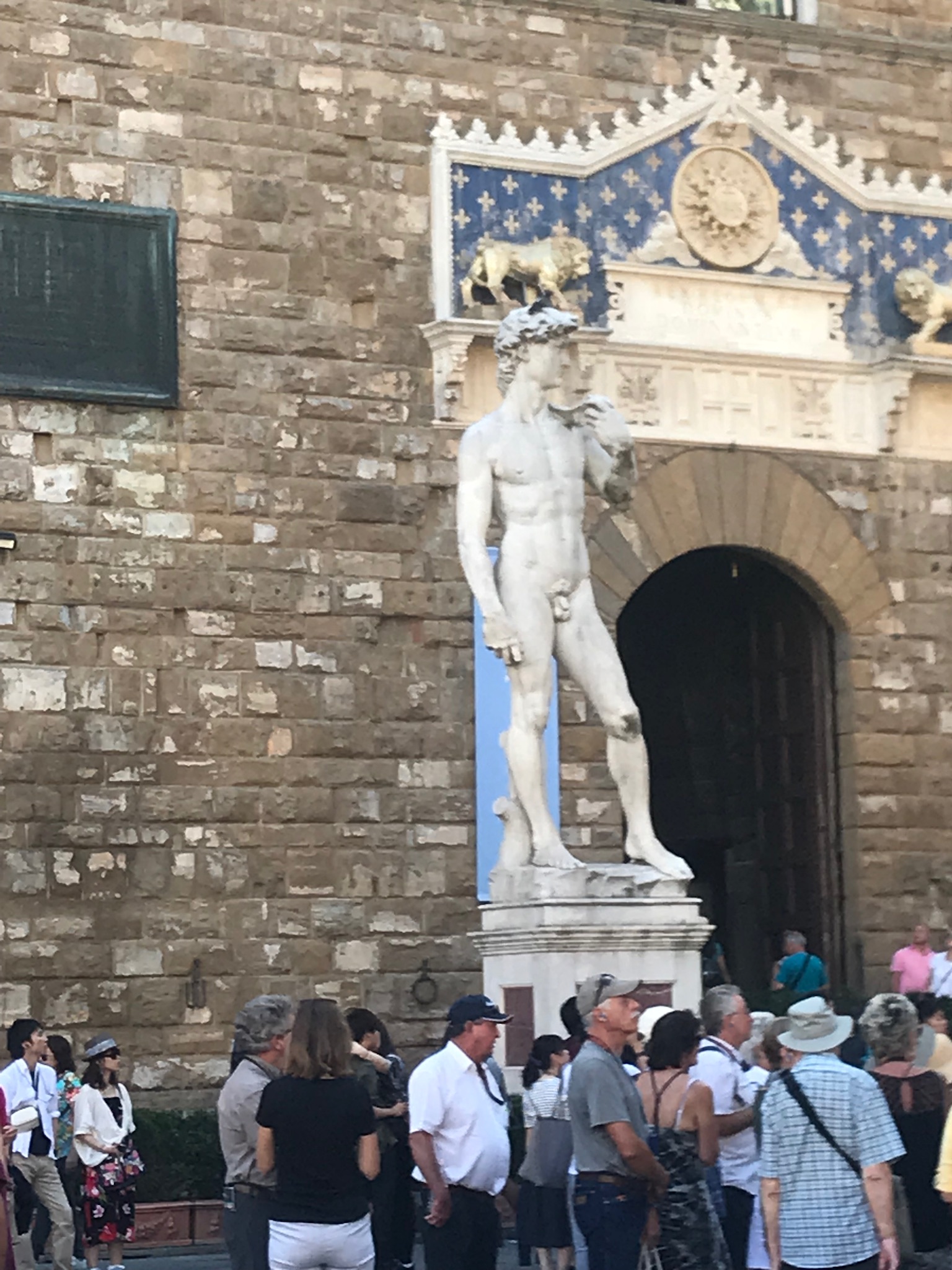 To the right of the square, a loggia with equally famous works: 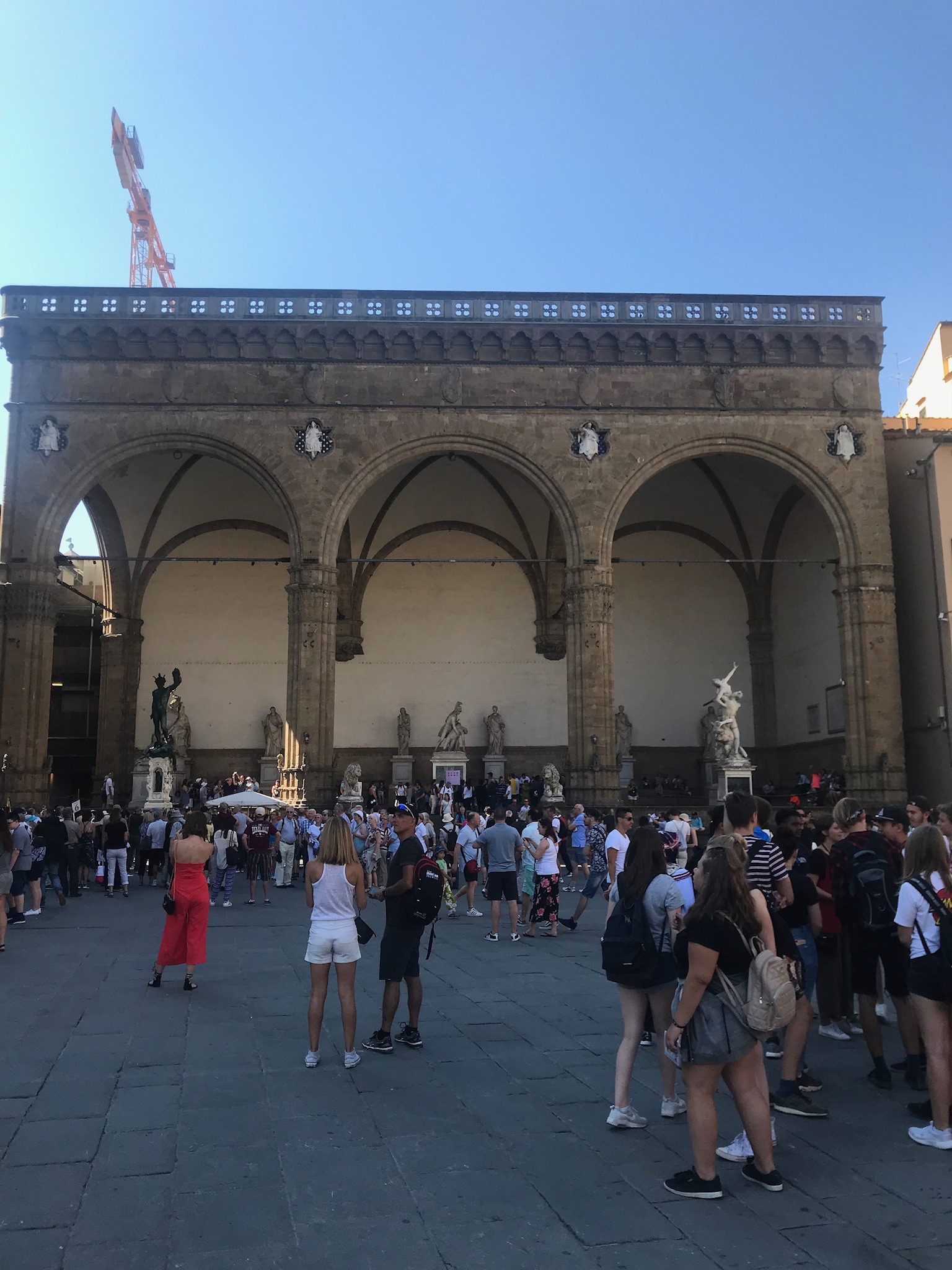 Including a copy of Donatello’s Perseus with the Head of Medusa: 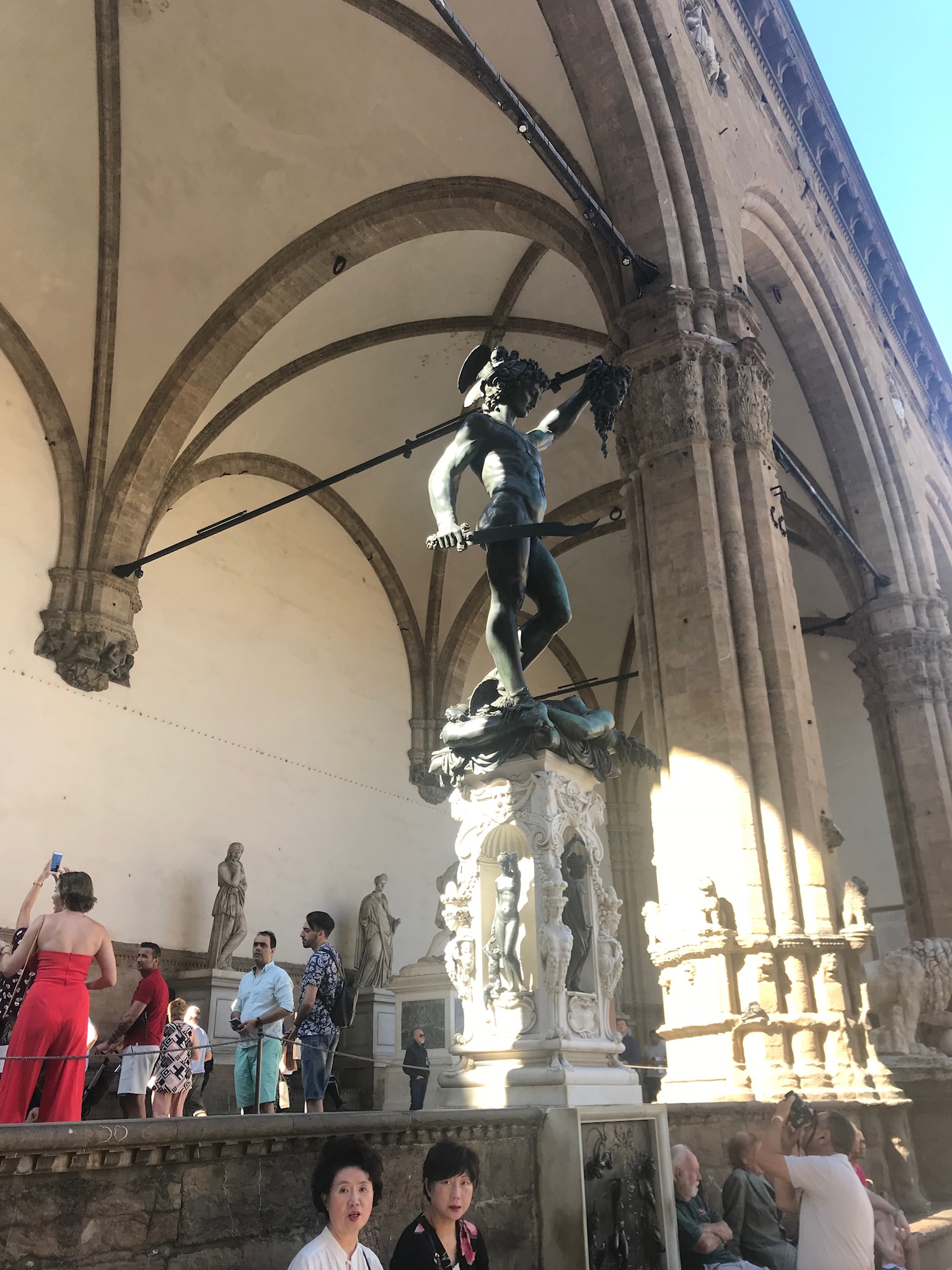 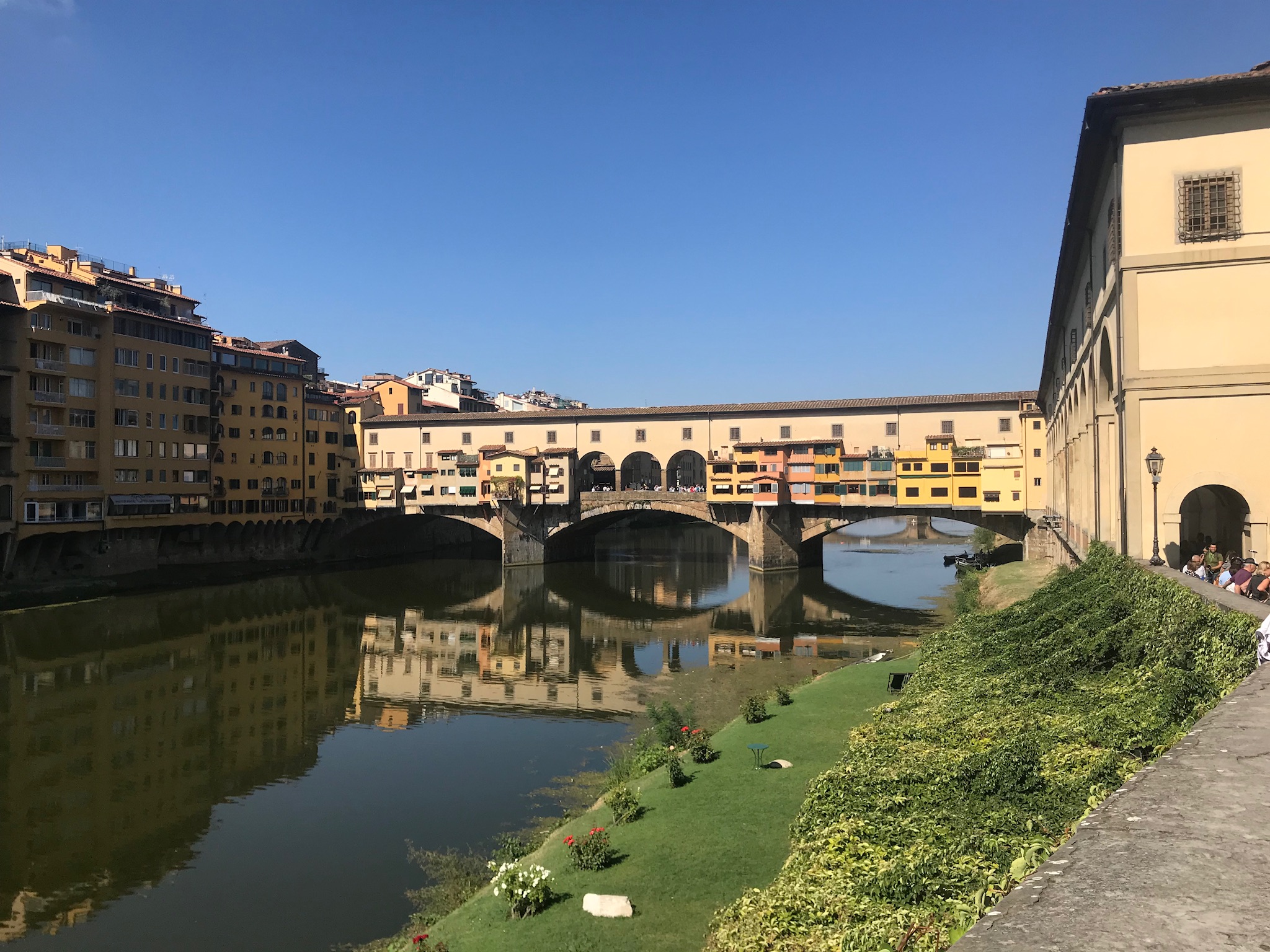 And here we see a gentleman sunning himself on the greensward.  Clearly a member of 3 Old Men, even if he doesn’t realize it. 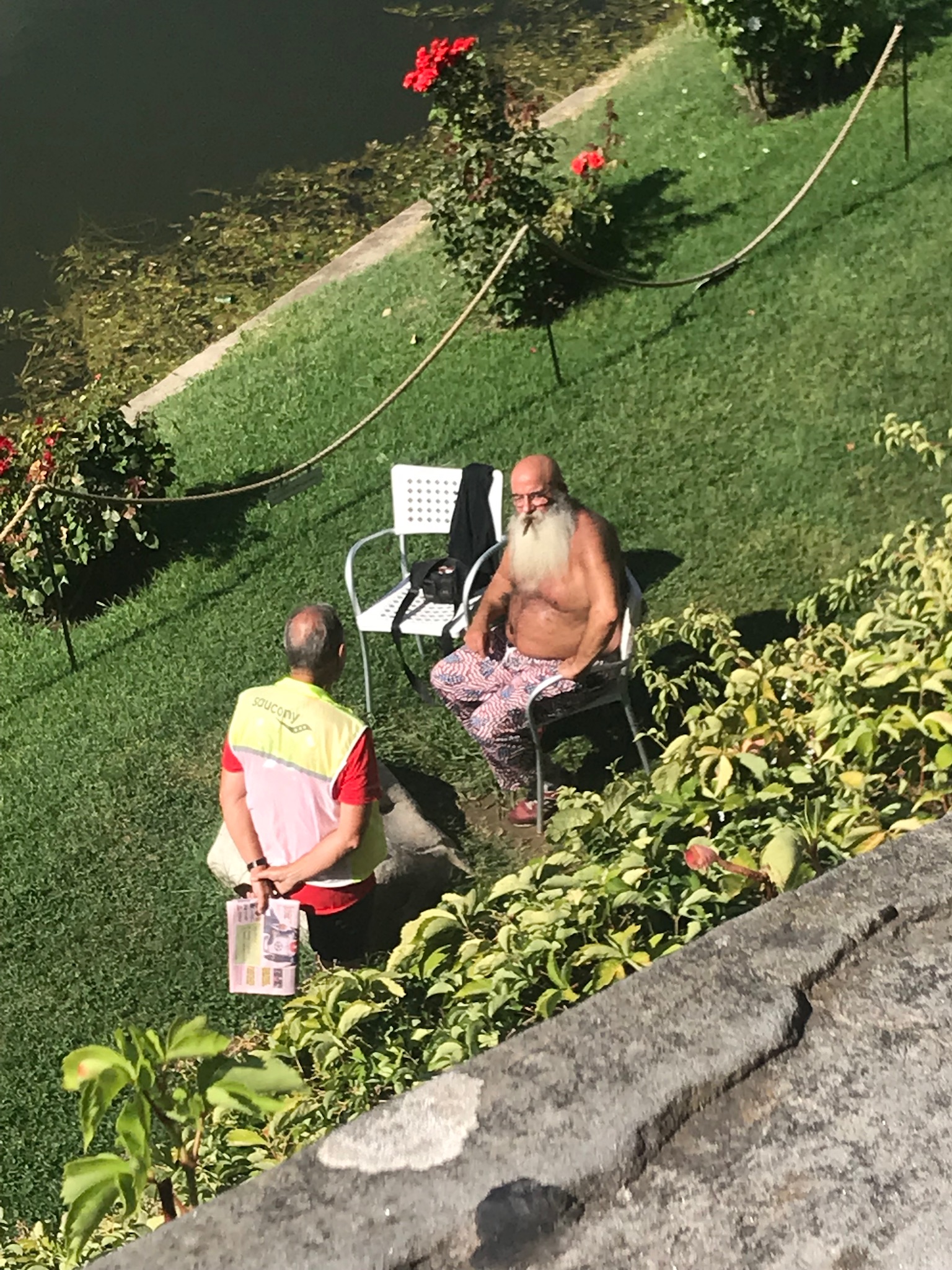 Now we’ll take a break and come back in a moment to Il Duomo and the Uffizi.