So yesterday afternoon, the Current Disgrace tweeted this: 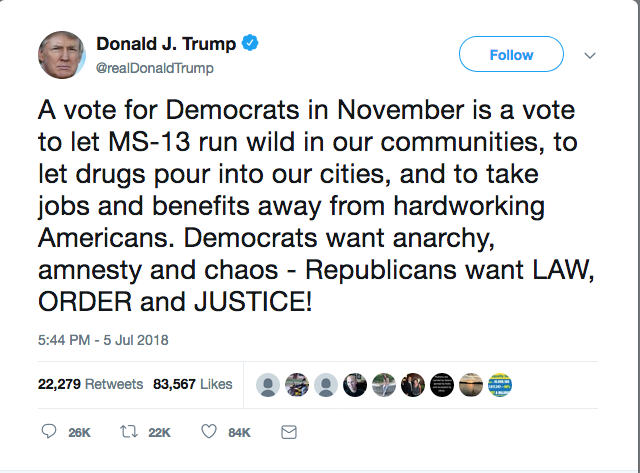 I am not going to get into all the LAW, ORDER [,] and JUSTICE that the Republican Administration is doing all over the place at the moment.[1] Rather, allow me to address the premise of the direct intravenous shot of fear and anger he’s giving his amygdala-based followers.

And taking “jobs and benefits away from hardworking Americans”? What the hell is he talking about?[3]

Does any of that make any sense at all, if you stop to think about it? We will all pause to allow you to stop and think about it.

NO, IT DOES NOT MAKE ANY SENSE AT ALL. Whatever the Democratic Party’s political goals are, they do not include destroying this country. THINK ABOUT IT.

Having given it some thought, the amgydala-based lifeform’s brain, in fear of being cut off from its oh-so-intoxicating hit of fear and anger, does a record scratch: “But… OKAY THAT DOESN’T MAKE SENSE BUT IT’S STILL TRUE!! MAGA!!!!!”

[1] But I will mention that a man who doesn’t use the Oxford comma is a moral monster who should be shunned in any case.

[2] Like in Honduras or El Salvador, which REFUGEES ARE FLEEING FROM TO OUR BORDERS, KENNETH? But let that pass.

[3] I have to assume that he is not talking about his own trade wars — soon to bring job losses near you — or his own party’s budget — which, since it’s ballooned the deficit to trillions, now needs to be “balanced” by cutting your Social Security benefits.