As Sinclair Lewis did not say, “When fascism comes to America it will be wrapped in the flag and carrying a cross.”

I was strolling down the street to fetch a pizza yesterday, and for some reason this struck me: 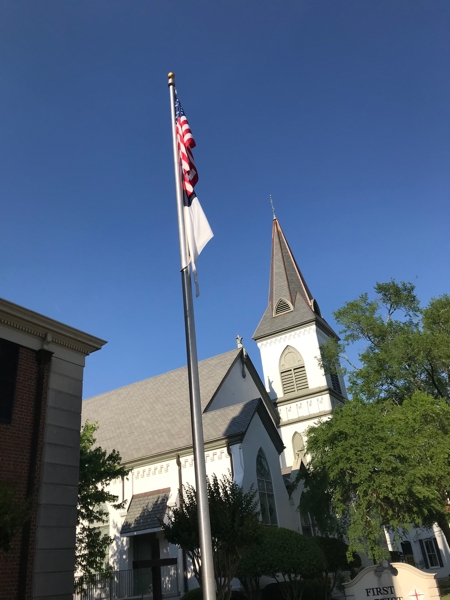 I thought to myself, “Why is the Baptist church flying an American flag?”

Let me be clear: I was raised in that bathwater, so I know that the flag/patriotism/jingoism has long been an item of worship there.

And since I was raised in that bathwater, I also know that the origins of the Baptist faith, indeed of Christianity in this country, would teach that the church owes no allegiance to the government. Their authority does not derive from the government, nor should they seek the imprimatur of any earthly power.

But they do.  Especially since the 1970s/80s, Christianists in this country have been increasingly strident about how they and the U.S. government are one — or should be. They want laws that protect them — and only them — or that push their “morality” onto the rest of the population.

And now, with the Current Embarrassment, they find themselves in an appalling bind, tied to a man whose lack of morality is entire and whom they must continue to endorse and wink at if they want to continue to cling to power.  For that is what this is all about: they fly an American flag because they see no distinction between themselves and the government.  They want the power to dictate their rules to the rest of us.  They reject the notion that they are only one part of a diverse nation: they are America, the real America.

Then they express bafflement when the rest of us describe them as bigots and racists, cruel in ways that would appall any truly devout person of any faith, exclusive and prohibitory, unkind, ungenerous, and fascist.

If you’re a church-goer, before you object that your congregation is not like that, that your gang is Christ-like, I ask you: do you fly the American flag? Is it, like the Baptist example above, above the “Christian flag”? Why is that? Yes, it’s the official flag code that the U.S. flag flies on top, but what have you to do with the official flag code? “Render unto Caesar…”? I’m not sure that Christ meant your allegiance.

Think about that the next time you Pledge.